I’ve been  living on the water for one week now.  The weather has been beautiful, the coastline of Maine stunning!  On the trip up Bob saw a whale and a big basking shark. Together we’ve seen seals, and lots of shore birds: egrets, herons, ospreys, storm petrels.  Yesterday I saw eider ducks for the first time!

During the first few days on board I finished this sweater which is a monstrous failure! 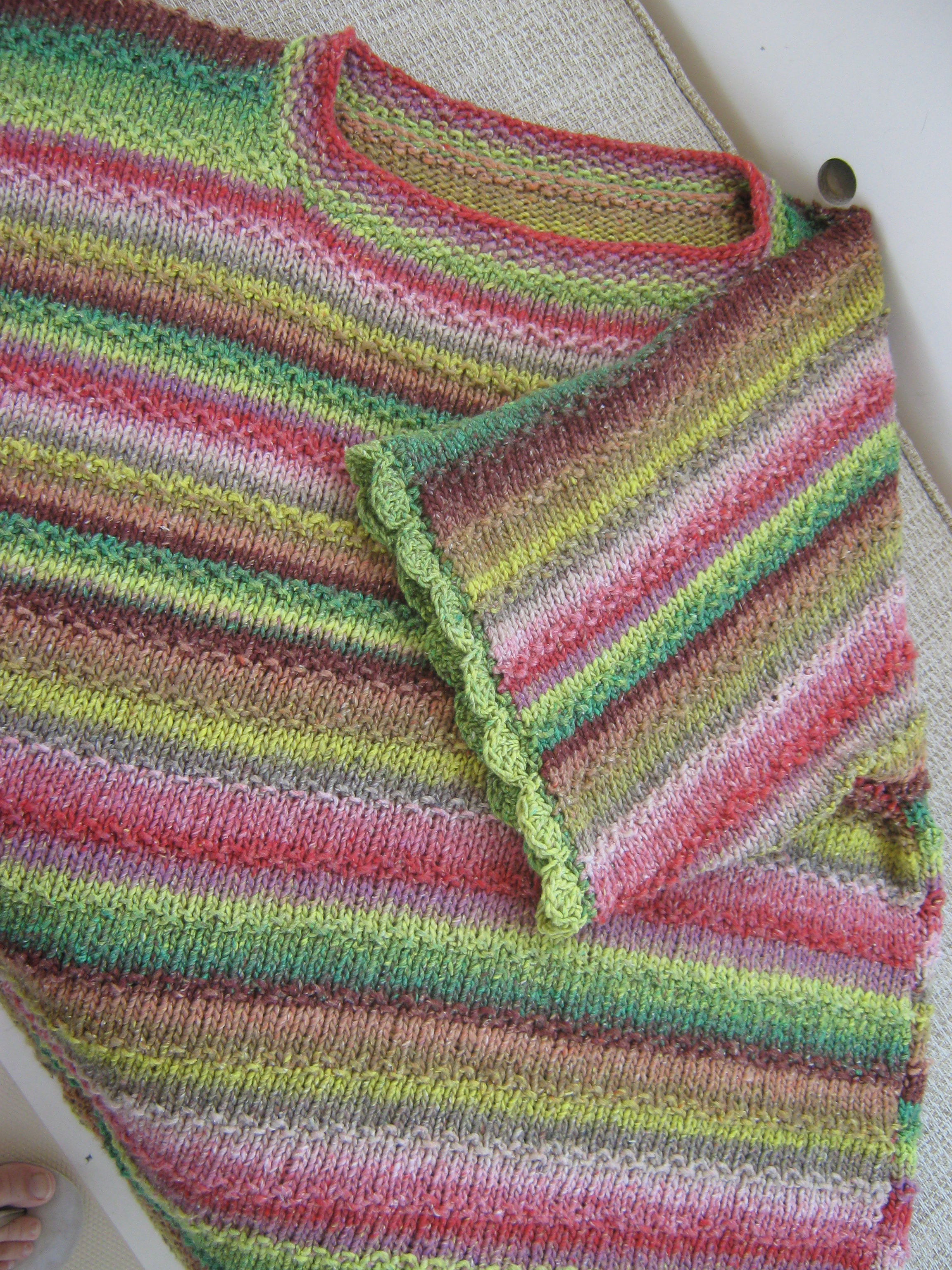 So, what went wrong?  Well, maybe the yarn is just too bright for horizontal stripes?  …especially in larger sizes!  Although it was a very quick project to knit, no knitting project goes quickly enough not to feel a sharp pang of anxiety when it proves to be a failure!

Also, here is the photo on the pattern: 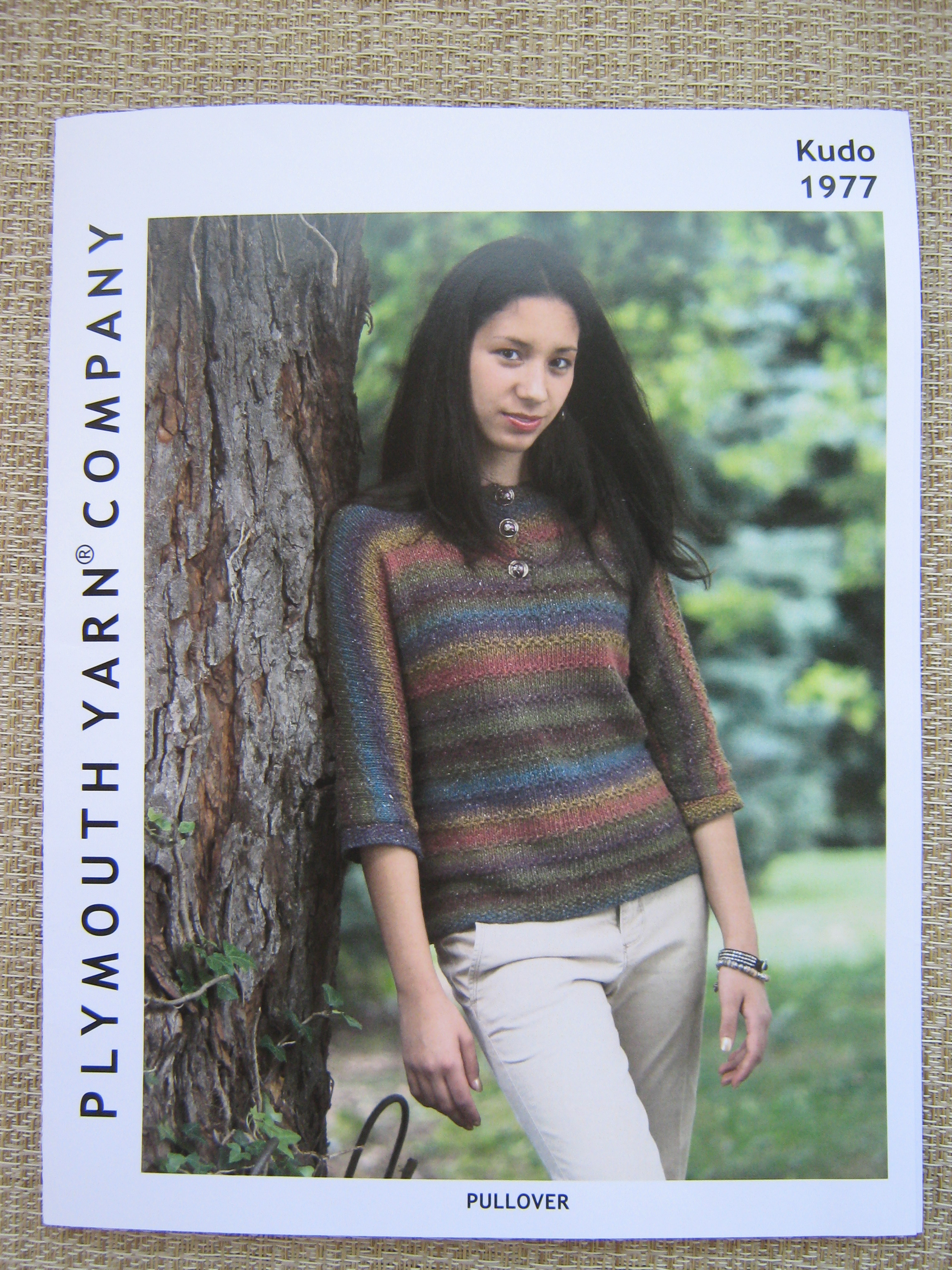 My biggest gripe is the look of the sleeves in the cover photo.  They are clearly 3/4 sleeves.  The pattern knits up as short sleeves.  The pattern does say that if you want shorter or longer sleeves you must adjust your stitch number to achieve this.  The pattern says that the stitches called for in the instructions will result in elbow length sleeves, but it does not say whether that includes the seed stitch border.  To me the sleeves in the cover are elbow length before the seed stitch border was added, so I presumed that the pattern photo showed the sweater knitted to the specifications in the basic pattern.  Wrong. The finsihed sweater looks decidedly dumpy with the short sleeves.  I tried the seed stitch border and didn’t like it.  So I ripped it out and tried a crocheted scallop, also dumpy, as the photo shows!  I cannot just do the sleeves over, making them longer, since the entire sweater is knit in one piece, from the bottom of the front all the way to the bottom of the back, increasing for the sleeves and working the neck as you go.  This would basically mean knitting the sweater again from almost the beginning.  A little note in the instructions saying that the sleeves in the photo had been lengthened would have helped immensely!  But still, I don’t know if I could carry off those bright horizontal stripes, so I’m not too enthusiastic about doing this sweater again anyway! 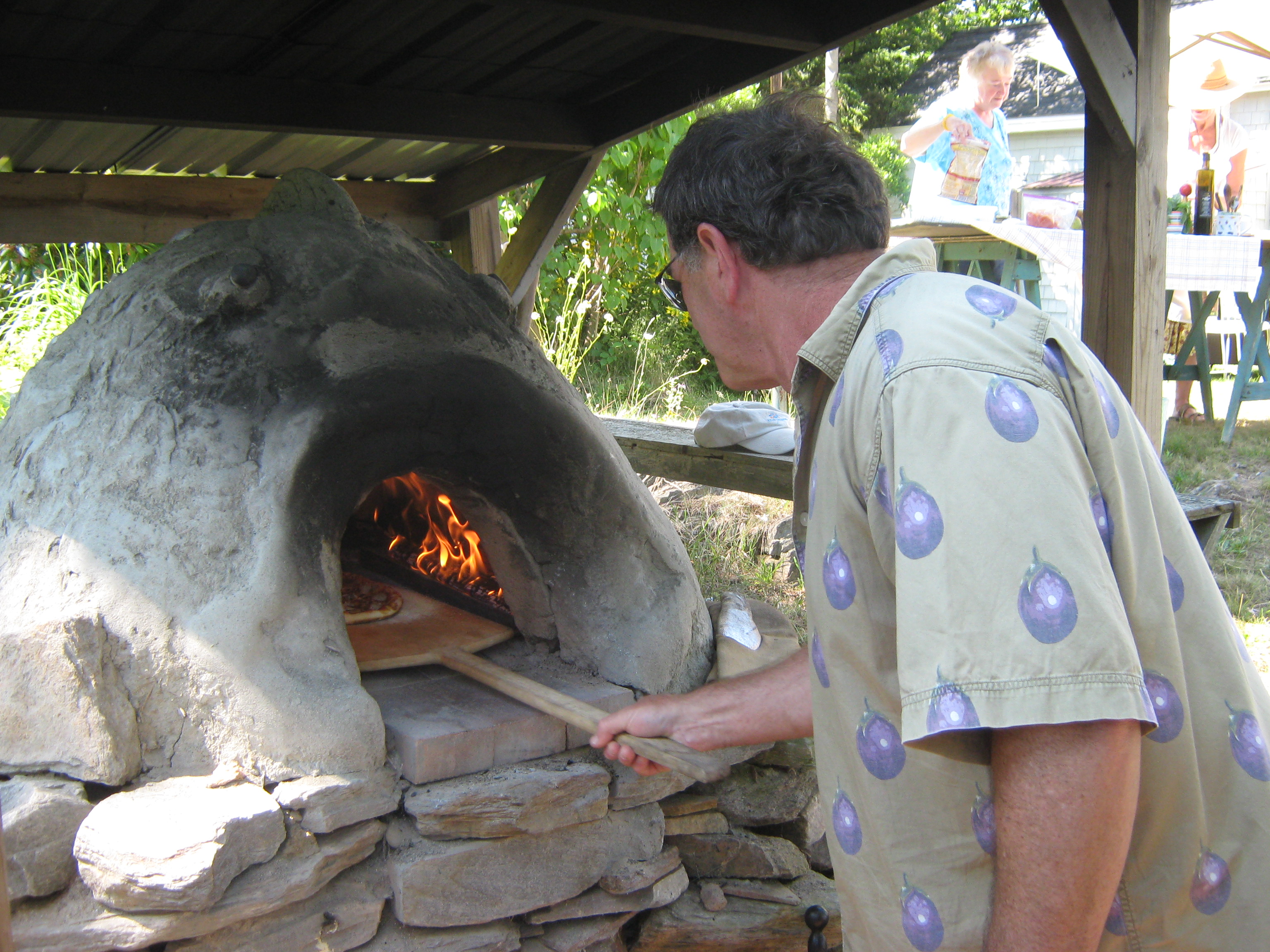 Paul's awesom mud oven in the shape of fish!

On a more positive note…. we went to a party on Bailey’s Island, as guests of guests. Our host Paul built a mud oven shaped like a fish with its mouth wide open to accept his culinary creations.  He made 32 pizzas that day!  Delightful combinations like pear and gorgonzola, eggplant and green salsa….even a couple of dessert pizzas with chocolate chunks, marmallows and strawberries!  I think there will be a mud oven in our future at home! 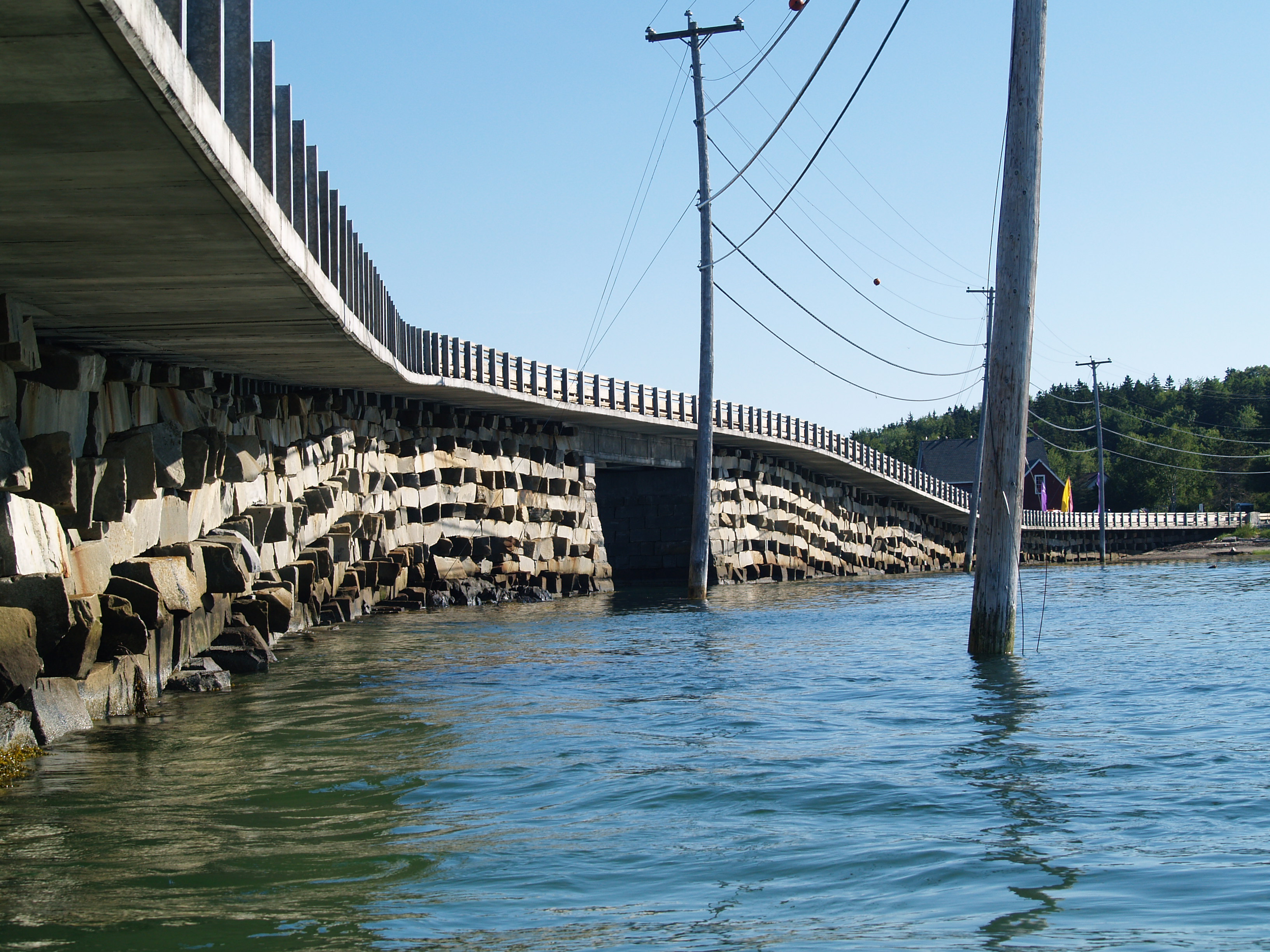 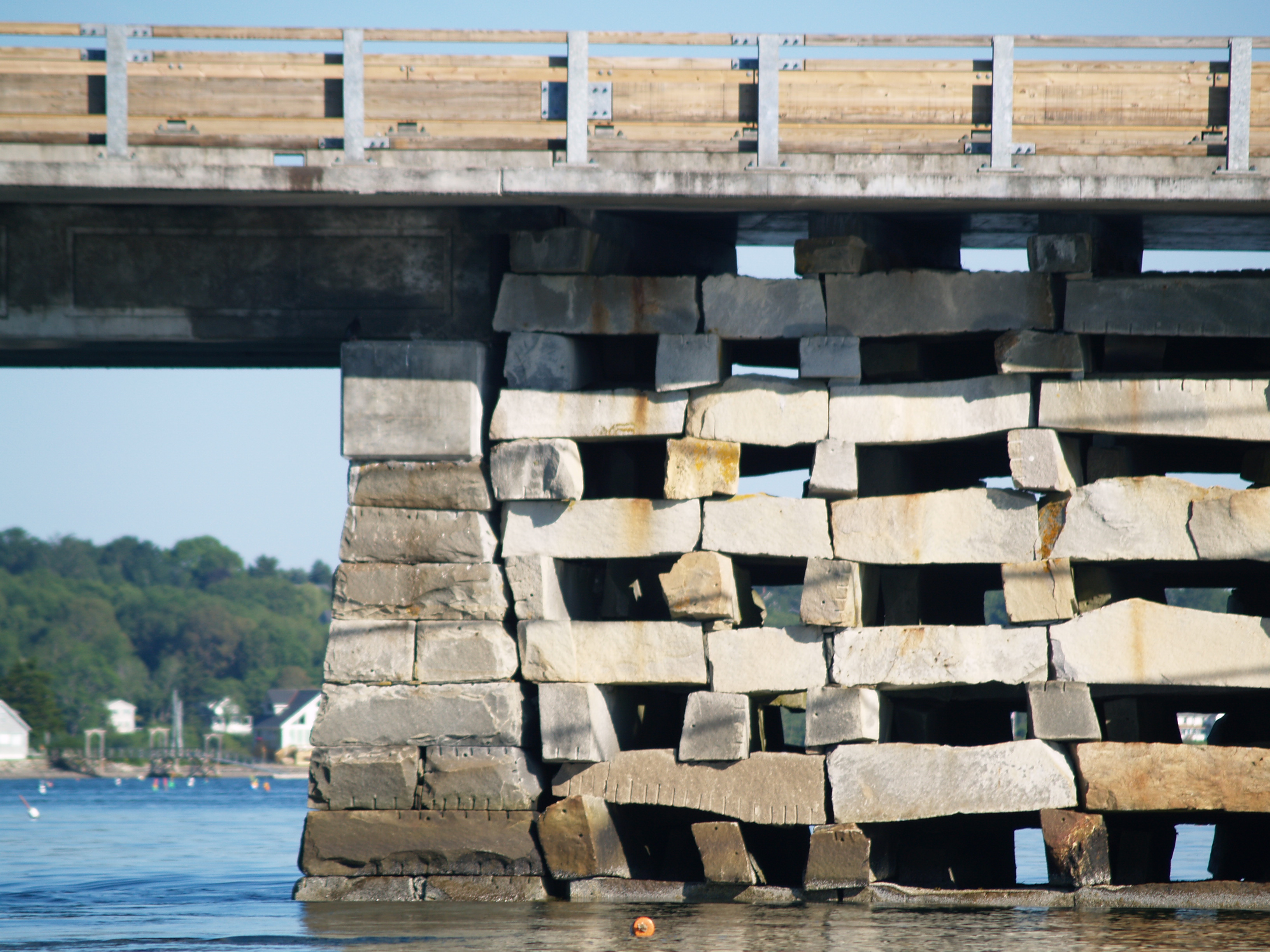 This bridge is built Lincoln Log style out of granite pieces that are resting on each other, no pins or cement of any kind.  Amazing! It was originally in 1927-28 and a recent rebuild was just finished this year. According to local knowledge, there was only one other bridge like it in existence in the 20th century, and that was in Scotland.  That bridge was dismantled during WWII so currently the only cribstone bridge is this one on Bailey’s Island.  We were anchored right on the East side of it! 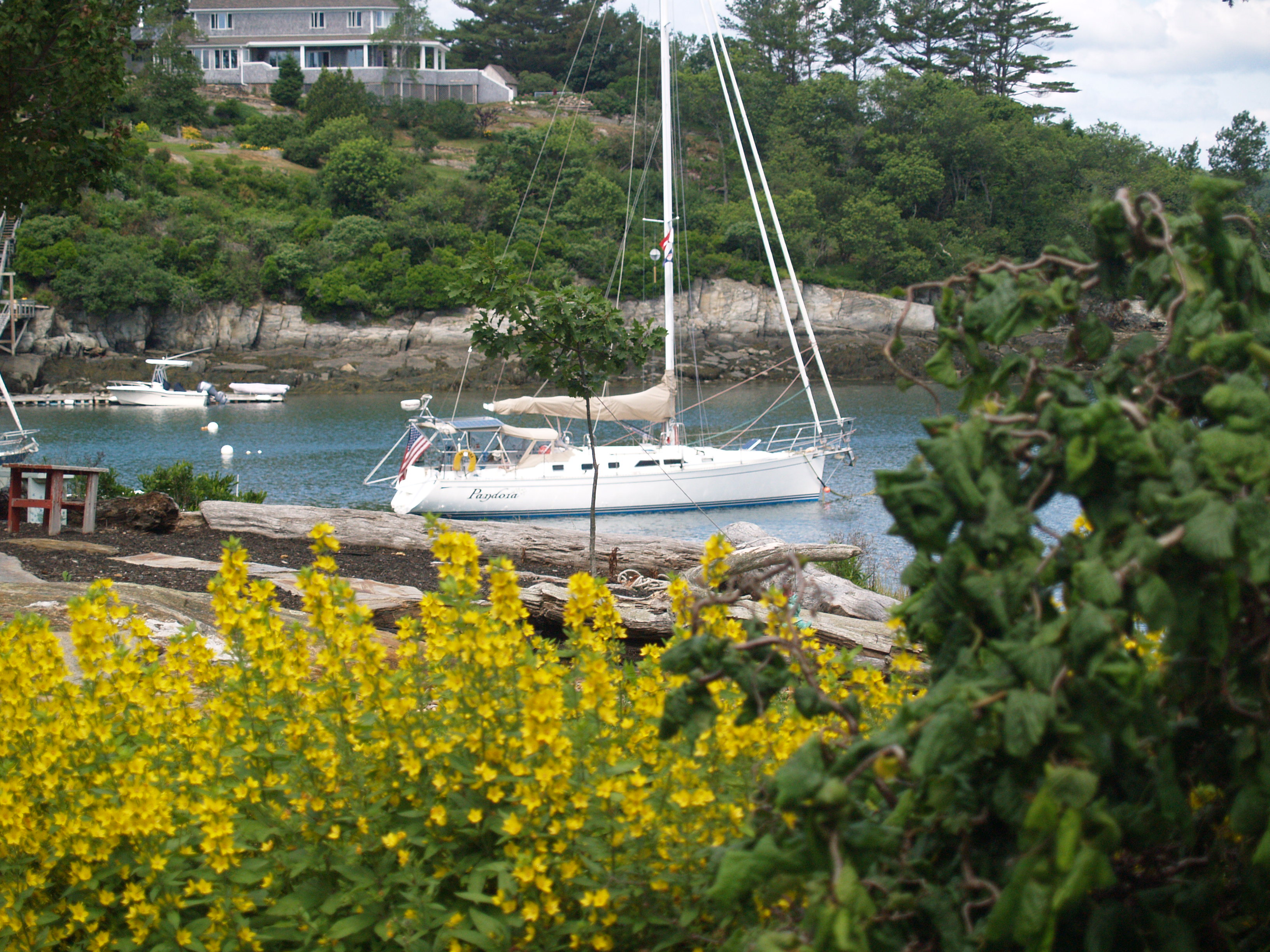 “Pandora” from our host’s gardens on Bailey’s Island 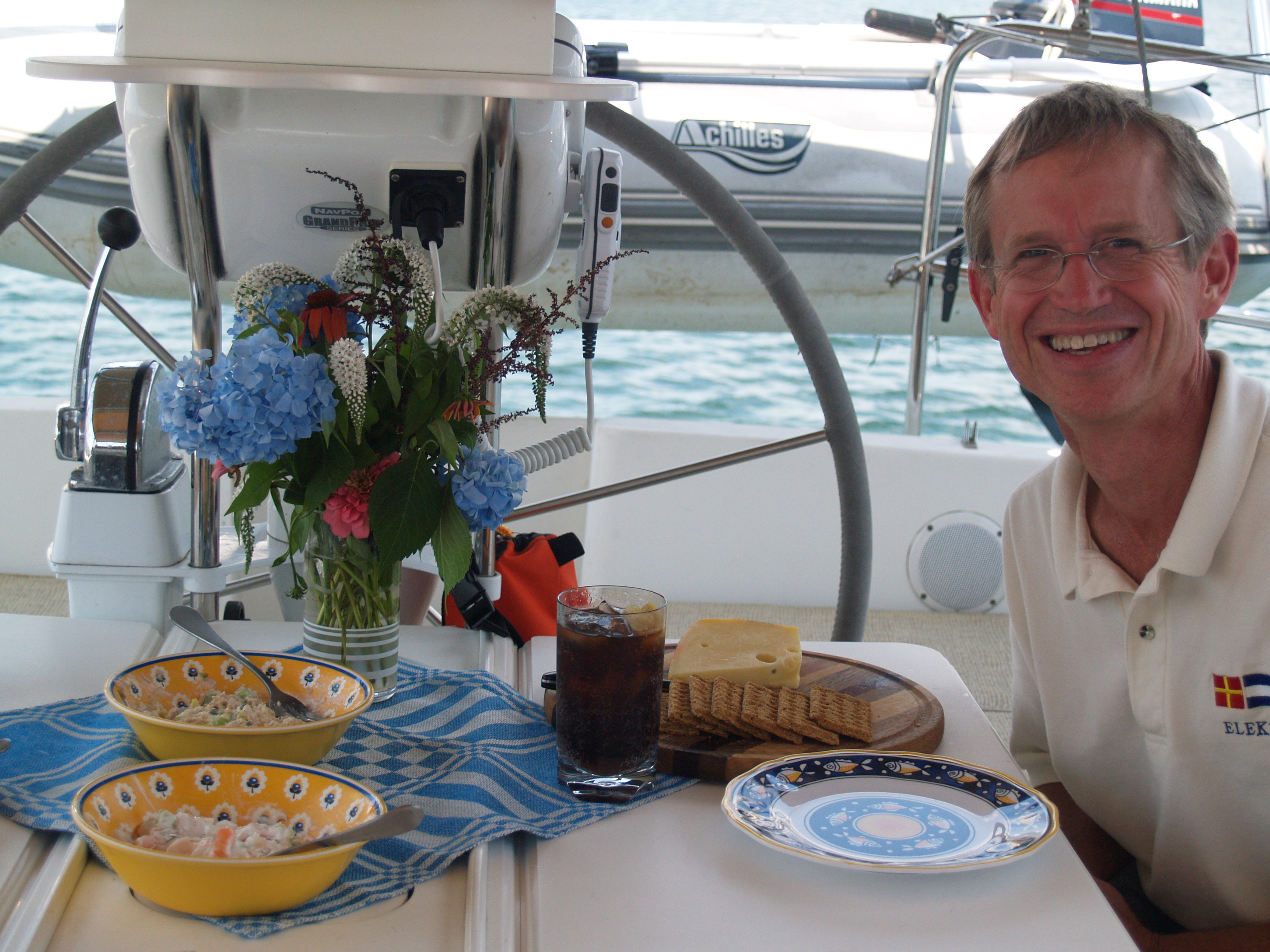 As I write this we are leaving Cundy’s Harbor where we visited good friends with a lovely house and garden right on the harbor.  Their neighbor, a seasoned lobsterman, motored over to us in his boat Life After... while we were headed to the well known “Basin,” and he passed us four lobsters in a bucket!  We will feast tonight!