Home for Spring in New England

It’s the first week of May, and I’ve been back in my ‘real’ world for about two weeks.  It’s been glorious here, in spite of the cold and all the rain.  We’ve just passed through two days of insanely hot temperatures, but as of today it’s the real deal, gentle spring temperatures and gentle rain.

I got home just in time to make it to the fiber art exhibit in Jamestown, Rhode Island, called “Con/Textile/Ized. ” My friend Jody came with me, and we both thought the show had a successful range of works.  We both found that there works that sang out to us–by artists Mo Kelman, Kate Barber, and Valerie Ann Phoenix.  Then there were works that I would not have put in this collection at all, and works that feel in between these extremes.  I think the sharp contrast between the works on display made it a success.

Valerie Ann Phoenix’s work in this exhibit was a dress made of interesting materials that I cannot name.  Some of it seems to be thick mylar.  There are strings of lights wrapped around the dress that respond to noise.  The louder the noise, the brighter the lights.  Well, who can resist that?  Both Jody and I spent time making soft and loud noises, and I tried singing some high notes.  It was a fascinating piece, and it required that I venture out of my comfort zone in order to interact with it!

Here is Jody talking to the dress! Note the purple lights. 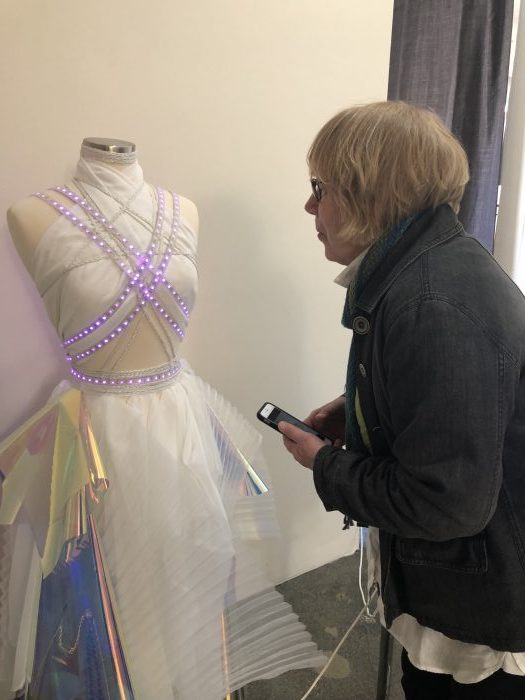 There was a second exhibit at the JAC, that filled the large entrance and the hall leading to the main gallery.  As we entered the center, we were greeted by two large walls filled with small white garments, like the plain underslips of  christening gowns, overlapping and filling the walls.  It was a mass of small white slips in varying fabrics.  There was a vintage 1970s Singer sewing machine on a white-draped table in front of the larger wall of tiny garments. The name of the exhibit was “Re-Dress: On Memory and Being Remembered.”  Each little underslip represented 1,000 Korean babies and youth who were adopted by US citizens over the past decades–sorry, I missed some of the details. There were more than 250 little white dresses. I have just done a search for the info I saved from this exhibit, but I did not come up with the name of the woman who made all these tiny dresses/slips, and who is herself a Korean American adoptee.

I’m so disappointed that now I do not have her name, even after checking on the art center’s website and doing a Google search. Each dress had two tags attached it.  One was an official tag that had the administrative number of the adopted child, and then there was also a plain 3×5 note card on each slip that had a handwritten memory about a child’s birth family.  Many children were adopted at such a young age they have no memory of their family life before coming to the US.  And that was the point of the exhibition–that our memories of family are so important to who we are, and yet many children don’t have that.  It was a moving installation, done by…. I seem to have lost the information about the woman who made this installation.  I took her card, but that was now two weeks ago!

Here is a quote from the artist’s introduction to the exhibit:

I am often asked whether I have memories of Korea, ald although I have a few fleeting images of a dusty courtyard, a chain-link fence, being fed sweet persimmon on a spoon–I don’t know whether these are real or imagined, and there is no one currently in my life who can verify.  These images remain in the province of dream.

Beyond my own memories, I often wish for the stories of being remembered as a child in Korea.

Being remembered is a way of being loved. 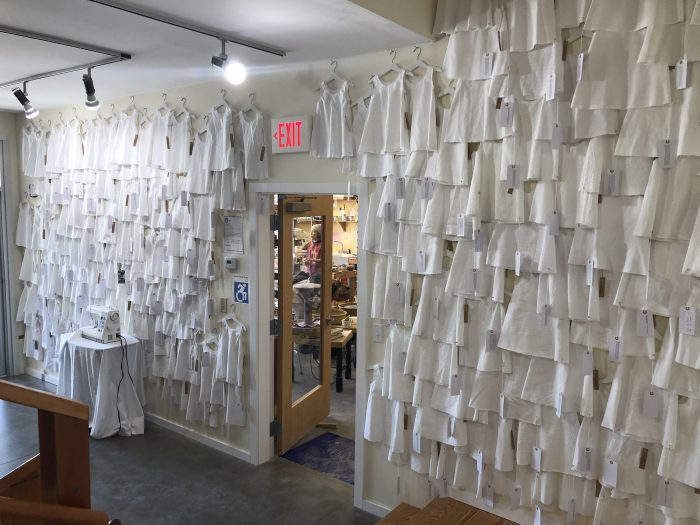 Near the end of the exhibit there was a table with note cards and safety pins for writing down your earliest memory and pinning it to a table draped in white cloth.  It was a moving installation.  I wish I could find the information about it, because the artist has also written about book about on this subject. (I searched for that as well, with no luck.) 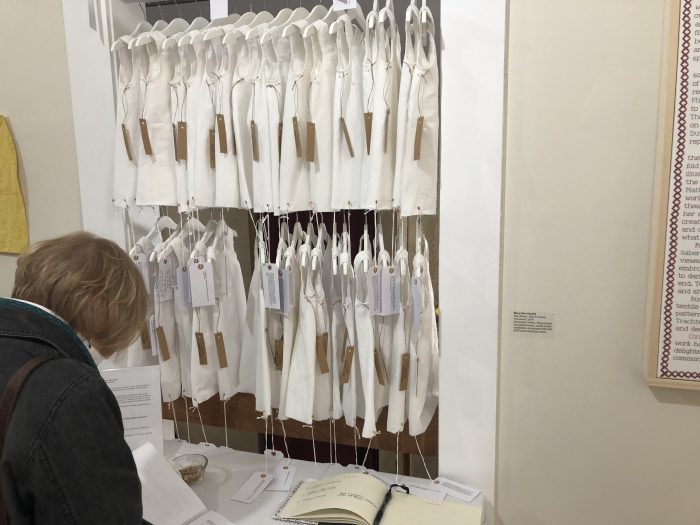 Jody and I capped off the day with a visit to a well known Rhode Island nursery called The Farmer’s Daughter.  What a place!  If you are within driving distance of North Kingstown, you must go!  They have unusual varieties of common plants, they have UNcommon plants, and they have masses of creative ideas of what to do in containers, in the garden, in the house.  We spent more time and money there than we meant to, and we’re not sorry! This trip to Rhode Island was a wonderful way to kick off my season at home–getting back in touch with the things I love and have missed in the Caribbean.  Just this weekend, I enjoyed another such day out and about, in Vernon, Connecticut.  It was the 109th annual Connecticut Sheep and Wool Festival.  Wow!  109 years!  It was my first visit to this small event.  Small, but definitely memorable.  There was an array of fleeces that had been judged and were now for sale.  I could actually walk along the tables and look at each of them without being crushed in a human sea of shoppers.  In fact, it wasn’t even the first stop on my tour of the event.  At Rhinebeck and Maryland, if you don’t get to the fleece sale at the crack of opening you might as well forget it!

The vendors were fascinating! –mostly small operations focused on beautiful yarns and fibers, or creative, hand made things.  I bought this elaborate orifice hook from the Red Hart Bunnie Farm who obviously also sells angora fibers. 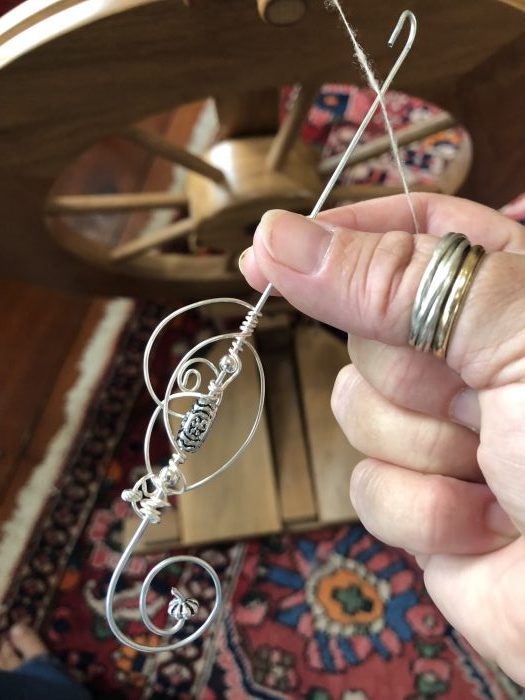 I bought some bamboo buttons with a design of knit stitches burned into them at this booth, Katrinkle.  What a great name, and clearly it was a fun shopping experience. ColeMama Creations is a one-woman operation making different styles of coiled rope containers.  I fell in love with the bucket, and had such a dilemma choosing a color. 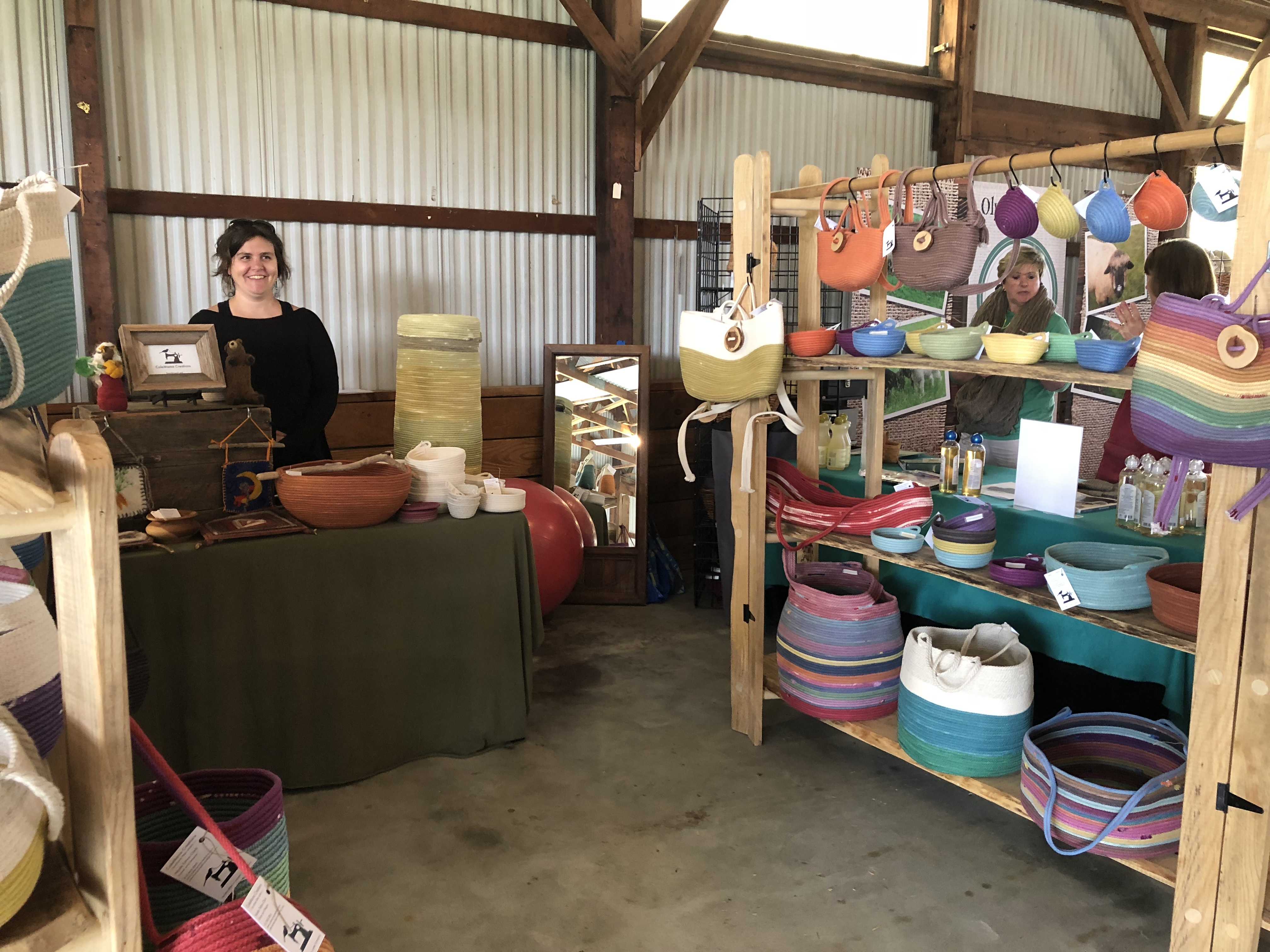 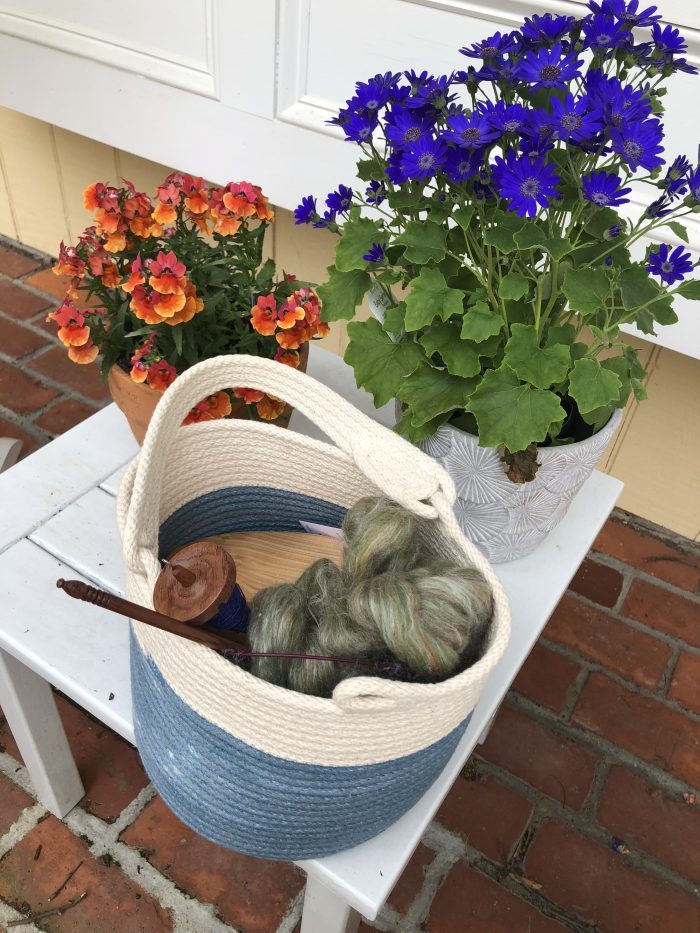 Great vendor displays and easy crowds made the day so enjoyable! 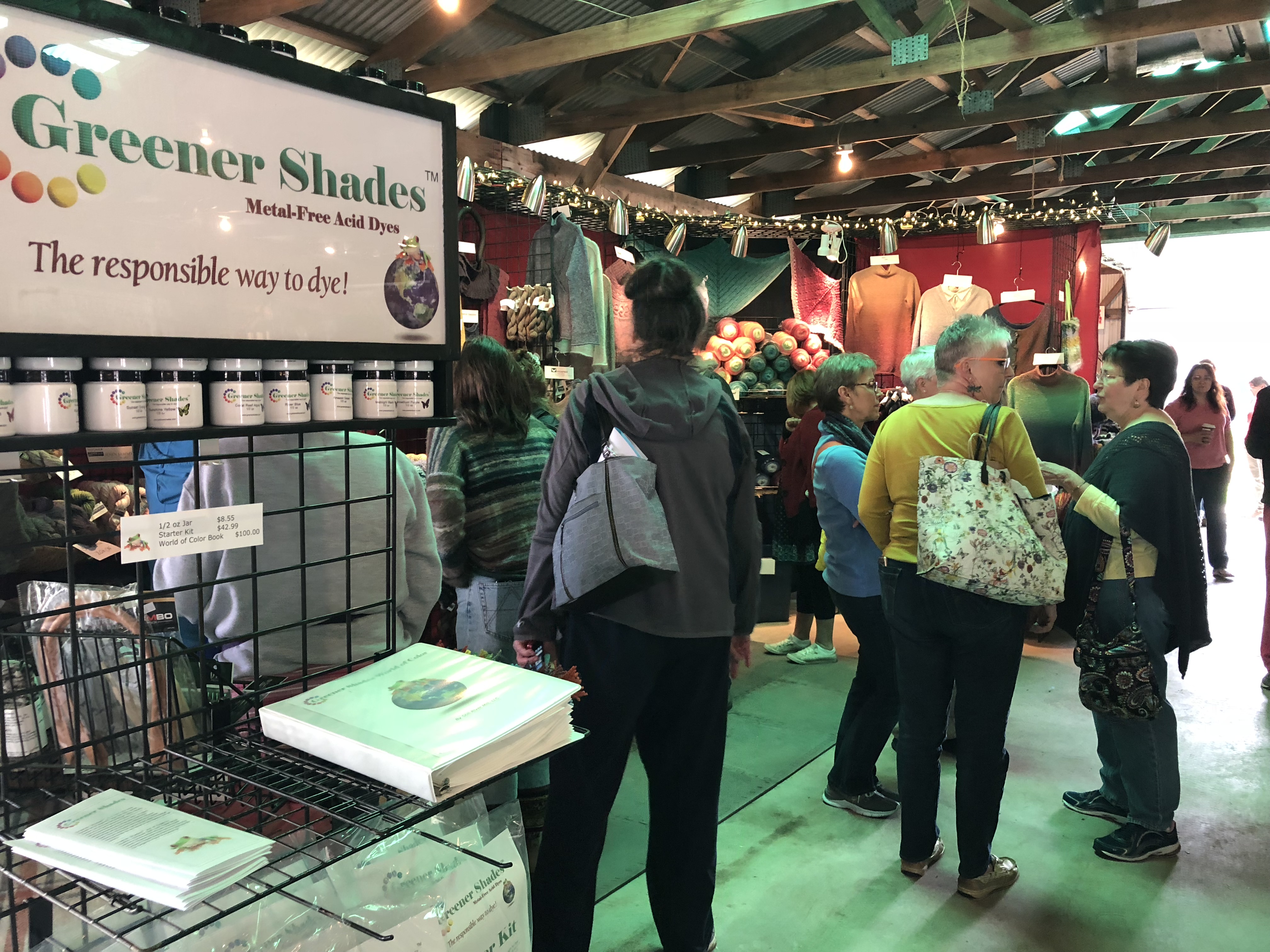 One of the owners of Aisling Yarns makes Shaker boxes out of fallen trees that would otherwise get burned as logs in his fireplace.  He had a selection of sycamore boxes that were my first choice, but since those were already sold out I easily made peace with this honey locust box. It has beautiful patterning on it.  It’s a small box, which this photo does not really show.  It now holds small embroidery scissors along with my small bobbin lace tools. 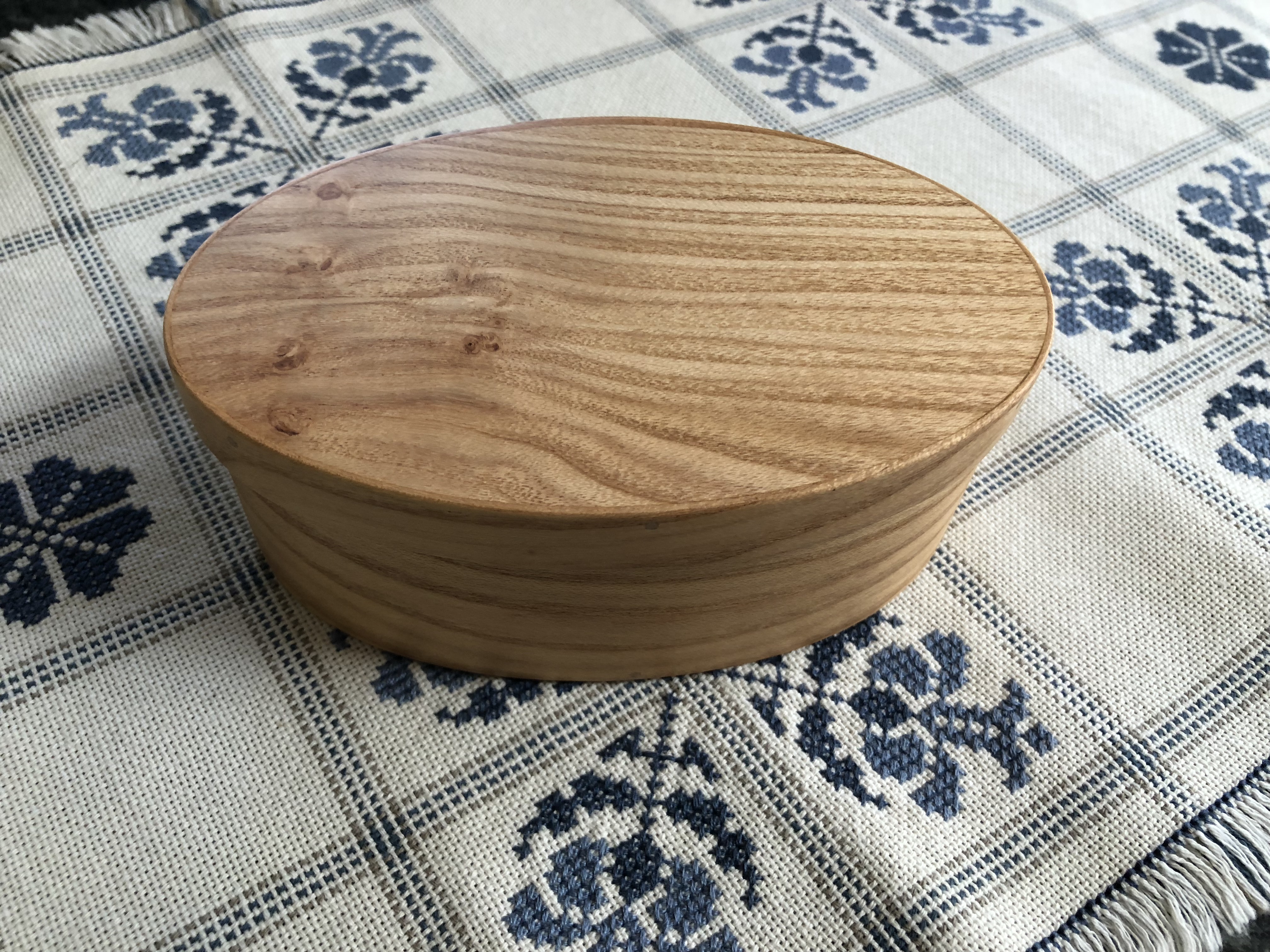 I also succumbed to some things that don’t fall into the fiber category.  I came right home and crocheted this necklace of fresh water pearls and Swarovski crystals.  It was almost instant gratification. 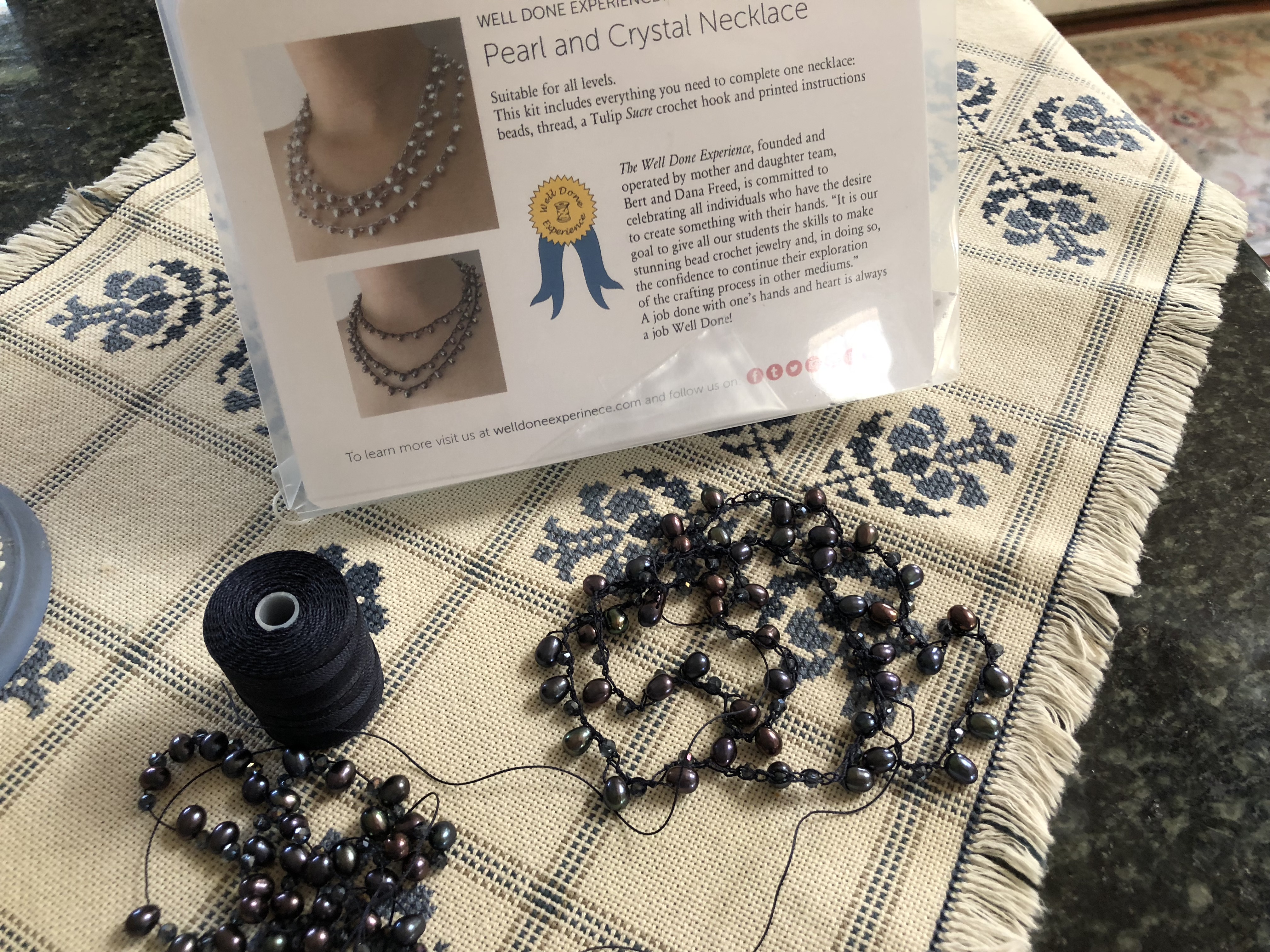 I also found my 10 sheep gifts for the December party of the Flockettes!  But I’d better not show what they are….just in case….

I drove up there by myself, and ran into lots of people I know from both my weaving guild and my bobbin lace group.  I didn’t see anyone from my local area there so I didn’t feel guilty about driving that distance alone.  I was able to see the entire show in somewhat less than a full day. You can’t say that about Rhinebeck or Maryland!  No, there weren’t drop spindles perfectly balanced to spin for several minutes, and there was only one vendor selling one brand of wheel (Kromski, I think), but the wealth of fibers on display,  the creative use of fibers, and handmade items to help make your own fiber experience better was plentiful.  It was a good day!  I’ll go again next year!

At home things are progressing too.  I am so close to finishing my small Portuguese Man of War tapestry.  I have refrained from photographing it.  It is the one of the first times I have made a warp that has to advance around the copper frame, and I am not happy that I cannot see the whole work at once, now that I’ve pulled the piece around to weave the 2nd half of the image.  I have no idea if the piece will work as a whole.  I just can’t bring myself to photograph a partial piece, even though I do it all the time when I’m in progress on a tapestry that doesn’t get pulled around the loom.  It just seems weird not to be able to get an image of what I’ve already woven, along with what’s in progress now.  I will be cutting it off soon and then there will be photographs.  I have a strong premonition that I am not going to like it.

I’ve been spinning.  It was one thing I missed this winter while I was away.  So I’m getting that out of my system.  I bought some cashmere and mixed fibers at the festival last weekend, so of course I am spinning that.  I bought a 1/2 ounce each of 100% cashmere, 50/50 blend of cashmere and merino, and a 50/50 blend of cashmere and silk from Boreas Farm in Vermont.  I’m finishing up the last of the cashmere/silk and will probably ply that tomorrow.  So far I think I prefer the two blends to the pure cashmere.  I am thinking about how these fibers might take dye…..how they might knit up….what to knit.  If something calls out to me, I will buy more! What a coincidence that the woman who owns this farm used to work with Jody before retiring to raise cashmere goats in Vermont.

It was a lovely day for spinning on the deck, and I managed to make it fairly comfortable since I cannot get out the summer furniture on my own.  A few cushions, a small table, and a big water bottle.  The black flies are a bit of an annoyance this year, but mostly the breeze kept them at bay. 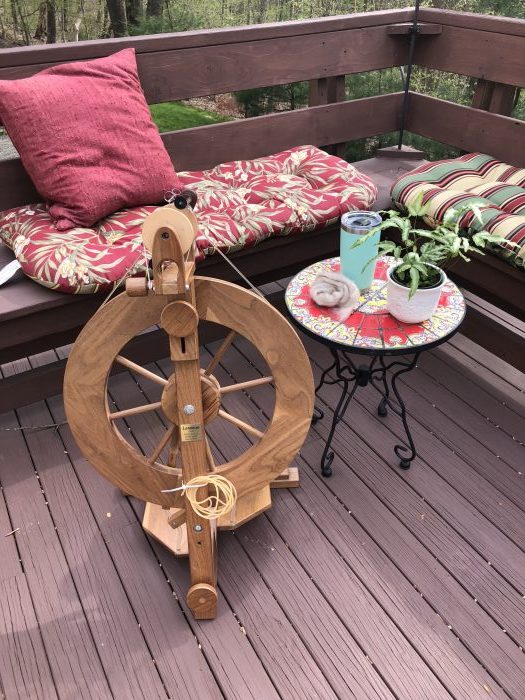 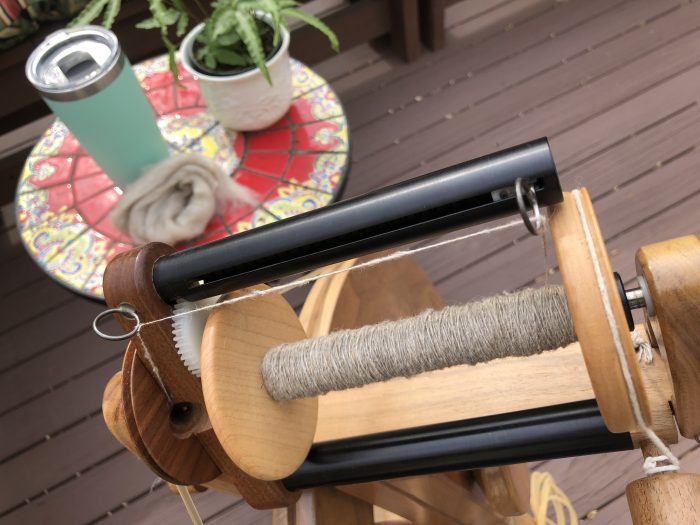 It’s quiet here without Bob.  Luckily we have gotten to talk at least once a day during this time we are apart.  He sailed from St. Lucia to Antigua with a friend after I left, and they made stops in Martinique, Les Saintes, and Guadeloupe on their way to Antigua.  After that he had a week alone before his crew arrived yesterday for the trip home.  They are enjoying some late season events in Falmouth and English Harbour, and will leave for home on Sunday morning.  There will be a mandatory stop in Bermuda to wait for better weather to make the trip up to Connecticut.

I’ve been to Baltimore to see my son and his family–and my adorable 15 month old granddaughter.  She is about to be a big sister to twins, so things are busy at that house! Our younger son turned 32 in early April–I don’t understand how he could have reached such a mature age….. what does that make my age?  He was supposed to visit at the end of April, as part of a business trip to New York,  but the plans changed.  I licked my wounds last weekend by indulging in a few souvenirs from the sheep and wool festival. I have puttered a bit in the garden, and I’ve got some seedlings hardening off outside during the day and still  living indoors for the evenings.  It won’t be long before they go into the ground.  All in all, things are very good–it’s May, and I’m home! 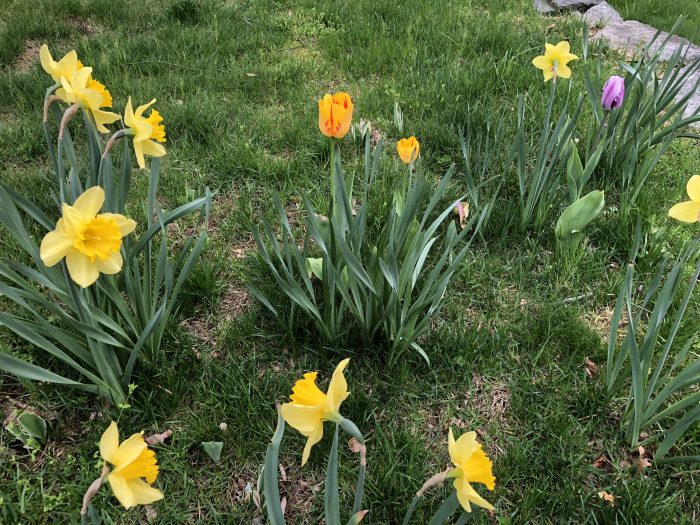 1 Response to Home for Spring in New England