The next two weeks have a lot in store, and I’ve been looking forward to these events all winter! First is my local weaving guild meeting tomorrow.  I haven’t been able to get to one of these meetings since last September, so this is a big deal for me!  We are taking a field trip together to the Rhode Island School of Design to see an exhibit of Mayan textiles.  Isn’t that a wonderful way to get back in the groove of weaving?  The exhibit is called “From the Loom of a Goddess: Reverberations of Guatemalan Mayan Weaving.”

Then, on Friday, I will attend the Connecticut weaving guild’s annual weaving retreat.  I’ve never been home in time to participate in this, so I was ecstatic to learn that this year’s retreat was moved to May.  Even better, the retreat takes place over Mother’s Day weekend.  That was probably a non-starter for most of our members, but I’ve now been alone on Mother’s Day for six years–with my kids living far away these days and Bob far offshore sailing home at this time of year. I wanted to find something fun to do, and this fits the bill perfectly.

The following weekend I’ll go to another retreat, for bobbin lace. It’s almost too good to believe, having three wonderful events all in a row!

I finished a small tapestry yesterday that has spent two winter seasons onboard Pandora in the tropics.  It feels like quite an accomplishment to get it done.  Deciding that it was, in fact, done was one of the hardest parts of working on this small piece.  That is often a problem for me.  It would be awful to cut a piece off the loom and then wish I’d woven another 2″ or so before calling it quits.  On the other hand, I am usually so thrilled to finally finish, it’s quite a chore to stick with those last few inches before the end.  By this point all the ‘important’ decisions have been made, and I’m usually just weaving background.  Then I realize that deciding where to end is a pretty decision in its own right.

Yesterday I had a very small ‘cutting off’ party–just me and my iphone camera.  I figured if I could send a few friends the photo it would be almost like having them with me for the event.  All along I’ve been saying that I rather like this piece as long as I see it in dim lighting from about 10 feet away.  In other words, I don’t really like it.  So, I was a little relieved to find that I don’t hate it, now that it’s off the loom.

I could not see the whole thing as I wove it because I decided to use as small a loom as possible, since it was going on our sailboat.  Around the halfway point of the design I had to advance the warp around to the back.  Yes, I could still see it if I flipped the loom around…but I could not see the two halves together, and that made me wonder if I would like the thing as a whole.  Also, the often-changing humidity onboard wreaked havoc on the warp tension.  The selvedges got incredible loose while the middle remained tight.  There were probably other factors than just change in humidity contributing to this problem. A boat is not the best to store a loom.  I am happy to discover that the selvedges don’t look nearly as bad as I predicted.  Note the scissors in the upper left. 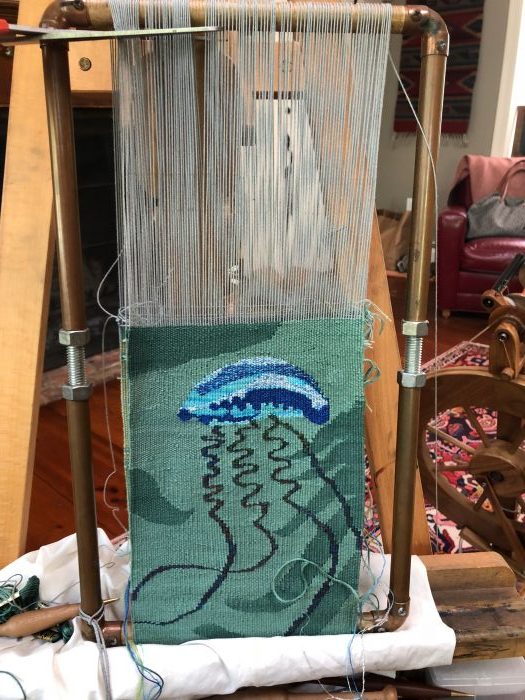 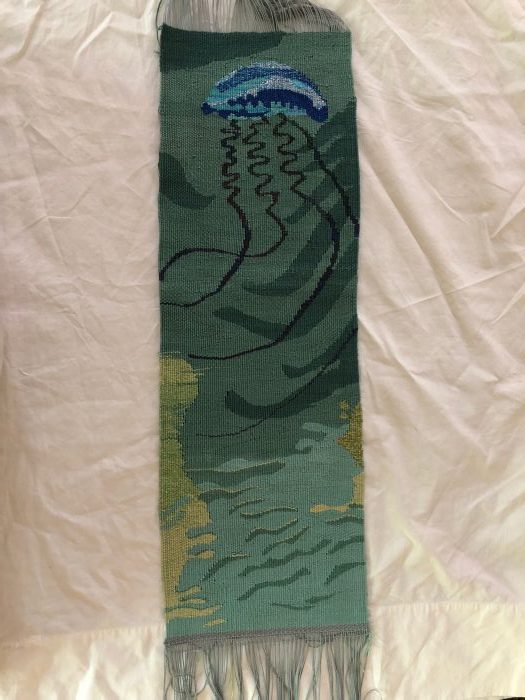 This afternoon I tried a couple of edge finishes for the warp threads, finally deciding on one from Peter Collingwood’s book that he calls “Indian Edge,” a variation of half Damascus.  I will now tack down the warp threads that have been moved to back of the piece after finishing the edging. 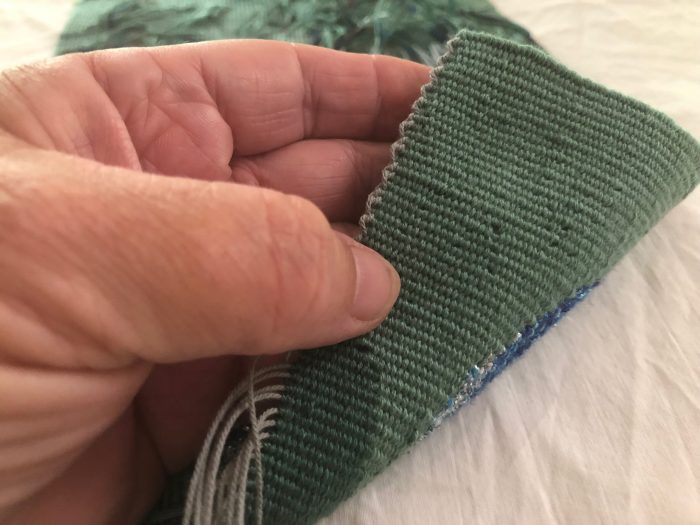 I don’t know anyone who likes the long process of finishing.  I have to force myself to do it, and today I also realized that while it feels like such an accomplishment to finally complete a project, it also feels a little sad.  It’s a little like death.  My relationship with the piece is over, and we will never interact with such intensity again. It is also time to tackle the next big idea, and with that comes a fair share of insecurity about a whole new set of important decisions.  No, it’s not rocket science or brain surgery, but these decisions are vital to the success of a piece.

So, on Friday I’ll be off to Camp Washington Retreat Center in the beautiful Litchfield area of Connecticut.  I’ll spend Friday through Sunday working on my text tapestry that is a favorite line from the Robert Frost poem “Mowing.”  The finished piece will go to our younger son.  Think of me sitting here when I’m in my room (I have no idea if this is actually what my room will look like, but I hope so!  This photo from the website looks so inviting!)

Meanwhile, every chore completed (the Indian Edge finish) needs a little reward!  Don’t you agree?  I spent the late afternoon spinning on my brick terrace, with a great view of gardens and woodland and with the sound of about 1,000 song birds all competing to be heard. 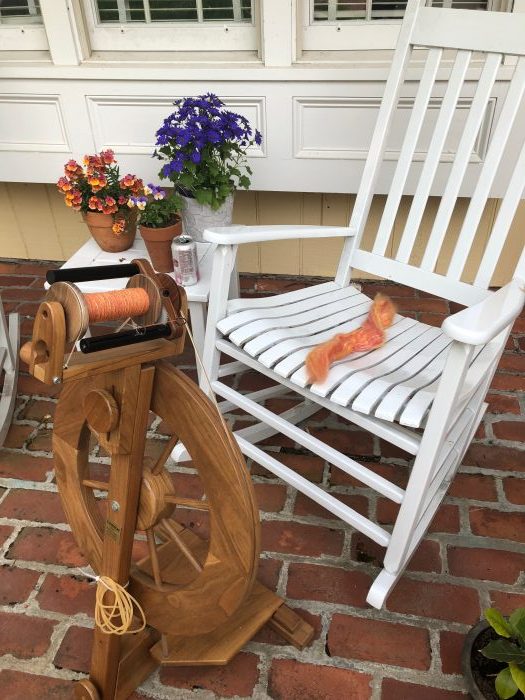 And I learned that spinning from a rocking is not that comfortable OR easy!

Today a friend of mine helped me realize that I am always happiest in May and June.  I hope these two months don’t fly by too quickly.  I want to savor all the wonders of this season. 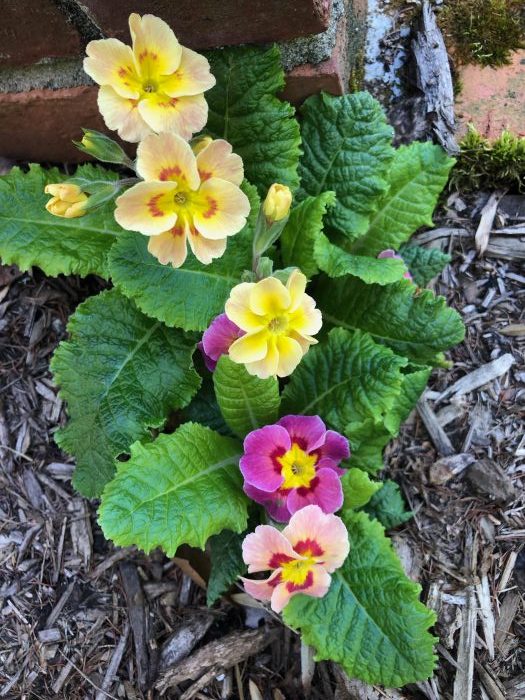