Summer is a time when my weaving projects must take priority since that’s when I’m home to work!  Yet summer offers SO many wonderful distractions!  The garden, family and friends visiting, lots of conferences to attend.  I want to kick back and enjoy the season, but I also feel the pressure to make as much progress as possible before I leave home again.

These are the scenes that greet me each day on my walk along the Connecticut River, although the peonies and iris have shifted to roses, and now the roses are being overtaken by hydrangea. 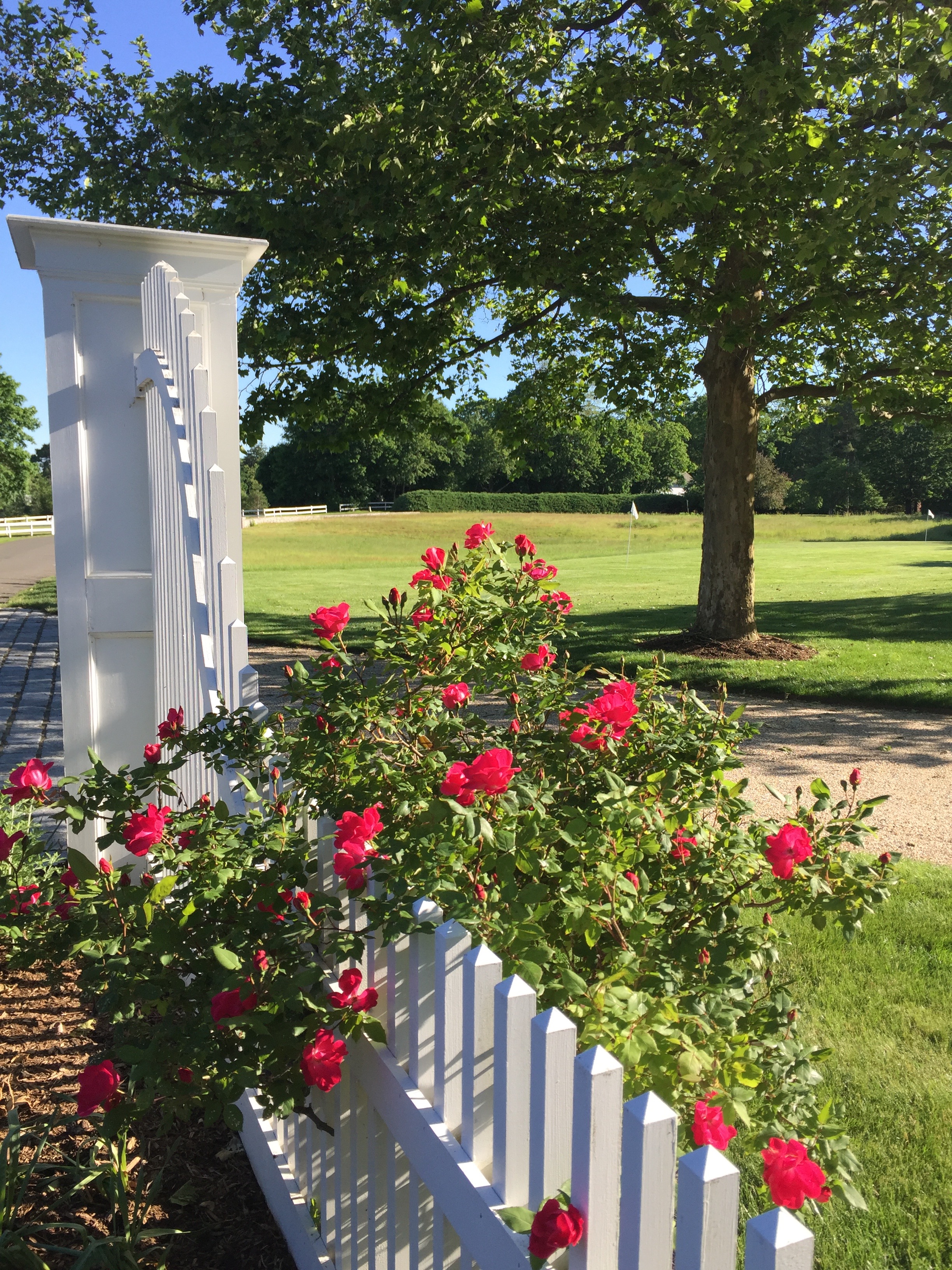 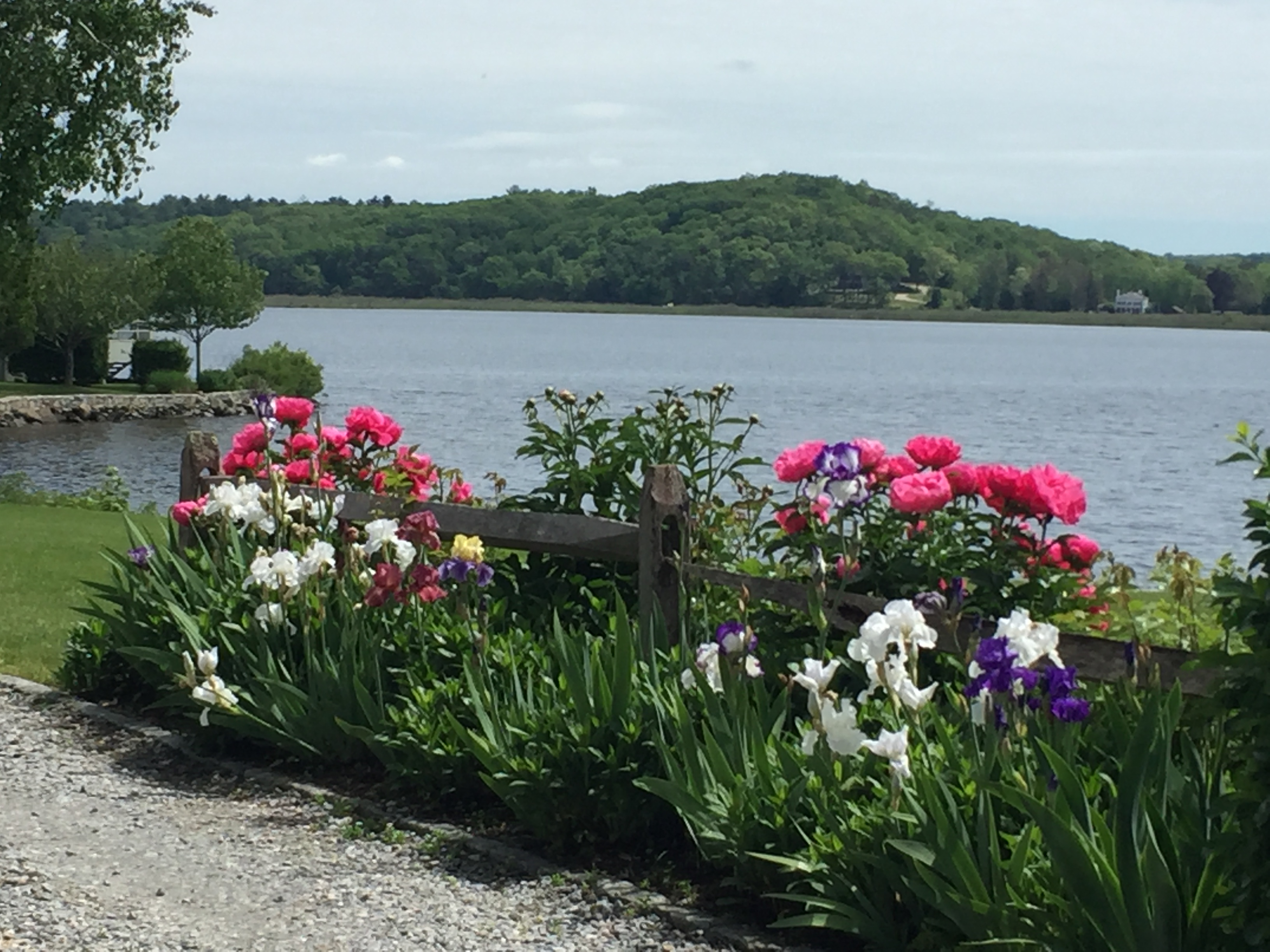 It’s been a banner year for roses in my own garden.  I have to give all the credit to Bob since he has fertilized every time I’ve asked, and he’s also used some kind of eco-friendly spray when the gypsy moths fell out of the trees on to the rose bushes. 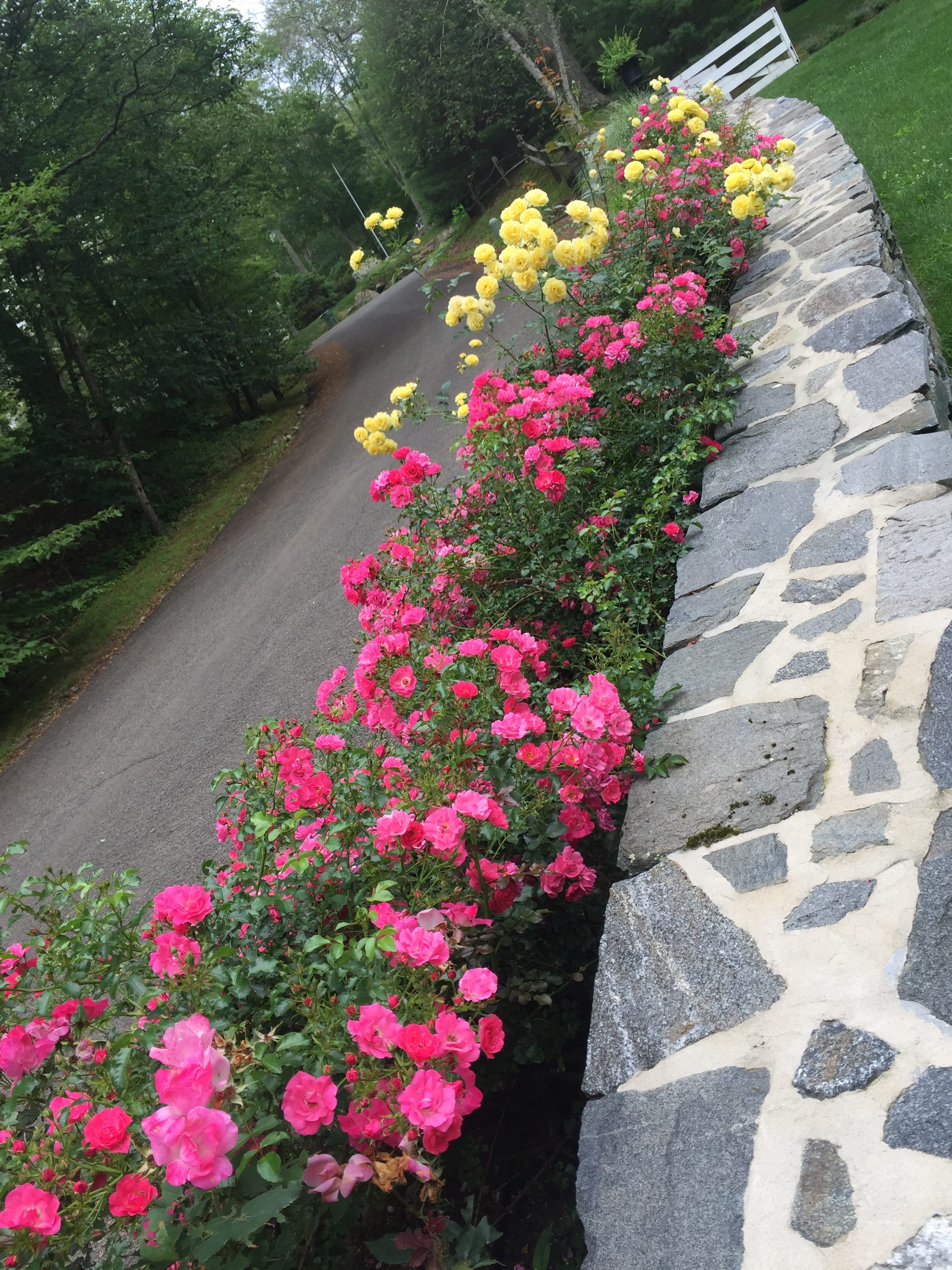 We have a granite wall that is about 100′ long and planted in pink and yellow roses, interspersed with lavender, daisies, and boxwoods. 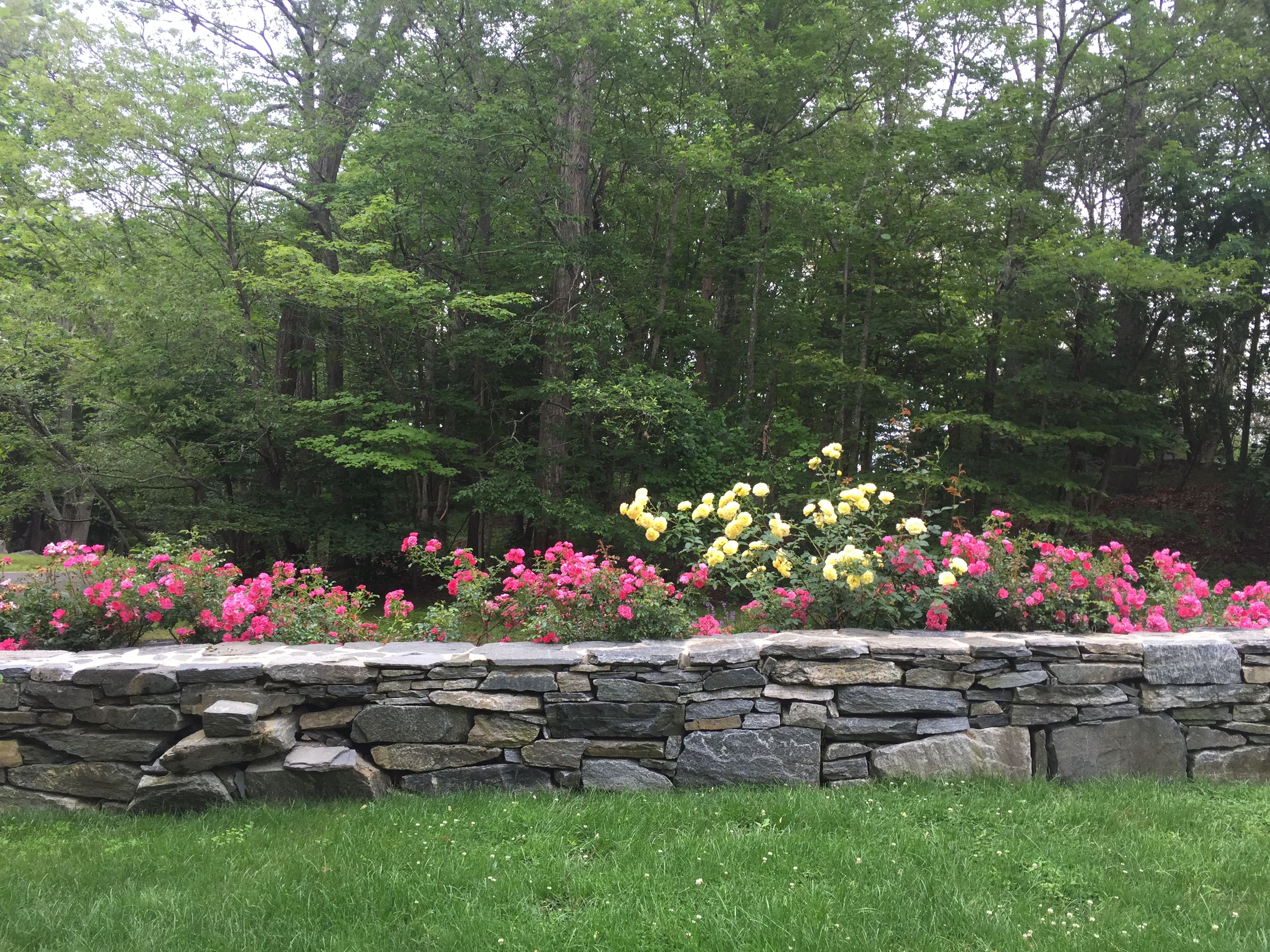 I’m going to back up a bit and reminisce about the trip I took to Tennessee to attend the Southeast Fiber Festival back in April.  Back in April?  Time flies!  I took three weeks to drive down to Gatlinburg and back.  It was a perfect mix of relaxation and adventure.  After spending Easter weekend with my new granddaughter and her parents, I continued south to meet my good friend and tapestry weaver AnnaByrd to make the rest of the trip together.  We had a wonderful 500 mile drive through the Shenandoah Valley and into the Smoky Mountains.  Both going and returning we stopped in New Market, Virginia, and enjoyed lunch in a cafe at the civil war museum there. We were both taking a 3-day class with Jon Eric Riis on Coptic tapestry techniques.

In spite of the terrible destruction in Gatlinburg by last autumn’s fires, Arrowmont is still a stunning place.  There is plenty of evidence of the chaotic and destroying force of fire, but I was relieved to see that there was still plenty untouched. This view is not the direction of the fire came from. 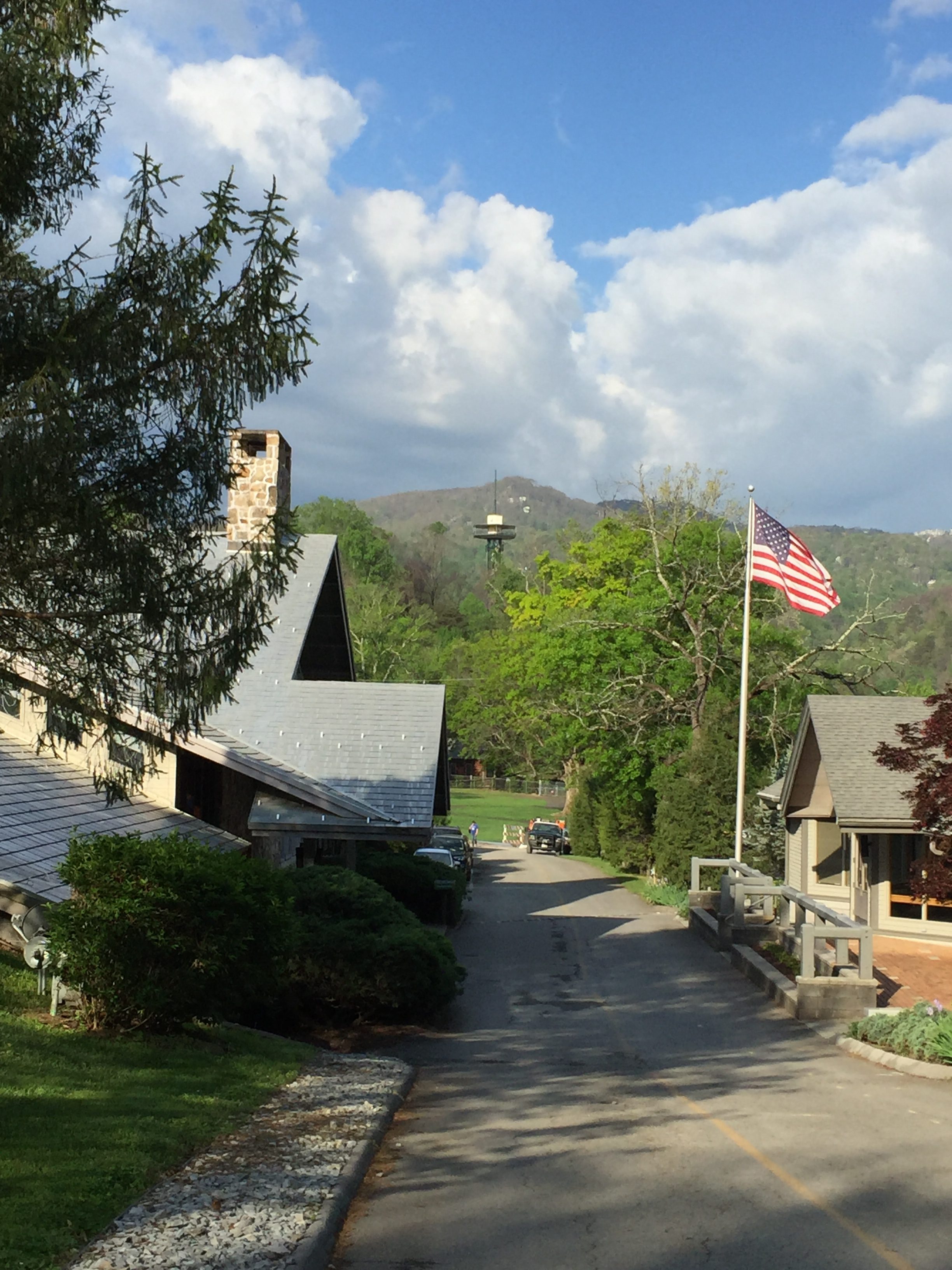 A view of the main building from the dining hall.  The dining arrangement is the best I’ve had at a conference.  I wish I’d photographed the dining room.  It is cafeteria style, and the food is excellent.  You sit at real wooden dining tables that have real chairs.  Although there are a lot of tables in this large room, it feels quite like gathering in a home situation because the food is excellent and so obviously prepared with care, and the setting is so comfortably home like.  Well done! 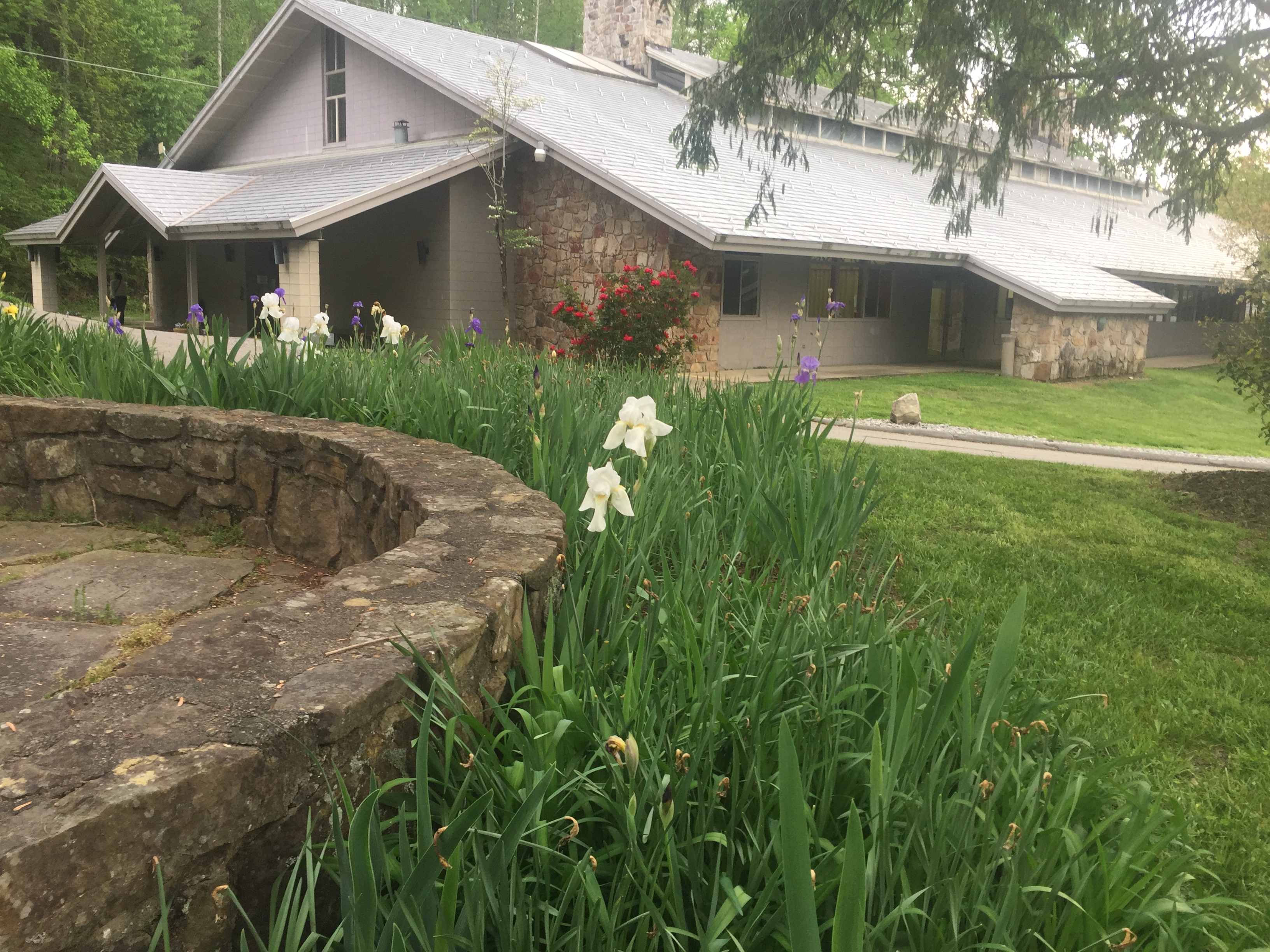 My few photos from this trip are not memorable, but the memories they conjure for me are too good not to use.  Here is Jon during his keynote address for the conference. 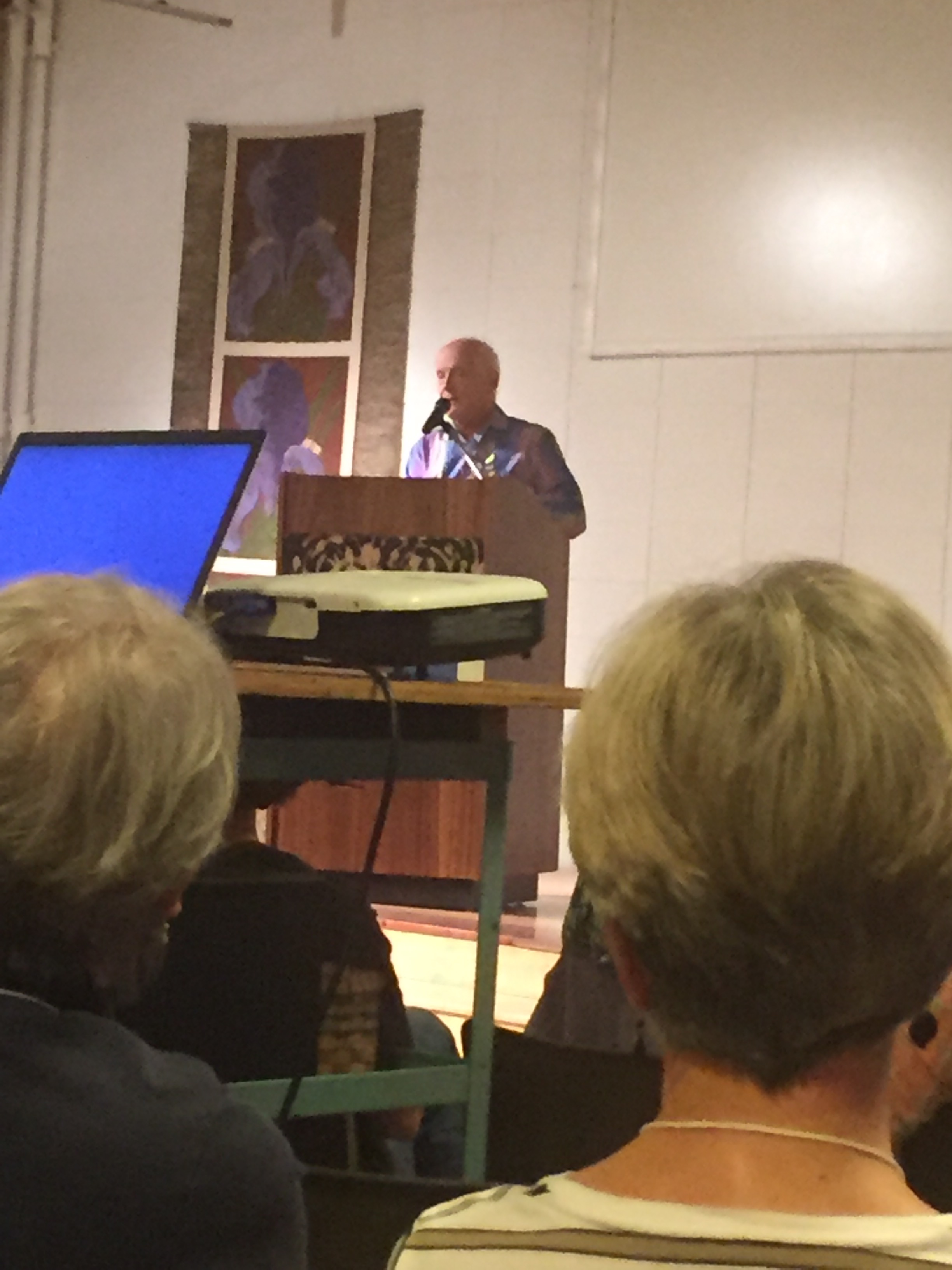 The slides of his work covered most of his weaving career.  I had no idea he’d been weaving for 50 years–how can he be old enough to have had such a long career?  I have always loved his Icarus tapestries, and I no idea just how many works he’s done over the years.  Look at this assemblage of pears! I know, it’s a bad photo– what can you expect of a photo of a projected slide during the presentation? 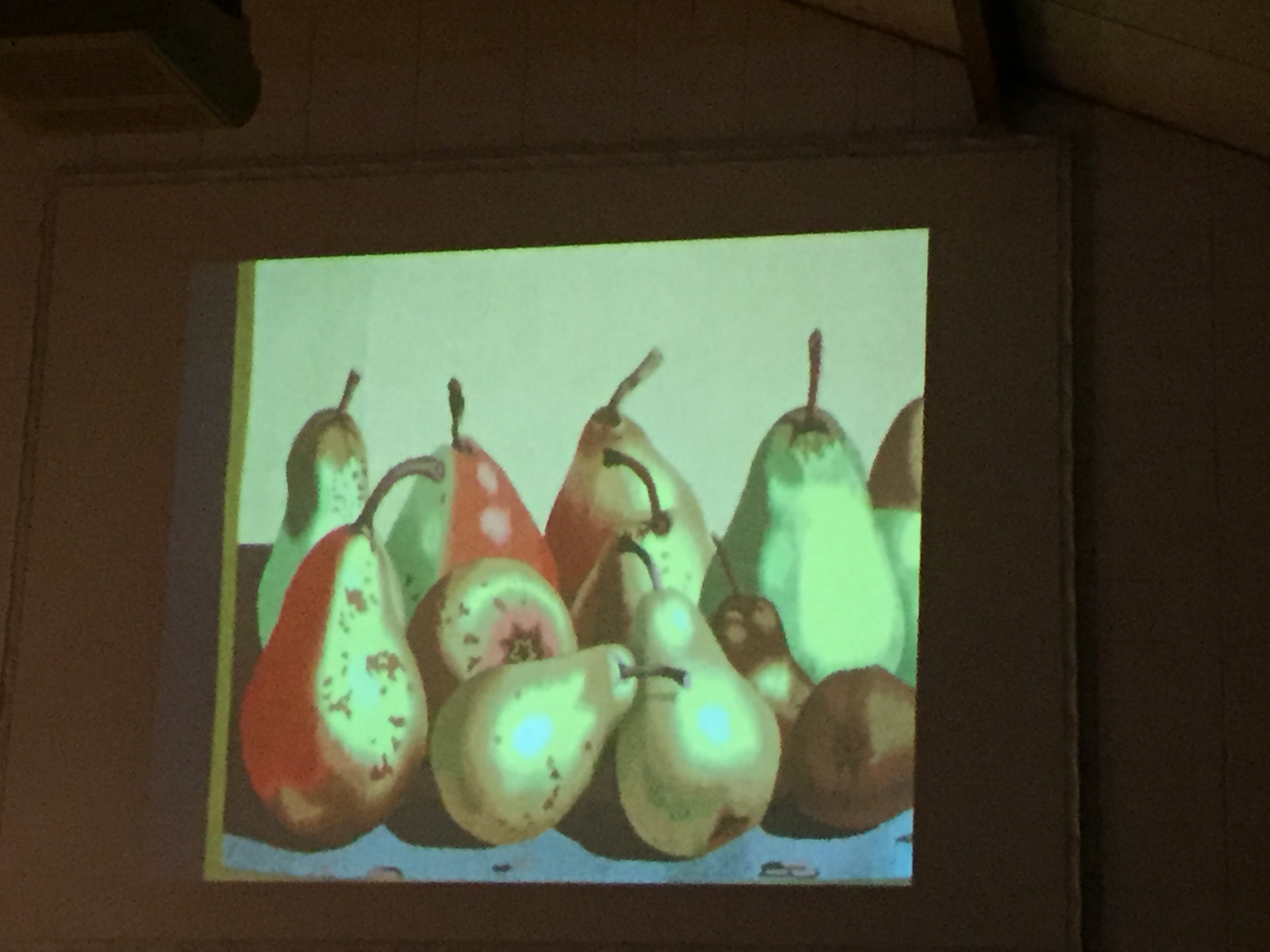 AnnByrd took this photo of Jon and me together, and it’s a great memory for me, even though blurry.  Some day the memory of the workshop will become like this photo….a bit out of focus–but hopefully not too soon. 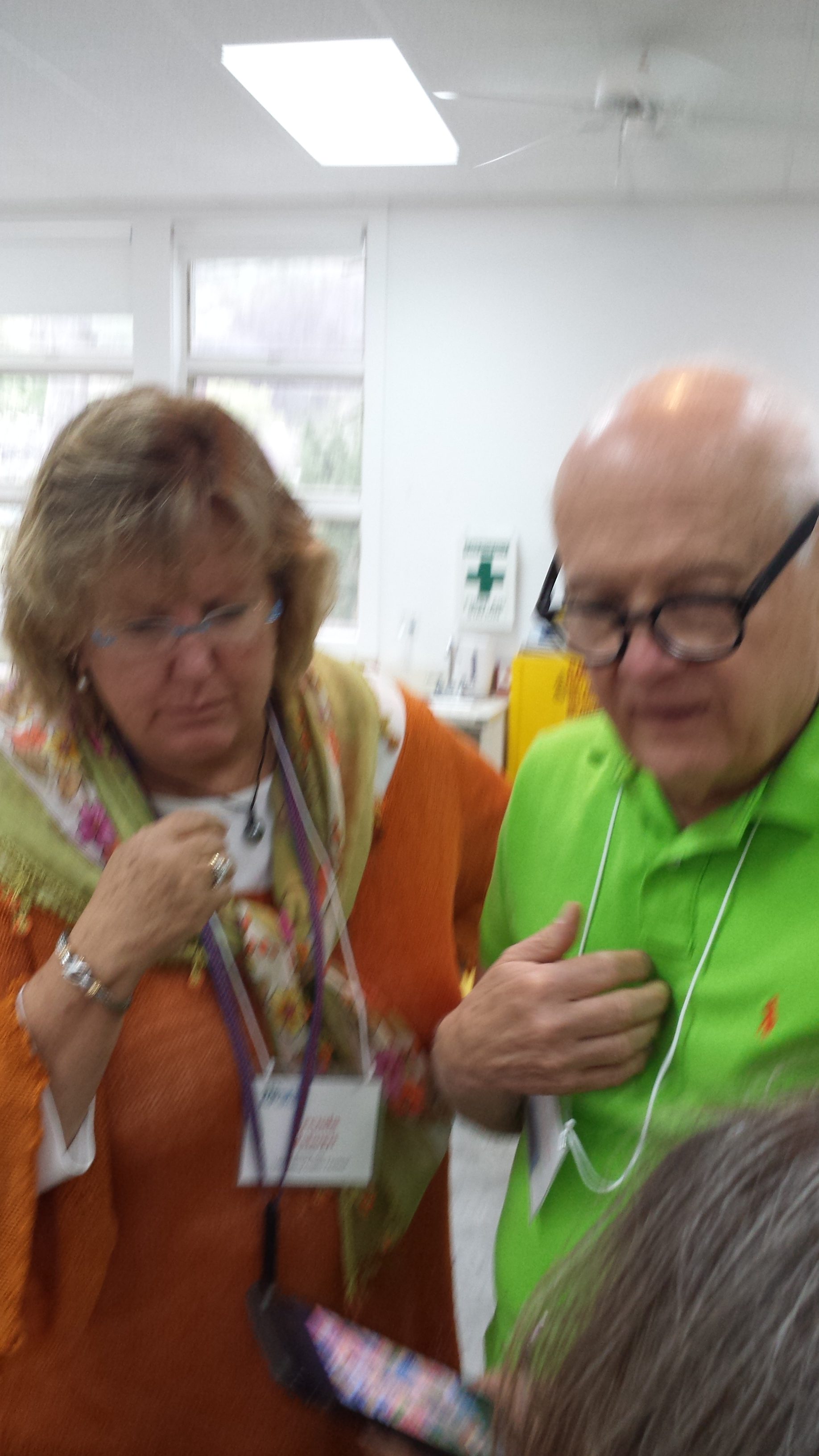 On display in the instructors’ exhibit were a series of partial faces that Riis wove entirely in metallic yarns.  I don’t know HOW he got such a beautiful surface with such challenging materials.  On the last day, after this work was crated, he unpacked a few and let us pass them around.  Look at the curve of the chin–and the shading! 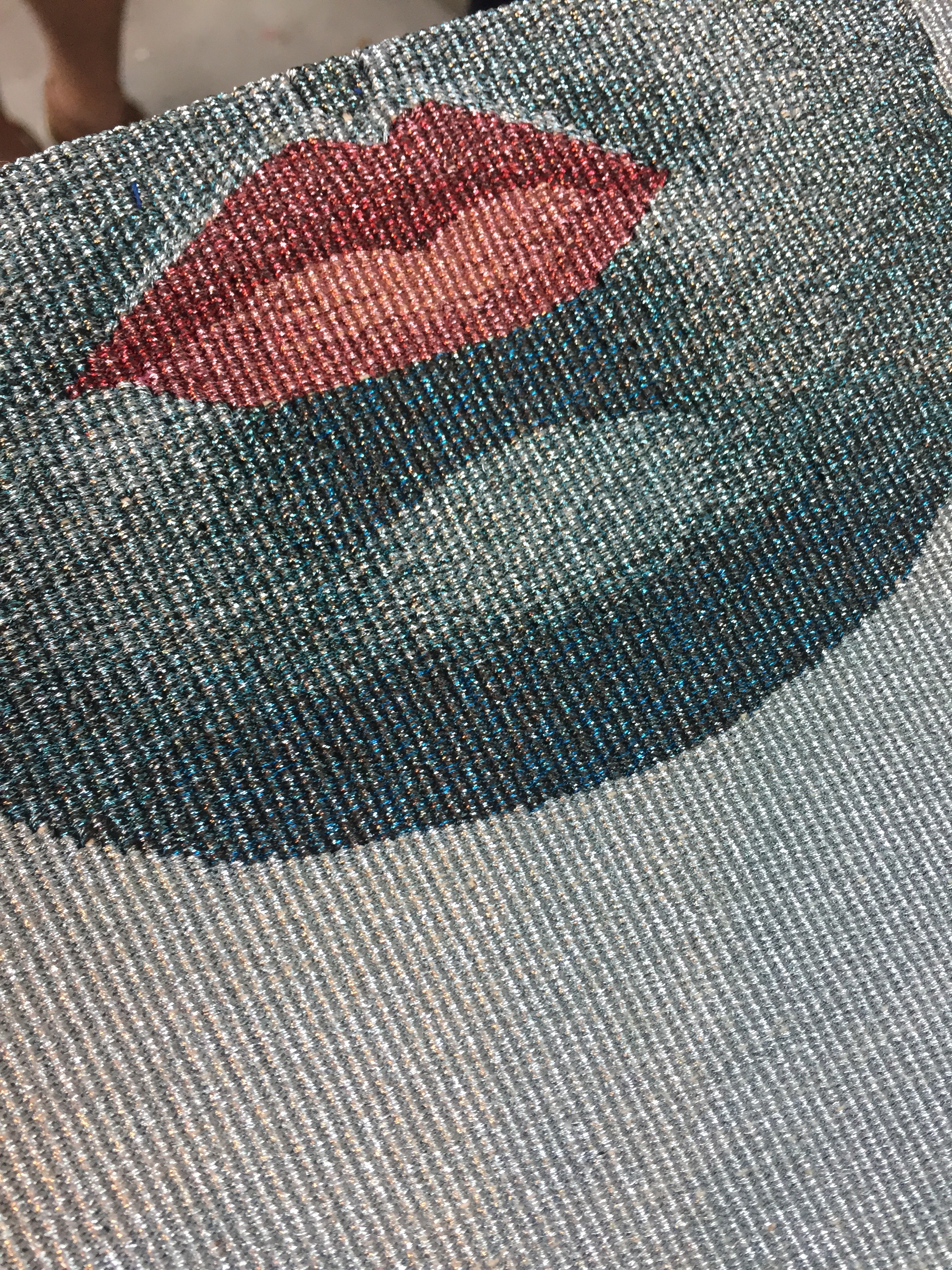 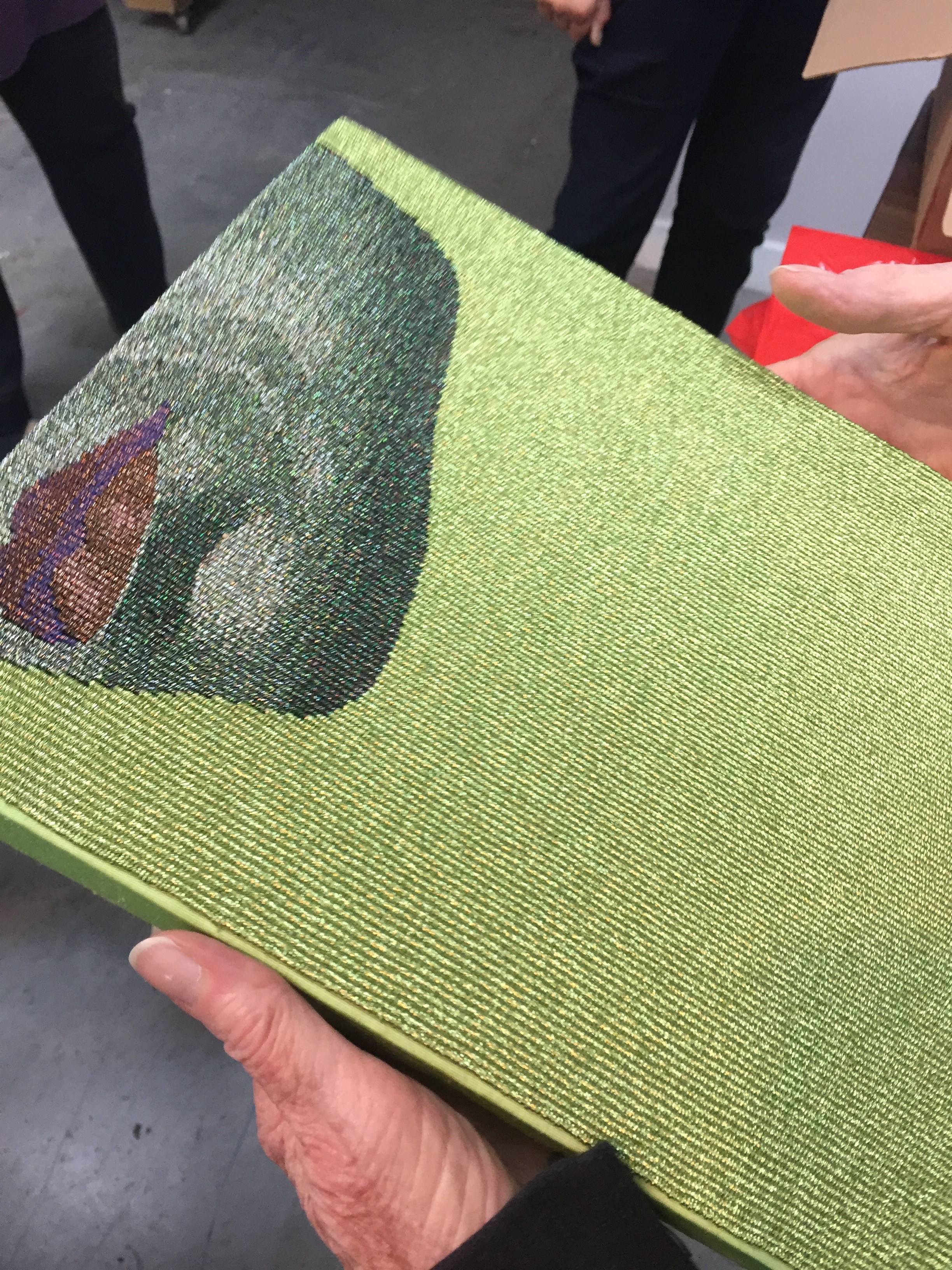 There are 20 partial faces in this series that hang together in a grid.  The piece is called “Diaglogue.”  You can see it here.

About 10 days after I returned home from this adventure, I was off to the Cape with a couple of lace making friends.  We were headed to the Sacred Hearts  Retreat Center in Wareham, Massachusetts, for the annual weekend  retreat of the New England Lace Guild.  It’s a wonderful setting near the beach, all our meals are served to us family style at big tables in a large dining room.  We have private rooms and shared baths, and we can stay up all night making lace if we like, go for walks, take classes, and even buy stuff from the Van Scivers who always come. For the past two years I’ve opted not to take a class, and instead, filled my days sitting in the sunroom with a couple of my own projects that needed uninterrupted attention. There are plenty of other lace makers who do the same.

I spent the weekend working on this project while also keeping track of the eagle cam that was following the eaglet Spirit, on the Anacostia River, just off the Potomac in Washington, DC.  You can just see Spirit at the edge of the nest (upper right) on my computer screen. 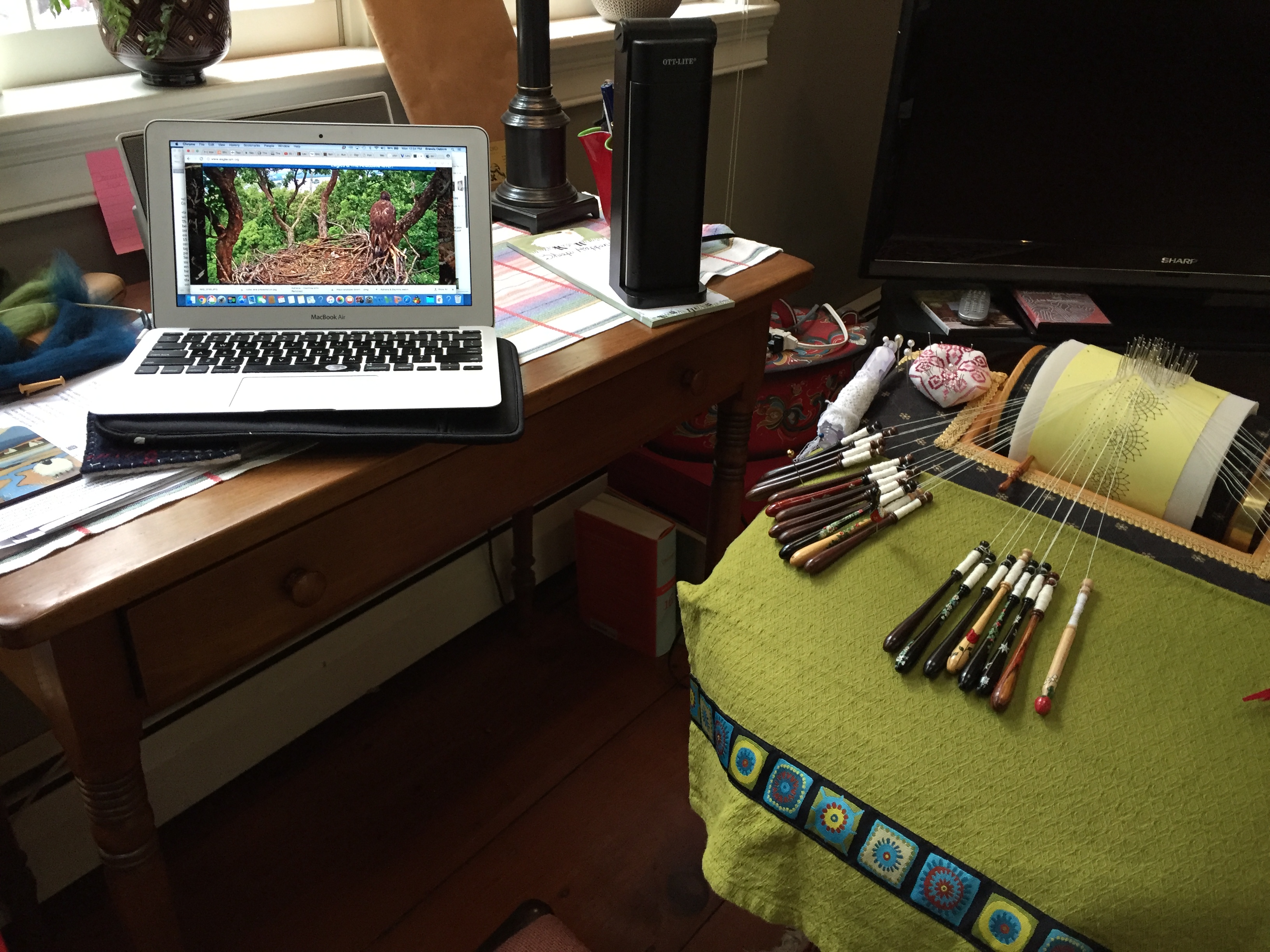 Here is one of the two classrooms….. since the center is in a large Georgian house, the rooms are generous and furnished from decades past.

Back at home, with the summer unfolding, we’ve celebrated our 40th anniversary, and been treated to a long weekend with both our sons and daughter in law, along with cherished new granddaughter Tori and a few good friends.  I’m working on a couple of floor loom projects and two tapestries.

One tapestry is the line of text that our son Christopher asked me to weave.  As of this week, I am 20% done.  It seems like an insane thing to weave, and even Archie tried to dissuade me from this project, in spite of having woven quite a lot of text himself.  Yet I find it both relaxing and challenging.  Chris made the font and then hand manipulated the spacing of letters for my cartoon.  I am not making any marks on the warp, since I’ve found that I have more success working from a cartoon when I let the cartoon be an idea of the weaving, rather than trying to actually follow the cartoon slavishly. 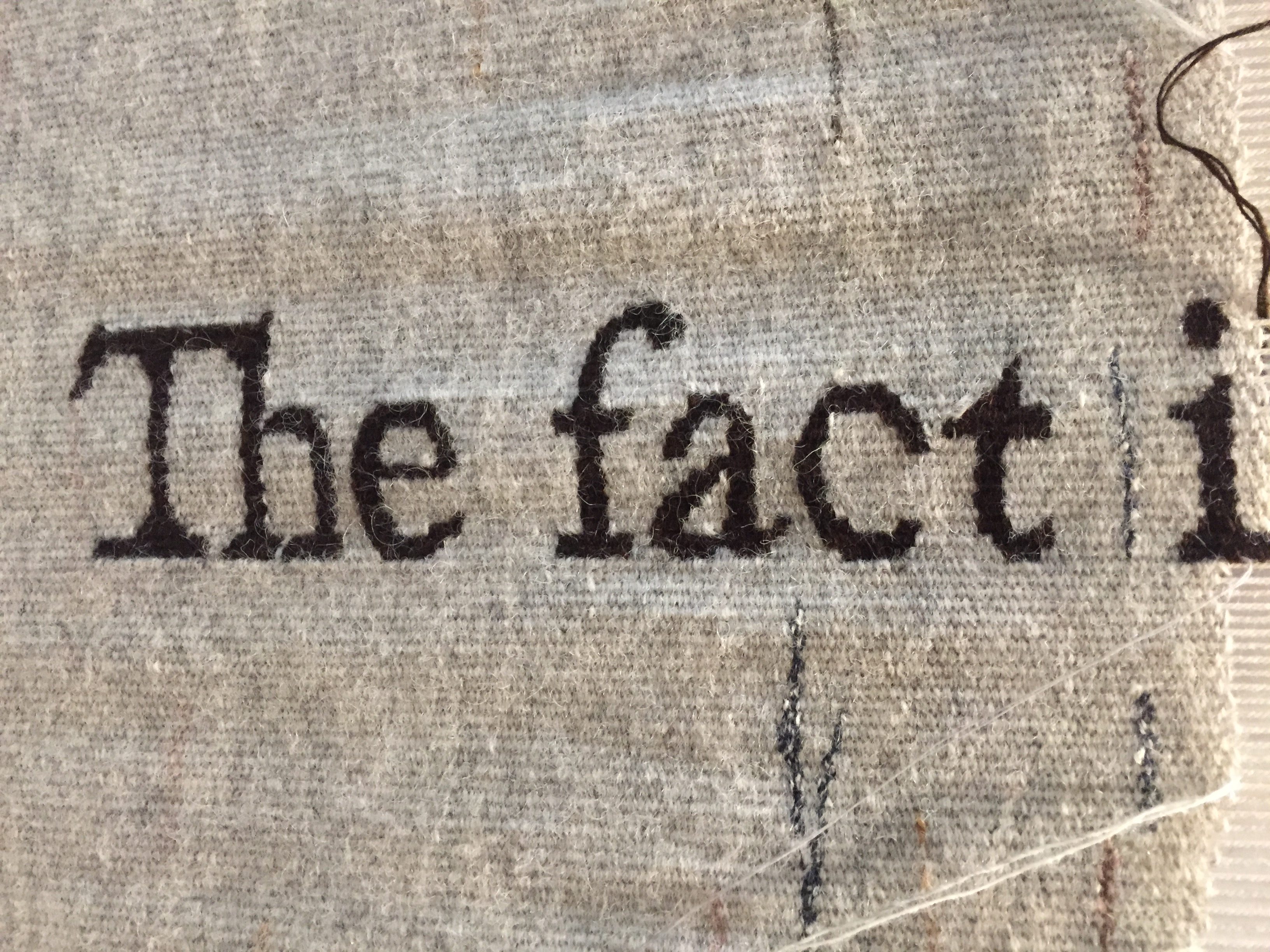 And here is the work in  progress on the design I created in Riis’s Coptic workshop.  The workshop was titled “Unraveling Coptic Weaving,” and we were to bring family photos to reinterpret in a Coptic style.  I balked at that idea and brought a lot of other images that intrigued me more–Minoan dancers, Greek vase paintings, and one of the bas relief religious figures from the facade of St. John the Divine Cathedral in NYC.  Anyway, after playing with those compelling ideas, I settled back on the idea of a family member…..dear little Tori.

The warp is sett at 16 epi, which is considerably finer than the finest sett I’ve ever used before — 12 epi.  Between the fine sett and the neutral color of the warp thread, I am struggling to see what I’m doing!  Still, when I pick the right threads, the weaving is also compelling. 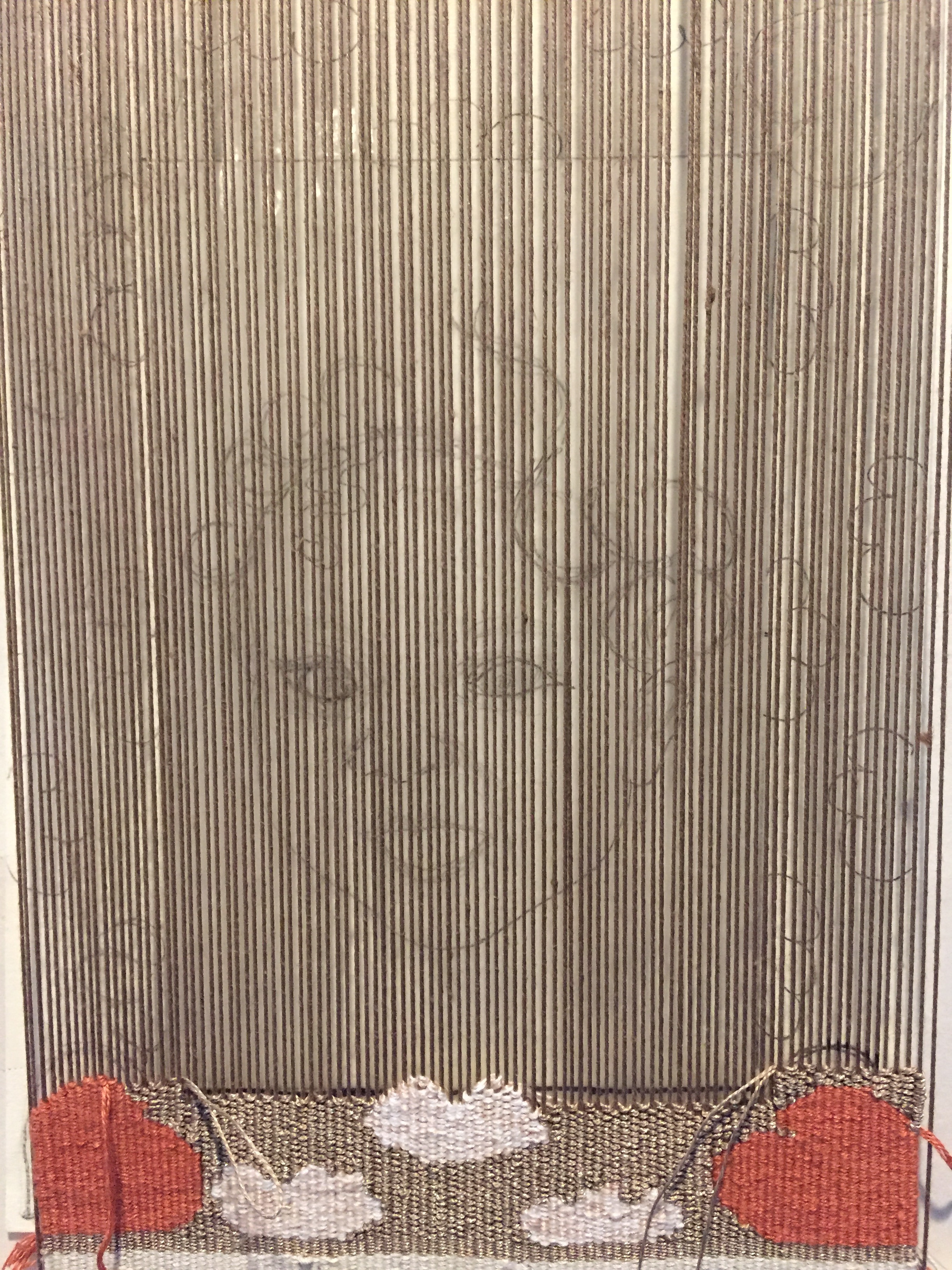 It was a good challenge for me to draw this cartoon.  Tori will be surrounded by clouds with hearts in the corners….schmaltzy for sure, but I hope to balance that a bit by using some tertiary colors. Each cloud and each heart is somewhat different from each other….the only way I can do it. We’ll see.

This morning I measured the lace that I started at the retreat.  It’s also for Tori.  I just photographed it after I put away the measuring tape.  It is now a whopping 32″ long! 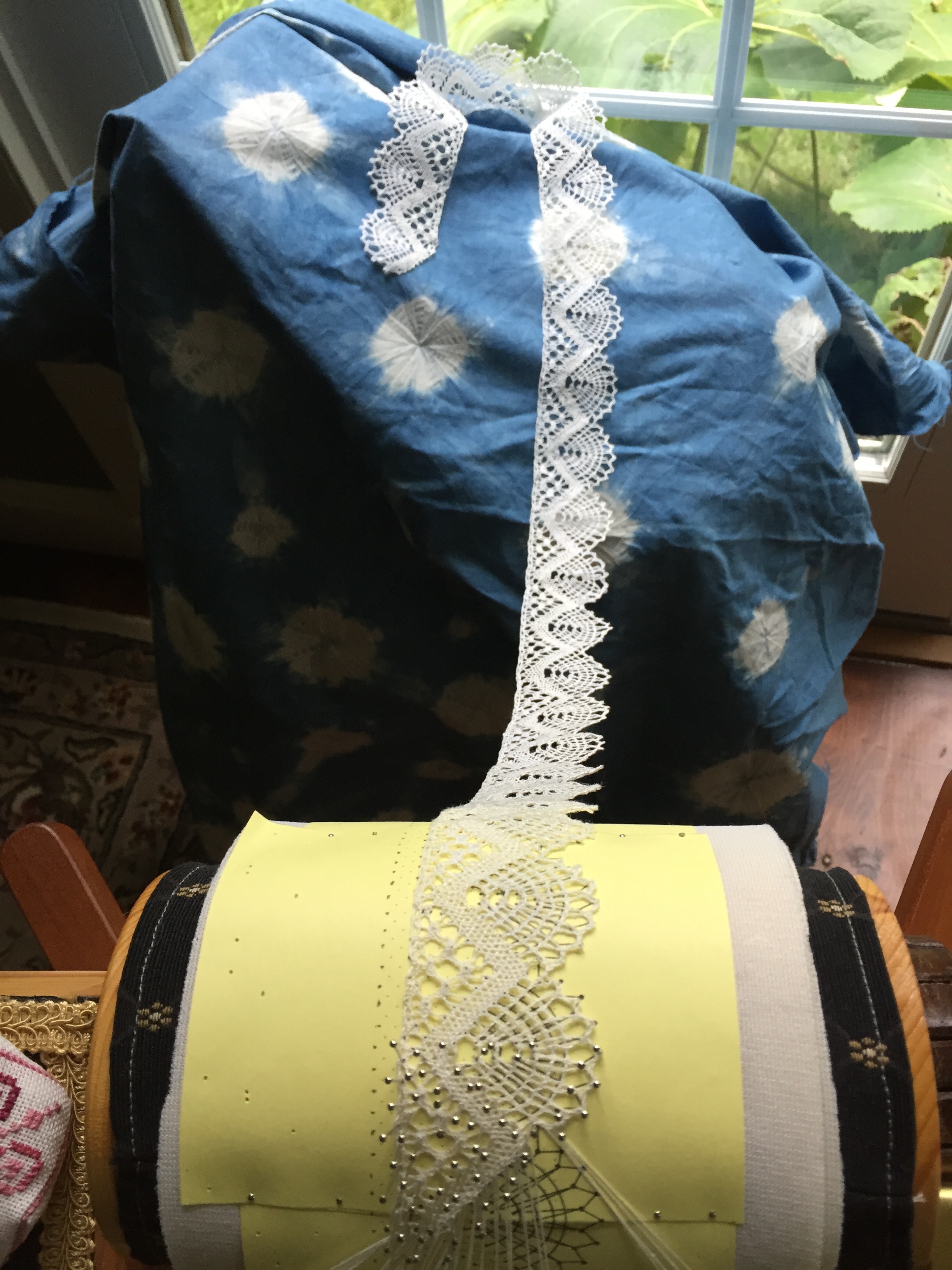 So I’d better get back to work on these projects so I can get some of them finished before the season changes!