When Weaving and Sailing Converge

The month of June is shad season all along the East Coast of the US.  This is the time of year when many communities have shad festivals.  Our festival in Essex took place over the weekend, although Bob and I were not able to take part in it.  The day after the festival, we happened to be visiting the Connecticut River Museum, where Bob enjoys volunteering.  We visited the new exhibit on shad fishing along this river, and  I learned that the town of Moodus, just across the river from us, used to be the twine making center of the US. Amazing that there is such a thing!  The twine making center of the US, in quaint Moodus. There were numerous mills for making gill nets, the type of nets used to catch shad.  These nets work by trapping shad right behind the fish’s gills, in a way that they cannot free themselves by swimming either forward or backward. 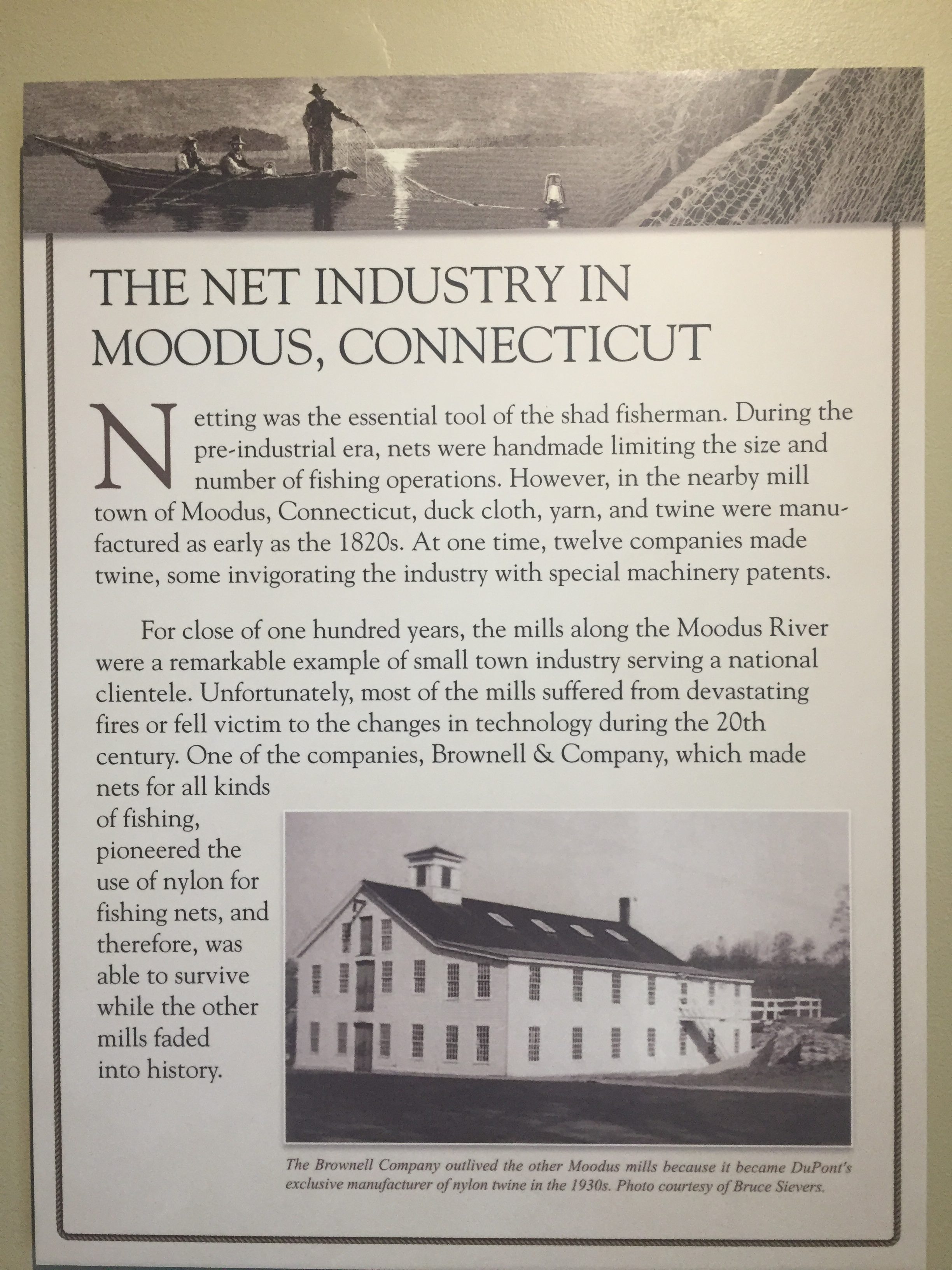 Many tapestry weavers use cotton seine twine for warps, and it is getting harder and harder to find. Most of us rely on a Swedish brand of twine that comes in several sizes.  I had no idea that this very type of twine was made in this part of the world.

Here is the gill net making machine invented by Wilbur Squire around 1872. 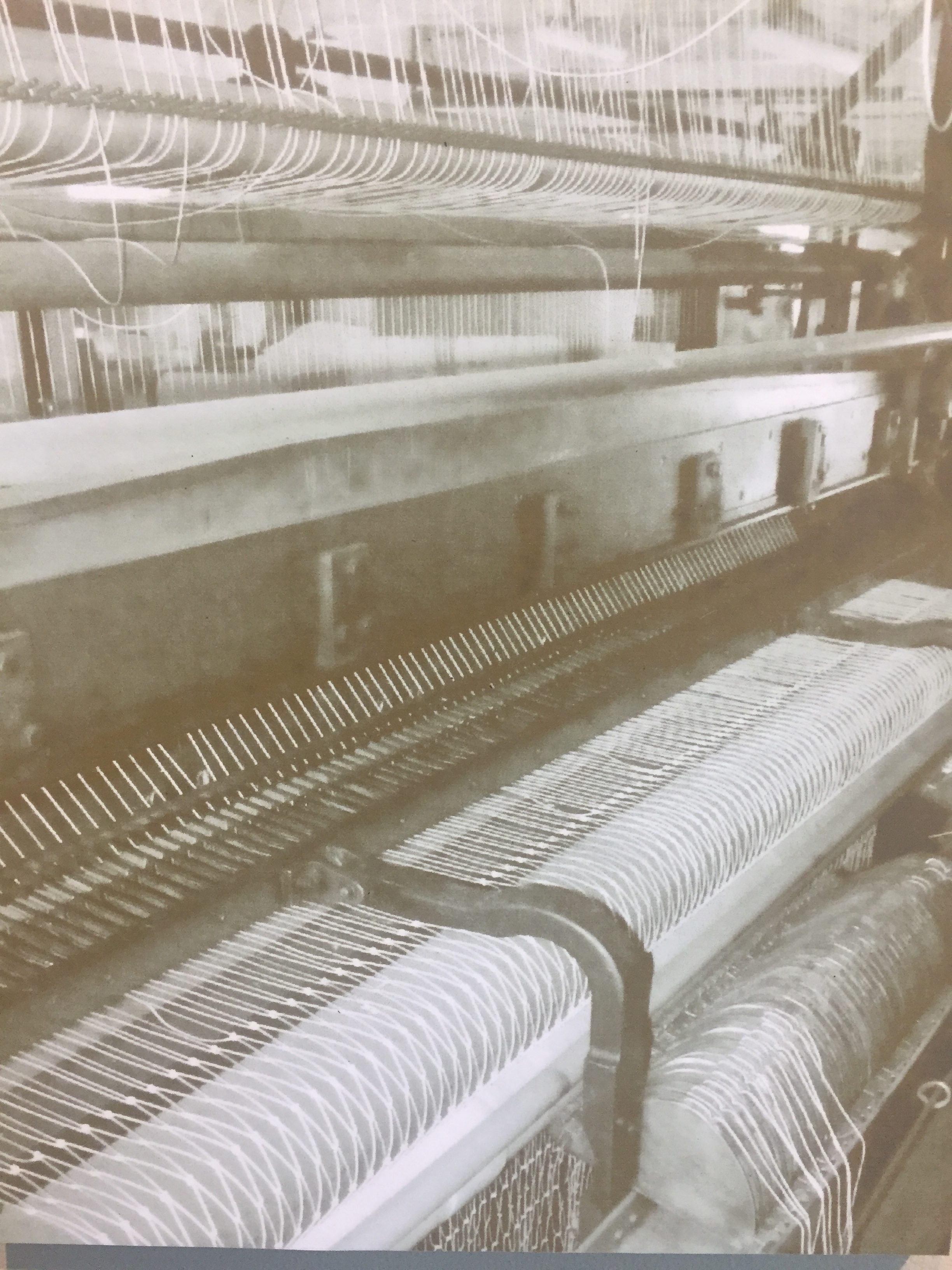 A close up of the knots

The twine made in these mills was also used for warps for rag rugs that were woven on industrial looms in this area, for sewing sails for boats,  and a finer cotton yarn was used in commercial sock making, and even the cotton string used inside yo-yos!  If this kind of history intrigues you, you can read more here.

The Moodus River is a tributary of the Connecticut River. It’s a small, fast flowing river that feeds into the Salmon River, which flows into the Connecticut River at Haddam.  In the hey day of twine making there were 15 mills along this small river.  If you happen to be in the area and want to take at look at the remains of some of these mills and the dam that used to harness the power, travel along Rte. 149 to the East Haddam Land Trust’s Hidden Valley Farm Preserve, and also  Grist Mill Road off Route 149 just east of its intersection with Route 151. The Bernstein Preserve is on Falls Road/Route 149.

Here is some of the interesting information about the  twine mills and net making on display at the Connecticut River Museum. 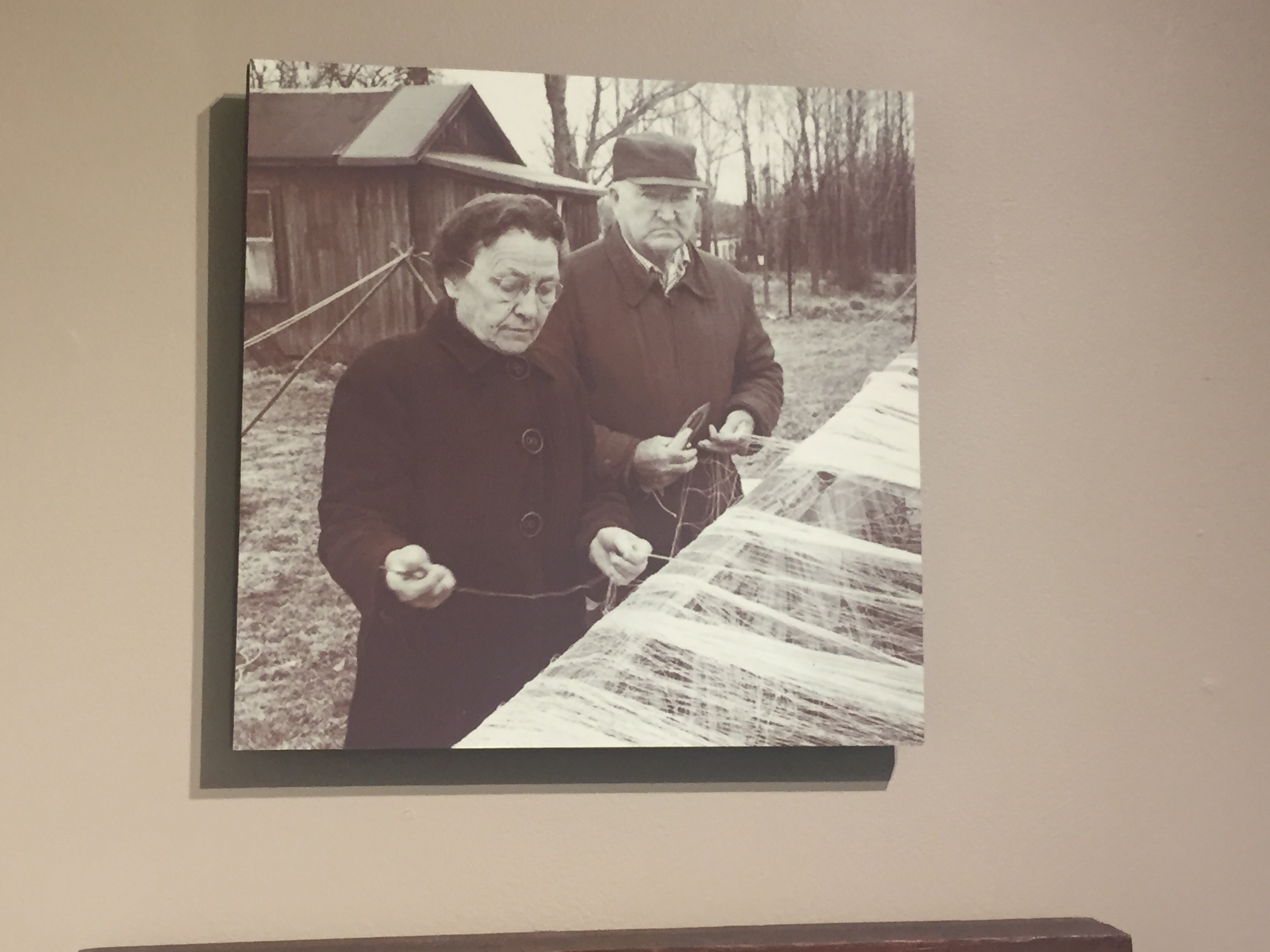 These are netting shuttles that are used to make nets by hand.  The very day that the shad festival was taking place in Essex, I was at the monthly meeting of my Connecticut lace group, and one of my good friends was teaching herself how to make netting with a shuttle just like one of these–an interesting coincidence! 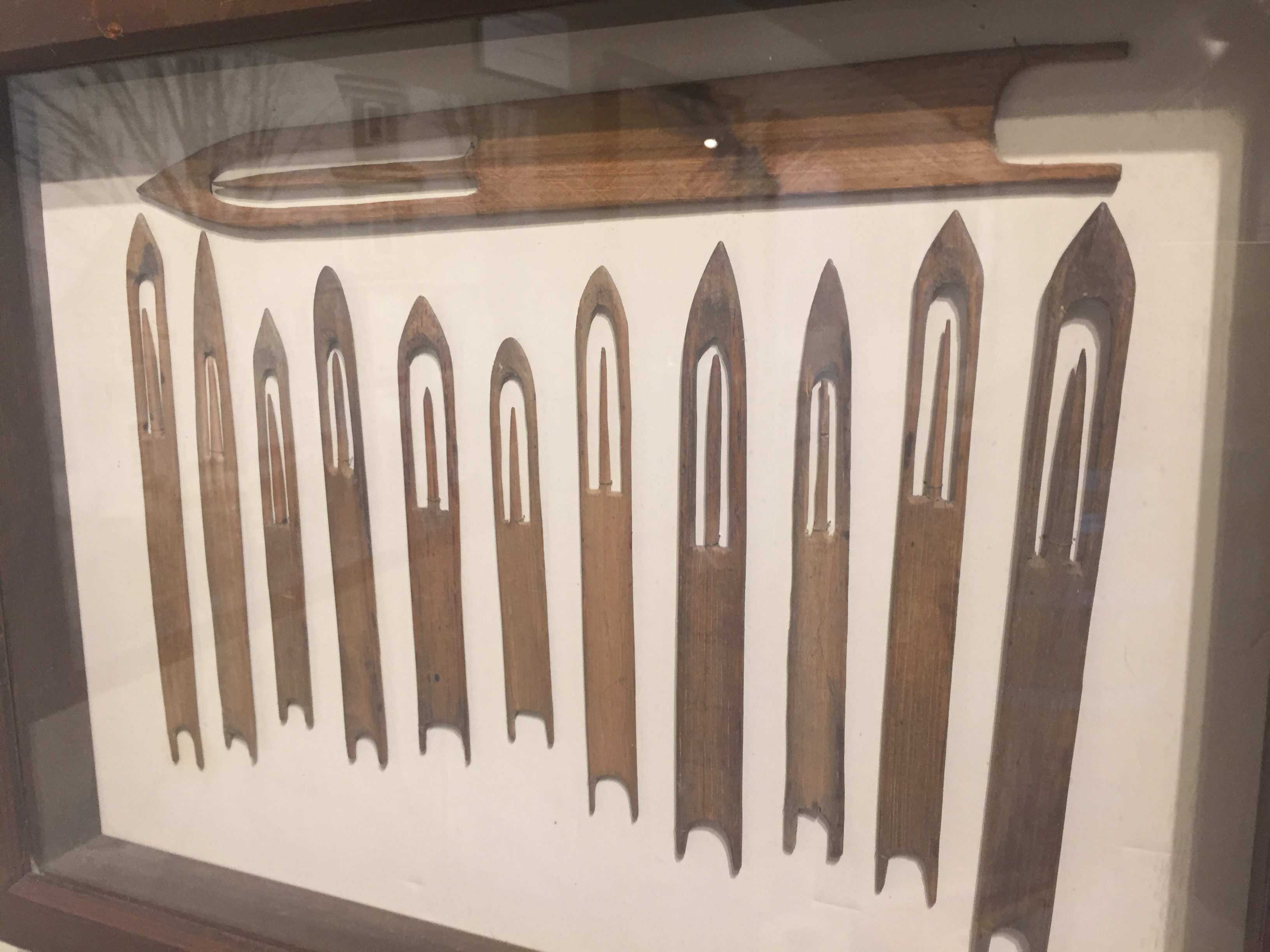 Another member of our lace guild made several small pieces of netting for Mary to for use in the centerpieces for our annual lace retreat on Cape Cod.  That little piece of netting makes just the difference, doesn’t it? It is just the right size to go with Mary’s driftwood sailboat with lace embellished sail!– and the tatted the tatted sea turtle!  Pretty impressive! Mary takes making these centerpieces very seriously! Each year she makes five or six centerpieces for our annual lace retreat that takes place on Cape Cod.  There is always a beach or seaside theme. 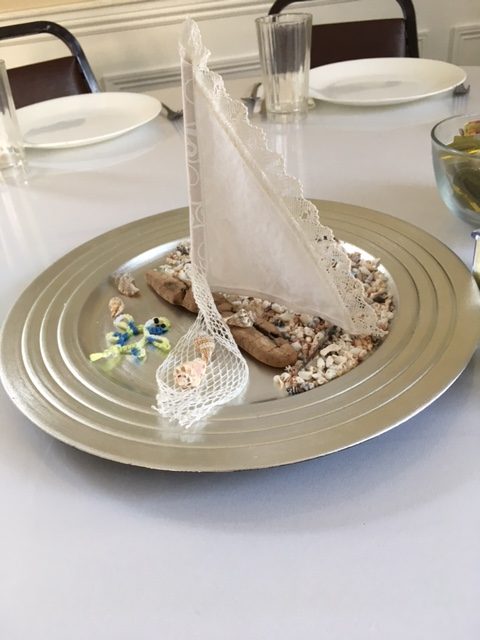 I am intrigued by the interesting history of my new home along the river.  Ship trade in the Caribbean gave Connecticut it’s name “the nutmeg state,” and the area around Willimantic had a number of silk mills, where local farmers tried their hand at raising silk worms for a few years in the hey day of the Industrial Revolution.  Although it’s not unusual to have textile production and ship trade coexisting in a community from that time period, it is interesting to me to live in such an area now, where I can enjoy the textile history and Bob can enjoy the maritime history.

I took this phoe of the Onrust at her new home on the river,  from the 3rd floor shad exhibit at the Connecticut River Museum.

A walk along the river at any time of year is beautiful, but maybe June wins because of the wealth of spring flowers. In early June azaleas and rhodies are at their height. 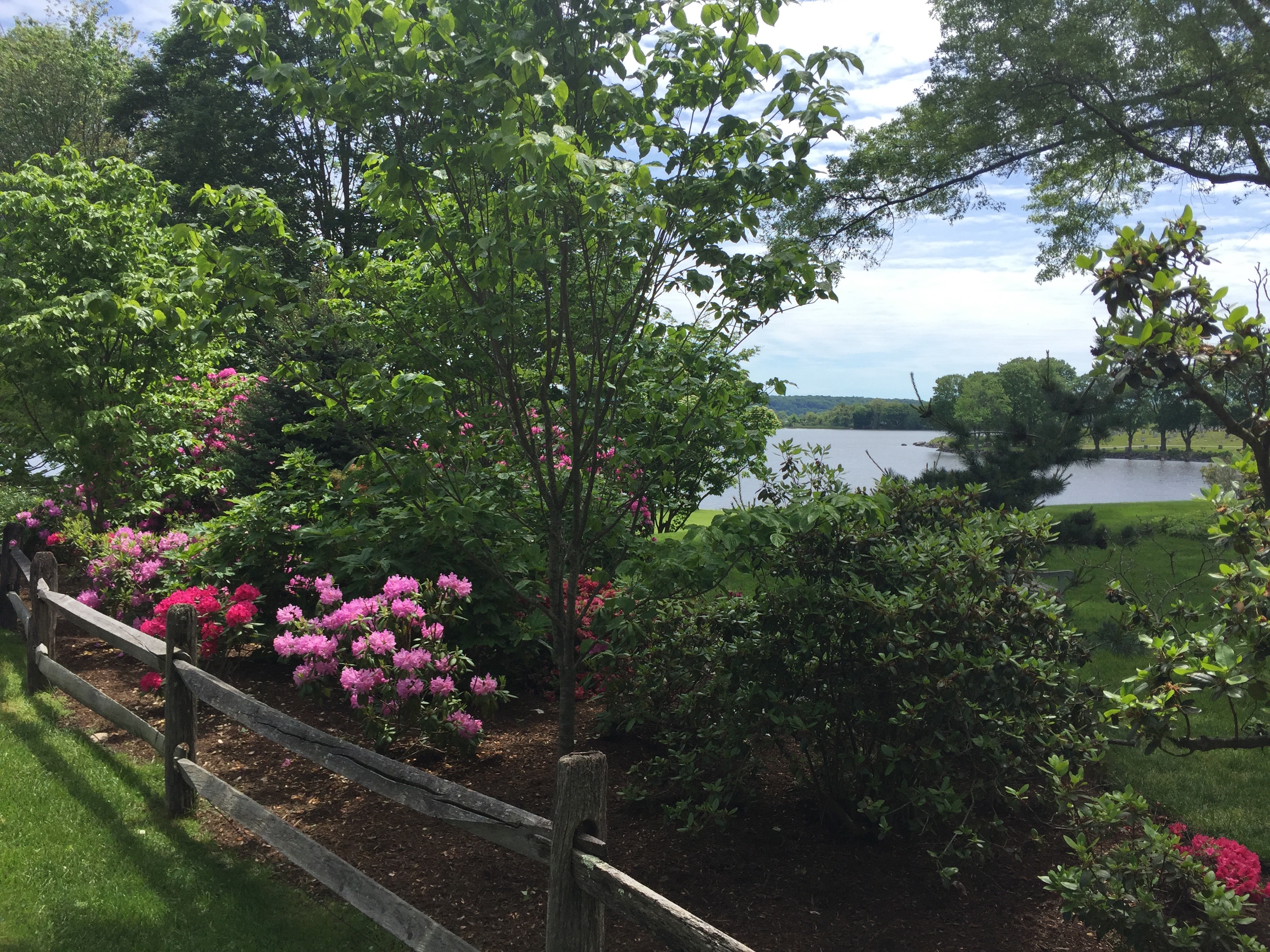 Peonies and iris are a fleeting burst of color in late May and early June. 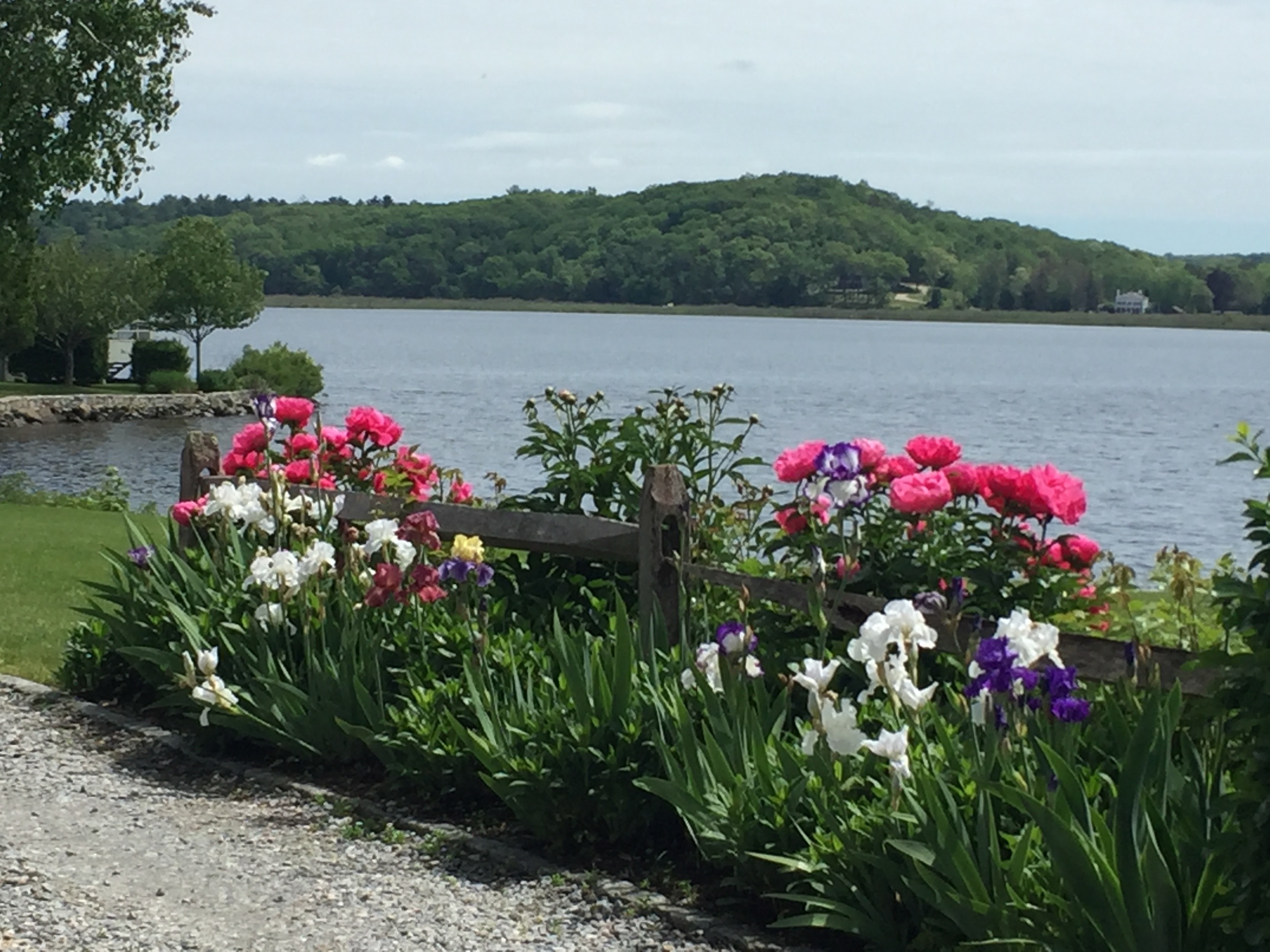 And the first roses of early June along the river. 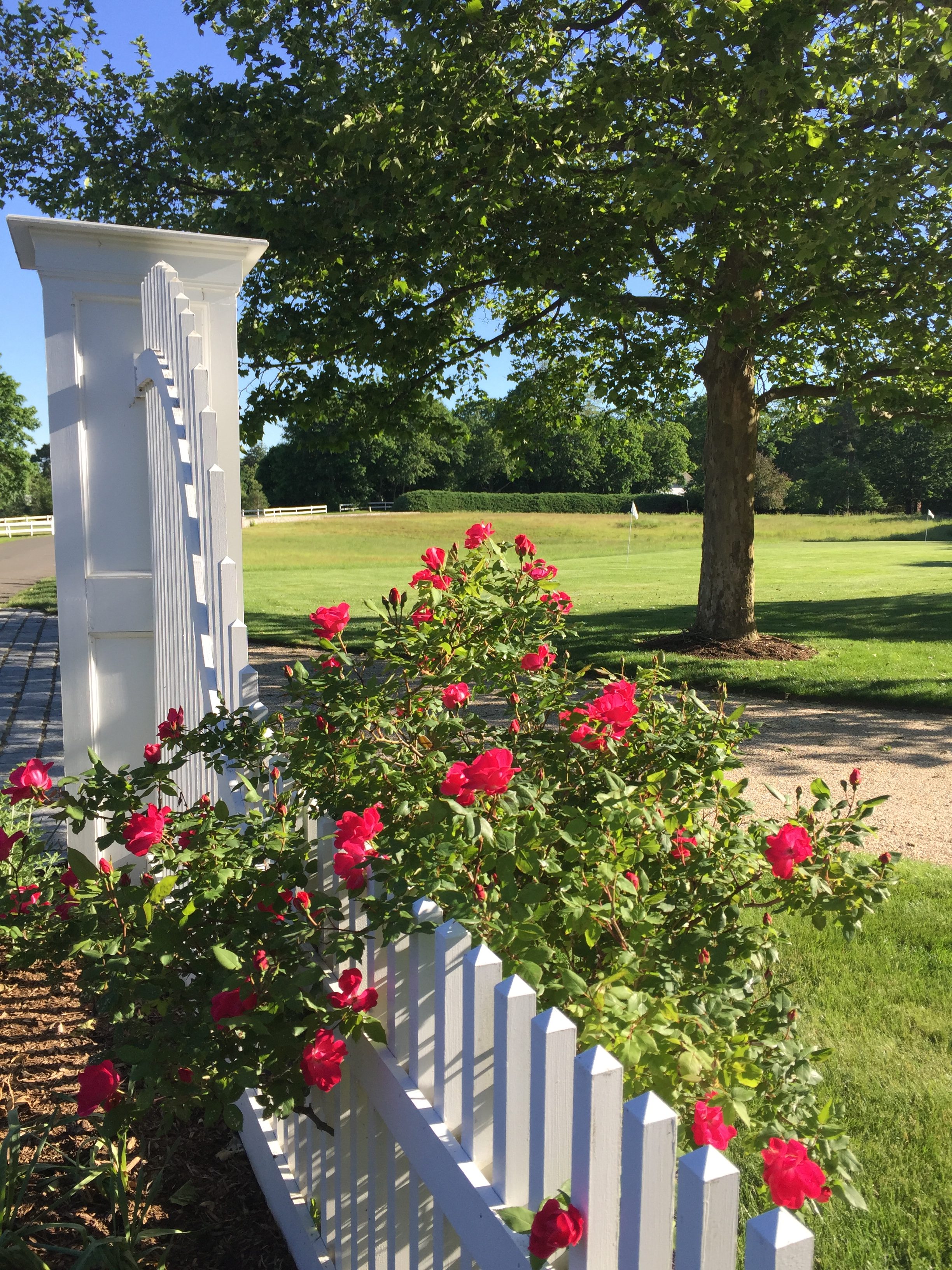 This entry was posted in sailing, weaving. Bookmark the permalink.

1 Response to When Weaving and Sailing Converge