I Love a Parade!!

Gosh!  I can hear Ethel Merman singing this song, and it’s not a good thing to have stuck in my head!  Still, who doesn’t love a parade?

Is all of New England like this?  I just can’t believe how many parades there are up in this area and how enthusiastic everyone is about them!  It sure makes me happy.  So, this is how Bob and I spent a perfect Saturday in June.

It started with a ride on the Essex steam train, which took us up to Haddam for the start of the Haddam Bridge Centennial parade! 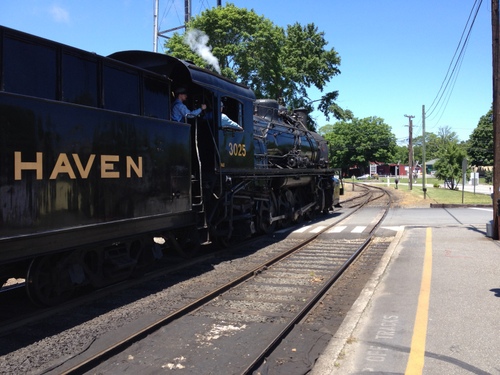 I’ve never seen a parade come across a bridge!  It was great fun!  I’ve now seen the Moodus Fife and Drum Corps at numerous parades in this area.  They are terrific!…and they have a wide range of ages in the group, from what looks like high school students to retirees! ….men and women! 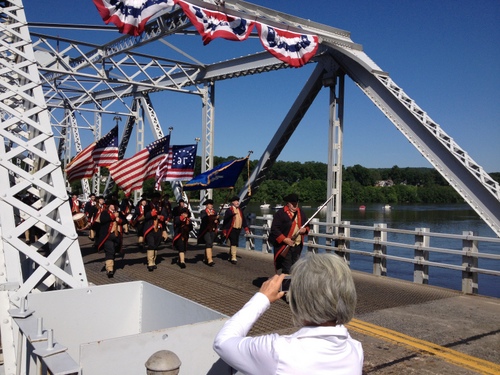 Next over the bridge was the oldest car in the area.  This looks like a horse drawn carriage that was fitted with some kind of motor and a tiller for steering.  There were about 30 antique cars in this parade, and they were all beautiful!

There was a ceremonial opening of the bridge, and isn’t it pretty with its fresh coat of paint? 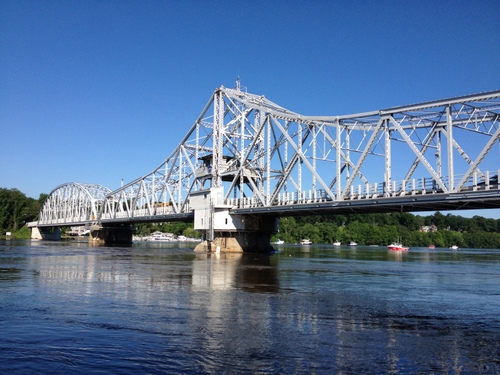 When this bridge was built in 1913, it had one of the longest opening spans.  On this June day in 2013, the river was very swollen with spring rains and the current was running hard.  The local ferry at Chester was not running due to the high waters.  The dock was under water, and the river currents were ripping by at more than 5 knots!

There were festivities all through the town of East Haddam, and we spent some time enjoying the views of the river and the Goodspeed Opera House, which is celebrating its 50th year.  This is a postcard New England town, and when it’s decorated for a celebration it is just breathtaking!

We crossed the river and boarded the Becky Thatcher steamboat for the second half of this great trip. 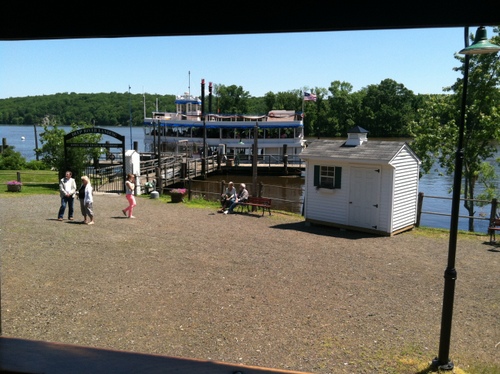 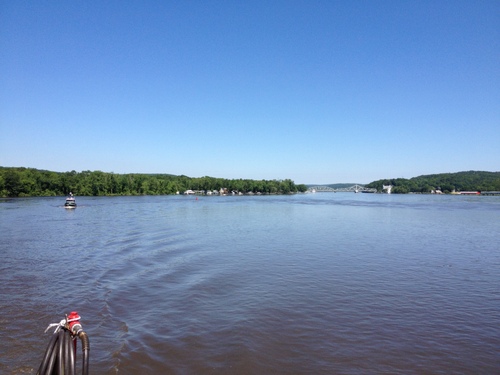 It’s hard to believe that the banks of the Connecticut River are still so rural and undeveloped.  In our area the river passes through hills called the Seven Sisters.  At the summit of the Seventh Sister is Gillette Castle, an eccentric dwelling built in 1853, by the actor William Gillette who played the role of Sherlock Holmes on stage for many years. 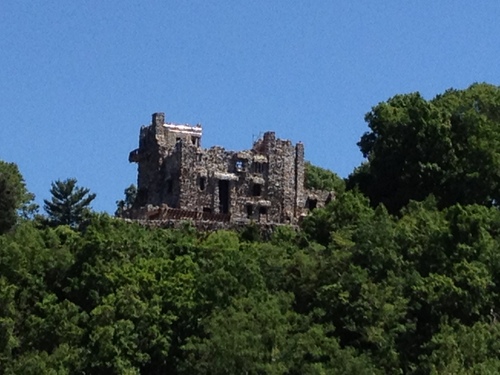 On the western shore on top of another hill in Deep River, is the Mount St. John school for boys. 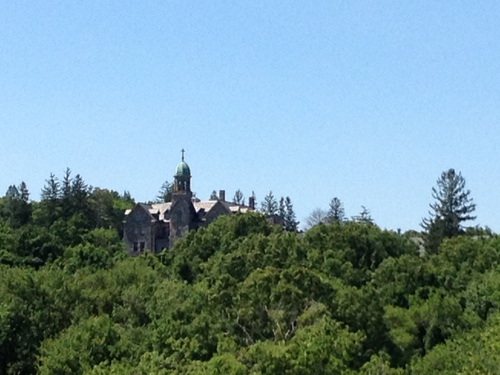 In Deep River we got back on the steam train for our return to Essex.  I loved sitting in the parlour car with comfy swiveling wing chairs!  I didn’t want to leave!

….and this was just the first half of our beautiful Saturday in June.  We then drove across the Haddam Bridge on our own wheels to visit the Salem Herb Farm. 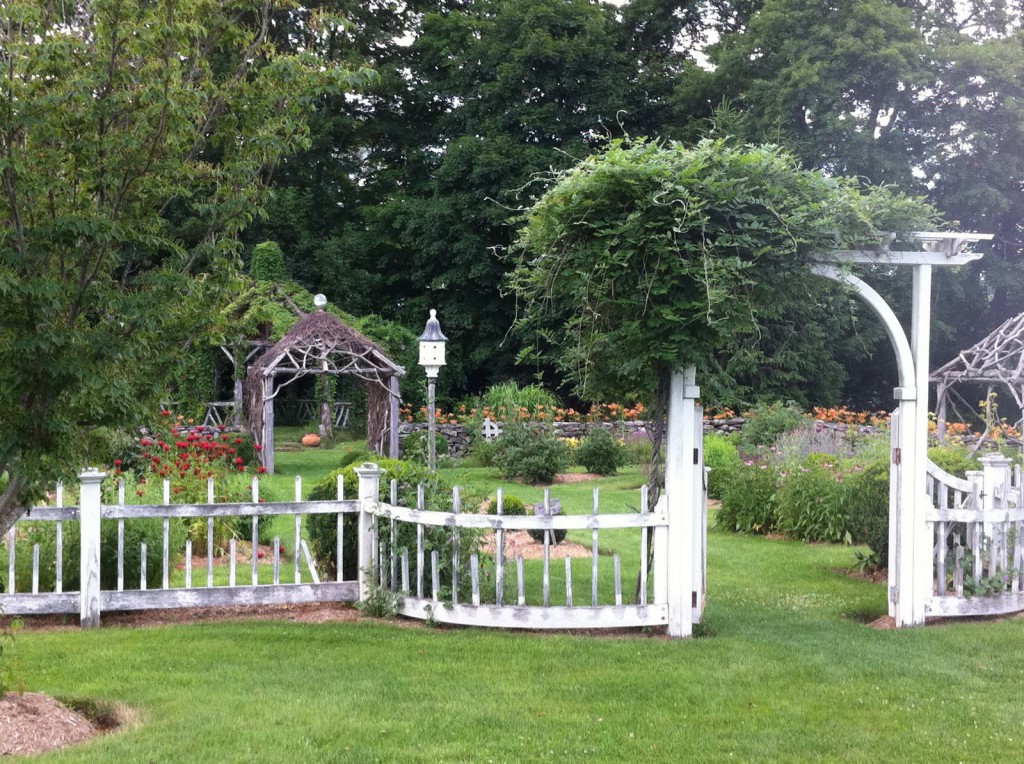 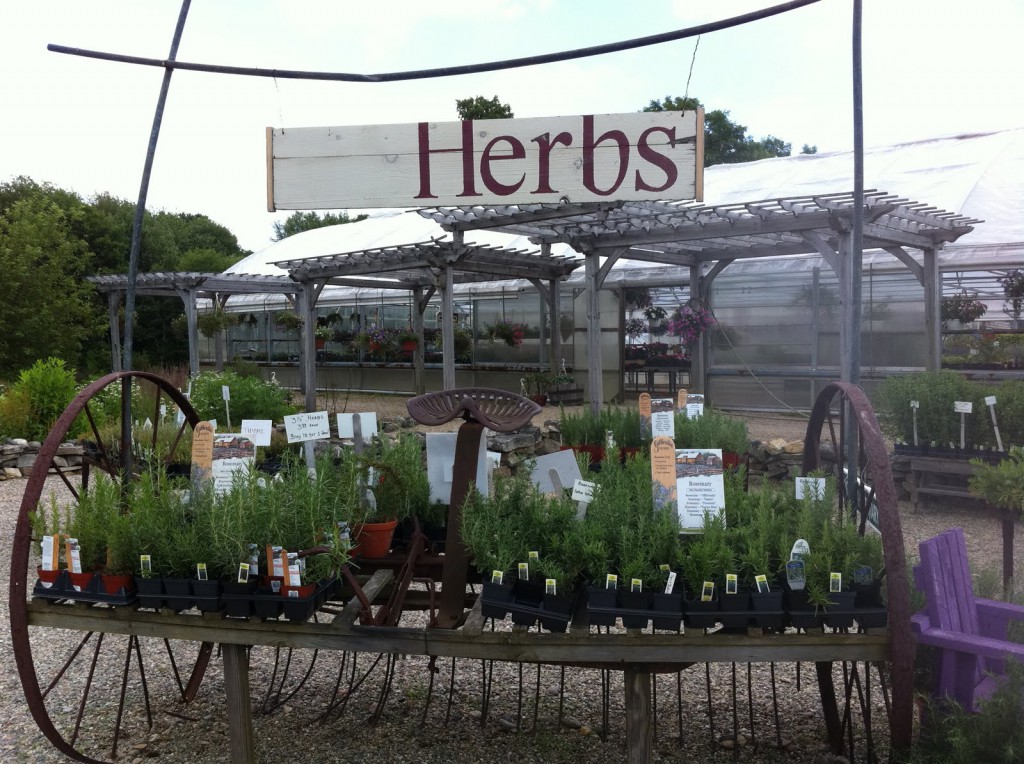 I met my friend Jody who works at the farm.  She grows a large field of garlic at her own home, and now is the time of year when she cuts the scapes in order for the plants to use their energy toward making bigger garlic bulbs.  The scapes are good used like chives, only with a powerful garlic flavor.  Jody loves using scapes to make pesto, substituting scapes for basil.  I thought that was a wonderful idea at a time of year when scapes are plentiful and basil is not quite yet!  So last night’s dinner was scape pesto on linguine with a salad of local lettuce and hothouse tomatoes….a delicious way to end a beautiful weekend! 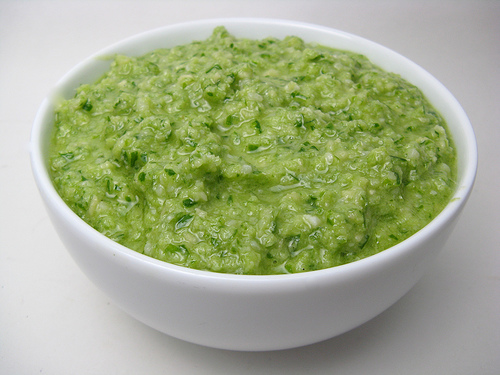 This entry was posted in gardening, spring, Uncategorized. Bookmark the permalink.

1 Response to I Love a Parade!!