That’s an odd assortment of names in the title, yet that is the diversity of what we have seen on this island!

The weather has us pinned down off the southeast coast of St. Kitts. There are no harbors here for protection, which is the case for many of the West Indies islands in the Caribbean, and boy do I miss the protected harbors on Antigua. After sailing from Antigua last Saturday, we attempted to anchor off Nevis, but the best anchorage area was too rough! It was only 2pm in the afternoon, so we sailed about seven miles further to White House Bay on St. Kitts, and then had to move again for more protection. We were finally settled, although not comfortably, just before sunset. The winds have been quite strong, which is typical for this time of year. They are called the Christmas winds and usually last until the end of January.

The capital of St. Kitts is Basse Terre, and in the center of the city is a roundabout with a clock in the center called Piccadilly Square. 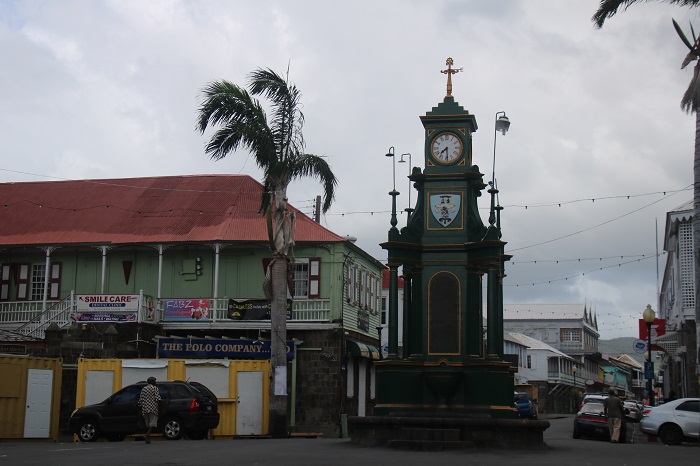 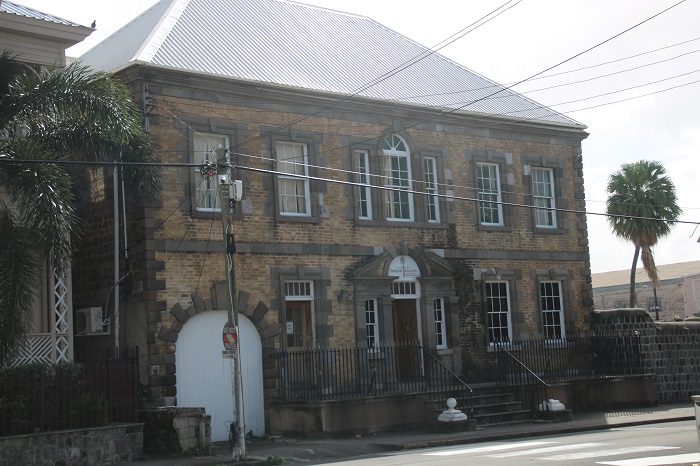 Cruise ships arrive almost daily in Basse Terre, and we can see them come and go from our anchorage, a few miles to the east. There is a hospital ship in the same area that has to leave every time a new cruise ship arrives. We learned that this ship is a medical school and that since the destruction of the medical school on Dominica this ship has taken on the faculty and students from that university. We watch it come and go every day to make room for the large cruise ships. I wonder what the faculty and students think of that. I’m trying to wrap my head around the students practicing surgical procedures on a vessel that has to be rolling around even slightly, in spite of having stabilizers.  I contemplate over each evening as we watch the sunset from Pandora. 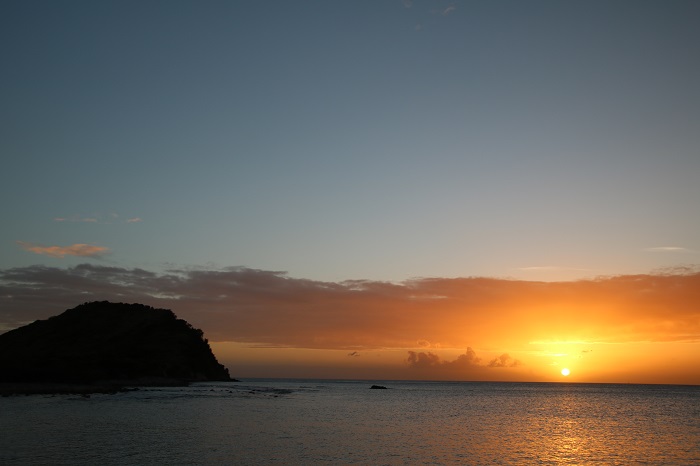 Yesterday we hired a tour guide to drive us around the island. Normally Bob and I detest this kind of touring, but this island has many windy roads and switchbacks that lead through the mountainous terrain, and driving is on the left. It was a smart decision not to tackle it ourselves!

Alexander Hamilton was born on nearby Nevis, and Thomas Jefferson’s great-great grandfather had a large plantation here on St. Kitts. The plantation has become a historic site here, no surprise, as well as the site of a botanical gardens and a local business of women who make batik fabrics. I’m quite fascinated to learn—so late in life!—that some of our founding fathers had such exotic origins! Years ago I visited the home of George Washington’s family, Sulgrave Manor, that seemed to be ‘right down the street’ from Princess Diana’s ancestral home Althorp. Both these family manses are in Northamptonshire, in the UK, so not so exotic. Still, I was well into adulthood before I ever gave a thought to exactly where our founding fathers originated. I just vaguely thought of them all as English. History is far more interesting in the details, isn’t it?

Romney Manor was first the site of gardens for a man named Tegereman who was chief of the indigenous tribe of Caribs. By 1625 this site had become a beautiful Euorpean style home for Sam Jefferson, Thomas Jefferson’s forebear. 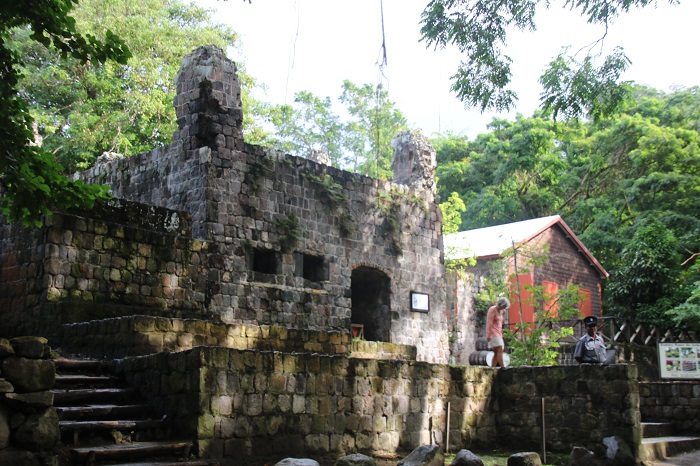 The gardens are good mix of natural landscape and cultivated gardens. 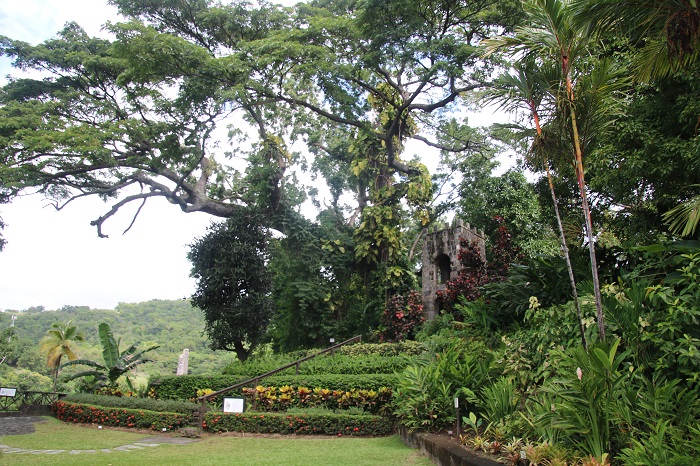 It would hard to ever leave a spot like this…..more lemonade, please! 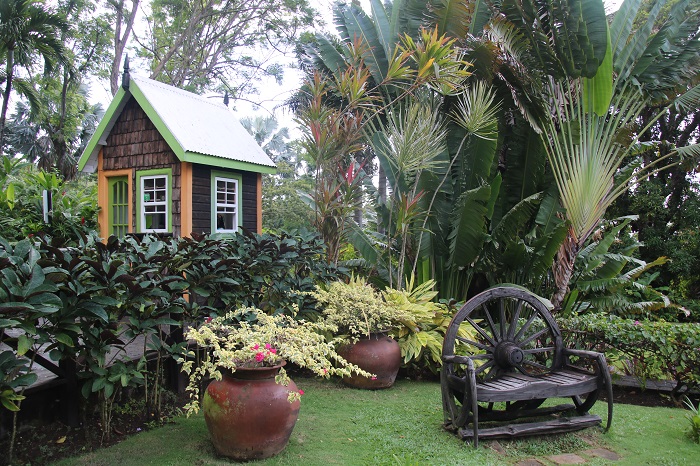 Along with the gardens, which are well cultivated and include beautifully landscaped areas of quite a variety of tropical plants, a group of women also run a textile business on the property of the plantation. The women make wonderful batik fabrics and their business, which started in 1976, is called Caribelle Batik. After 40 years, they must be on their 2nd or even 3rd generation of women keeping this technique alive and well. I’d say I was watching the 2nd generation of master batik makers demonstrating for the tourists, since all of them were about my age.

The shop was full of about anything you can dream up to make with batik fabric.  There were wall hangings, clothing, all kinds of little containers, pillow covers.  I bought a nice selection of things to bring home for friends and family. 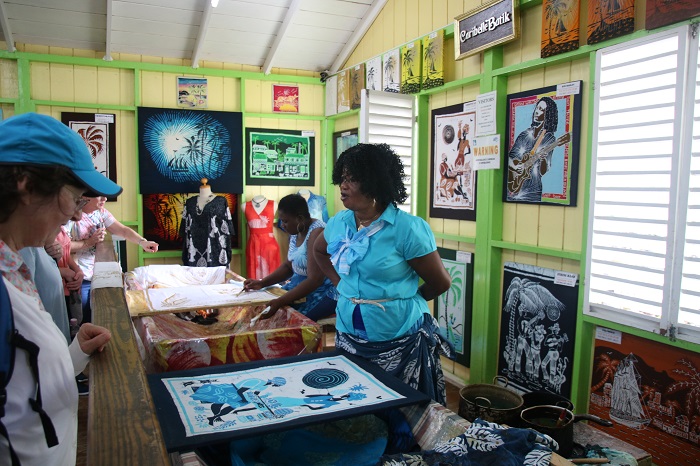 The designs are drawn with a stylus filled with melted beeswax. 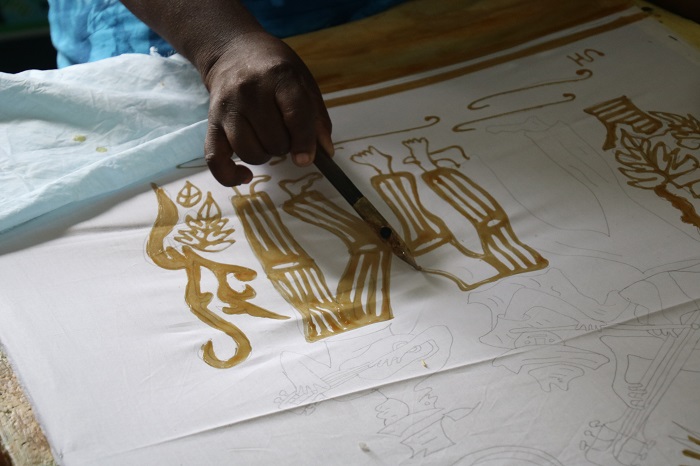 They do intricate designs, and the best thrill of all was walking through the gardens, surrounded by exotic plants, views of the ocean, and lines and lines of batik fabrics drying in the breeze. I think this will be the highlight of my winter! 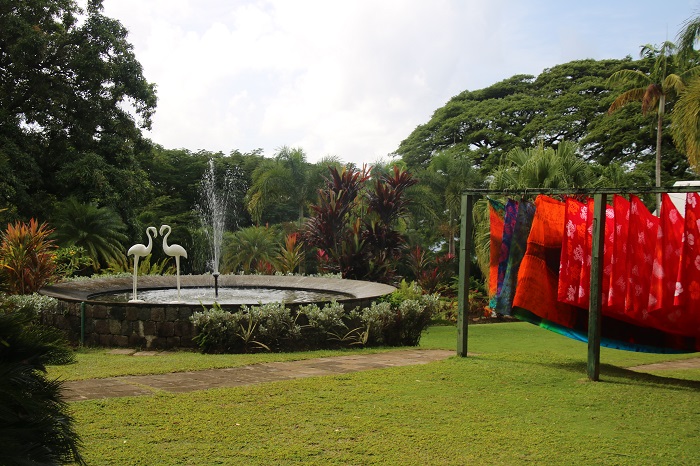 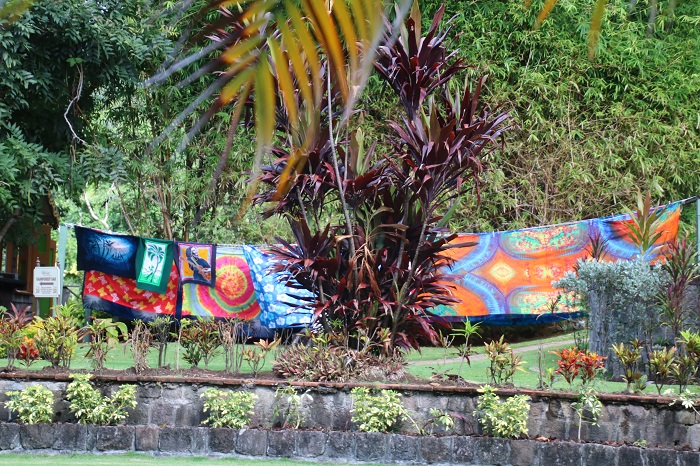 In addition to a rainforest full of exotic native and not so native plants that have found there way here, St. Kitts also has a large colony of green monkeys. They are everywhere! Our guide told us that they were brought to the island by the French, who brought them on their ships from Africa, along with their human cargo destined to be slaves. Some islanders have taken young monkeys for pets. I got accosted by a heckler, who came up from behind and just put this monkey into my arms. I didn’t mind, but I would have preferred to be asked. I guess he knows well that if he asks, most people will say no. It’s better to just throw a monkey into your arms and grab your phone before you have a chance to think. It’s the way of life in this part of the world, so it’s best just to go with it. Cute monkey, isn’t it?….wearing a diaper, thank heaven! 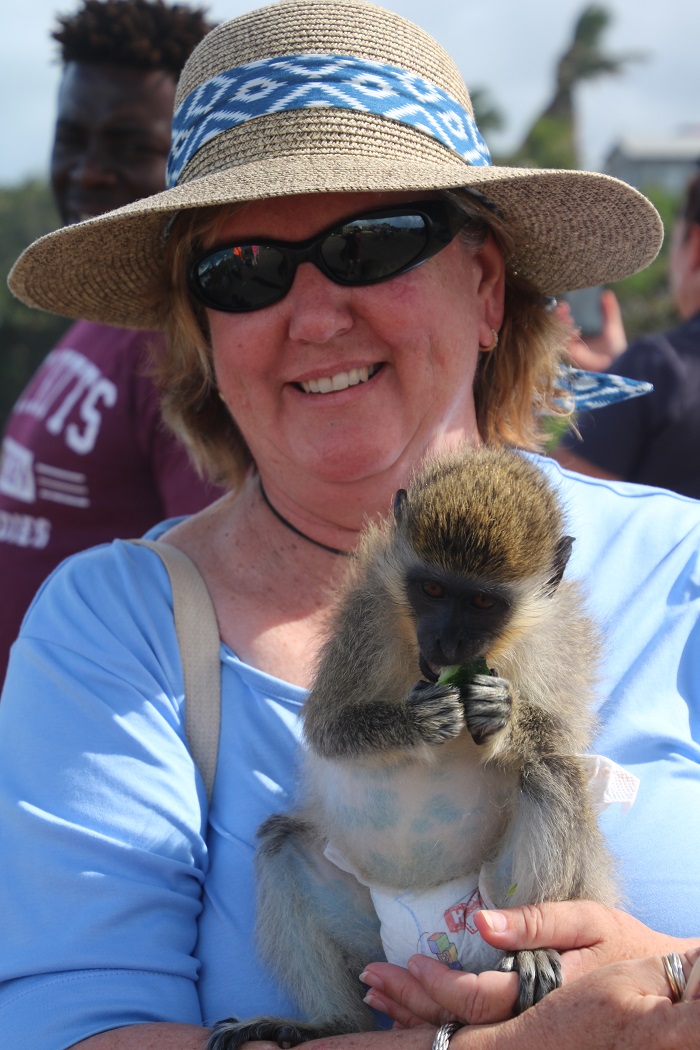 We had stopped for this view when the ‘monkey man’ approached me. 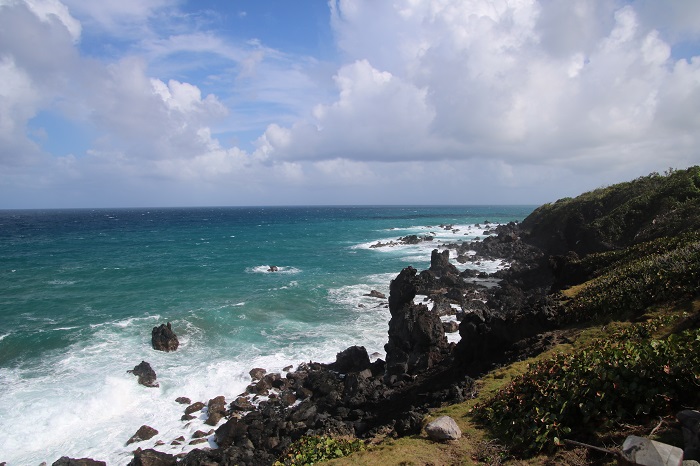 How about a monkey in its natural setting.  They are pretty shy so we haven’t gotten close to the wild ones. 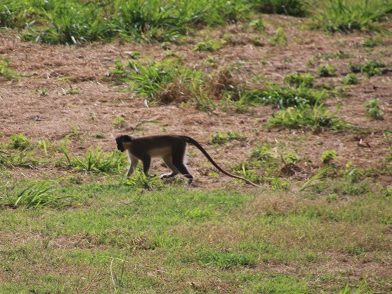 In the middle of our day our tour guide took us to a local restaurant–just a couple of picnic tables under an awning, with a ‘kitchen’ in an attached shed.  No refrigeration.  Our guide said all the food was prepared daily so no need to refrigerate anything.  Well, hmmm.  The choices were pretty varied, so it’s hard for me to imagine that they used everything up everyday. 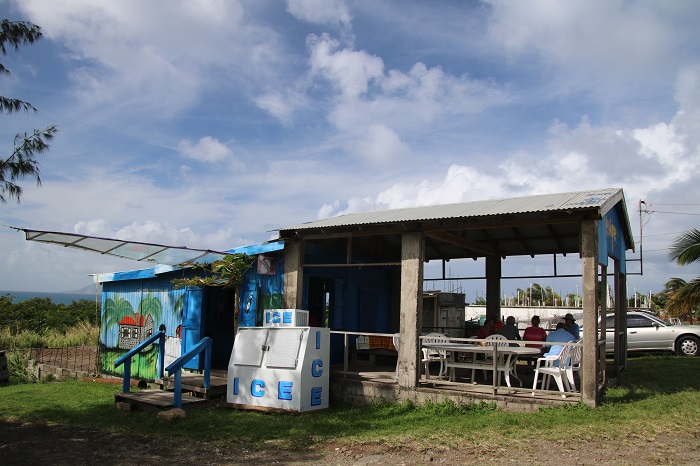 Yeah, I know!  It looks pretty rough, and I’ll admit that I was nervous about the food.  It was all delicious–barbecued pork ribs, rice and pigeon peas, green salad, and Caribbean mac n cheese.  Others had baked chicken, or baked mackerel with same side dishes.  No one got sick.

I am staying onboard today. The wind has abated, although our weather guru says it’s best not to change locations until the weather is more settled at the beginning of next week. Sheesh! It’s only Wednesday! I plan to spend some time working on a small tapestry that is getting embarrassingly old, and then I will spend some time on my little Norwegian woven band. Later we will meet our cruising friends for sundowners at the beach bar, SaltPlage, where the view of the sunset will extraordinary!  Well, as you can, we already had our sundowners…I could not get this post online yesterday. 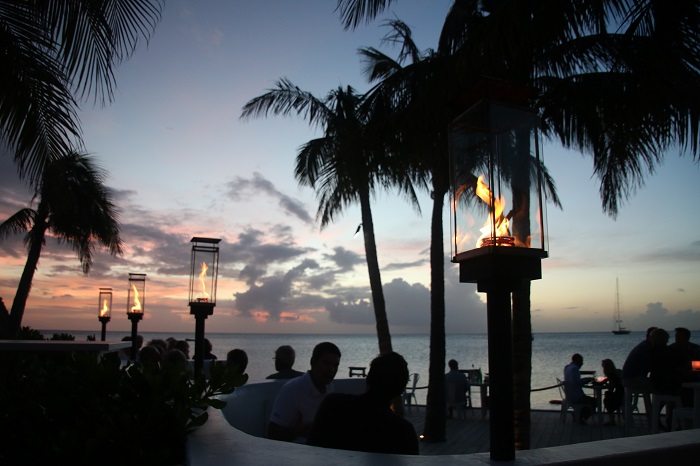 So, that’s my report. St. Kitts is an interesting and unusual mix of history, lush flora and fauna, and beautiful local textile work.  All good for me.