By the end of this brief month we’ve been home we will have visited our older son and his family, which includes our delightful granddaughter Tori, three times.  That is a LOT of driving, and it always includes a trek through New York City… and that brings back memories from the decades we lived in New Jersey.

On our last trip home, after Tori’s 1st birthday party, we drove into the city for an appointment that should have taken place over the summer.  It was a sparkling mid-December day, where the snow that had blanketed most of the northeast had already melted on the city streets.  It was the morning the suicide bomber had set off his pipe bomb in the subway near Times Square.  Hearing this news, we decided to avoid the West Side, so we took the Holland Tunnel.  What a view with the sun directly behind Freedom Tower! 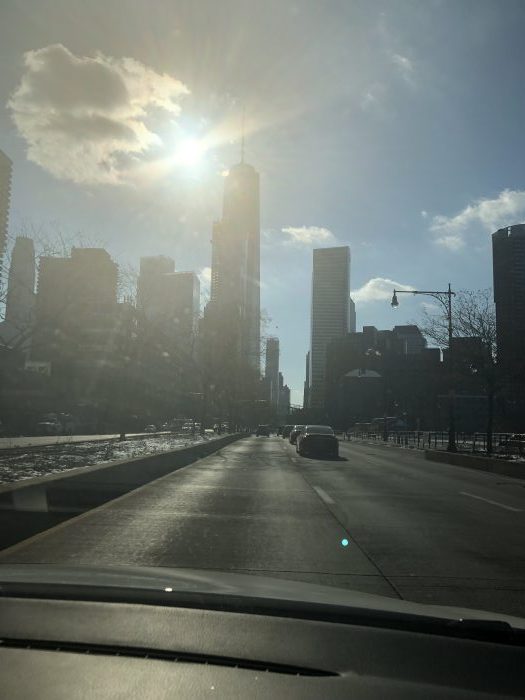 We drove down to Battery Park to get on the East Side FDR. 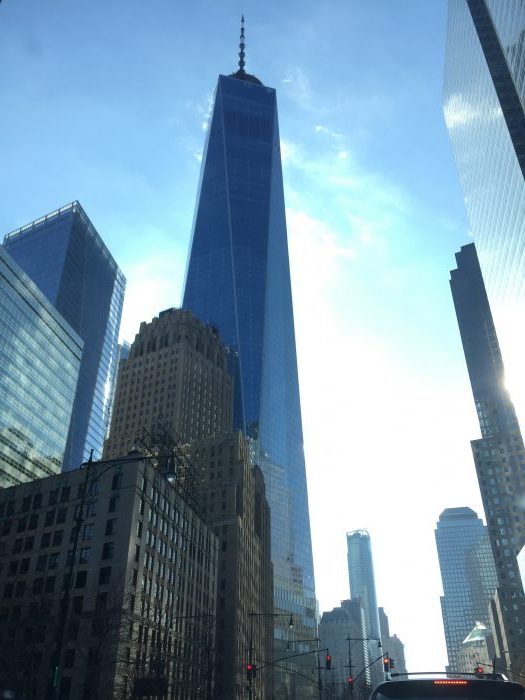 What memories!  Foremost in my mind was a very different day–a late summer day in September, five years ago, when our son Christopher met us at Battery Park.  We were onboard our last Pandora, and Chris was on his bike!  We said our goodbyes across the water, and I was crying.  It was our farewell moment at the beginning of a 9-month trip down the east coast of the US and across to the Bahamas, where we spent  4 months sailing about 1,000 miles among the islands from the Abacos, the Berries and the Exumas, before retracing our tracks back up the eastern seaboard.  I’d never been away from home that long before–actually haven’t been away that long since either.

Chris first met us near Gracie Mansion, where Hells Gate flows into the East River.  He took this wonderful panorama of us. We were alone on the river that morning.

Then we raced him down to Battery Park, Pandora against Chris on a bicycle.  We won, by only 10 minutes, and he had to navigate far more traffic than we did that morning! 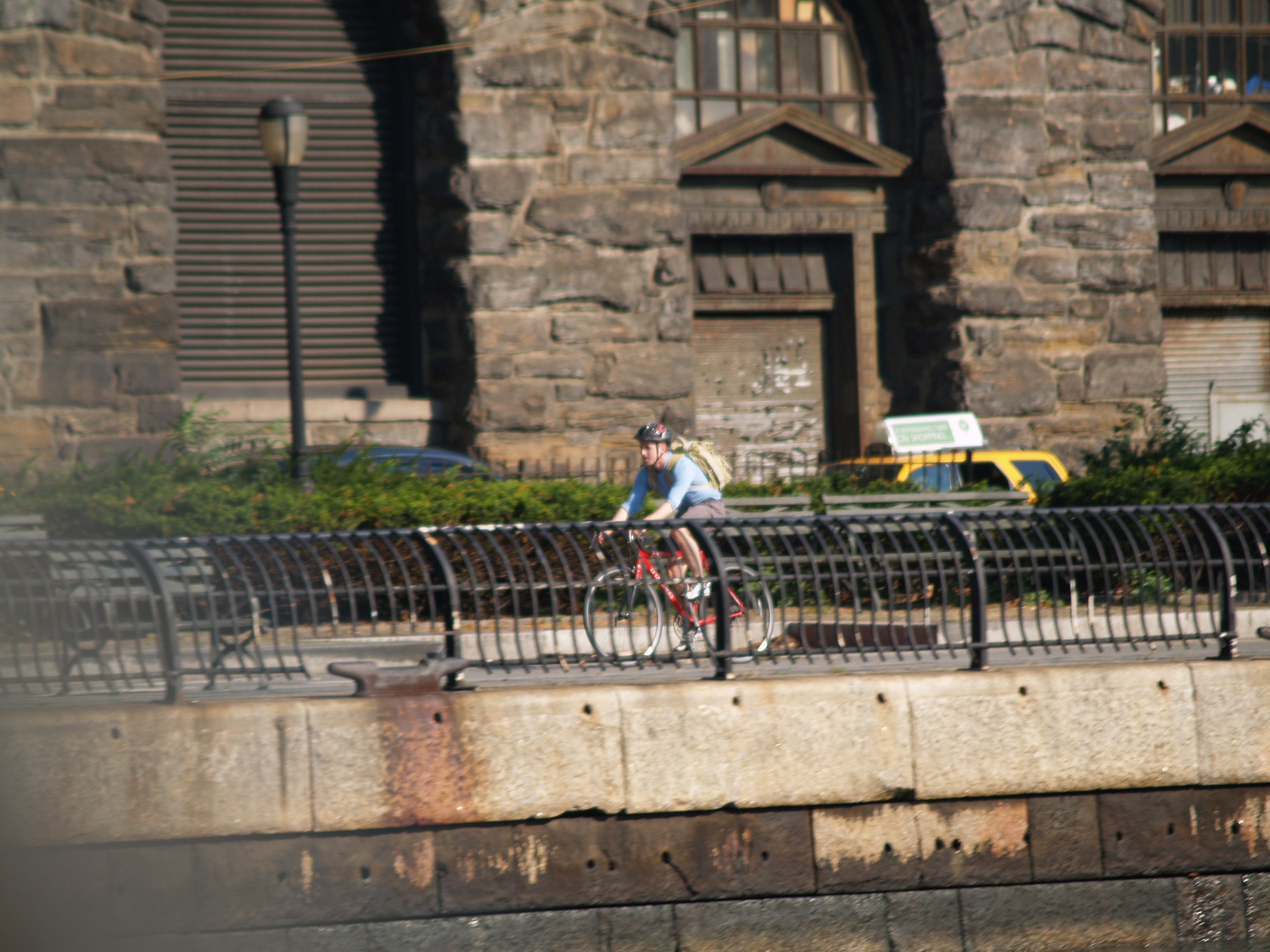 While we lived in New Jersey, I almost never had an occasion to drive on the East Side, so driving up the FDR brought this single memory back in full force.  I can still feel the breeze and smell the river and the city from that September day. What a difference a few years make.  Chris was at the beginning of his doctoral studies; Bob and I were neophytes at long distance sailing.  Now Chris has been working in quantum physics for a couple years, and Bob has put 10,000 miles under the keels of two Pandoras since then.

This December day, we parked our car near the East River and walked west into the throngs of midtown… past Lex and Park and Madison, and on to 5th Ave.  It was fitting to me that Saks has chosen Snow White as the theme for this year’s windows.  Our little Tori seems like Snow White to us with her ivory skin and dark hair.  I wish she could have been with us to see this! 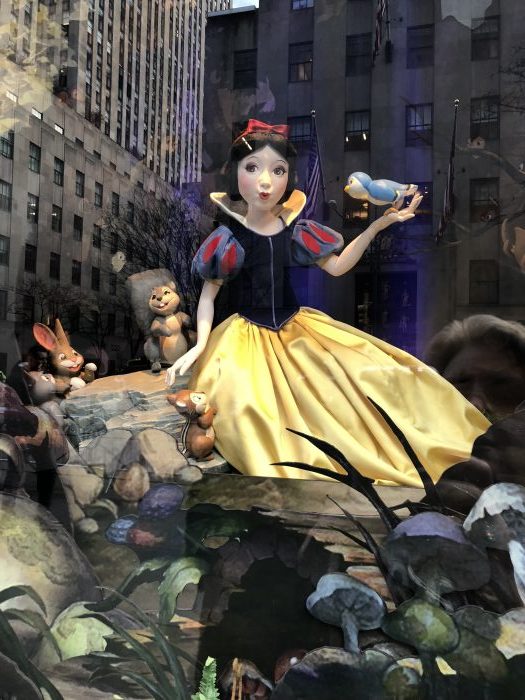 As it happens, Tori’s Mom loves Mini Mouse, and now so does Tori.  I made Tori a Mini Mouse dress to wear for her birthday, and her parents decided to have photos taken to commemorate this milestone.  We don’t have any of the final photos yet, but here are a couple of proofs. I love the middle one (kind of wish I’d made her a Snow White dress, though!).

During our visit for Tori’s 1st birthday party, the first snow of the season fell on the day of her party!  Grampy gave her the first taste of snow. 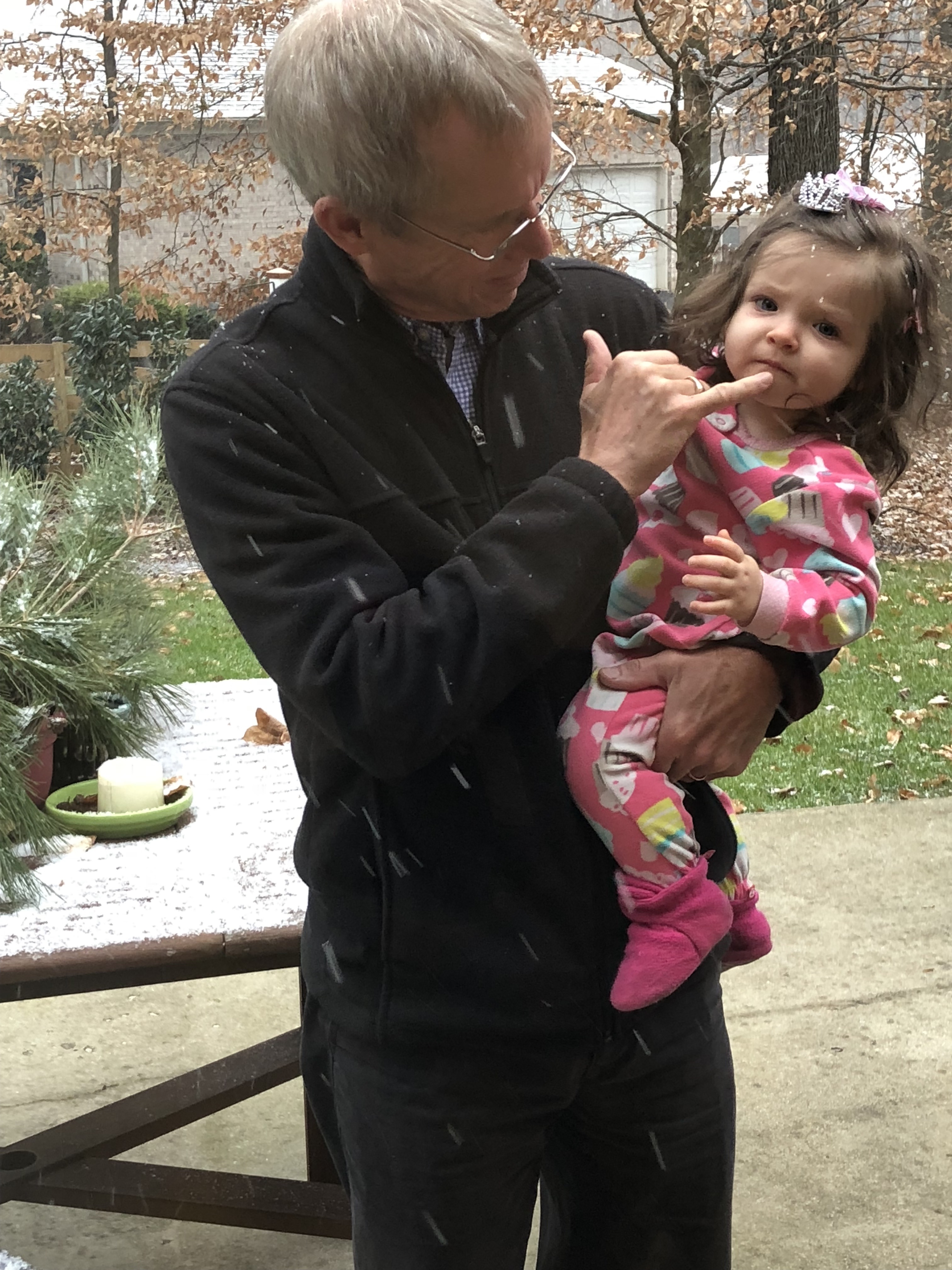 The rest of us made party preparations.  Kandice had seen this Mini Mouse fruit bowl on Pinterest, and Rob and I enjoyed creating it! 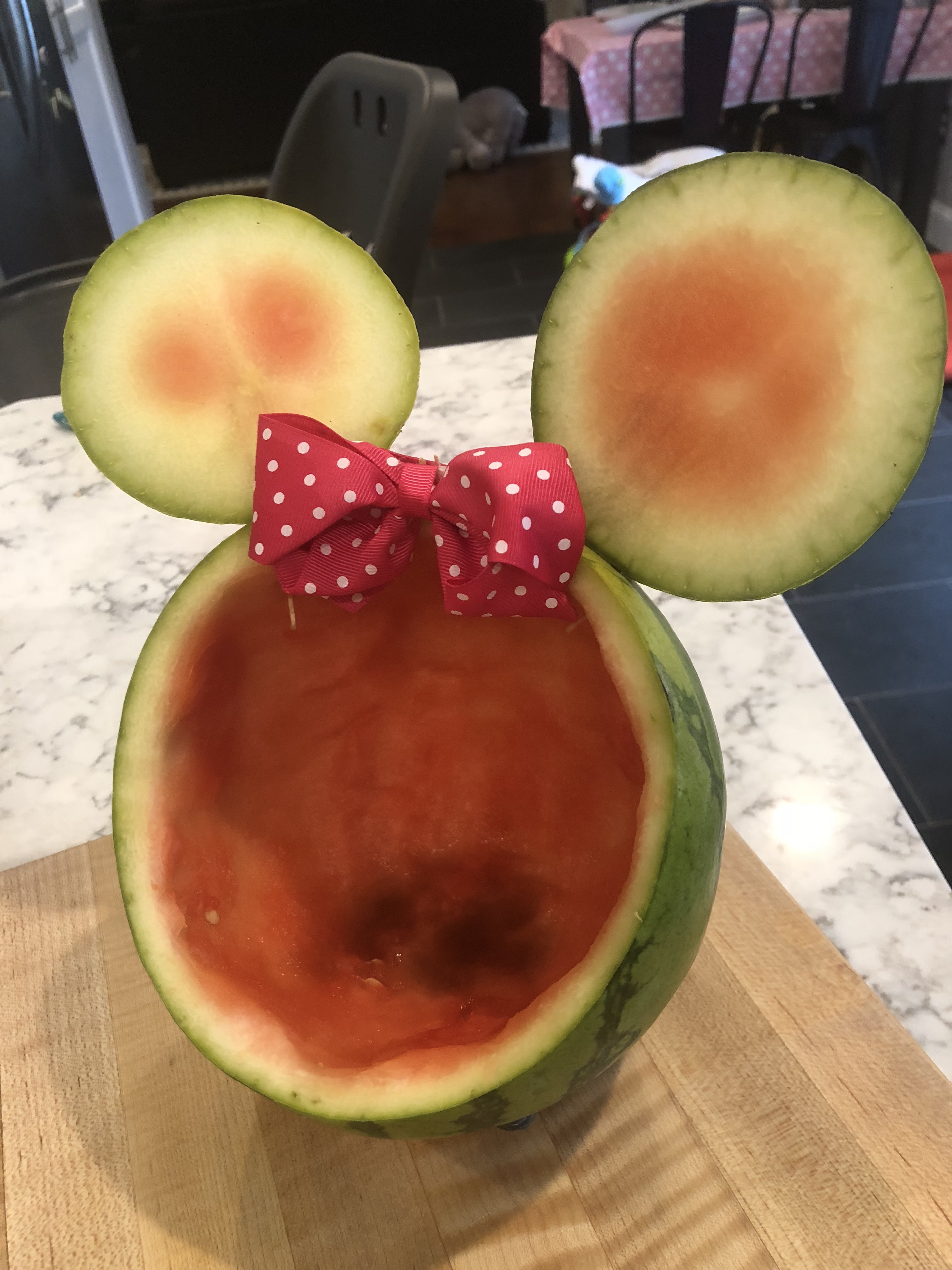 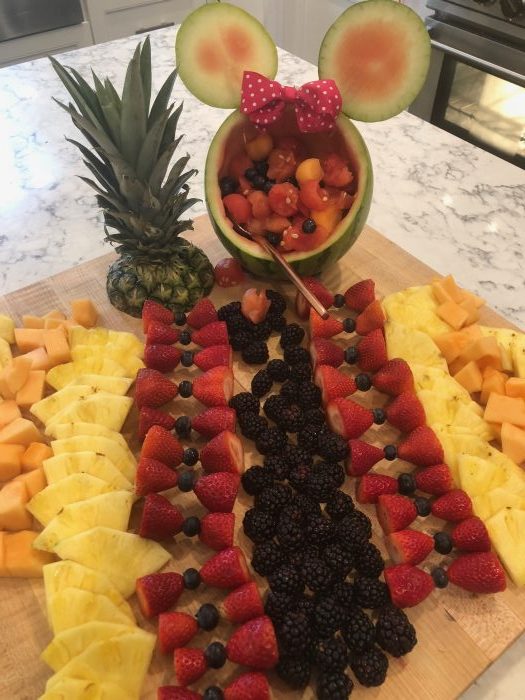 Rob and Bob finished decorating the huge tree.  We always say that Rob likes to “Clark Griswold the heck out of Christmas”–and he does. 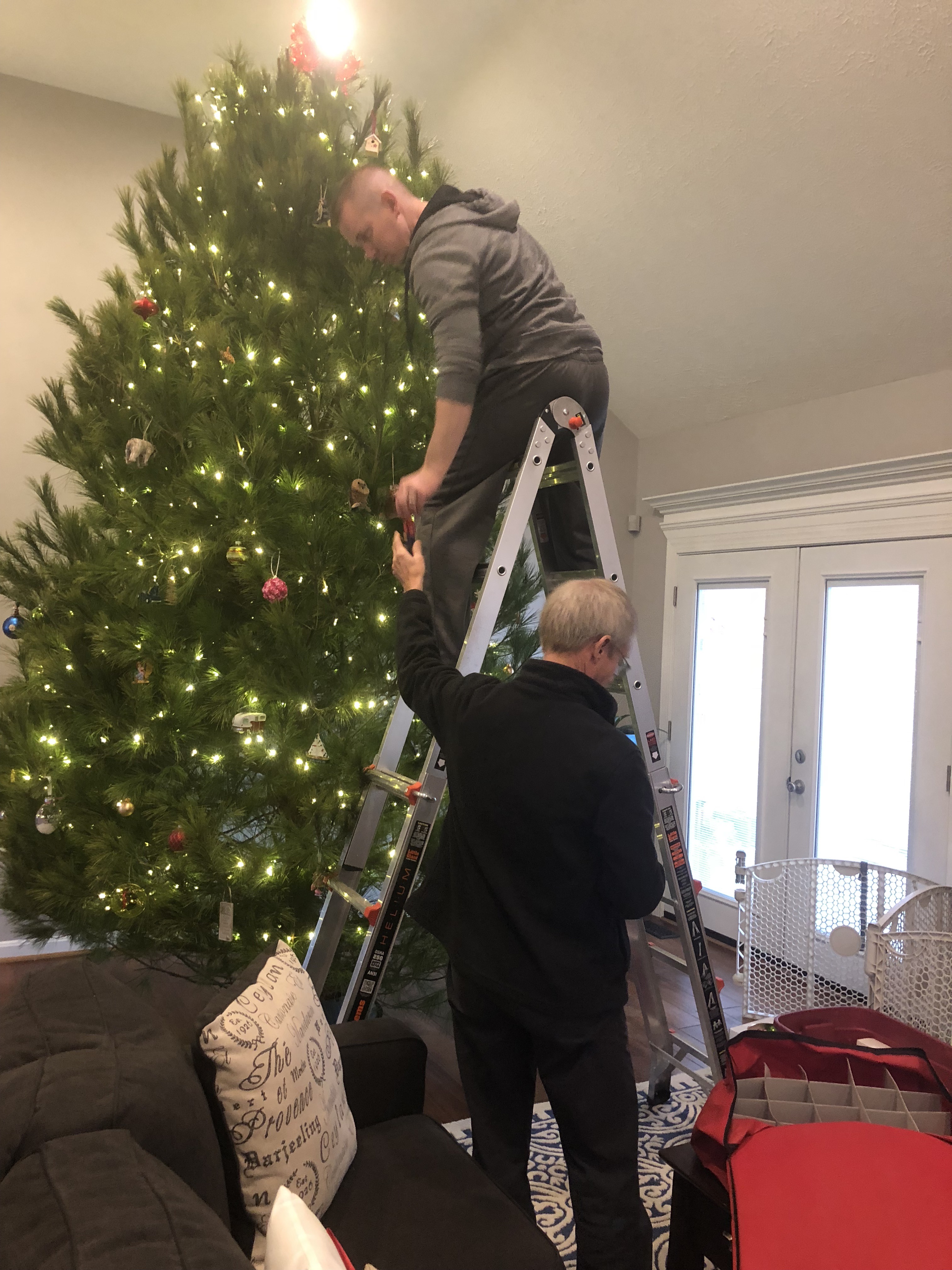 But….back to our drive through New York….our appointment was only half a block from THE TREE so we had to take a moment for that.  Due to the earlier incident with the bomber, the streets were heavily patrolled by policemen in groups, all carrying automatic weapons.  I haven’t seen that kind of police presence since the 70s in Rome, but I will refrain from saying more. 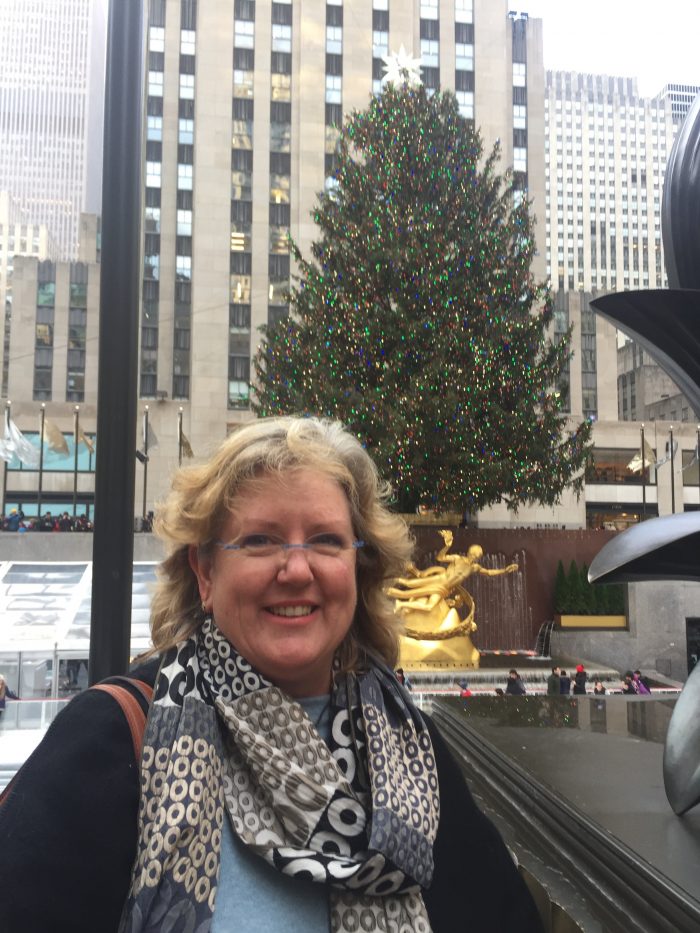 The promenade and the shops along it were still as festive as ever.  My favorite shop is Penahaligons! 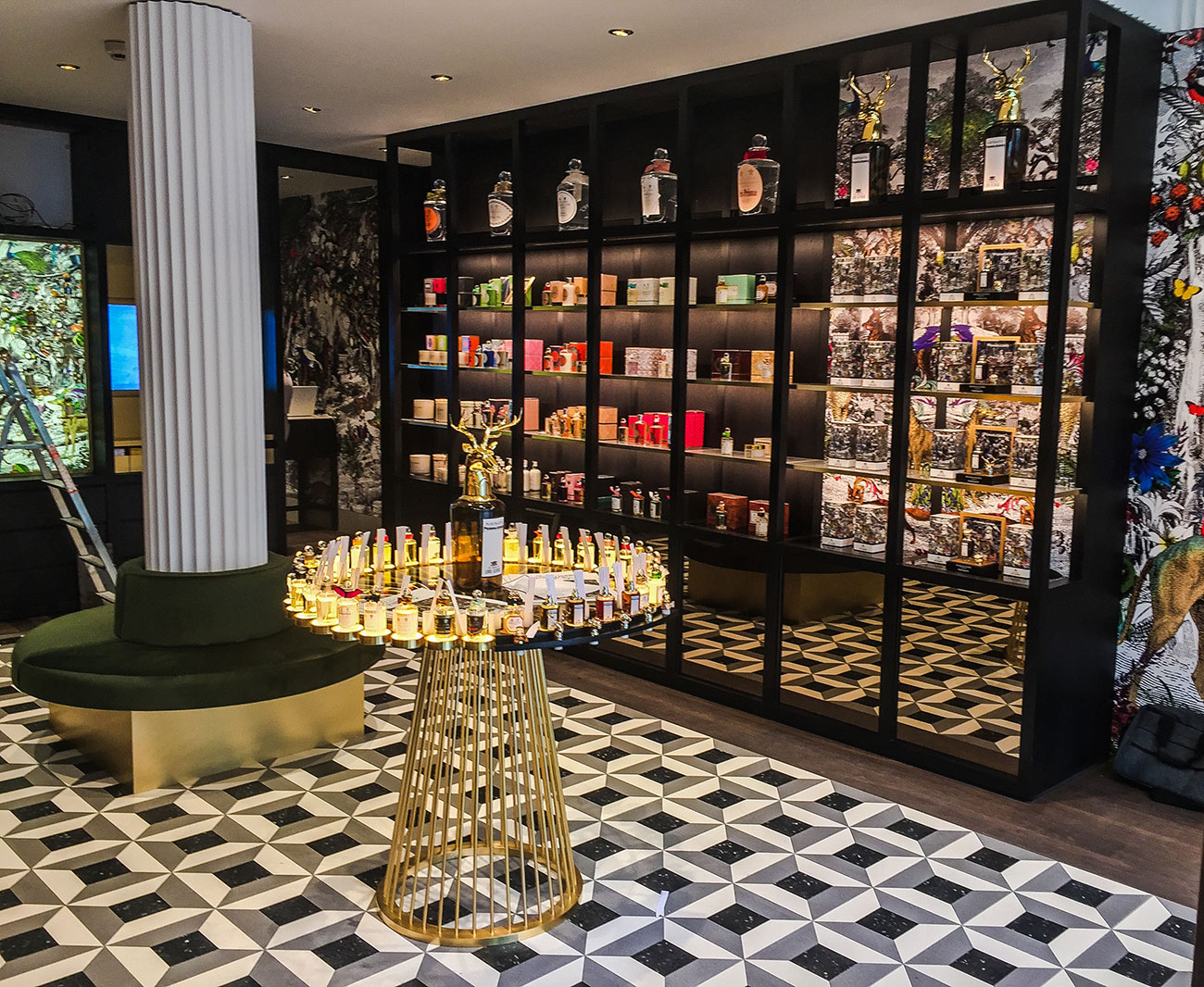 Earlier this week Bob gave a slide presentation locally about our travels through the Windward Islands during the past winter season.  As usual, he was entertaining and humorous and his slides were stunning. 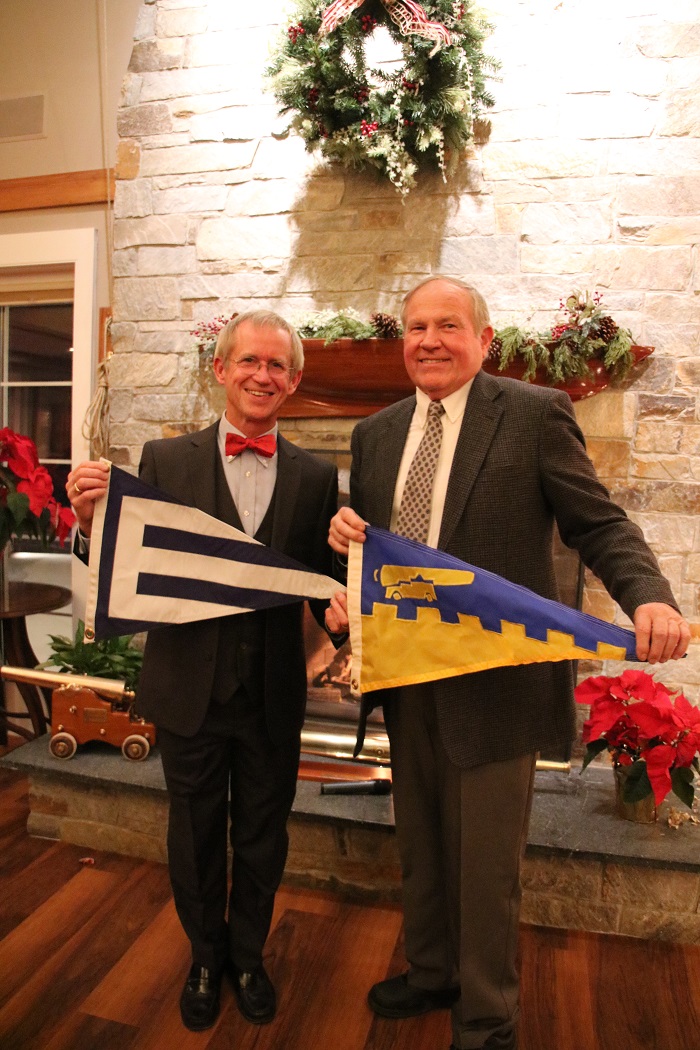 One of the highlights of the evening for me was that a woman approached me to tell me that she’d missed hearing me add to the presentation with whatever handwork I’d discovered on our travels.  I had no idea that any of the sailors in the audience would want to hear about textiles and handwork!

And on that note, it seems I’ve gotten quite far off track on writing about textiles lately.  Perhaps my final thoughts will center on that.  A couple of my gifts this year focused on Idrija lace from Slovenia, which I quite love.  I ordered these little lace hearts from Slovenia.  I should have ordered many more! 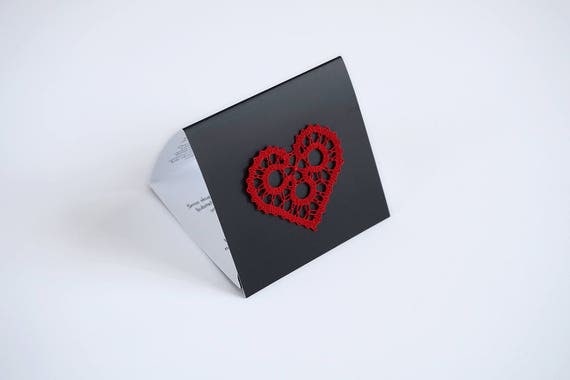 My favorite purchase this year came from the Hartford Artisans’ holiday sale back in late November. It is a short piece of Deflected Double Weave sewn into a cowl.  What a terrific idea to weave cowls in this structure! For one thing, when sewn together with a flat fell seam they are reversible!  Another bonus is that from a warp that would normally be used to make only two scarves, I can probably get six cowls!  Oh!  And a 3rd bonus–no fringes to twist.  I’ve already made my warp, in a much different colorway than this cowl which I bought at the sale.  I’ll be ready to dress my small Baby Wolf to weave some gifts when I return next spring. 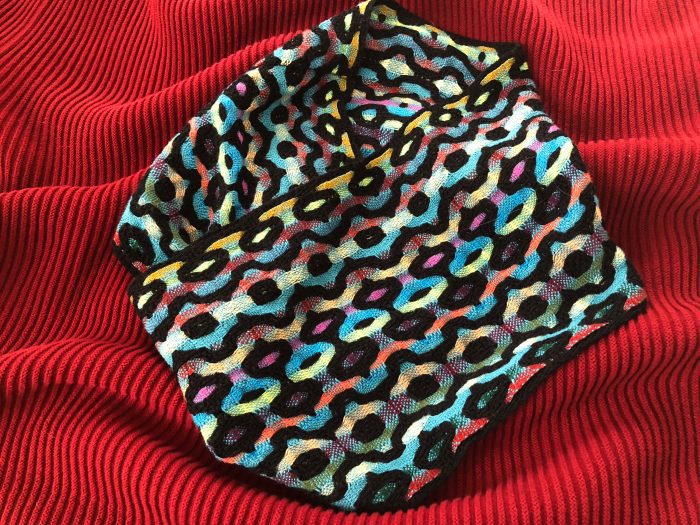 Today marks the halfway point of Hanukah, and it is only 10 days until Christmas.  We’ve had three snowfalls already and some record breaking cold temperatures.  As I write this today I am steeping a large quantity of gin in a mixture of dried hisbiscus flowers, cardamon and peppercorns.  It is my ‘plan B’ from years of searching for damson plums with no luck. I hope hibiscus gin will make a delicious gin and tonic this evening to warm me as I make a batch of cookie and get started on tomorrow’s beef wellington.  I hope you are doing similar things to make your holiday festive and to keep warm.  Best wishes….

This entry was posted in bobbin lace, family, holiday, weaving. Bookmark the permalink.