Right up front I’ll tell you we missed seeing Prince Charles.  Right now it feels like old news, but believe me I still smart a little from this! The Prince arrived hours earlier than predicted, and I was still onboard Pandora, carefully choosing what to wear for a royal visit.  He was gone by the time we got ashore (although we did not know that until hours later!–until others told us all about it).  Some of our friends only saw the royal motorcade while they were out on their morning walk.  Our friends on Exodus were on the dock in English Harbour, due to the many gear failures that occurred during their passage that needed professional attention.  They were having their morning coffee in the cockpit when Prince Charles strolled up to have a chat!  It was then that they all wished they’d taken more care with their morning attire! 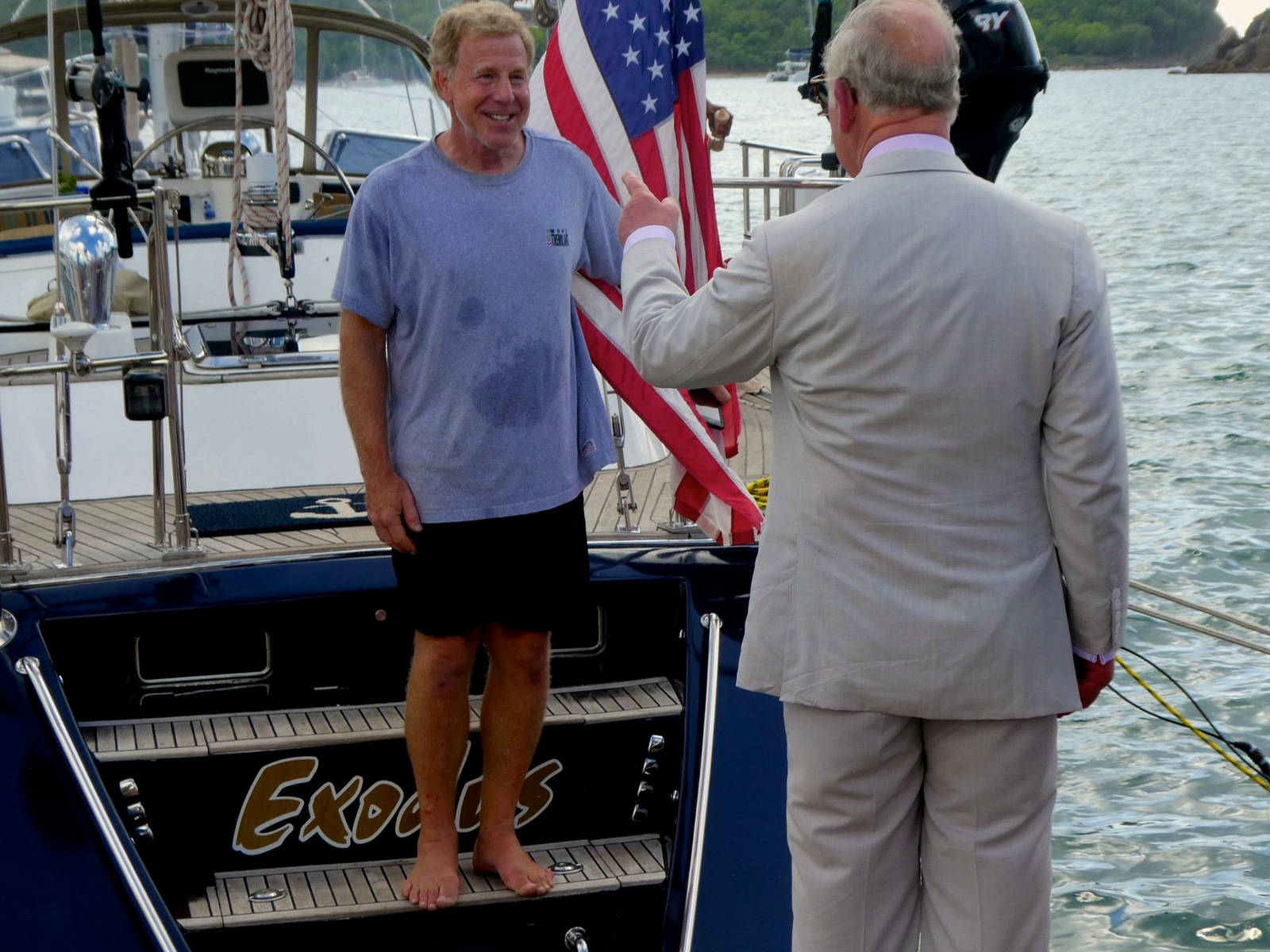 One of our Salty Dawgs, Ardys Richards, took this fabulous photo! 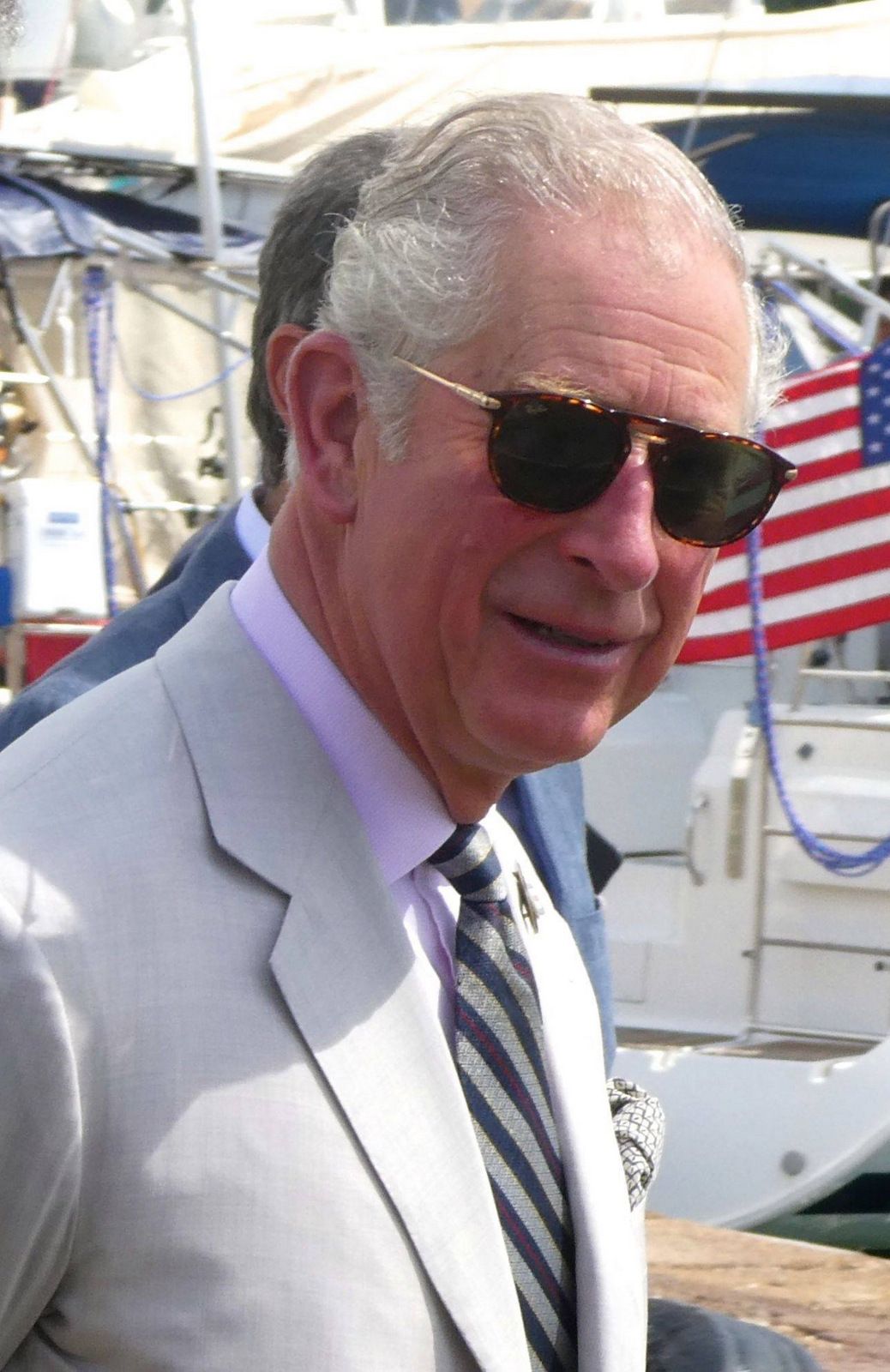 As you can see, not many were on hand when the Prince arrived. 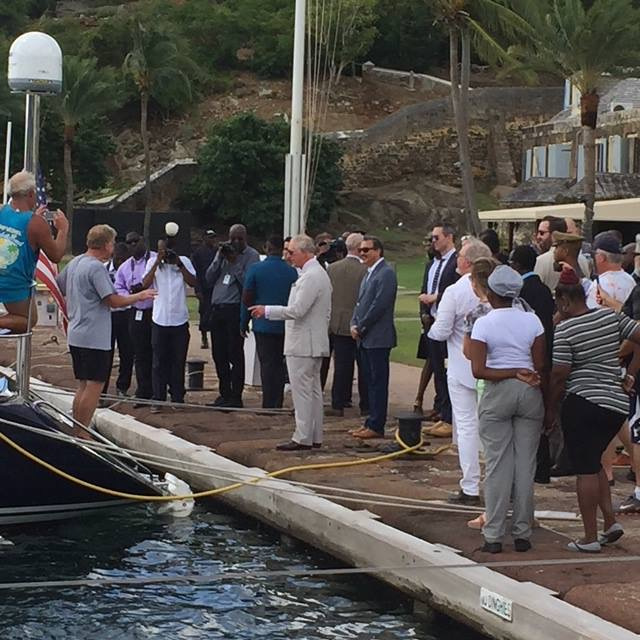 It has taken me awhile to catch up on the all the happenings since we left Antigua.  Thanksgiving seemed to come right after Prince Charles left, and I cannot account for the three days in the middle. I think we were having more of Bob’s planned events–it was a whirlwind!  What an experience to have a traditional Thanksgiving dinner in such a tropical setting, with a significant number of non-Americans sharing the experience with us.  Dinner was served just after sunset, on the deck above the Antigua Yacht Club, where we enjoyed a balmy breeze and beautiful views of the harbor.  The cooks made 10 turkeys for the 100+ diners, and we all tucked into plates full of turkey, stuffing, mashed potatoes, and various roasted veggies….not island fare at all!  (photo also by Ardys, I think!) 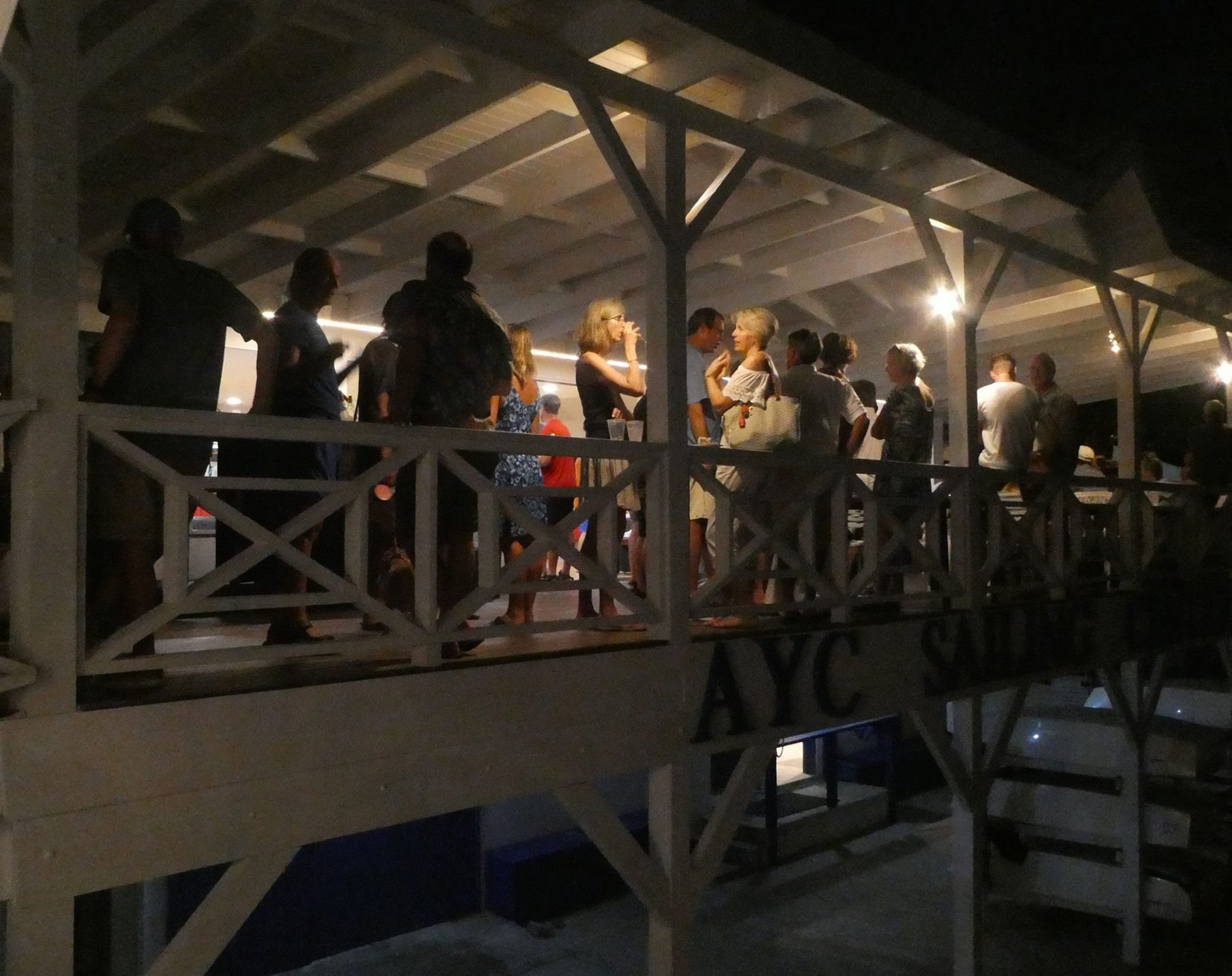 We left on Friday to head back to the States, in particular to our older son’s house to participate in our granddaughter’s christening.  That was quite an adventure–although too boring to write. We didn’t arrive until just before dawn on Saturday morning.  Our younger son arrived on Friday from San Francisco, and we all enjoyed a belated non-traditional Thanksgiving dinner together on Saturday night.  Rob and I have always wanted to make a Beef Wellington together, and at last we did!  It was a special evening to have our whole Osborn family together, that now includes a daughter in law and a granddaughter, along with one of Rob’s oldest friends and his new wife.  I was overflowing with thankfulness!

And then Sunday brought the christening! Of course I think Little Tori would be beautiful in a burlap sack, but I was thrilled to see her wearing the dress I’d spent most of the summer and fall making for her.

Tori’s mom chose the fabric–silk shantung, and it had that mesmerizing rustle of silk as Tori walked around in it.  The sleeves are silk organdy (mostly because they were a bit complicated for me and I could not face the idea of trying to make them in the shantung when it came to inserting them into the tiny armhole!).  As it worked out, I love the sheerness of the organdy that shows off Tori’s tiny, delicate shoulders!  I barely know what I’m doing to make a dress like this–French seams, a lining, petal sleeves,  bound seams on the armholes,  buttonholes.  The credit for this dress really goes to my sewing teacher Marie, who directed every move I made in the construction, and then sewed a few things herself when I could not, such as inserting the 4-piece petal sleeves into the dress and making those buttonholes!

Tori is looking a little shop worn after the long ride to the church and back along with the christening ceremony!  She was happy to get back to bare feet! 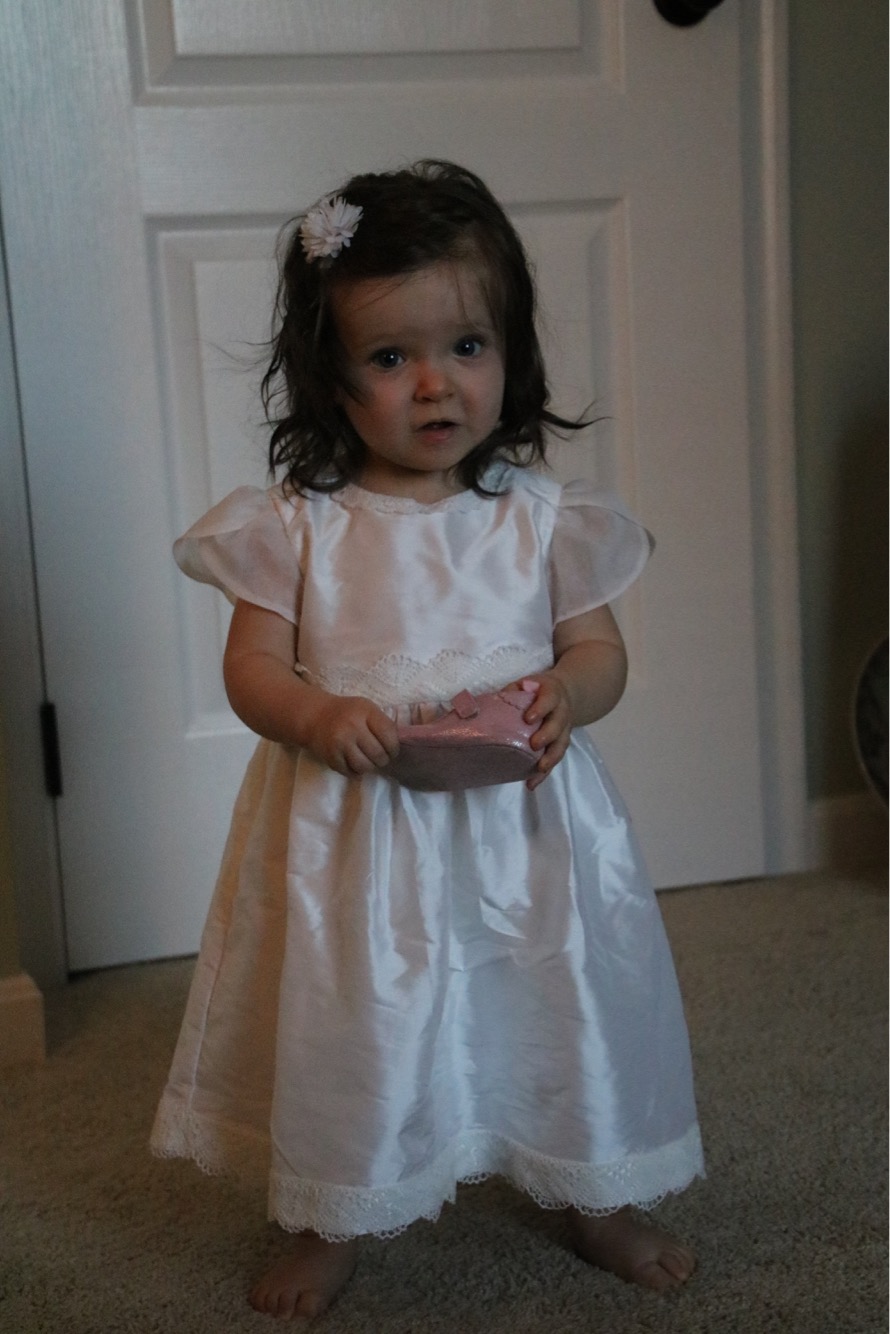 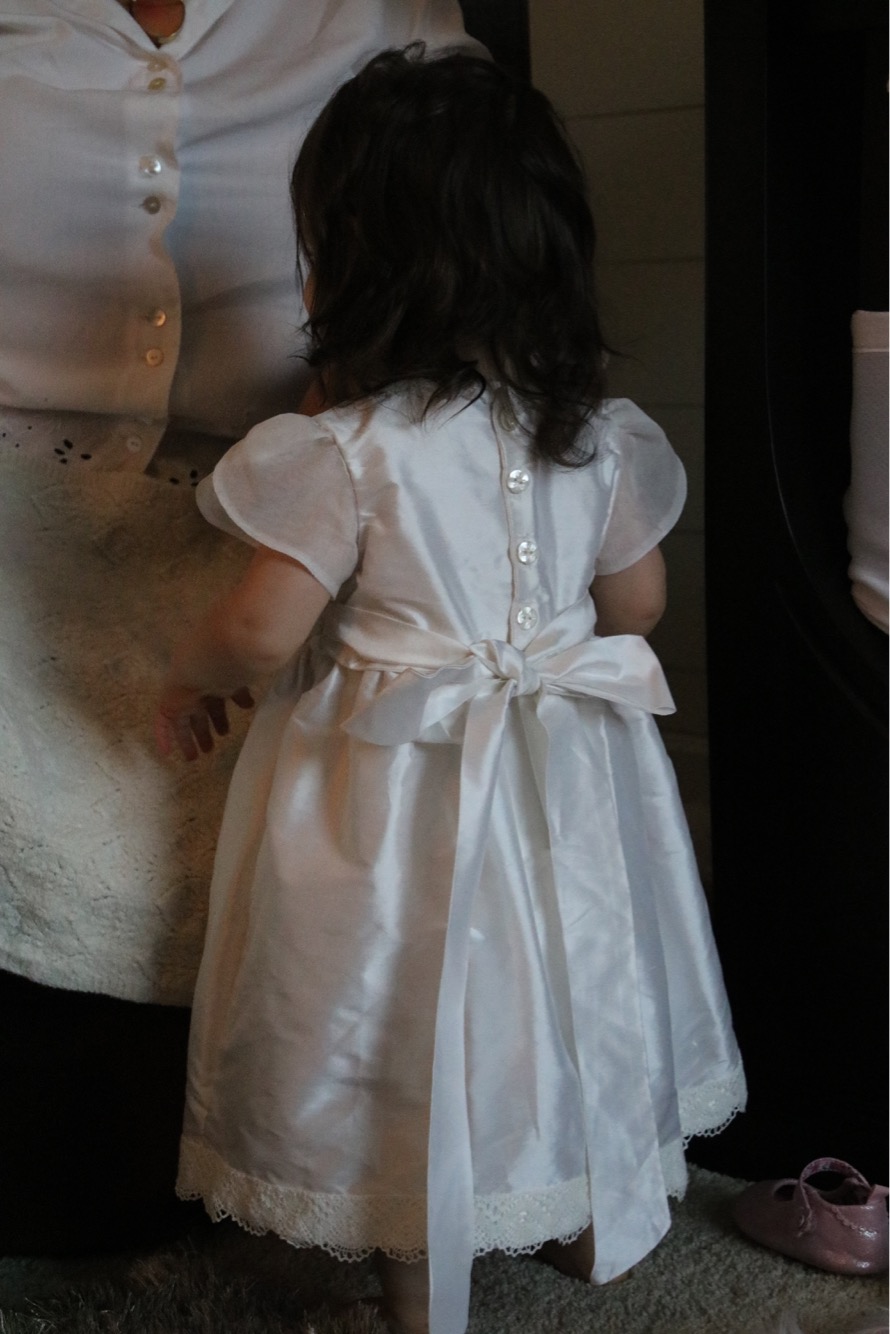 I had to make the dress in spite of my sewing INexpertise because I wanted to use the lace I’d been making for the 5 month months leading up to the big day.  I spent somewhere in the neighborhood of 100 hours making the two yards of lace border for the bodice and hem of the dress.  There is a smaller lace at the neckline that I had saved from an earlier project (members of Metro IOLI will recognize it as Gunvor Jorgenson’s workbook, lace #3).   Making this dress meant the world to me!  I was thrilled to see my little princess in it and I was glad that she wore it all day!

Christopher documented the whole day in photos for us….just about the best gift we could imagine!  He took 600 photos!  I’ll just share a few….though it will be more than I usually post…. what can I say?  I am smitten with Tori and with Chris’ photos of her!

Here she is with her dad, walking along the altar at the church. 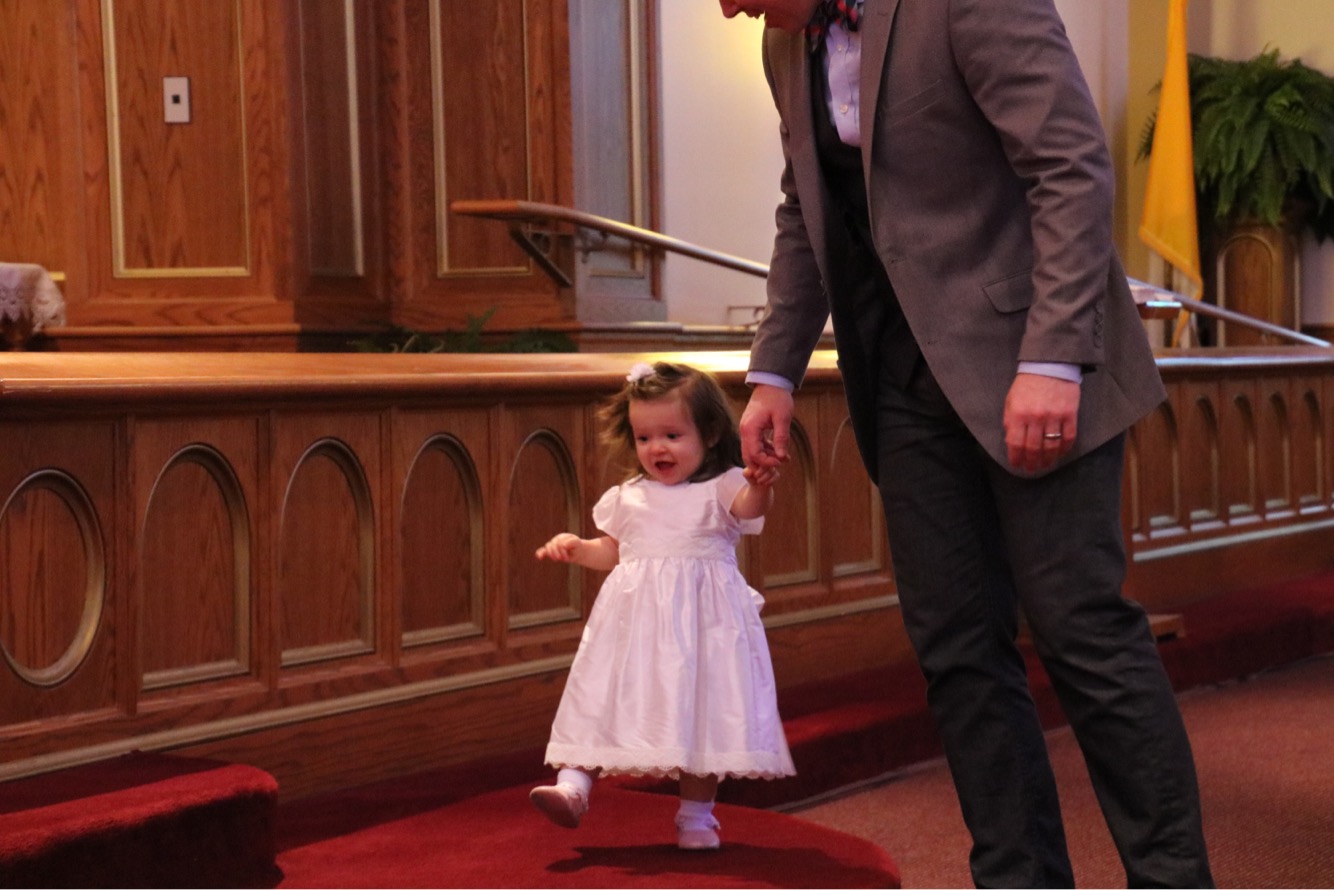 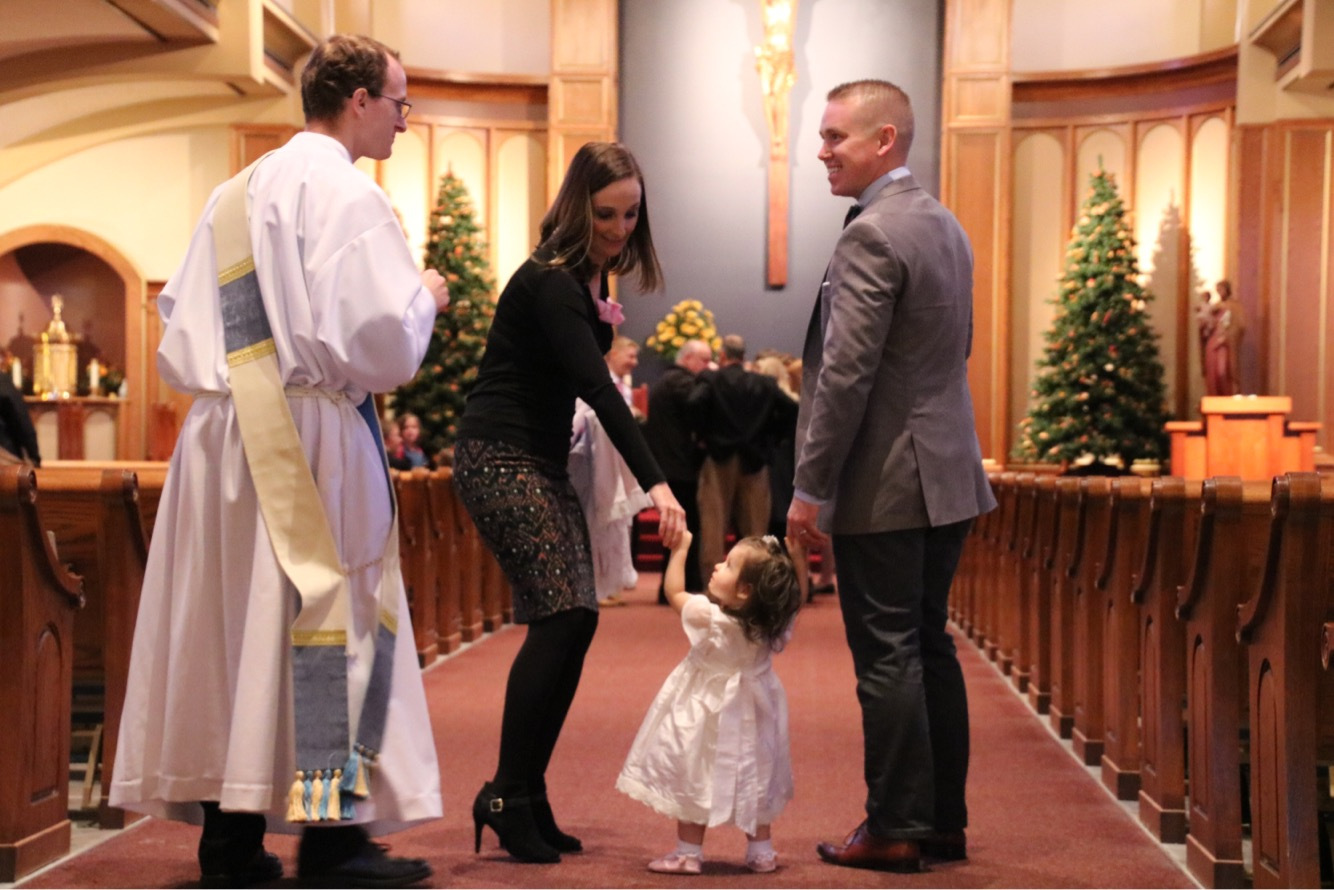 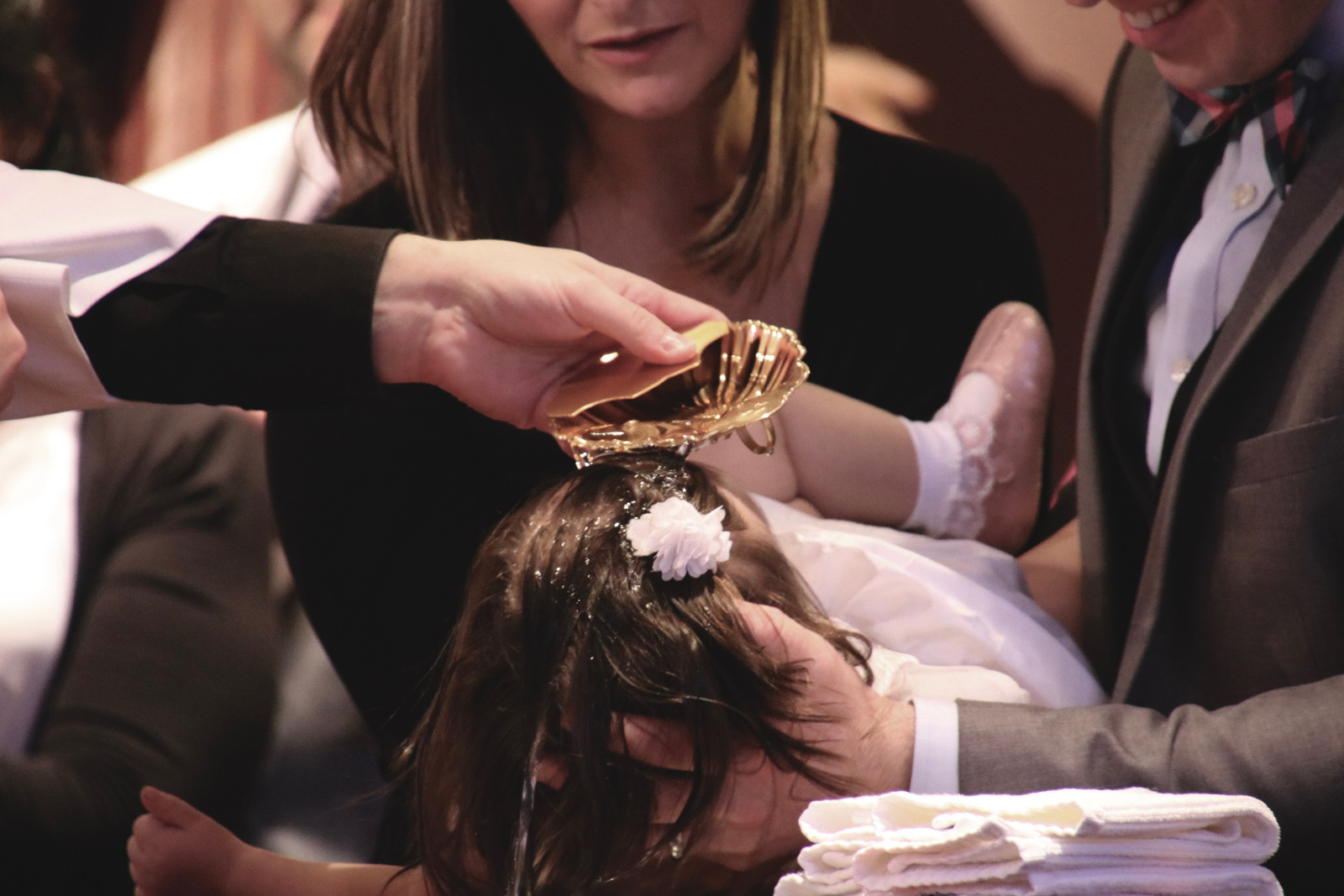 Aftereward, posing with Mom and Dad in front of the Christmas tree on the altar. 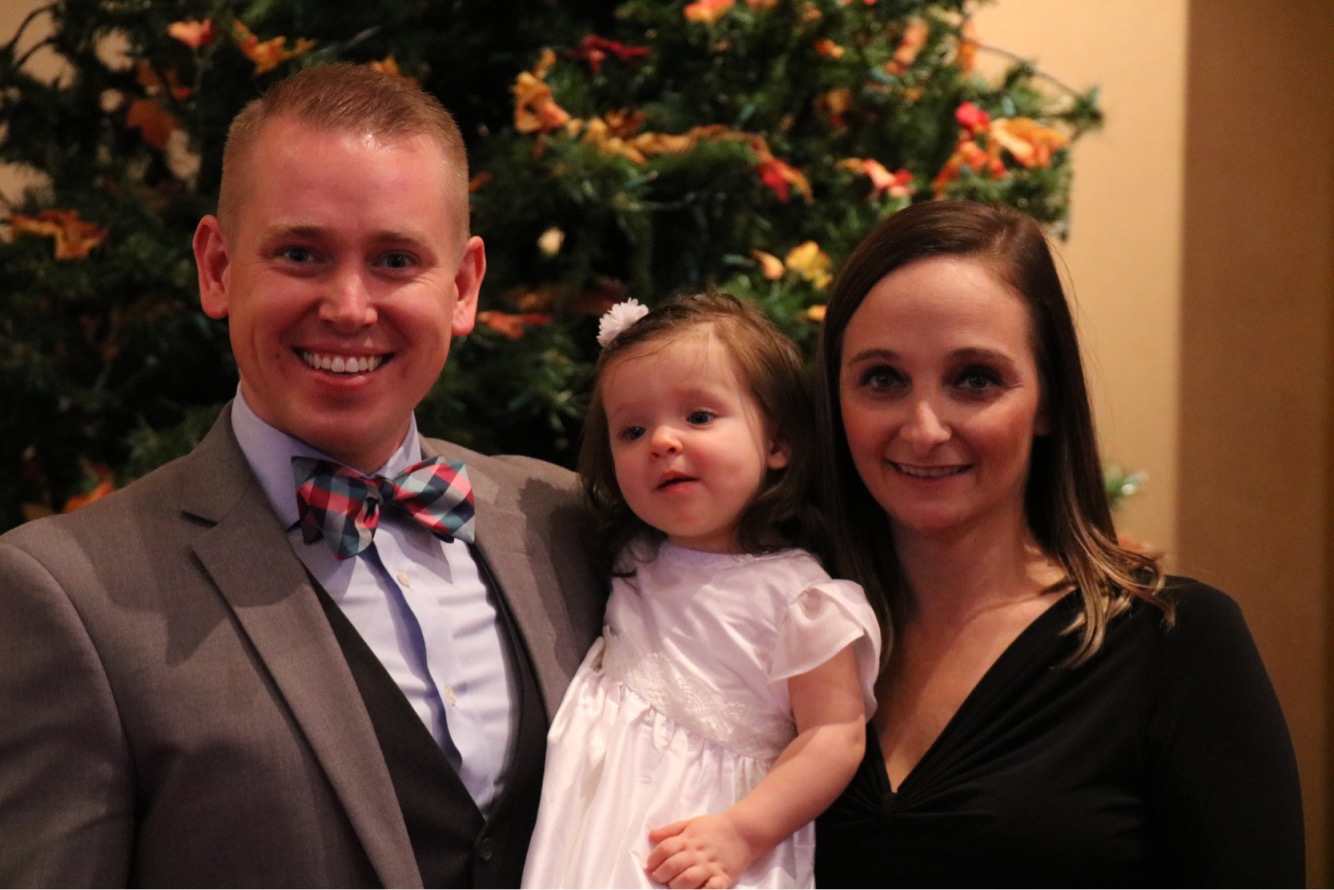 The party at home afterward included good friends and both families for a late lunch and play time with Tori.  I don’t think she took a nap that day…. she held up well, like a royal would do! 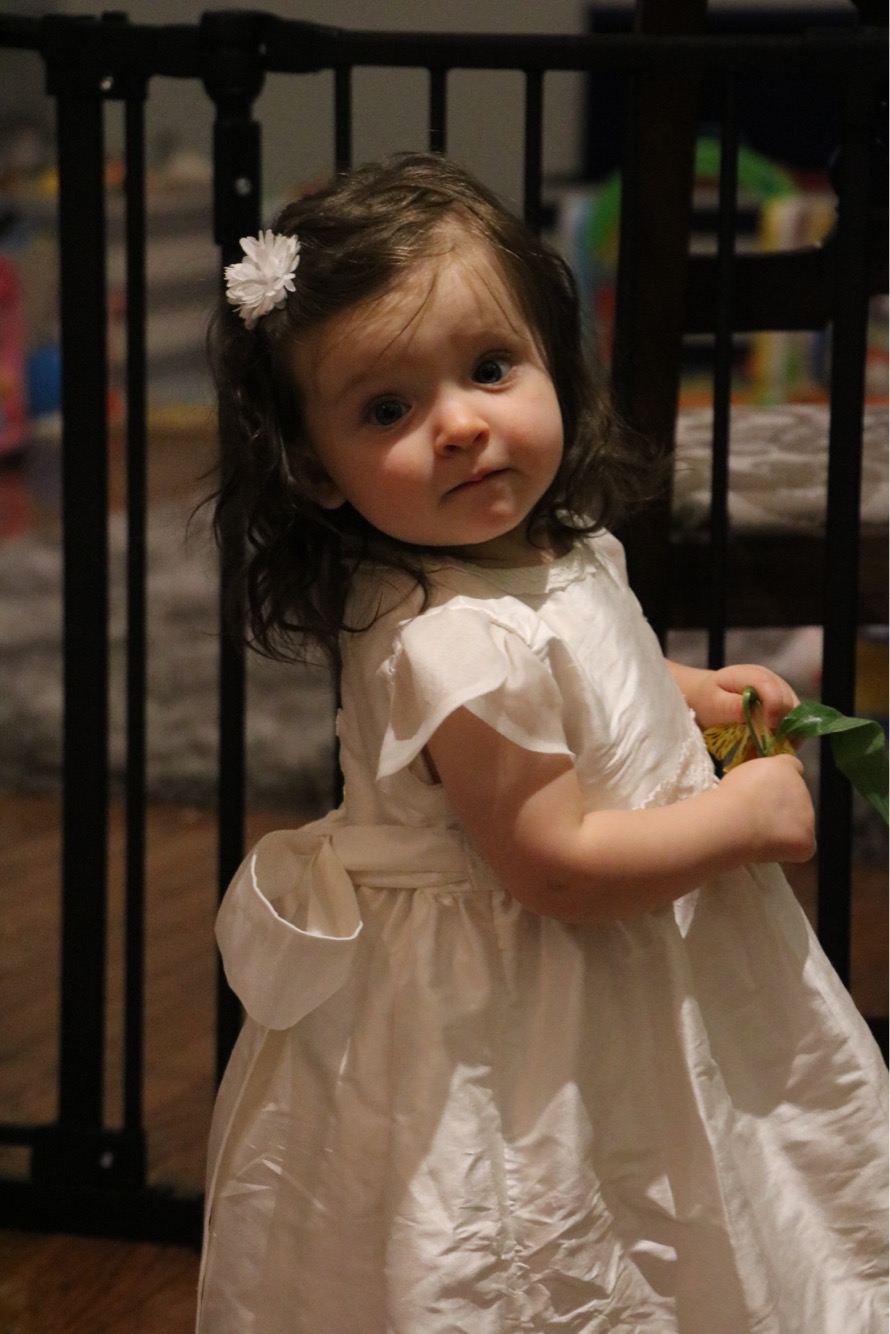 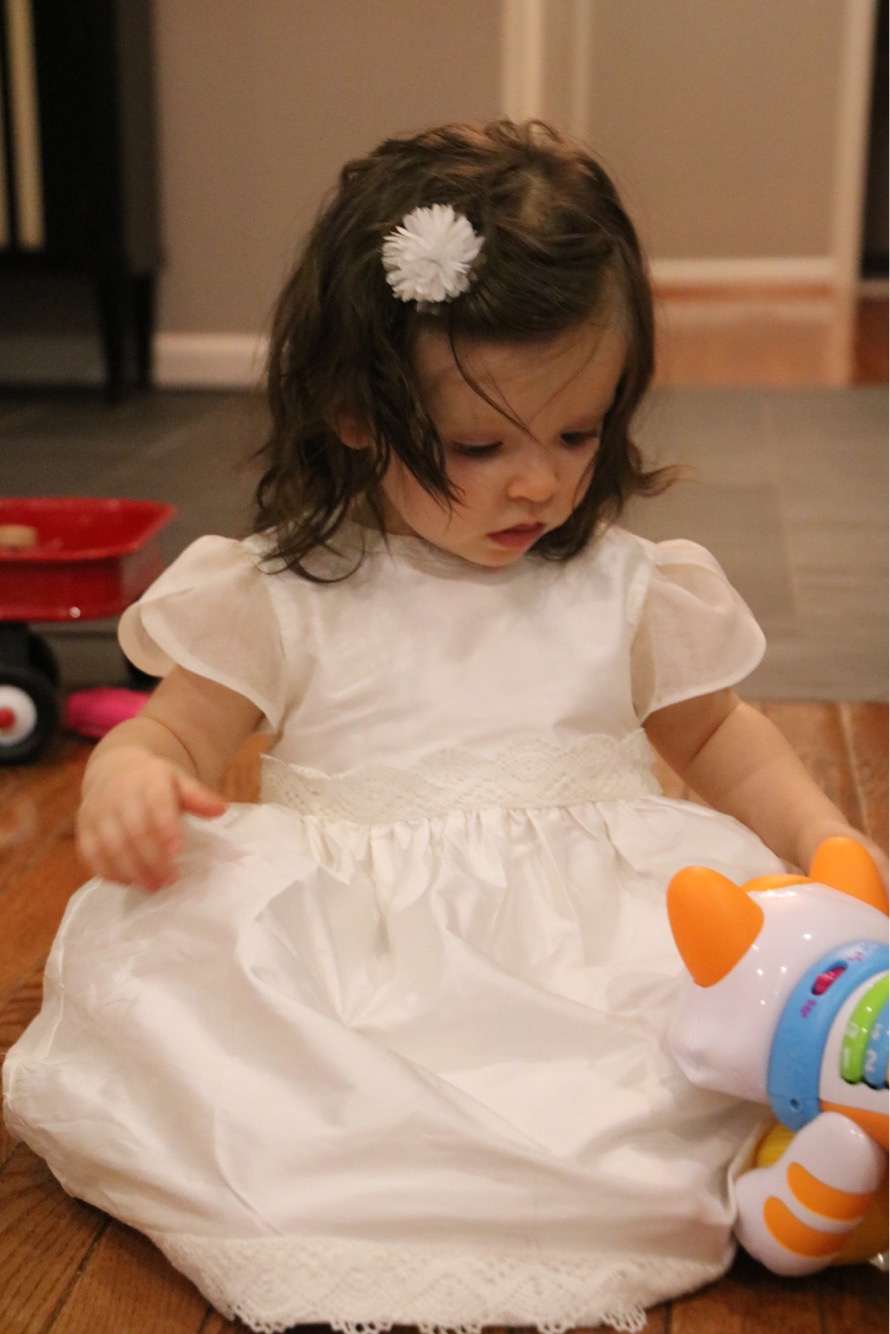 Our little Tori is as royal to us as Prince Charles.  She is certainly the little sovereign in our family, and we all do our best to serve her needs!   She our tiny super moon (still), and we are all caught up in her orbit. In fact, December’s full moon is occurring now, the same full moon (actually a ‘super moon’ like the one that occurred last year when  she was born!) In lunar cycles, she has turned one on this full moon!  Her calendar birthday will be in 10 days, after this moon cycle has finished. It’s a wonderful place to be–in her orbit….I’m enjoying every moment of it!

This entry was posted in bobbin lace, family, holiday. Bookmark the permalink.