Antigua to Guadeloupe, from English Charm to French Shabby Chic

We left Antigua more than a week ago, and I have not had internet until now.  Bob has had better luck than with that than I have.  Isn’t that weird??  He’ll be sitting next to me able to get email and write a blog post while my computer will not connect.  The mysteries of cyberspace…. especially the mystery that his ancient clunker of a PC works so much better than my moderately middle ages Macbook.  Hmmm…

Guadeloupe is the most beautiful island I have ever seen!  Some of our cruising friends have told me that Antigua is the beginning of the ‘real’ Caribbean, and that every island gets more and more beautiful as you head south.  I really cannot imagine that.  We spent almost a week in the small harbor of Deshaies (pronounced DAY ‘Eh–reminds me of a certain Caribbean song made famous by Harry Belafonte…how about you?) on the northwestern coast of Guadeloupe, and I was thoroughly enamored of the charming seaside village.  As we sailed in the mountains rose up all around us and a tiny bit of shoreline was dotted with colorful buildings, all with red roofs.  The scene was dominated by a white tower with a red roof that rose above all the other buildings.  No surprise that it is the Catholic church for the village.  We had arrived back in the land of baguettes and wonderful vegetables!

But before I talk about Guadeloupe, I should finish up with our last days in Antigua.  We rented a car to take Chris to the airport, so after we said our tearful goodbyes (for my part certainly), we took the rest of the day to explore parts of the island we could not get to on foot.

Betty’s Hope is a well known tourist attraction.  At some point in Antigua’s past there were about 600 stone windmills on the island, used to power the processing of sugar cane into sugar.  All these windmills were built by the hard labor of slaves and oxen.  There are still about a hundred windmills in various stages of decay on the island, but two at Betty’s Hope are beautiful examples. One has been restored to working order and is used to demonstrate grinding the cane on certain occasions.  While we were not there on one of those occasions, it was still very impressive to see the windmills.  Just to move the arms to face into the wind requires a lot of manpower and oxen power. 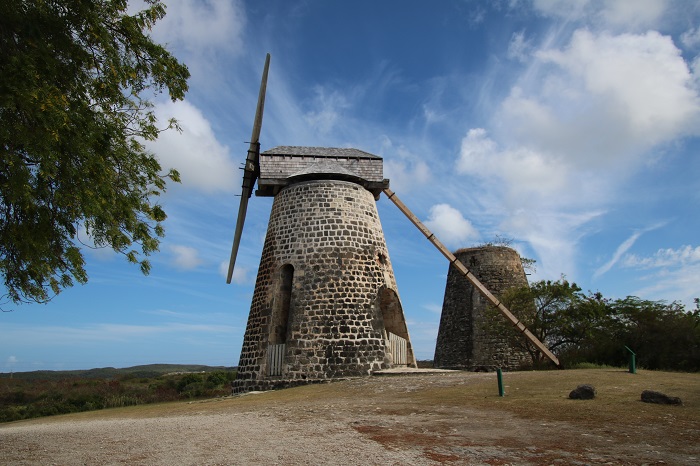 Betty’s Hope was named for the daughter of the landowner.  I was disappointed to learn this.  I had hoped that the name was in honor of a slave woman, possibly the wife, mother, aunt, grandmother of several of the men who had built these windmills.  Well, so much for my romantic notions about the history of this place.  What on earth was this Betty hoping for?  A big sugar yield to make her family wealthier than they already were?  I can imagine so many more interesting hopes for a Betty who lived and worked the land with her family than for the real Betty.  Still, I bet there is some pretty interesting history here.  I would know more if we had internet! 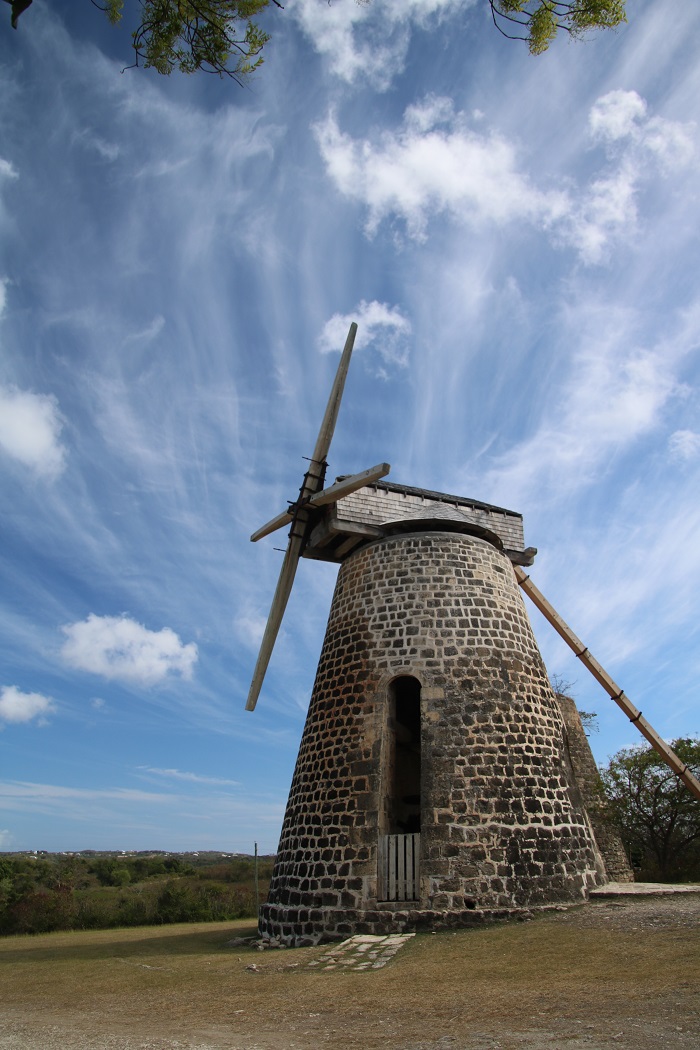 Betty’s hope is now home to a large herd of goats, which Bob and I enjoyed most of all!  There were lots of kids frolicking, even some newborns.  Baby goats are about as cute as babies get! Our new baby granddaughter, Tori, would have enjoyed them too! 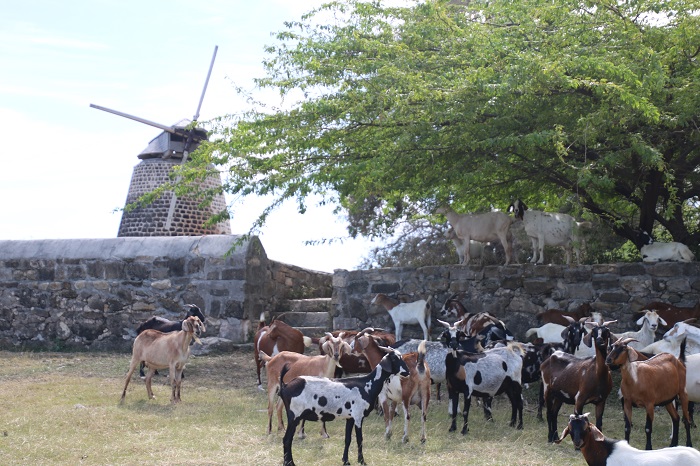 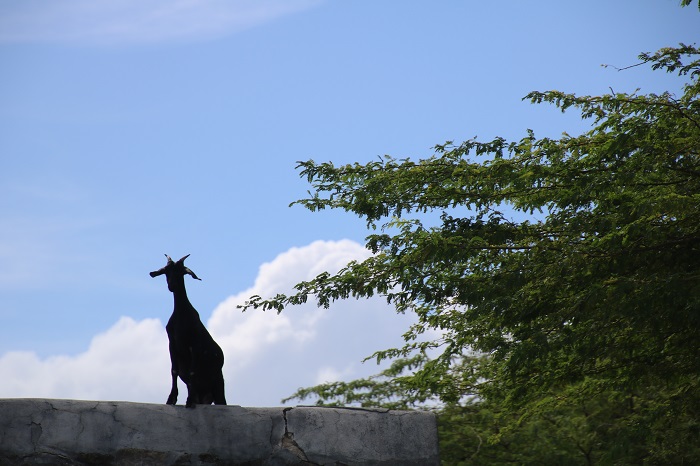 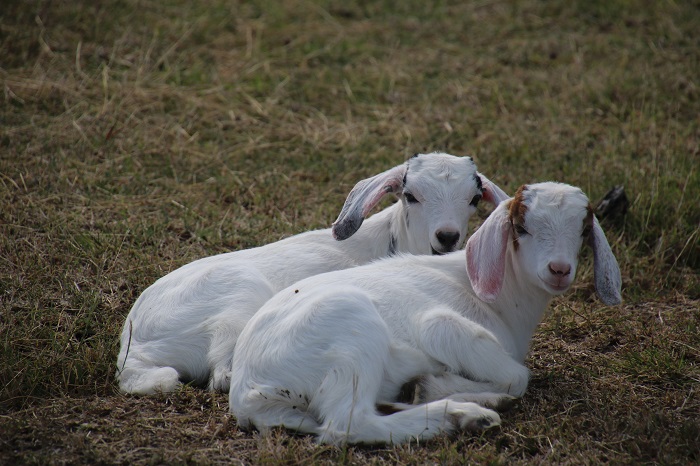 We have been so entertained by all the goats on Antigua.  There is large solar farm in the middle of the island where we saw goats eating the weeds around the panels.  This is their day job. Late in the afternoon the goats somehow know it’s time to go home.  They head out with no shepherd to guide them.  They know the way.

Bob and Chris encountered this mother and kid heading home after a day out.  Bob said the kid whined the whole time he and Chris were behind them.  Makes you wonder if kids complain about the long trip home, or the heat of the day, or even the two creepy humans following them, just like our kids might. The goat mother bore it without comment. 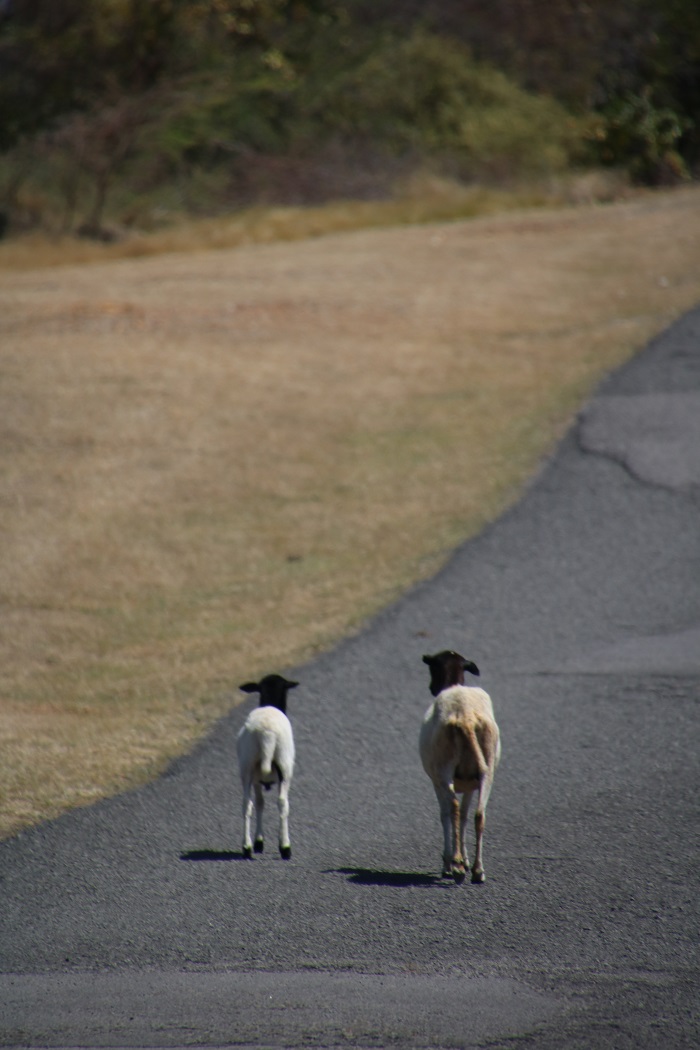 And speaking of kids, here is a scene from our last full day with Christopher before he headed back to his new home in San Francisco.  We took a cab up to Shirley Heights, right outside of English Harbour.  It’s a great place to watch the sunset, and every Sunday hundreds of people show up to do just that. 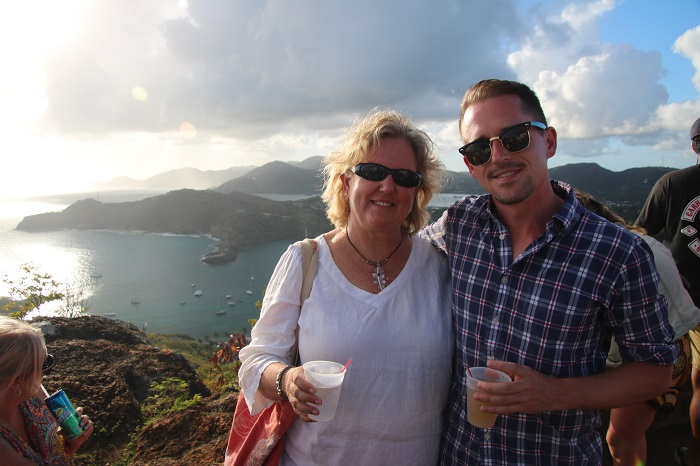 With a view like this, you can see how popular it would be– 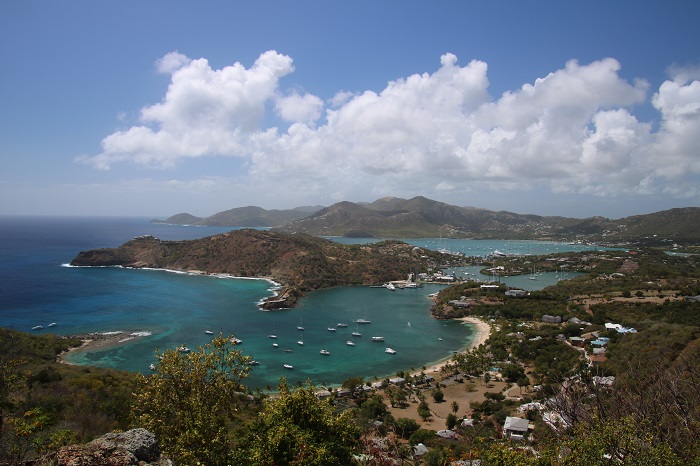 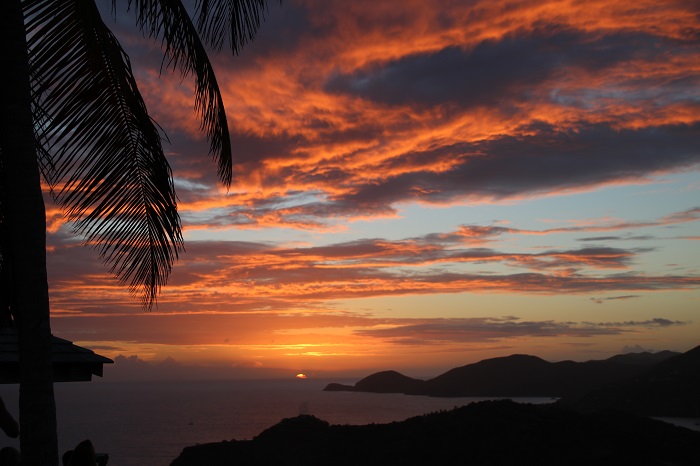 Back to the day that Chris left– at the end of the day we drove out to the northeastern corner of the island to see something called “Devil’s Bridge.”  I had no idea what this might be, and so I was pretty awestruck to see this natural wonder.  It doesn’t look like it will last much longer, but that’s just conjecture on my part. Maybe it’s been in this almost crumbled state for a century already.  I know that people walk across this bridge, but I certainly wasn’t going to try it.  Bob didn’t either!

When we returned our rental car to a parking lot in Falmouth just around sunset, and I was feeling a bit sorry for myself to return to Pandora sans Christopher, we found that the local liquor store was having a tasting of French wines hosted by a French importer who lives on St. Martin.  It was a very nice distraction to an evening I was dreading!  All in all a wonderful last day on Antigua.

The next day we sailed about 50 miles to the pretty harbor of Deshaies on Guadeloupe.  Here is a bit of what we do when we have a long day at sea.  Bob fishes!  This time I was quite lucky that he caught a small tuna!  It’s no fun at all when he catches a king mackerel, and hardly fun when he catches a giant mahi mahi because we have to deal with a very large fish on a rather small boat!  This tuna was perfect for our appetites and our size boat! 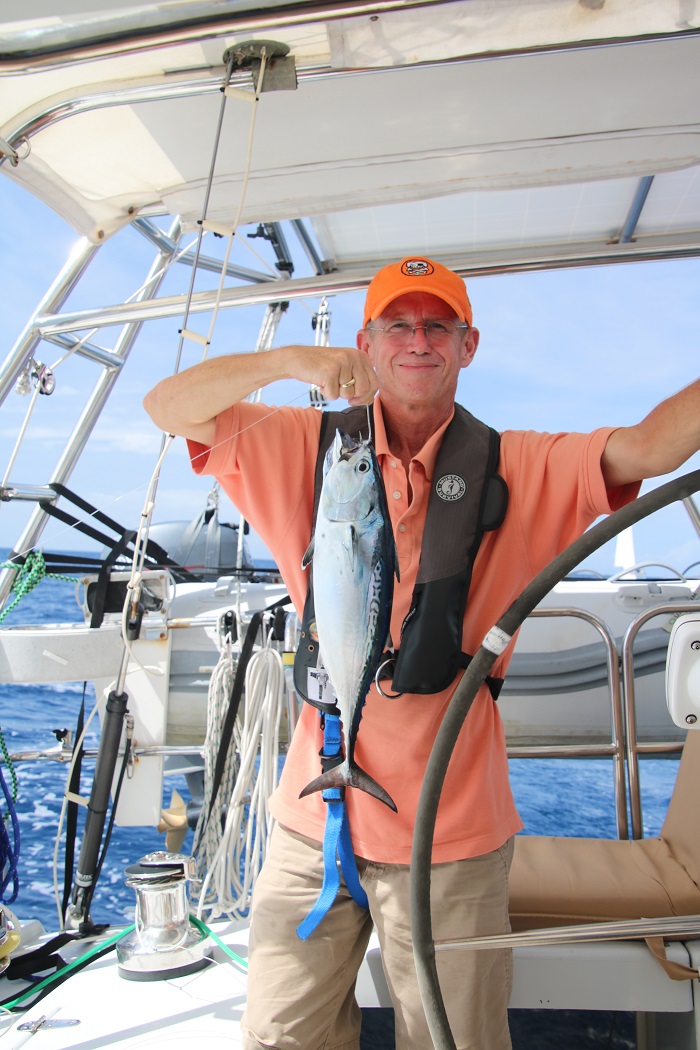 I worked on my orange linen sweater while we were underway, which sometimes includes winding a ball of yarn (Shibui linen) on the steering wheel. 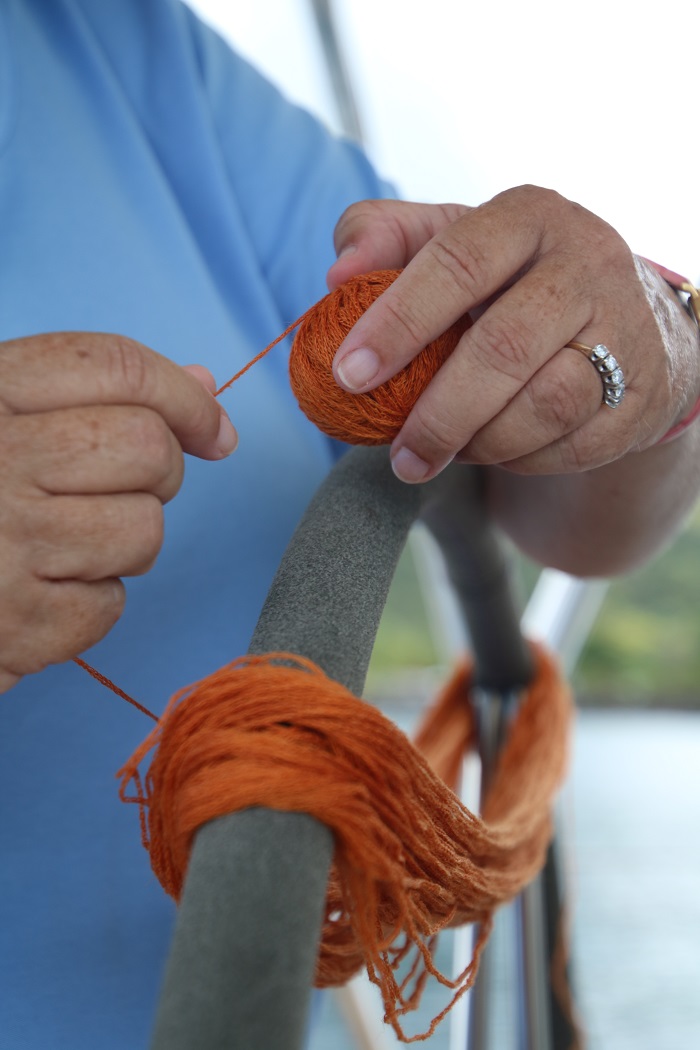 At mid-afternoon we arrived in Deshaies.  It was wonderful to be back in the land of French food.  There are plenty of tourists here, but also a big fleet of local fisherman.  The next morning we were given a first hand view of fishing with a purse seine right behind Pandora.

First the men dropped the net in a wide circle between Pandora and the boat behind us.  One of the crew jumped overboard wearing his shorts and t-shirt and snorkeling gear.  Perhaps he was checking on how the net was laying before the rest of the crew began drawing in the purse. 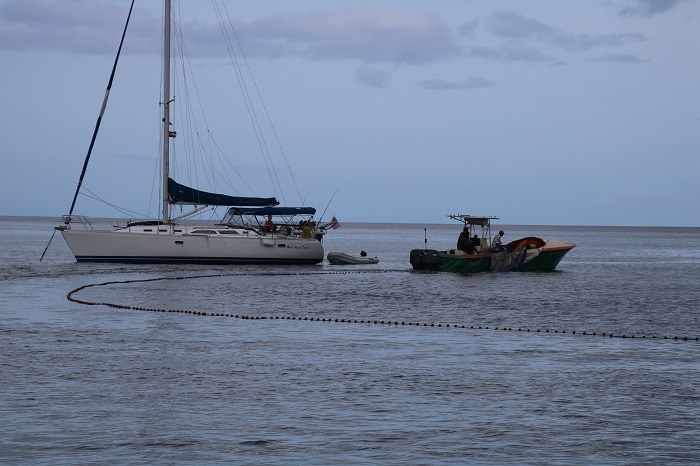 As the crew began to draw in the circle of net at the water’s surface, the diver stayed at the opening.  We are guessing that by being there, he discourages any fish from trying to escape at the opening of the net. 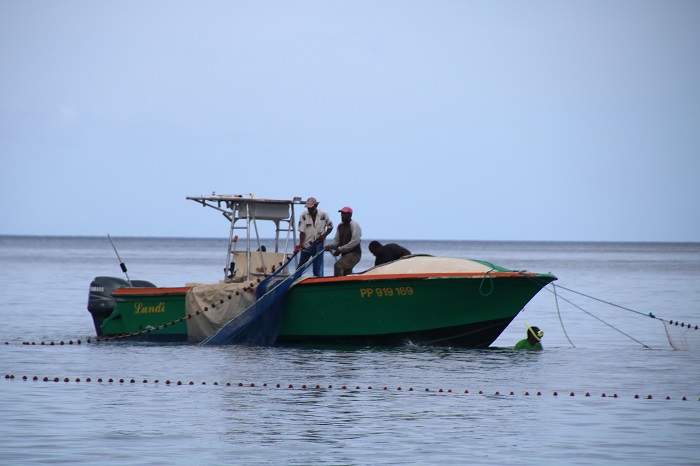 The crew began drawing in both the perimeter of the net on the surface as well as the purse at the bottom to trap the fish.  As the net closed more I could tell that this was very hard work. In fact, once both the top and bottom of the net was closed, the diver got back on board to help pull it in. 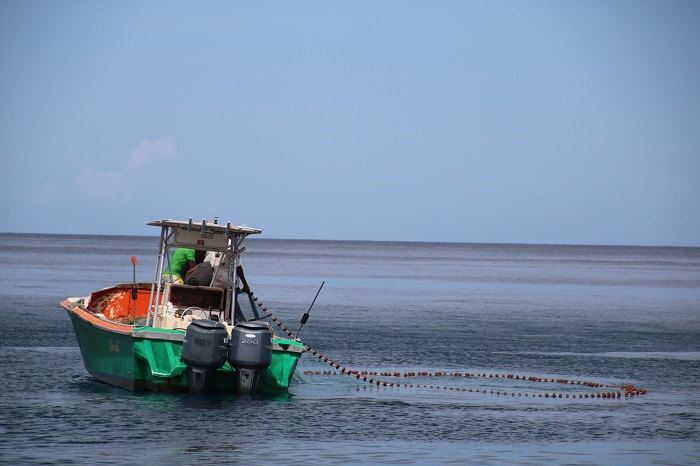 There is a pelican inside the net, helping himself to a bit of the catch. 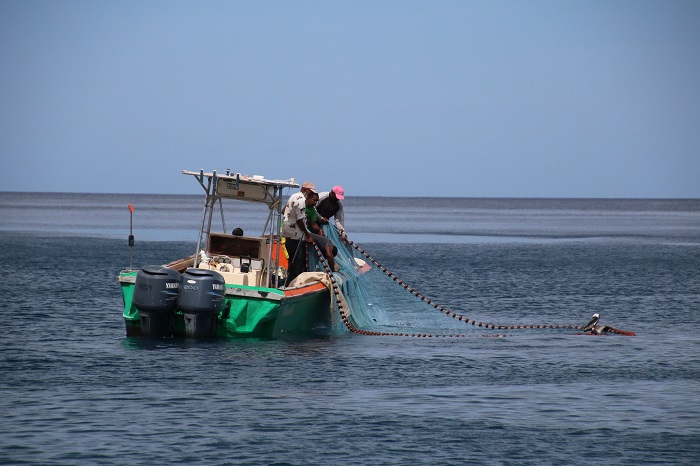 It was a good catch! My friend Maureen (Kalunamoo) told me that these fish get fried in strips and served like French fries.  I have not seen this yet in any restaurants. But, when we were ashore yesterday, we came back to our dinghy to find several pelicans diving right around the dinghy dock and three dead fish in our dinghy, just like the fish in the net.  There must have been a school of them being chased by larger fish and some jumped right into our dingy to escape certain death from the big fish– only to find themselves stuck in our dinghy.  Out of the fire and into the frying pan, as the saying goes…. 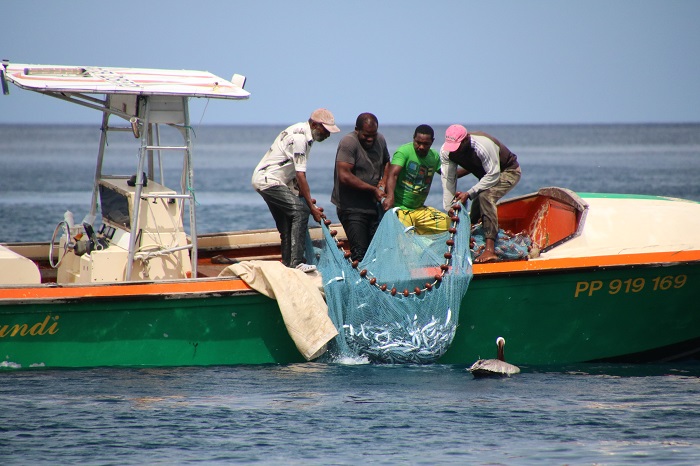 Experienced cruisers in this area, including Bill and Maureen from Kalunamoo, have told us that once you get to Antigua the islands just get more and more beautiful as you head south.  It’s hard for me to imagine this!  Both Antigua and Guadeloupe are so charming and scenic and dramatic with their ancient volcanic mountains–how can it get better?  I guess I will have to wait and see.

This entry was posted in knitting, sailing, travel, yarn. Bookmark the permalink.