Regret is an emotion I try not to nurture, but I almost named this post ‘regret’ — I’m fighting the urge to give into it.  I got the shocking news last night that one of my local area weaving friends died…. unexpectedly to me.  I did not even know she was sick.

Some of you know that I am a relative newcomer to this area, so I haven’t known the local weavers here for very long.  Some of them have been so generous in including me in local events and welcoming me into their magical circle of friendship.  Kathi has been that kind of friend to me.  In the small amount of time I have lived here, only four short partial years, Kathi has been a good friend, and I have seen first hand what a marvelous weaver she was. 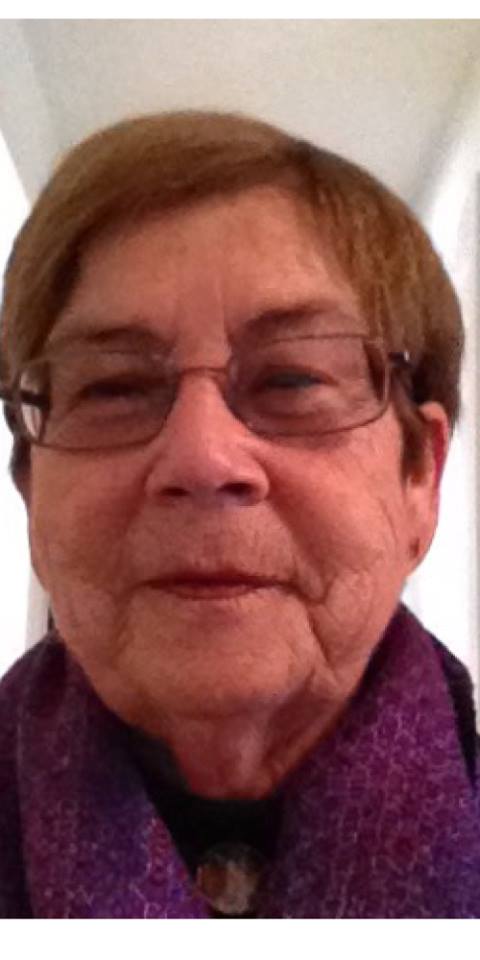 When Convergence was in Rhode Island, in 2014, she was in charge of setting up an exhibit that would greet visitors who entered one of the sites off the conference grounds.  It was the entrance to a building downtown Providence that, I believe, is part of URI.  The exhibit on display within the building was ATA’s small format tapestries, and all the windows at the entrance to this building were filled with various kinds of weaving done by Rhode Island guild members.  It was a visual feast and it let you know immediately that you had arrived at the right location.  It was a grassroots effort to get more weaving in public spaces, and it was beautiful.

One day last fall Kathi invited me to meet her in Rhode Island, where she lived.  We met for lunch and then she took me on tour of URI’s textile department at the Kingstown campus.  First she showed me the exhibit on display in the gallery, called “These are a Few of My Favorite Things,” which was a lavish collection of pieces chosen by the staff and the curator, Margaret Ordonez.

I hope Kathi realized how much I loved this entire experience.  The exhibit included so many amazing textiles from the past several centuries that included handwork from many cultures.  We met Norma Smayda there who was visiting with a few of her students.  When Kathi introduced to me Ms. Ordonez, we were treated to a tour of some of the textiles currently being restored by students and also took a look at some of the classrooms.  Boy, if I could do it again, I’d be a textile student at URI!

Kathi did a lot of work for the Connecticut state guild, and this is something I can barely record since she was involved long before I ever moved here.  While I have lived here she was the head of a committee to grant scholarships for weavers to attend various conferences around the country.

Last fall our local group had a long weekend workshop with Sarah Fortin.  We all brought handwoven yardage that we then assembled into jackets based on patterns that Sarah had developed over the years.  Kathi’s jacket was one of the most interesting.  She had woven a variety of twills on one warp using neutral creams, greys and blues.  Because she had changed her treadling throughout the yardage, she had quite an interesting mix of pieces to go into her jacket.  I kept hoping I’d see her wear it one day.  I never saw it finished. 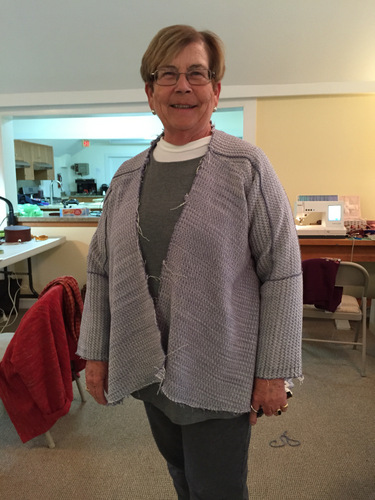 My local weaving group remembers Kathi for her easy going attitude and terrific sense of humor toward trying new techniques.  I was lucky to take two workshops led by Kathi where we made what she termed “Surprise Scaves.”  For these workshops Kathi brought a rainbow of ProChem MX dyes in little squirt bottles, a large pot black acid dye, and a pot of dye discharge.

The process she taught was folding silk chameuse scarves (dry!) in shibori style manner, and binding the folds with rubber bands.  We then used the squirt bottles to apply color to our folded scarves. We set the color on our dry scarves with vinegar from another squirt bottle  After that we put our folded scarves in the hot black acid pot.  Then we took off the rubber bands and readjusted them in a random way and dunked our scarves in the exhaust bath.  After removing and cooling a bit we undid our little bundles and everyone had a stunning scarf!  It was completely unpredictable and yet also magical!  I participated twice in this workshop, but but the time I joined this group this was already a popular workshop, so the group does it almost every summer.  In fact, we plan to do one in the near future in remembrance of Kathi. 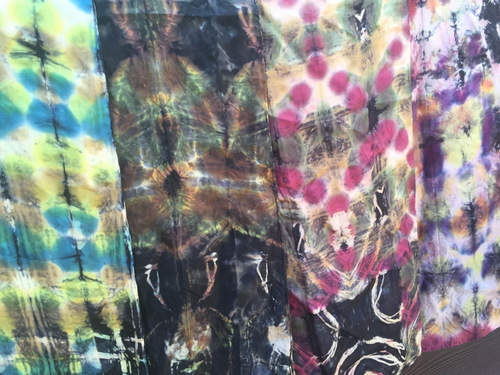 I know that Kathi was very active in both guilds in Rhode Island and Connecticut, so many of those members have far more memories of her than I do.  I regret that I will not get to know Kathi  longer.  She was one of my favorite friends, however new our friendship was, and she was also one of the most creative and experienced weavers I have known.  I am trying to focus on how lucky I am to have gotten to know her, however briefly.  Her funeral is Friday, and I intend to wear a surprise scarf to the service.