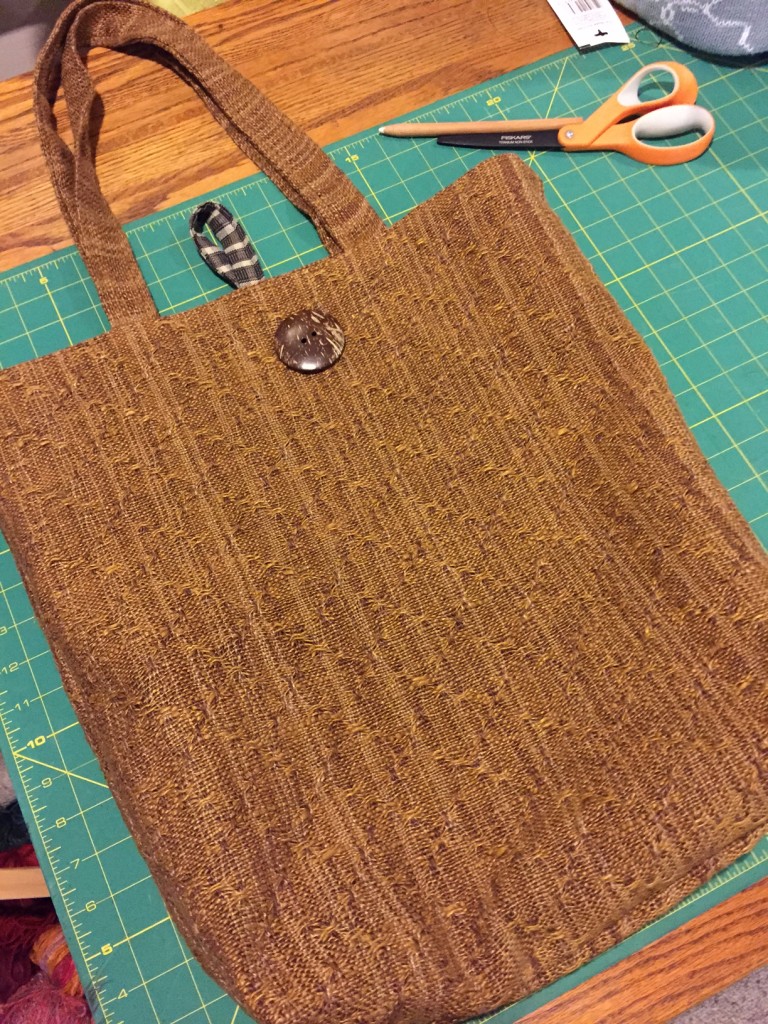 The draft for this pattern is from a workshop Laurie Autio gave our guild in fall of 2014, called “Designing for Block Weaves Using Twills as Profiles.”  In the post I wrote I about this I called it a ‘blended draft’ which Laurie says it is NOT!  So I’m not certain what to call the procedure of taking a twill circle (1-2, 2-3, 3-4, 4-5…etc) and using that sequence as a profile draft for plugging in a different weave structure, such as huck.

Here is the plaited twill draft that was used for the profile: 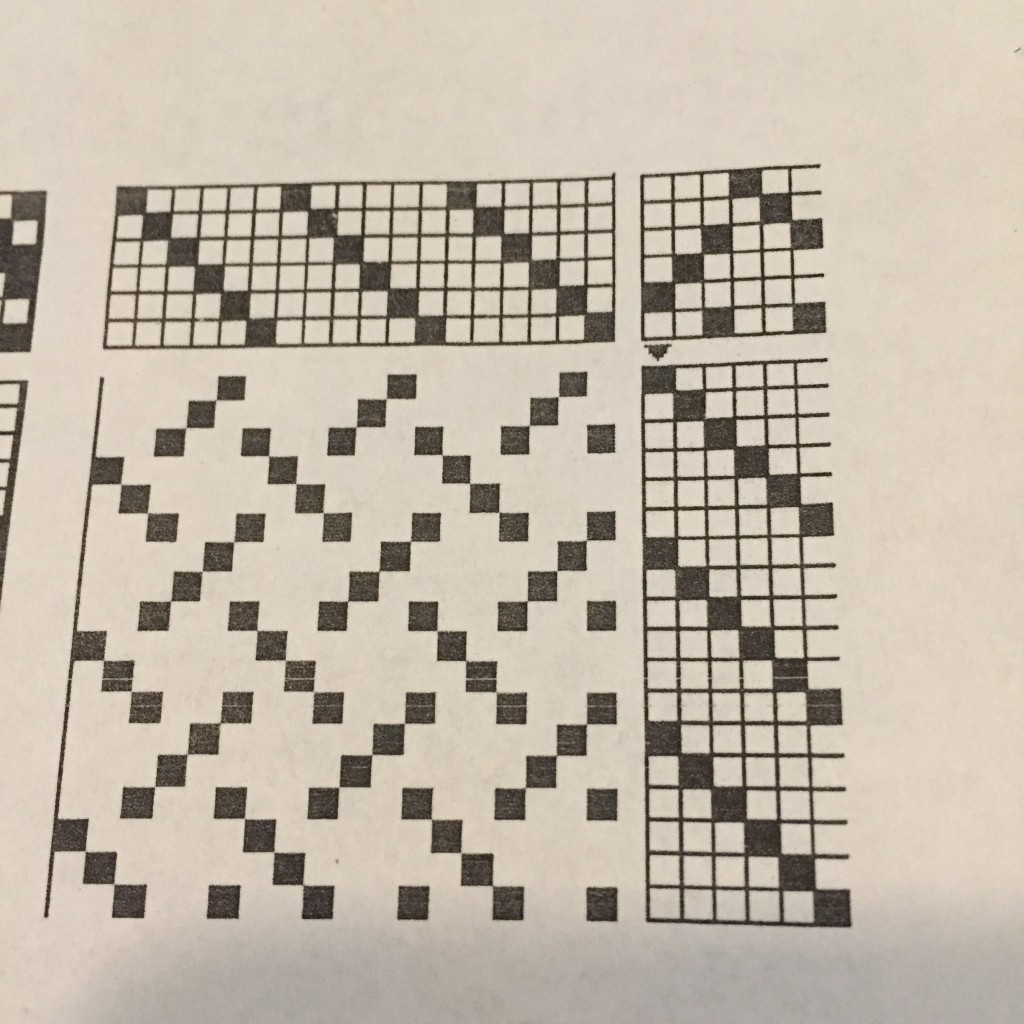 Here is the draft.  The huck draft of little sections of 5-thread repeats that create either a weft float or warp float are threaded according to the twill pattern above.  There has to be a better way to say this, and when I find it I will rewrite! 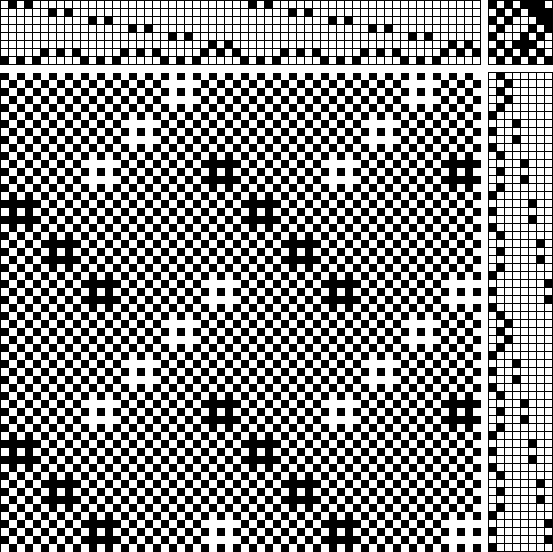 I  wanted a subtle woven huck fabric so for the warp I used three very close colors of 2-ply wet spun linen whose weight is a bit heavier that 16/2 linen.  I’m sorry I cannot say exactly what it is.  I have a large stash of unlabeled linen cones of linen and silk cones from a dear weaving mentor, and none of them are labeled!

WARP
Laurie recommended that I give the McMorran yarn balance information about the yarns I used.  I have never felt confident in trusting this little device.  When I perform the procedure on the same yarn multiple times I never get the same number!  My three warp yarns gave me a range of yardages from 1325 yards per pound (ypp) to 1750 ypp.  They are slightly different  grists, so it is conceivable that their yardages would be somewhat different, but a difference of over 400 ypp is a bit untrustworthy to me.   And here is another reason that it is hard for me to trust this little gadget!  My cones of linen are thicker than 16/2 Bockens linen, yet they also look like they have less twist.  That might make them lighter weight in spite of looking thicker.  Yardage for 16/2 linen is 2700 ypp, and my ‘thicker’ yarns ranged from 1325 – 1750 ypp.

I made the warp by holding the three yarns together, separated between my fingers.  I put the spools on a spool holder and ran the yarns up to a hook in the ceiling and then down to my finger tensioning technique.  I made a 1 x 1 cross since the yarns are a little hairy and I didn’t trust having adjacent yarns in the same cross.  My warp was sett at 12 epi, and sleyed 2-per-dent in a 6-dent reed.  The warp was 25″ wide and I used my Baby Wolf for this project. The pattern repeat for this draft is 30 threads.  At 12 epi with 10 repeats I needed 300 warp threads, which was 10 pattern repeats across the warp.

WEFT AND WEAVING
The weft is a single ply linen that is rougher than the warp.  It has lots of thick and thin areas, so I think the McMorran yarn balance will be even less accurate.  I measured three times and averaged my findings for a result of 1900 ypp.  I wove to square the pattern. After weaving the necessary yardage for the front and back of the bag, I wove plain weave to the end of the warp for the handles and the top of my lining.

FINISHED FABRIC
I wanted the front and back of the bag to be roughly square before doing the box corner at the bottom.  I have a tote that I made from commercial fabric that I cut 24″ square to begin and I love the proportions of that bag.  I knew I would not get a finished fabric 24″ wide on the Baby Wolf, so I thought I would just use whatever width I did end up with for making my size determination.  After washing the width of the bag was about 20″.  I put in cutting lines (two plain weave picks in a contrasting yarn) after weaving 24″.  I thought the shrinkage would be greater lengthwise than in the width, but my cutting lines ended up longer than my fabric was wide.  If I had not woven in these cutting lines, I could have changed the proportions of my bag.  With the cutting lines I put in, the bag became somewhat taller than it is wide.

This photo was taken after I machine washed the fabric on a normal setting and set outside to dry.  You can see the cutting lines and where I switched to plain weave (at the top of the photo) for the handles and part of the lining.  I used a commercial linen fabric for the lining;  it is brown/tan/black plaid that you can see in the little loop for the button in the next photo. 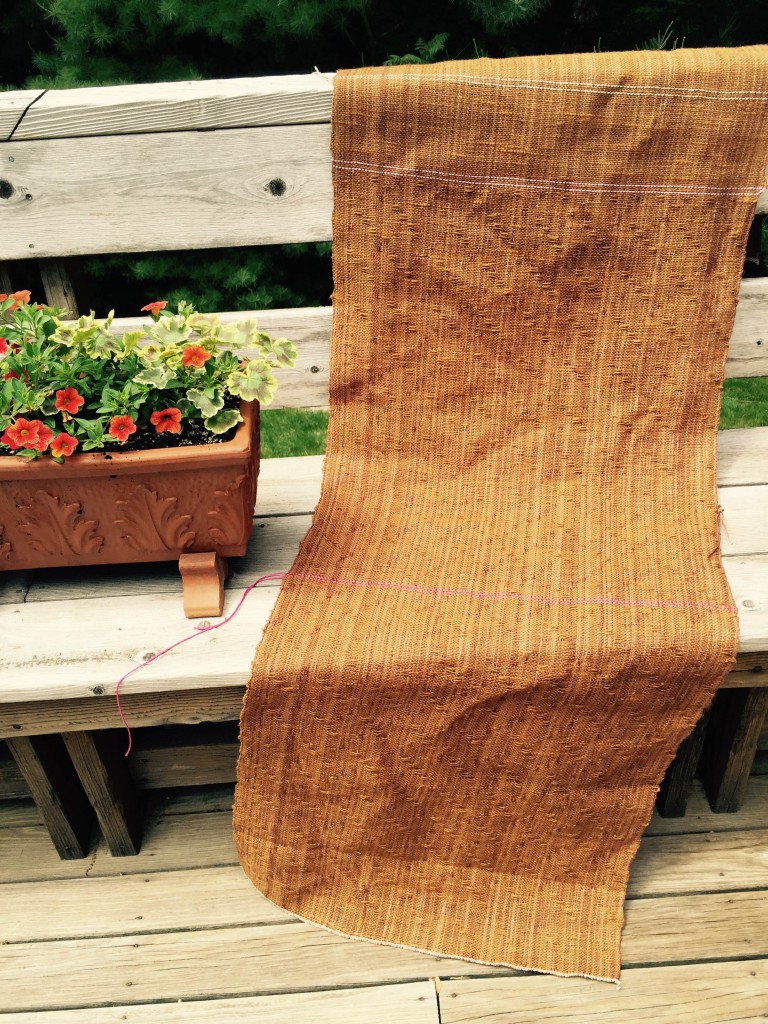 SEWING THE TOTE BAG
You can use the directions I wrote for the smaller tote bag that I made last summer, changing the size of the pieces you cut to match your fabric, roughly 20″ wide by 22″ long.

For this particular bag I used the directions below.  After some thought (and because I did not have enough handwoven fabric!) I decided to omit the zipper that is detailed in the beginning of this video.  I am now happy that I decided to omit the zipper since the bag opens wider with only a button and loop closure.  The contstuction method for this bag has different order of sewing the pieces than my written instructions from the previous bag, and I just loved having the handwoven fabric at the top of the lining.  I think that is more professional looking. 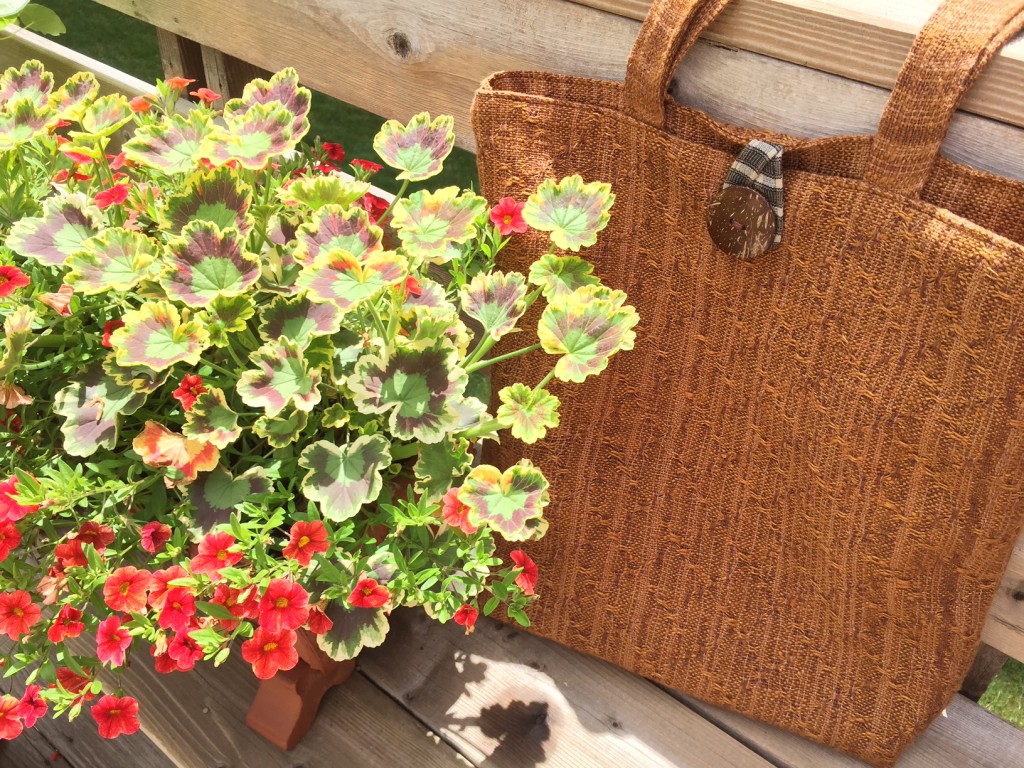