About three years ago, a good friend of mine died from complications related to breast cancer.  She was a very artistic woman, someone I admired.  She wore her handwoven clothes with enviable flair, and she knew how to accessorize.  When she could no longer sit at the loom she continued to knit accessories that were as striking as her woven items. 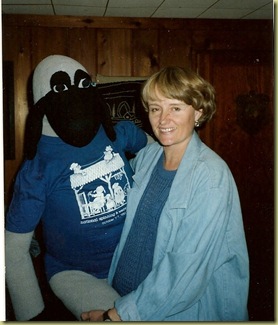 (Well, this is not the best photo to demonstrate Bonney’s fashion flair, but do notice the t-shirt on the sheep                commemorates National Spinners and Weavers week!)

Her daughters held a sale before selling her house, and I got some precious items which always make me think fondly of Bonney’s friendship.  I have two shirts, commerically made, that look deceptively handwoven, a sterling jewelry pin of a castle-style spinning wheel, and Bonney’s 8S  Baby Wolf.

When I got the loom it had samples on it, lovely samples of what looked to me like a ‘Sharon Alderman’ fabric.  There were several small samples, separated by unwoven warp.  The warp looked like 20/2 mercerized cotton in a medium grey.  The weft was the same size cotton in ‘rust’ or ‘burnt sienna.’  The color difference between the warp and weft made a lovely iridescence in the fabric, giving the finished cloth the look of silk. 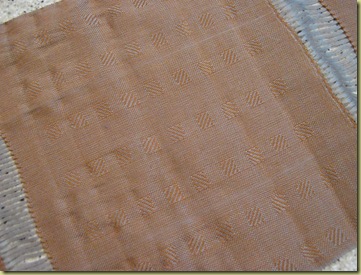 I thought of weaving off the rest of the warp, but when I went searching for what the treadling might be I did not find this pattern. Also, I did not have the weft.  Eventually I cut the fabric off the loom so that I could warp it for a weaving workshop.  I thought I might serge the fabric samples and give one to each of Bonney’s good friends in my guild, keeping one for myself.

But I never did it.  The fabric has lain on top of my serger now for three years….

During these three years my path has occasionally crossed the path of another New Jersey weaver from the Jockey Hollow Guild.  I heard her name numerous times through mutual acquaintances, and I finally met her during her guild’s holiday sale last December.

Last week when I had again warped this loom in readiness for a weaving workshop from the Jockey Hollow Guild, Sally was the organizer, so our paths crossed again.

At one point during the workshop Sally offered to tweak my loom into better working condition.  I mentioned that this loom had belonged to a good friend who had left this life.  I asked if she had ever known Bonney, who had on occasion attended meetings at Jockey Hollow.

Well, Sally did know Bonney. In fact, some time before Bonney’s final days, Sally had visited her to weave off some samples that were part of an exchange (indeed, a Sharon Alderman design). Shortly after that visit Bonney died, and Sally did not know what became of the samples or of  Bonney’s loom.  The participants in that exchange never got the samples.

Isn’t it interesting that I had wanted to give those samples to some of Bonney’s friends, but I just never could bring myself to cut them apart and serge the ends?…. and equally interesting that I kept hearing about Sally from a couple of friends.  I, too, had visited some meetings of Sally’s guild, but I did not met her until recently….  And it is interesting that we did not get to the subject of Bonney and her loom on our first meeting, but obviously it was meant to come about at some point.

I think Bonney knew it would happen, all in good time, and I think she smiled when it finally did.  I will miss seeing the yardage in my studio, but I’m immensely happy that it will go to the recipients who were always meant to have it.  It’s a lovely length of finely woven cloth.  Good weaving endures, friendship endures.  It’s all good.

This entry was posted in inspiration, patterns, serendipity, weaving. Bookmark the permalink.

4 Responses to >A Weaver’s Legacy