Moments after posting the last entry about Deflected Double Weave, I happened to open the current issue of Vav Magazine to find an article about this written by Madelyn van der Hoogt, along with a project for weaving DDW circles.

In the article, Madelyn credits both Mary Meigs Atwater and Ulla Cyrus-Zetterstrom with publishing some of the earliest examples of DDW.  You can find Atwater’s pattern in her “Recipe Book” under the title “Ancient Colonial Shawl.”

As you can see, I am sitting at my kitchen table this morning, enjoying the early spring sun while delving into these wonderful old resources! 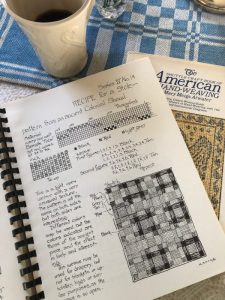 In the notes, Mary describes the fabric as an “open weave with a very unusual texture.  The pattern is not the same on both sides, but both sides are interesting.”  She recommended Bernat’s “Fabri,” set at 24 epi and woven to balance.  I think this yarn may predate my early weaving explorations from the mid-1970s!  A search yielded this photo of the yarn label and information that Fabri was a lace weight, 100% wool yarn, that came packaged in 56 gram balls, with 156 yards. 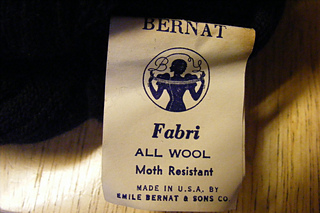 In case you want to dive through your resources for other articles on DDW, here are a couple of photos of the covers you’ll be searching to find.

I have the Swedish version of this book, and so far I have not found the DDW project which is listed as being on pages 122-123 of the English version.  Aha!  I found it!  –on pages 106-108.  In Swedish it is fargeffekter–which I believe is color effect.  There are other weave structures in this section such as ‘log cabin’ and houndstooth twill.  There are three interesting examples of what we now call Deflected Double Weave. 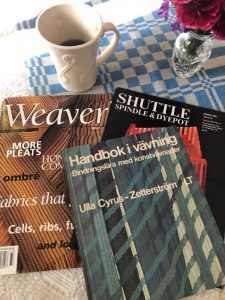 And here are some articles from various periodicals.  Dini Moes’ article in “Shuttle, Spindle, and Dyepot,” Issue 54, Spring 1983, proved to be quite interesting.  In the article she says the woven shawl she first saw in this technique was described as “two-faced, false double weave” by the weaver.  After Dini studied it herself, she called it ‘integrated weave,” which does describe what’s going on very well.  There are two separate cloths being woven as in double weave, and then there is a patterning area where the two cloths weave together with floats that become deflected once the cloth is removed from the loom and wet finished. The photographs that illustrate this article are terrific!  I’m inspired!

Dini Moes’ article in Issue 37, Fall, 1997, of ‘Weaver’s” magazine also has some great images, and she has a 6-shaft pattern among the various 8-shaft pattern ideas.

Lastly, I visited Janney Simpson yesterday, a friend from my local weaving guild who has done quite a bit of experimentation in this structure (see Handwoven, Nov/Dec 2016, for her article and DDW scarf project).  I am considering one of her looms as a replacement for two of mine.  Does this make sense?  I think by combining the advantages of both my AVL 16-S loom and my large 60″ wide Toika into one loom,  I can have more studio space, which translates to more commodious space for my new taka dai and a bigger cutting table for sewing.  I am leaning toward buying a 60″ AVL compudobby with 16 shafts.  My friend’s house is full of looms!  Yesterday I saw that most of her looms had various DDW projects in progress.  It was an inspiring visit!

Now I am well armed with information and ideas for some future DDW project.  I rather like the idea of circles.  I just need to finish the long warp of DDW that I already have underway….and my latest braid on the taka dai (I chose #25 to test Bob’s koma), and I also need to get serious about drawing ideas for my ‘next big thing’–the long planned Portuguese Man of War tapestry.  So many temptations, so little time!