Textiles in the Caribbean

Time to get back on track a bit and talk about textiles!  It IS the driving force of my visits to any location, so I’m always on the lookout for any kind of textile handwork.  And I have not been disappointed this winter!

Some of the places that are well known for handwork have not fallen in our path this winter.  They will be on my list for future visits, but I’ll still mention them here.  Perhaps the most intriguing place is the island of Saba, which lies off the coast of St. Martin.  It is one of the many volcanic islands that make up the Lesser Antilles, and may be the mmost dramatic.

It does not have a good harbor, so sailors must carefully choose a weather window for visiting.  That did not happen for Bob and me this year, although we could have taken a day trip by ferry to visit.  This island has underwater volcanic mountains with coral reefs, so it is also known as an excellent dive site.

In our sailing guidebook (Cruising Guide to the Leeward Islands) I read that Saba is only 5 square miles but rises to 3,000 feet in that small area.  It was settled by Dutch, Scottish, and English farmers, along with their African slaves.  Over time they all worked side by side to eek out a living on this steep and rugged island.  These settlers became fisherman and farmers and boat builders.

Until the 1940s, all ships came into Ladder Bay, on a dangerous shore that provides little shelter from ocean swells, where access to land was via an 800-step track that was cut into the rock.  Really!  I’m almost afraid to visit and be found to be the biggest cream puff the Sabans may ever encounter!

In the 1950s, some Dutch engineers determined that the island was too challenging to build roads, so one elderly local took the initiative to study road building via correspondence class and shortly after, with his knowledge, the Sabans hand-built their road, finished in 1958. I guess they don’t easily take ‘no’ for an answer.  The women have become skilled in needle lace which they originally learned from lace makers in Venezuela.  Since living on Saba is very isolated, over time their designs have taken on a specific nature that makes it truly theirs.

I found some images online and links to information about lace making on Saba, but most of them will not open since we have slow internet here.

The inactive volcano on Saba is named Mount Scenery, and I bet it is quite a scenic place!  There is a museum on island that I look forward to visiting someday. You can read about the museum here and their collection of lace here.  And, lucky for me, since it is a Dutch museum, I bet the information will be in English!–a nice change from the French islands where English is not an option.

I should mention that although Iles des Saintes and Marie Galante (the islands just south of Guadeloupe) were discovered by Columbus, they have been French since very shortly after they were colonized.  Until recently, the fisherman here used boats like their fishing forbears from Brittany used.  I am sorry I did not get to see a fleet of those boats. When we arrived on Terre de Haute a few days back, I took some photos of the textiles inside the church in the center of town. 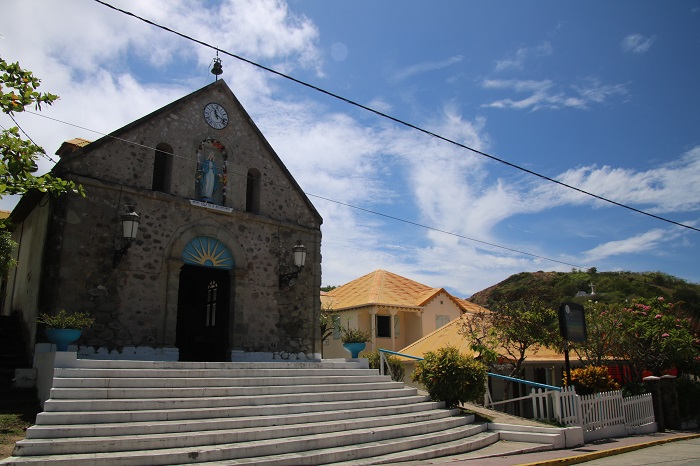 From the back of the church seeing this altar cloth drew me right in. 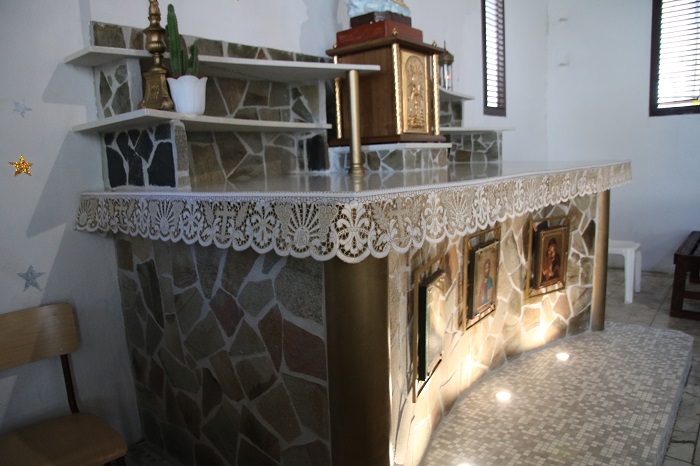 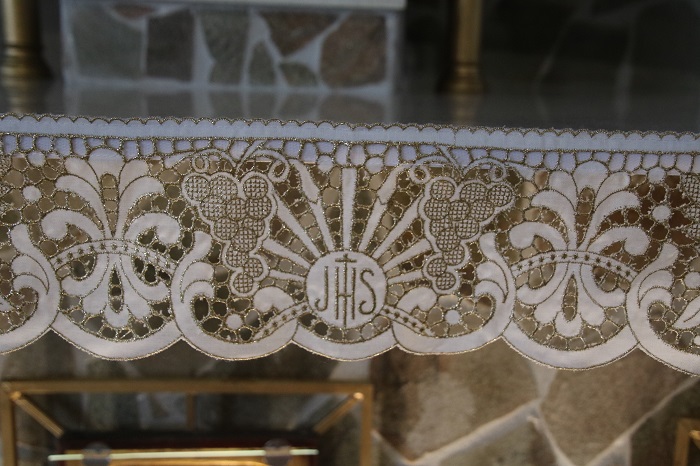 and from the back entrance I thought the pulpit drape might be filet crochet.  I’m glad I took a closer look because it is needle lace.  I have no idea how Saban needle lace differs from other needle laces, such as this, and hopefully I’ll learn a bit more about that on future visits. 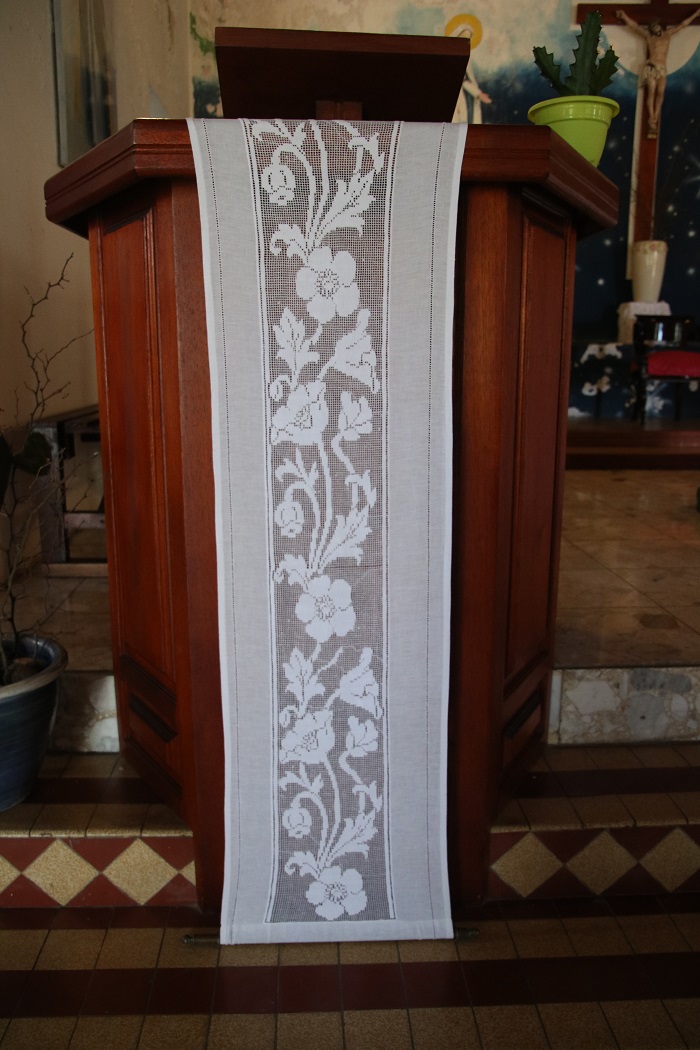 Along the road to the church there are many shops, and one of them is a clothing and accessory shop, called Maogony where everything is dyed blue.  The two owners, Annie and Chakib, use three colors of blue dye to create garments that reflect the colors of the Caribbean waters that lie right outside their store.  Annie and I talked a bit, and I tried my best to understand her excellent English. 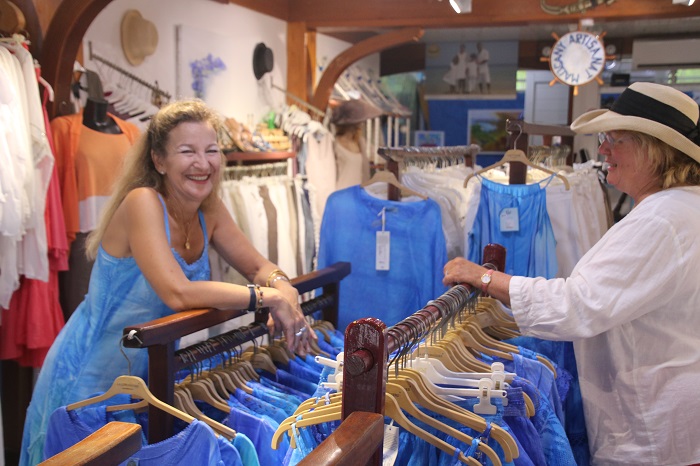 When she described her process, using blues she called cobalt, indigo and turquoise I began to think she and her partner might be using Pro Chem MX dyes.  She said they set the colors in the sun and then finish with a hot mangle before washing them. Their mangle is against the back wall in this photo. They work with garments made from cotton, silk and linen. 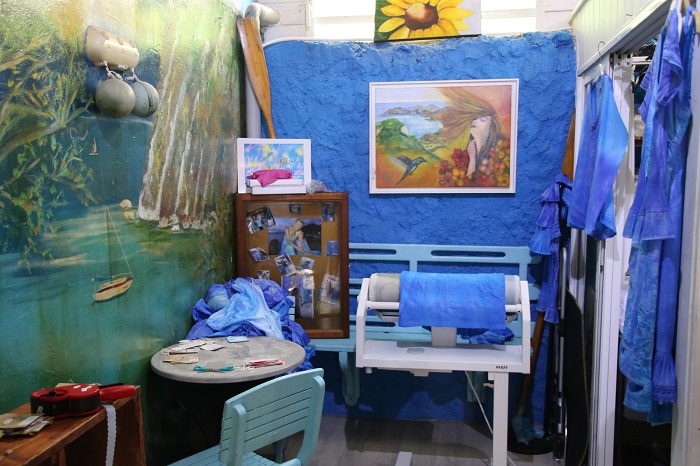 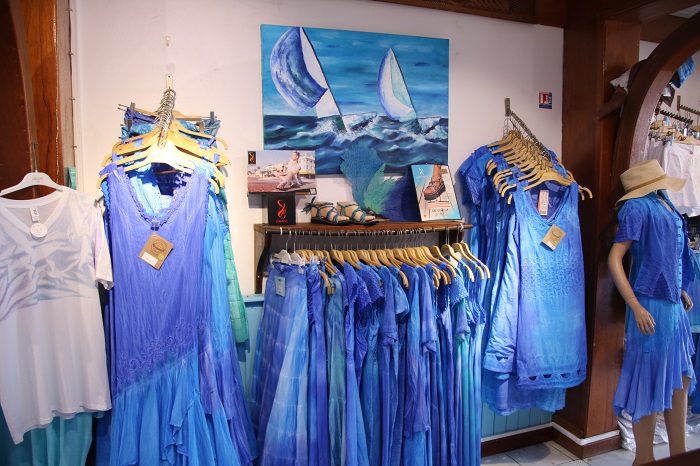 Just east of Iles des Saintes is an island called Marie Galante.  According to legend, Columbus had already used the names of all the saints that he cared about, so had to resort to some other source for a name for this island. Marie Galante was the name of one of his ships.  There is an indigo dyer on Marie Galante, and I believe she uses the natural plant dye for her work.  I know nothing about her, but am certainly hoping that I’ll meet her next year!  She has a website and a facebook page called Maison de l’Indigo.

Another island we did not get to visit this year is Montserrat, which still has an active volcano on it, Soufriere Hills–the only active volcano in the Leeward Islands, and perhaps in the Caribbean. The original settlers were Irish, and today Montserrat is known as the ‘other emerald isle.’

I have heard there is a mother/daughter weaving team here who weave with sea island cotton. I found Sophie Bufton’s description about her visit to the weavers. This photo is from Bufton’s site.

What I learned from this limited and torturously slow internet search is that the sea island cotton on Montserrat had the longest fibers of any cotton in the world, and that was due to the volcanic soil on this island.  The cotton plants and the spinning factory were destroyed in 1995, the first eruption of Soufriere Hills which destroyed the capitol city of Plymouth where the spinning mill for the cotton was located. This eruption not only destroyed the cotton crop, but also two-thirds of the island.  In the early 2000s, the dome of the volcano collapsed, after a few more years it seemed that the volcano had become inactive.  In 2006, there began to be activity, and another eruption in 2008, has put that theory to rest.    Yet it appears that the weavers are still working with sea island cotton.  I’ll write more when I can get better access to the information.

The internet can be such a treasure trove.  I found this stamp with an image of a spinning ginny and a young Queen Elizabeth.

Madras fabric, originally from India, is considered the national dress of several of the islands in this area — Guadeloupe, Martinique and Dominica.  You can buy almost any kind of souvenir in madras, including plastic key chains and serving trays.  Our granddaughter Tori will be getting a madras sun hat in a couple of weeks.

This part of the world holds a fair amount of geographical confusion for me.  We are in the Caribbean at large, but the particular area we have traversed this winter is known by several labels:  the West Indies, the Lesser Antilles, the Leeward Islands (as opposed to the Windward Islands).  It’s a lot to comprehend, and I just keep looking at the charts to orient myself.  We are in the southeastern part of Caribbean island chain, just before the chain heads due south ending at Trinidad, near Venezuela.  These islands are known as the West Indies because there were slaves brought here from India, and that culture has lived on in West Indian traditions such as food and music.  There is plenty of African cultural influence which melded with the India culture to create something entirely new.  There are so many labels that include ‘west’ and ‘east,’ and also also ‘leeward’ and ‘windward’–how can I keep up??

This entry was posted in bobbin lace, Lace, sailing, travel. Bookmark the permalink.