Everyone turns out on Sundays in Havana. The weather is always fine, so why not? I found more women crowded around Adriana late Sunday morning., and we had another session of exciting talk about handwork.

Since Adriana’s table was not covered in other people’s work in need of her advice, she showed us the progress she has made on her lace blouse. She is more than half finished. Very soon I became too involved in conversations to take any photos, so I’m glad Bob took a lot! 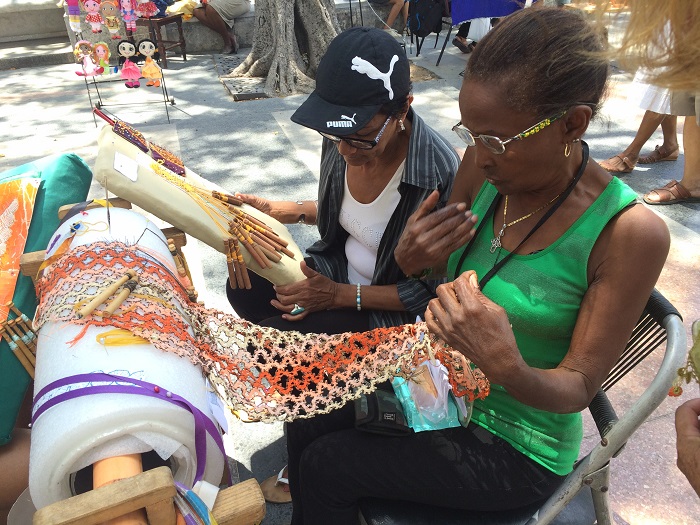 Look at the wonderful work these women are doing. A beautiful bobbin lace (bolillo) piece. 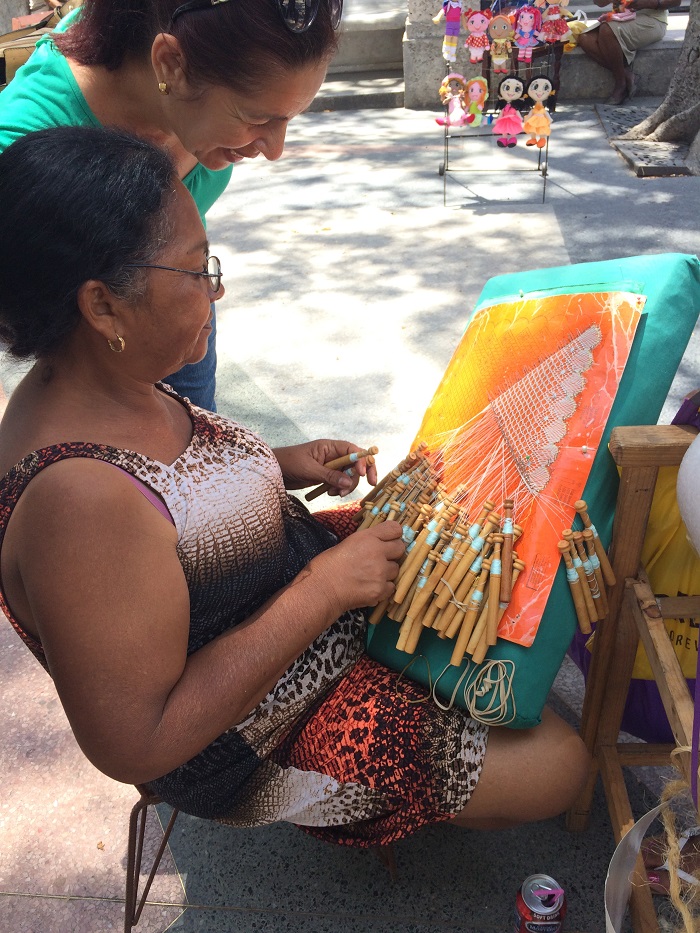 Tatted sleeves, anyone? I would never have thought of it! This is tatting with pearl beads, and is a stunning piece. In black and white it would make the most elegant eveningwear, attached to a silk tunic. The tatting was perfectly done. Doesn’t it look fabulous on Adriana? She did not make it, but since she was wearing the perfect green tank top she had to model it! 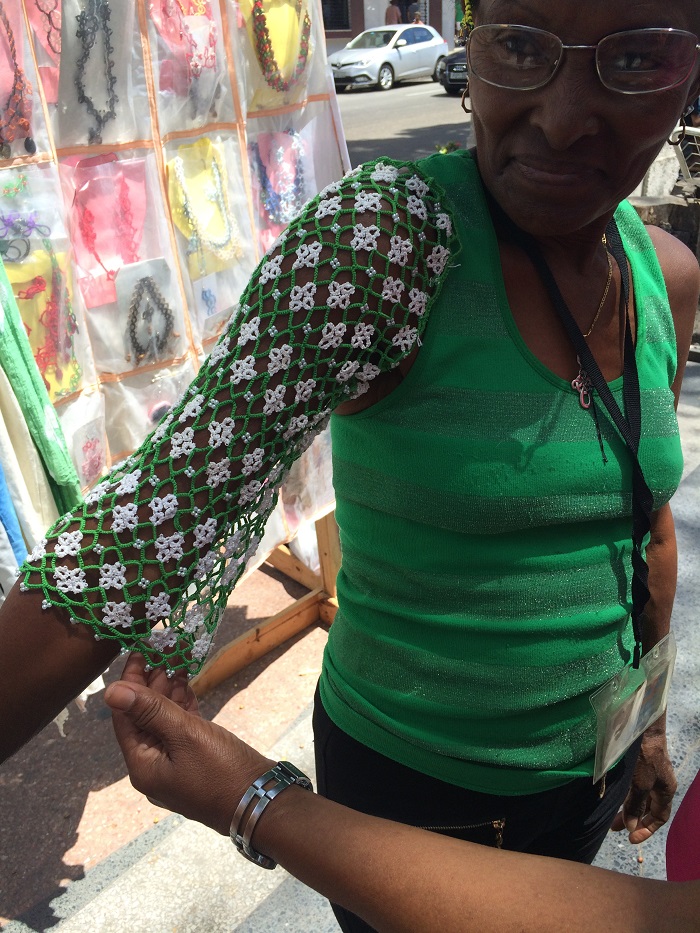 I happened to wear one of my Turkish scarves, which all the women loved. They asked to take photographs of it because they want to try their hands at crocheting this type of edging with fun, dangly flowers. I bet they’ll have it figured out in no time! 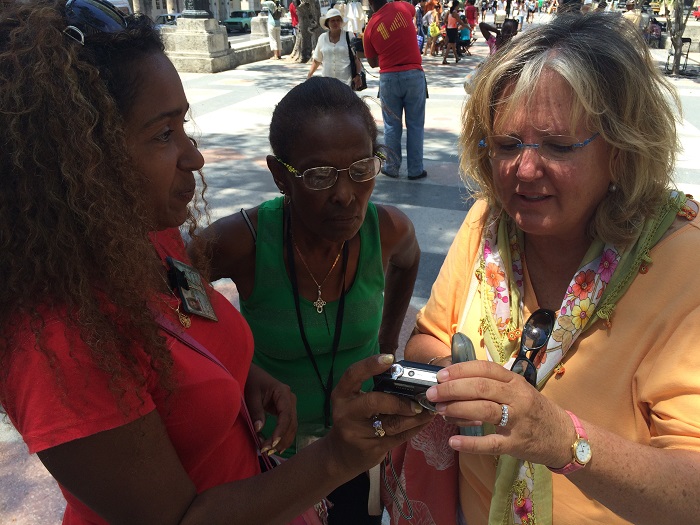 Dazmira has her own booth nearby Adriana, where she displays her crocheted blouses, little girls’ dresses, handbags and hats. She buys large containers of the pull-tabs from beer bottles for $1 CUC (about $1.15 US) with which she embellishes many of her handbags and hats. She also crochets with plastic shopping bags and old video tapes. You can find her on Facebook as Dazmira.  I’ll post a link when I get home.

As is typical in Cuba, you cannot give a gift without getting something in return, though this has taken almost two months for me to realize. I think this is what caused some awkwardness when I gave away some spools of tatting thread to the teacher at the Women’s Federation in Santiago. Here, though, it was wonderful to see Adriana’s face light up with the spools of lace thread I brought for her. She showed me a baby’s outfit she made with this type of fine cotton. She took the pattern for a handkerchief edging (perfect square opening in the center for the neckline) and adapted it to make the bodice of a little boy’s one-piece suit. I got weak in the knees when I saw the lace bodice on this outfit, but I could not bring myself to buy it. I don’t have any grandchildren yet, and I don’t want to jinx it!

Instead I bought two beautiful pieces of tape lace and a small Torchon centerpiece. 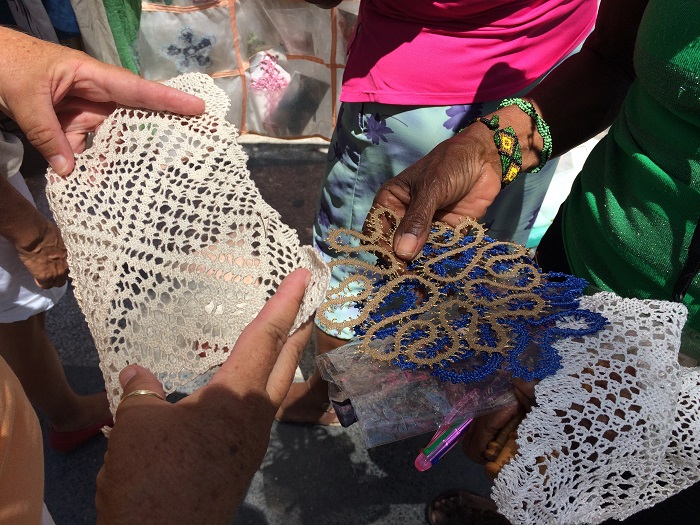 Adriana gave me a pair of tatted earrings done in navy and pale blue with fire polished crystals! I treasure them!

I don’t remember this woman’s name, but she turns out a lot of elaborate tatted projects. She made the interesting green and white beaded sleeves, and here she is modeling (against her will) a lacy tatted hat that has not been starched yet. It will be such a frivolous and fun accessory when it’s finished. 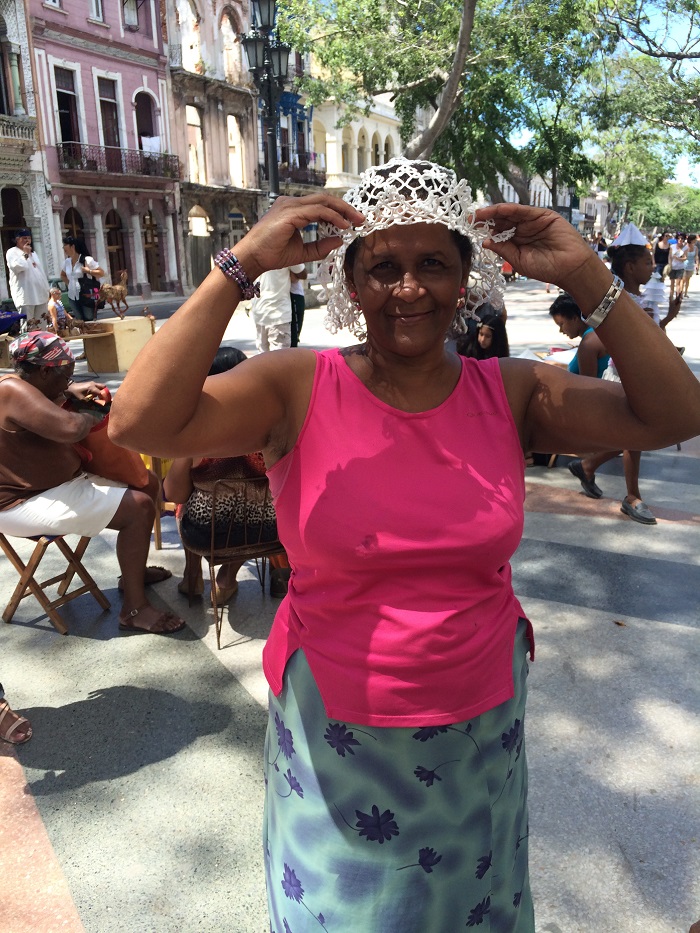 The materials available in Cuba dictate the projects these women make. Most of the cotton threads are thicker than we are familiar with for doing tatting or bobbin lace. If I’d known so many of these women tat, I would have brought much more of that. Ah, well.   The tatting projects and bobbin lace projects are done with cotton that is considerably thicker than what we use in the US. Some of it looks like cotton floss, but even thicker—almost like a 12 strand floss. I can see it is NOT easy to work with in tatting because it splits so easily. Still, these women manage very well.

Adriana believes that they can now receive mail from the US. Boy, I hope so. I will send them more fine threads to work with. They oohed and ahhed over the threads I brought with me, and of course you can fit a lot of thread in a small package. The problem will be with mail service between the US and Cuba, and hopefully Adriana is right that things have already changed.

Internet in Cuba is challenging since it is rationed, so although there is plenty of information online these women cannot access it.   I bet it will be at least a month before I settle back into taking internet access for granted when I get home. It’s been highly frustrating here!

There were two handwoven scarves on Adriana’s display. When I questioned her about them she told me they had been woven by a man. I made all kinds of motions to describe a rigid heddle loom, and she was nodding her head through my whole pantomime, so I think that’s what was used to weave these scarves. 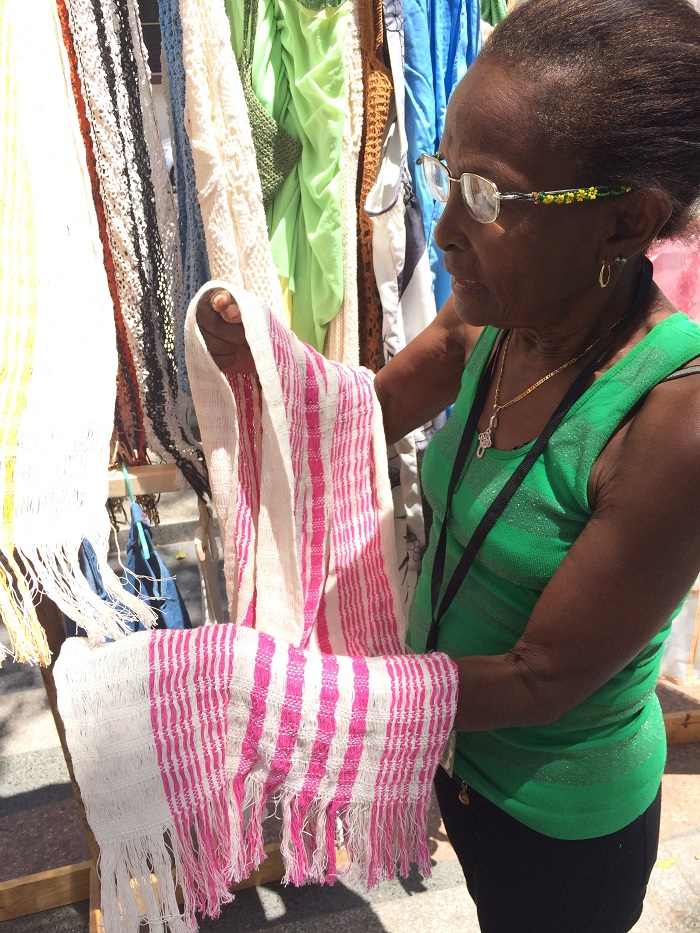 Adriana is very interested in having instructions to make a simple floor loom, so I will be on the lookout for that when I get back home. I have not found any handweaving in Cuba, and she confirmed that herself. She did not know the word for handwoven in Spanish, nor the word for ‘loom.’ She was calling it the ‘machina por maya,’ the machine for fabric, until I wrote down the word ‘loom’ for her in her notebook.

Hidalgo joined us again, and Adriana teased him that he already knows so much about handwork he should start crocheting himself! And that’s when I learned that he paints, and sculpts and does woodworking in his free time. The people who have booths on the Paseo del Prada are very interesting, and I know I would enjoy getting to know them better! I hope we can stay connected through email…we have all exchanged email addresses.

In the end we discussed the value of handwork. When I said that not many women do handwork in the US, and that when they see it for sale many women are shocked at the price we ask for handwovens, lace, knitting…etc. These Cuban women agreed. They said young women in Cuba want inexpensive, manufactured garments. We agreed that in both the US and in Cuba women who do handwork are the biggest supporters of textile handwork! We buy from each other! In the photo below, from left to right: me, Adriana, Nancy, and Dazmira. 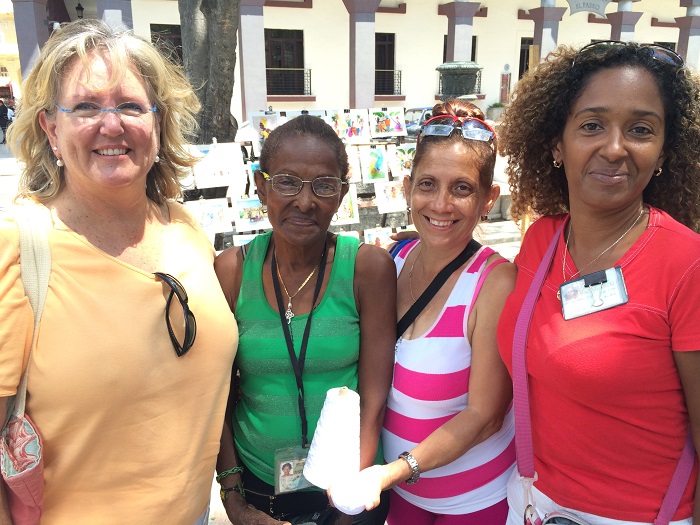 Later in the day, near the restaurant we enjoyed on Mercederes we found a small gallery of woodcut prints. A group of artists were working together, sharing a printing press that had been donated by Unicef.   The gallery itself was part of a beautiful historic building. 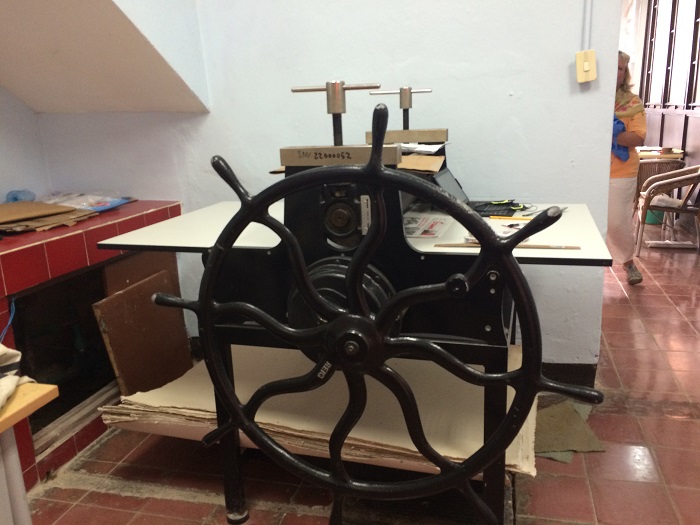 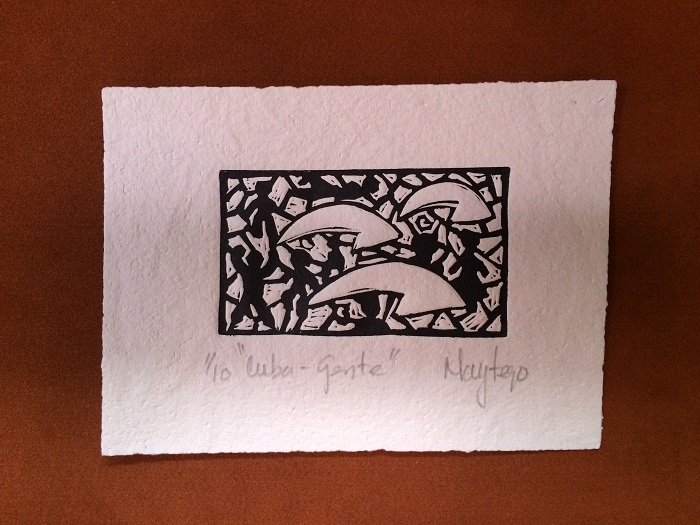 We ended the day with an early dinner at an outside café called Dominica, where the music was more intoxicating than the mojitos! First a band of men playing xylophone, bongos, guitar, saxophone and string bass, followed by a ‘girl band’ playing keyboard, saxophone, bongos and string bass, with a wonderful female lead singer. Beyond mariachis there are some other interesting percussive instruments, including a hollowed out gourd that has grooves incised along one side. You play it by rubbing a stick across the grooves, and it adds a wonderful rhythmic nuance to bongos and mariachis. I don’t know what it’s called—maybe it’s just called what it is!—a gourd. I love the rhythms of Cuban music— samba and bossa nova. Fantastic! You cannot sit still to this music, which must by why Cubans, and many tourists, are always dancing!

This entry was posted in crochet, Lace, travel, weaving. Bookmark the permalink.