National Day for Women in Cuba

Our first trip into downtown Santiago de Cuba happened to be a national holiday for women so the city was hopping. Men and women clogged the streets, children were not in school, street vendors were selling flowers and candy, and there was such an air of festivity all around us.

The streets are old and narrow, and the sidewalks even narrower! It’s a given that pedestrians do NOT have the right of way, so you step into the street at your own risk. Very few intersections had traffic lights and even fewer had the little walk/don’t walk signal. The sidewalks were so narrow that many times you had to step out into the street just to move through the crowds of pedestrians. It was a great day to see this city in full swing! 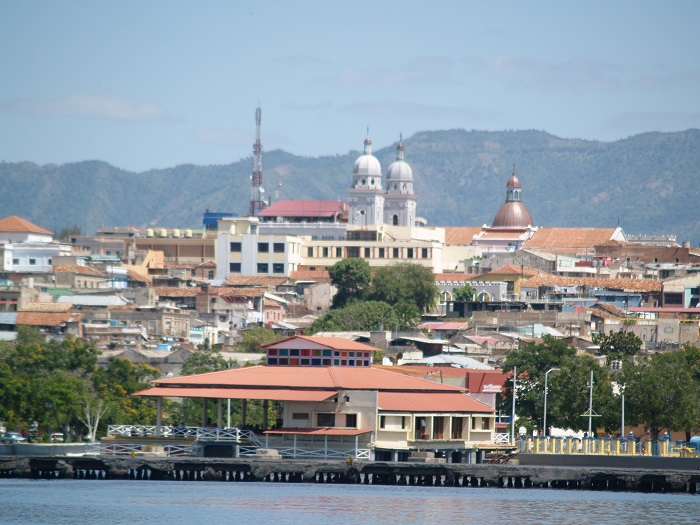 We had been advised to change our money at a Cadeca (a money changing facility) because the lines at any bank would be frightfully long. As it turns out there were lines at the Cadecas as well, but they were somewhat shorter. It was all very 3rd world and communist. The lines form outside these establishments, on the hot and narrow sidewalks. There is a guard who lets someone into the building each time someone leaves the building. Inside there is a shorter line, and another guard signals the person at the head of the line to move to next free teller. It took us about 20 minutes to get to a teller, and when I saw a couple of banks later in the day I can see that we made the right choice.

Now here is the funny thing about money—the exchange rate seems to be whatever the Cuban government wants it to be. The US dollar is .87 to a Cuban CUC, and I feel quite certain this not supportable in the world market. We had read in two guide books that there was an extra ‘tax’ on US dollars and it is better to have either Euros or Canadian dollars to exchange. We opted to bring CAD with us. Well 1 CAD is .55 a Cuban CUC, so we have only half the money we thought we had to spend here. Yikes! We should have brought Euros, which have an even exchange rate. Because we are from the US we cannot get any funds from our banks, and we cannot use our US credit cards, even the one that we got for use outside the US. When we returned to our boat last night, we took a hard look at what we have and made a budget. I think we can just get by!

Like many old cities Santiago de Cuba has a public park every few blocks running up Aguilera Boulevard from the harbor up the steep hill that eventually leads into the rural Sierra Maestro range. This is the oldest part of the city, crowded but beautiful, with old colonial architecture. Santiago de Cuba is known for having the unspoiled colonial architecture, along with the oldest surviving building in all of Cuba, the house of Diego Valazquez, built in 1522. 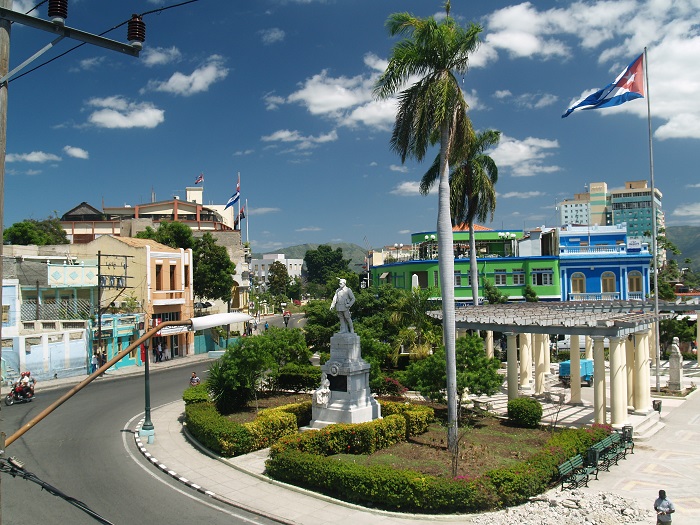 And it is also known for having the most motorcycles in Cuba, and this is what pedestrians must take care to avoid when walking about the streets. It is amazing how many motorcycles there are, most with no mufflers. They dart in and out of traffic, so that you can never be sure when you step off the curb that one might not suddenly cross your path. The streets were full of interesting vehicles and all seemed to love honking, all day… old American and European cars that had been repainted many times. We’ve heard that the engines are most likely no longer original, but a mixture of whatever can be found and refurbished. Many of these cars have Russian or Eastern European engines. There were plenty of small Russian Lados on the streets, and our driver, Noel, shuttled us about in a car with an unrecognizable name from Czech Republic that was 30 years old . Many of the American cars, being so much larger, had been converted into ‘buses’ by removing the back seat of the car and adding on something like a pickup truck bed on a larger scale. There were benches back there that could hold 10 or 12 people, and these vehicles seemed to be getting a lot of business. I was very glad to have a driver with a car! He’d been recommended to us by a Canadian couple who were just leaving this port when we arrived.

This Carmen Ghia is now a taxi. Tempting…but quite small for taxi, don’t you think? 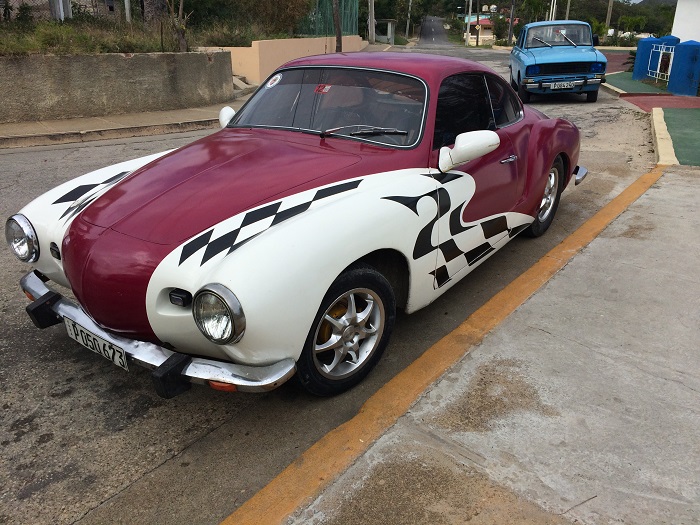 We had planned to spend our day walking through the historic district, having lunch at the Casa Granda Hotel, then touring the Casa de Diego Valazquez. But just walking around took longer than we expected, and by the time we got to lunch—roughly 3-ish—which also took longer than we expected, we decided to relax on the balcony of this stately old hotel at a table overlooking the square with a delightful breeze blowing straight up from the harbor. So we never made it to Valazquez’s house. We will definitely get there before we leave. 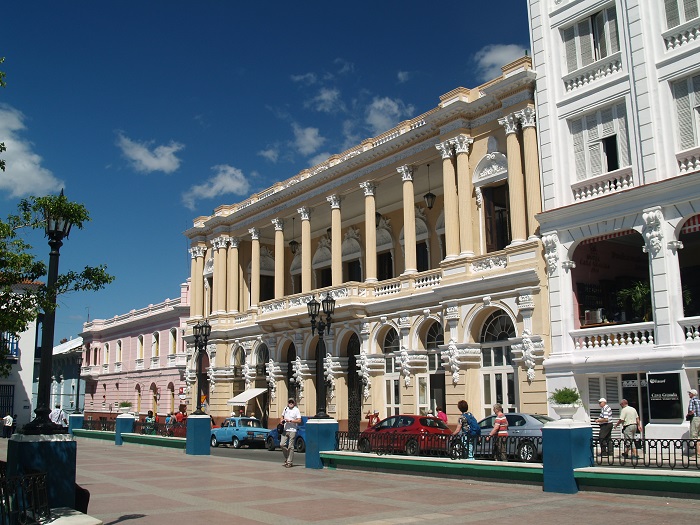 Earlier in the  morning we stopped at a café and had a wonderful Cuban coffee with steamed milk. After that we walked along the Jose A Saco Boulevard, which is for pedestrians only (thank heaven!) and has many shops and street vendors selling crafts from woodworking to leather work (very little textile handwork). It was fascinating to us that so many shops sold exotic birds. I wonder if Cubans keep birds for pets the way we keep dogs and cats. I’ve never seen so many colorful parrots and lots of other beautiful birds that looked like variations on quail or guinea hens. 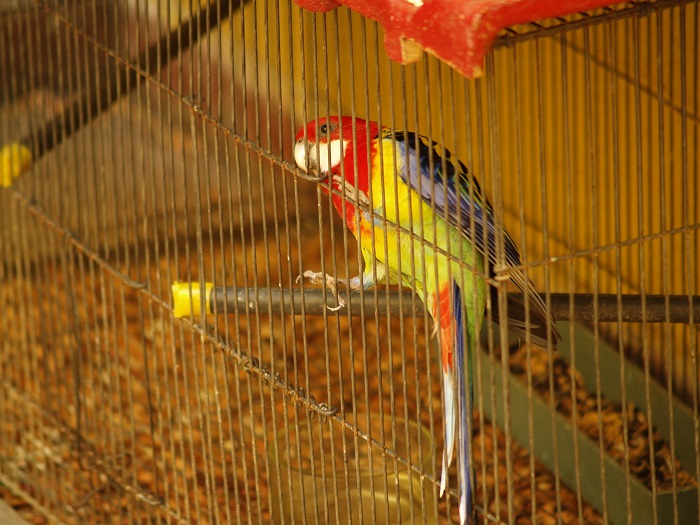 The shop entrances are a bit high off the street, maybe just above knee height, and there are the tiniest little cement block steps to enter these shops. There are no railings to hold on to, but sometimes a metal bar in the wall that you can grab if you are feeling unsteady on your feet. I am always feeling unsteady on my feet! Only one person at a time can go up or down these tiny steps so that seems to manage the flow of who is coming out or going into the shops.

The highlight of my day—and probably the biggest reason why we did not have enough time to see the Valazquez museum—was that I saw a woman sitting in a large unglazed window doing some very fine crochet work. Her window was next to a shop full of men’s wedding shirts. I went into the shop thinking I could access the room she was working in from there….but no. There was a door that probably led to where she was, but it was closed. So I went back out on the street and talked to her from there.

First I should say that I had already questioned a few people, and then tried to confirm my knowledge with Noel, about the Spanish words for various types of handwork. Crochet is crochet, ‘tejer’ is knitting, ‘bolillo’ is bobbin lace. Noel, our driver, said that many women do handwork but that he is not familiar with names of all the things they do. He said his grandmother had been doing ‘tejer’ for about 75 years, and he confirmed that it is knitting by saying it has two needles rather than one. I said that I had been doing ‘tejer’ for over 50 years, and he found this amazing. It made me think that his grandmother is probably only a bit older than 75, and that he did not realize how young many women are when we learn these techniques.

So I tried to have a conversation with the woman doing crochet in the shop window. I asked her if ‘muy mujeres’ did crochet in Cuba, and she said yes! Most women do lots of ‘projects’ in their homes. I was quite enthralled to learn this. I took out my tatting-in-progress and asked her if this called ‘frivolite.’ Yes, it is. 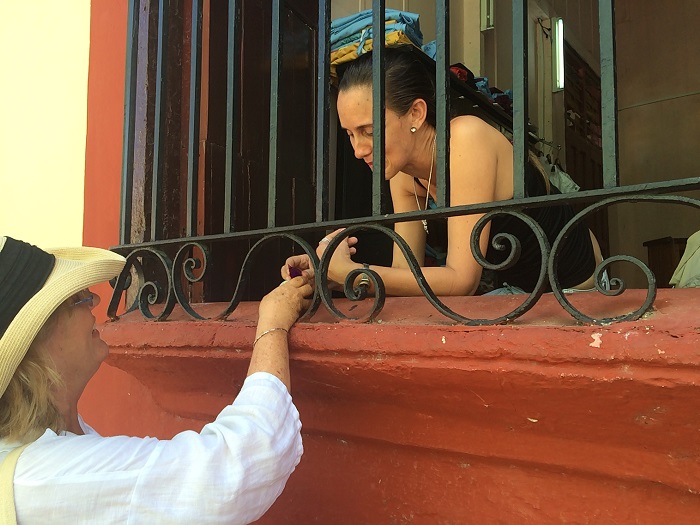 After a few more minutes of struggling to communicate, the crocheter called another woman over who spoke English very well. Her name is Noelise, and the crocheter’s name is Maria Estar, and they both work at a local school for textile handwork. I immediately thought of the lace school in Via de Conde, Portugal, and thought that I may have hit pay dirt here in Santiago de Cuba.

Noelis asked to see my tatting and said something like many women in Cuba want to learn this. I was not certain if that meant that no one knew how to do but want to learn, or if it is a popular thing to do. She said the handwork school was closed for the national holiday celebrating women, but that it would be open today. She has invited to come to see it this morning , so that is the focus of my day! She said she will wait for me at the location where I met her yesterday, and she’ll take me to the school. Her last words to me were, “I will wait for you tomorrow!” So charming!

So I don’t plan to dawdle this morning! I have a lot to learn!

This entry was posted in holiday, knitting, Lace, sailing, travel. Bookmark the permalink.