A Quiet Day Onboard

It’s anything but quiet outside today, which is exactly why I’m hiding down below.  We’ve had gale force winds since last night, and squalls bringing horizontal rain.  The wind in the palm trees is quite dramatic, reminiscent of Winslow Homer’s paintings of the Bahamas.  I don’t know how such tall skinny trees can withstand these winds. 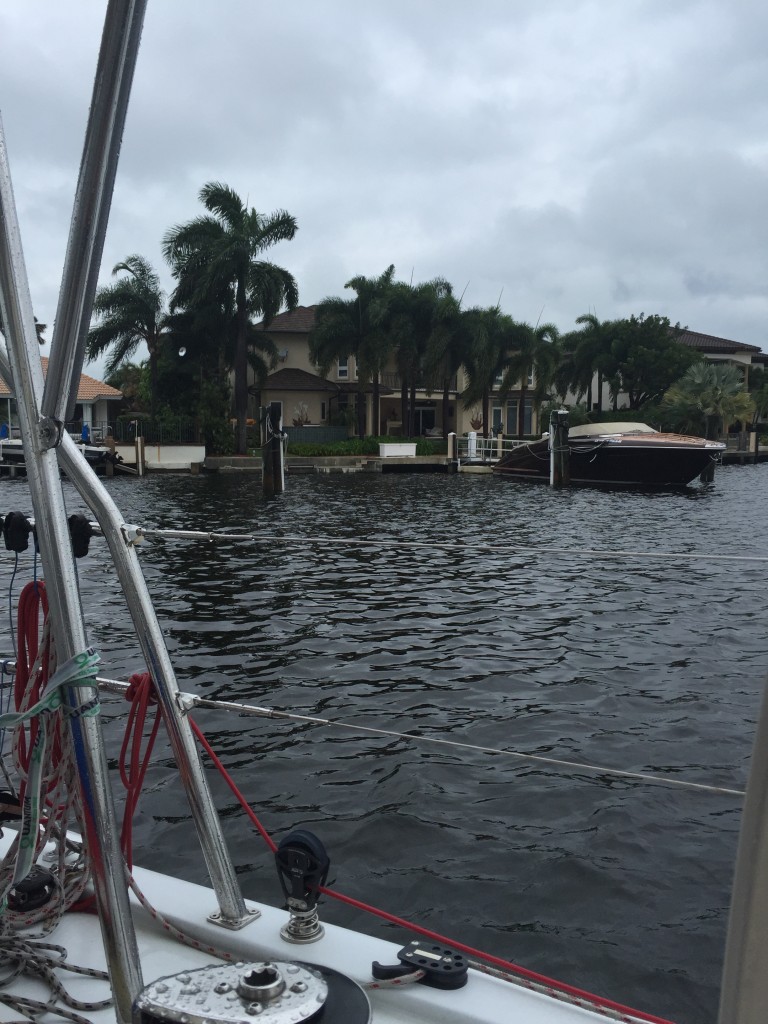 We are anchored in a little ‘teacup’ harbor called Middle River, in Ft. Lauderdale.  It is surrounded by elegant, Florida-style mansions, and each house has a dock with a large powerboat tied up to it.  There are too many of us cruising sailboats anchored in the middle of this little teacup, and when the winds are this strong no one feels safe.  All the boats are on the verge of tangling so no one got any sleep last night—perhaps Bob and me most of all since we dragged rather dramatically in the late evening.  It was odd because we’d already been here overnight with no incident.  This anchor has surprised us twice now so we did not sleep worrying about dragging yet again.  Anyway, no loss of life, and no damage to anyone—but until this front gets through here we will not feel safe.  If any of us should drag too far we will be tangled with the large mega yachts on the docks. 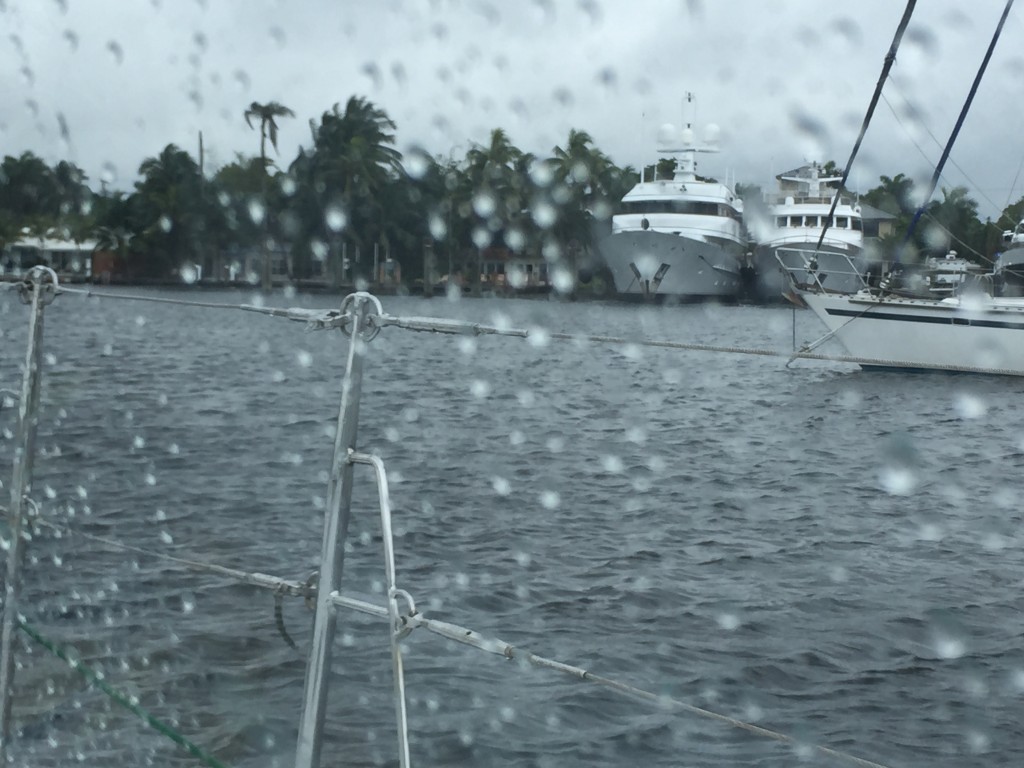 Knowing this dramatic weather was coming, I had planned to make the warp for my next tapestry today, but it’s a bit too uncomfortable in this much wind to attempt that.  It’s better for me to sit still, so I’m trying my hand–for about the 6th time–at tatting.  Tatting is such a simple technique!  It’s just making slipknots that slide along a loop, which gets closed to make a ring, or slipknots that slide along a straight cord that gets pulled tight to make a chain.  Rings and chains are all you need to know, along with a little embellishment called a picot.  A picot is a pair of slipknots that are not pulled tightly to the previous slipknots.  By leaving a small space between sets of slipknots you get decorative little picots when you pull the foundation ring or cord at the end of each ring or chain.

Making these little elements is still so awkward to me that it feels like some kind of hand torture!  I keep dropping the shuttle, and/or I keep turning the work the wrong way as I tat.  The little picots that occur throughout the rings and chains are not consistent–but I forge ahead.  I am going to attach this little bit of frivolity to a V-neck T-shirt I own.  I think it will be quite feminine, in spite of its irregularities. 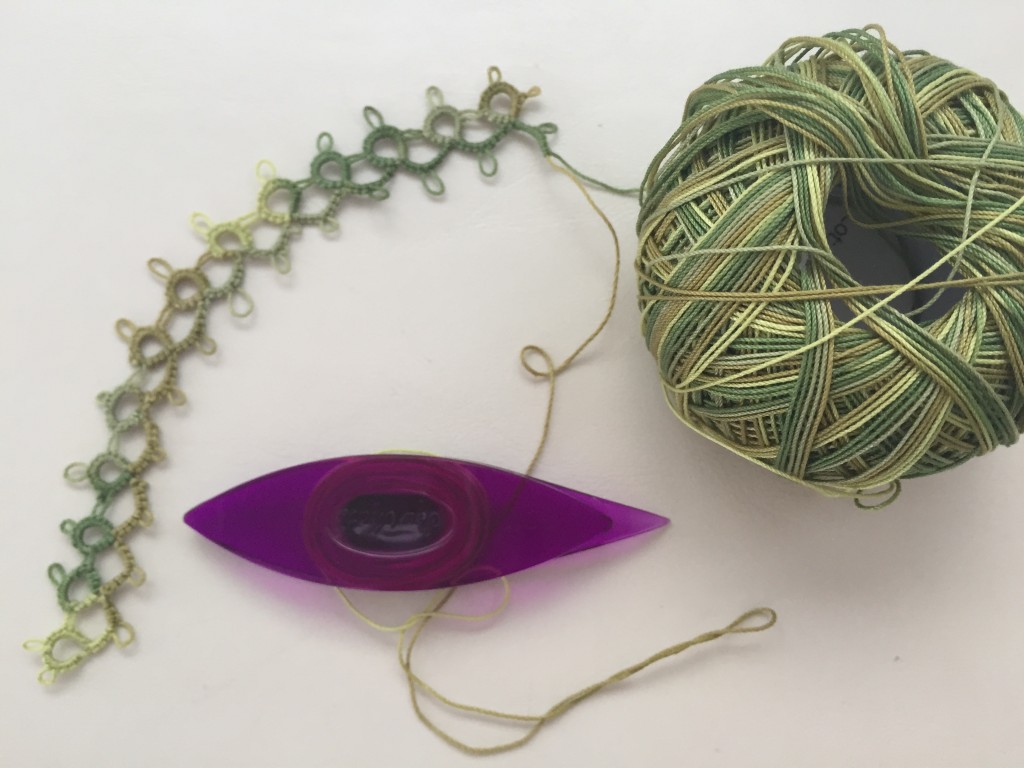 I have to thank my lace guru Mary for showing me the fundamentals of tatting (she’s not the first, but clearly the most successful at getting me to understand!), and I hope she will not take it as a slur against her teaching if she ever sees this pathetic little length of lace.  I just know that someday it’s going to feel natural to do this.  I have a memory of seeing my great aunts’ hands flashing back and forth as their tatting grew while I watched. Surely, it’s in my DNA somewhere.

And during the breaks I’ve been taking (to give my hands a rest and assuage my rising frustration) I’ve been reading The Paper Garden which is about an 18th c. artist who did not make her first truly original artwork until she was 72.

Today being my 60th birthday, this book is resonating with me.  Long before Mary Delany made her first unusually constructed botanical image that became known as the precursor to paper collage (she called what she made ‘mosaiks’), she had spent years painting in watercolors, drawing, and embroidering in cross stitch and other techniques.  She was also quite good at the piano.  She was no stranger to creativity.  She loved fashion and often designed her own gowns (made by others) before embellishing them herself with lavish floral embroidery.

I’m certain I’d feel quite connected to her even if I weren’t struggling with my novice attempt at tatting.  The fact that she surrounded herself and her home with beautiful things made by her own hand, and always had a garden wherever she lived, connects me to her with my own love of filling my home with handwoven and embroidered textiles, and having fresh flowers and greenery in the house from my gardens.  But since I am tatting, it’s that particular thing that makes me think of her every time I pick up the shuttle.  I’m embellishing a simple little t-shirt that I’ll wear on any given day—she embellished stunning 18th c. gowns that she wore on any given day.  What a difference three centuries makes….yet it still connects us.

This entry was posted in books, Lace. Bookmark the permalink.

2 Responses to A Quiet Day Onboard