So Much to Tell, So Little Time!

Unbelievably wondrous knitting and weaving things have occurred since my last post.  Now that I’m sitting here at my computer I don’t know where to start!  I guess I’ll just take a deep breath and tackle things one at a time…maybe this will end up being more than one post.

So, why don’t I start with today.  It’s fashion week in New York, and that is a guaranteed siren call for me to read the NYTimes.  Today was my lucky, lucky day because there was even an article about knitting:  “Grandma Never Knit Like This” is an article about Josh Bennett, who has a line of knitwear for men. He has designed knitwear for Tommy Hilfiger and Michael Bastion, and he has a pattern book of his designs published by Rowan and using their yarns.  In his Rowan designs, he designed sweaters that evoked the flavor of various New York neighborhoods.  This one is Hell’s Kitchen.

The article referenced SamuraiKnitter’s online brouhaha with Josh, so of course I had to check that out.  But really, who cares about that, when there is a world of fun on this site! What cave have I been living in??  Ms Samurai Knitter is the perfect anitidote to dearly missed You Knit What?  I could barely tear myself away, and had a good half hour of gut busting laughter reading the author’s insightful reviews of various issues of “Vogue Knitting.”  There’s nothing like  laughter to start a day!

And speaking of publications (as I think blogs are firmly in that category), earlier this summer I got to catch up on all the periodicals I missed while we were off sailing.  In this year’s issue #1 of “Vav Magazinet,” which was entirely devoted to the color white, I read quite a moving article by Birgitta Nortstrom.  Ms. Nordstrom is Senior Lecturer in Textile Art at University of Gothenburg, Sweden, where she received a grant to design baby blankets, with an outside layer  that would be a visually pleasing weave structure and the inside layer would be fulled to create the softest fabric to touch a newborn’s skin.

This alone would be such a beautiful idea for a project, but her idea went further.  Hang on to your hat…..  these blankets would be available at hospitals to be given to mothers whose newborns did not survive birth.  These blankets would actually be shrouds.

The moment I finished reading the article I wrote an email to Ms. Nordstrom, telling her how moving I found her project and that this project that should be done everywhere.  I asked if she might consider writing a book about the blankets.  It was late July before I heard back from her (she was away in the remote north for a holiday), and it turns out she did write a booklet as part of the process.  She asked for my address so she could send me one.

So now I feel quite driven to do something with this marvellous idea.  Anyone want to join me? Stay tuned….

Here is Birgitta’s description of her project:

Is it possible, by making shrouds for the smallest, to ask questions of grief, touch, and the wrapping of bodies?

Weaving, inch by inch, has been practiced for thousands of years.  Out of both need and desire.  It is a patient process, repetitive and deceptively simple.  In the end the weaver’s patience is rewarded, producing fabrics far greater than their humble beginnings.

We have aimed to weave a series of blankets that are soft, shimmering, unique, and quite simply the most beautiful blankets we could imagine.  In the process we have asked ourselves and others about the need for ritual and meaning.

Can a small, exquisite blanket be a language of touch?  Can it say something where words fail amidst the grief of the loss of a child?

Humianity has often understood both life and death through metaphors and references to textiles.  Through history and myths they have helped us understand and navigate these moments.  They anchor us, as threads, to both joyous and difficult times.  We have chosen to follow these threads.

I think I’ll stop here, except to include a bit of our lovely Connecticut River scenery.  I know this post has been a bit weird, going from snarky knitting reviews that had me rolling, to the subject of grief and loss…. well, maybe I’m thinking of summer turning to autumn….There are only 10 days left in summer, but since school has started, and since it’s past Labor Day, most people think it is already fall. 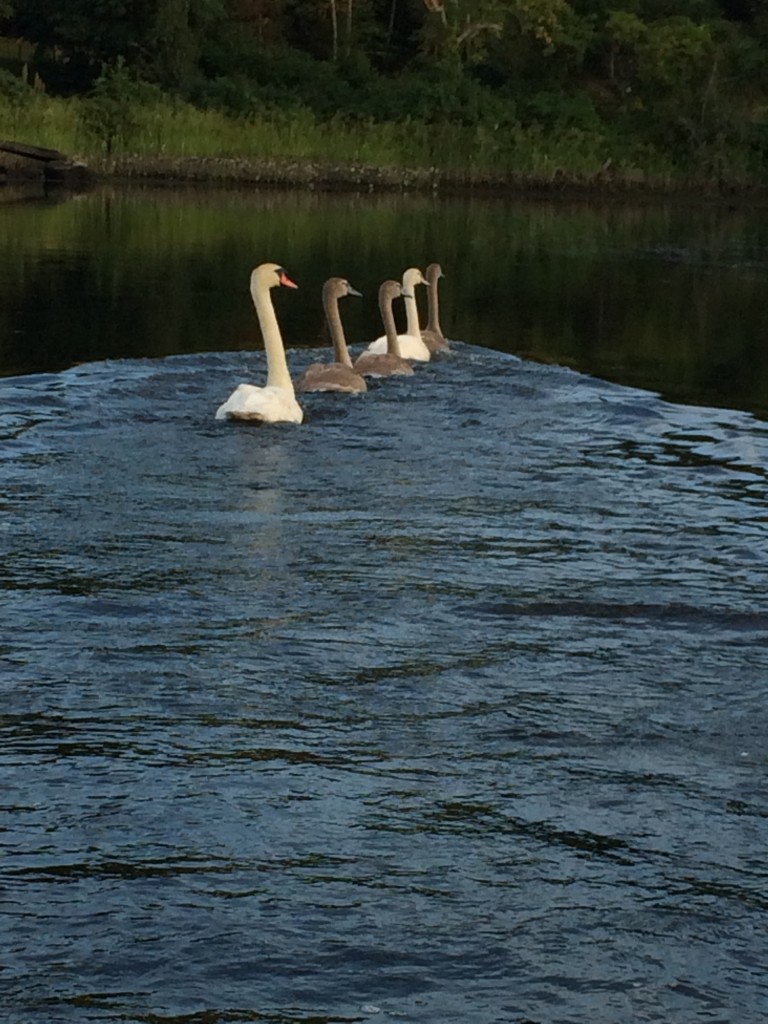 Yesterday evening, Bob and I took a dinghy ride up one of the estuaries near where we live on the Conneticut River.  It’s a narrow and winding stream with water hyacinth and tall grasses on both sides.  The grasses were full of red winged blackbirds that all took flight as we passed.  This swan family opted not to fly away….maybe the younger ones aren’t good flyers yet.  So their tensions were mounting as we all headed up this little estuary.  In the end the mother and cygnets turned a corner too shallow for our dinghy, but not before the father tried some diversionary tactics to lure us away from his family. 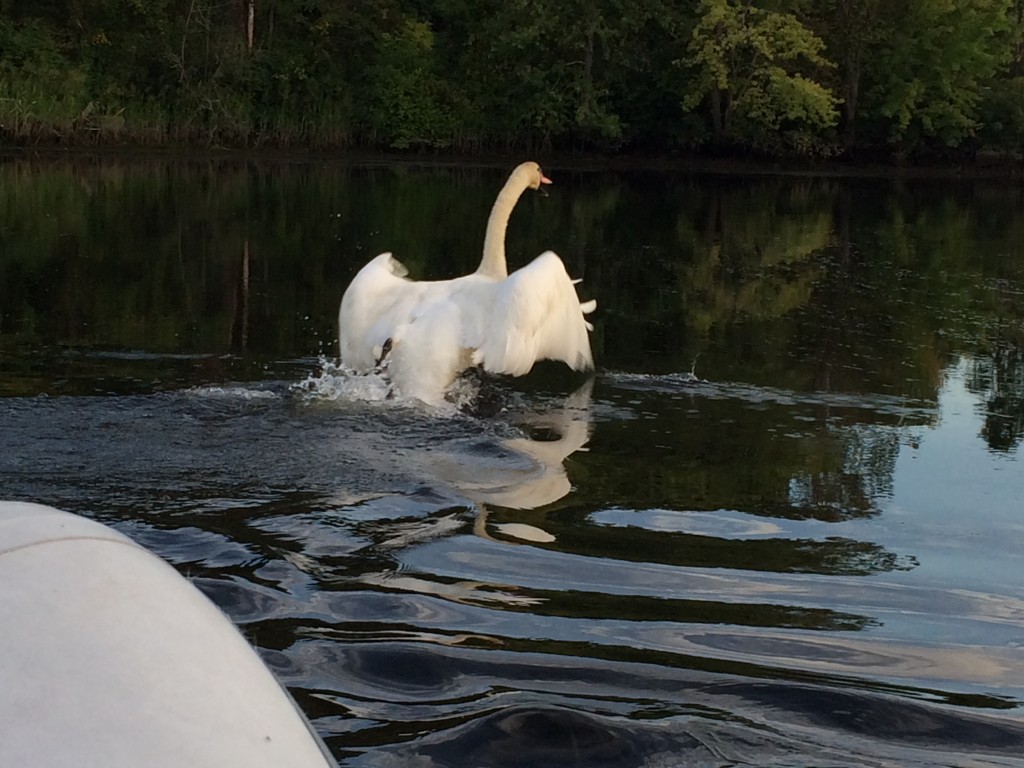 And didn’t it become obvious to me that we are all more similar than not.  The family made a phalanx as best they could to protect the cygnets, and when that failed the father tried to draw us away.

Along with the swans and the red winged blackbirds, we saw a great blue heron fly low and slow right above us to land at the edge of the marsh grasses.  It was a beautiful evening.  It’s almost time for our boat to head to warmer waters, so it will be another spring and summer before we see sights like these again.