Yesterday there was a lovely event at a local historic farm in Old Saybrook.  It was a wonderful way for me to celebrate being home and to enjoy the glories of spring!

The house at Bushnell Farm was built in 1678, and is the third oldest house in Connecticut (now I want to find the two older homes!).  Isn’t it a beauty?

It is privately owned by a couple who live in my town, and they are doing a fantastic job of maintaining this property as well as continually bringing various areas of the farm back to the conditions of its early history.

Several times a year they open the property to the public free of charge.  The spring opening celebrates the farm’s production of textiles which was such a vital part of life at that time.

One of the barns has a large loom in it dressed with linen toweling.  There are a number of flax wheels, lots of tools for spinning and weaving, along with all the other tools and equipment that would be in use on a farm of this age.  The Clarks have done a stellar job of collecting the daily items that would be in use on this farm.

For yesterday’s event the Clarks had arranged for two spinners from New Hampshire to come demonstrate at the farm.  The first demonstration was on processing flax into linen, and it was the main event for me.

Gina Gerhard does 18th century textile demonstrations throughout New England and she certainly knows a great deal about growing flax, harvesting it and processing it for spinning into beautiful line linen.  While I know the various stages of preparing flax stalks for spinning, I had never seen the entire process done live, right before me!  Gina made it look easy, but she has had a lot of experience, and she was only processing one bundle for us. I’m sure an entire harvest would be a huge undertaking.

Amazingly, she grows her own flax, starting with about 5 lbs. of flax seed.  In her area of New Hampshire an historic flax pond has been identified, and she hopes to use it in the future to rett (or rot) her flax bundles.  At the moment she uses a large outdoor tub to rett her flax, and it takes about 4 to 6 weeks.  Having a pond that can be dammed with shallow, still water with a bed of stones at the bottom gets the job done much faster, perhaps only 4 to 5 days if things are perfect.

Here is Gina holding one of her flax bundles.  First the bundles were dried and then retted and then dried again.  In her northern climate she harvests the flax in late Sept or Oct.  Since that is not a great time for beginning the retting (rotting, and it does get stinky as it rots!) process, she lets the bundles dry over the winter and begins the retting process when the weather gets warm, like now! 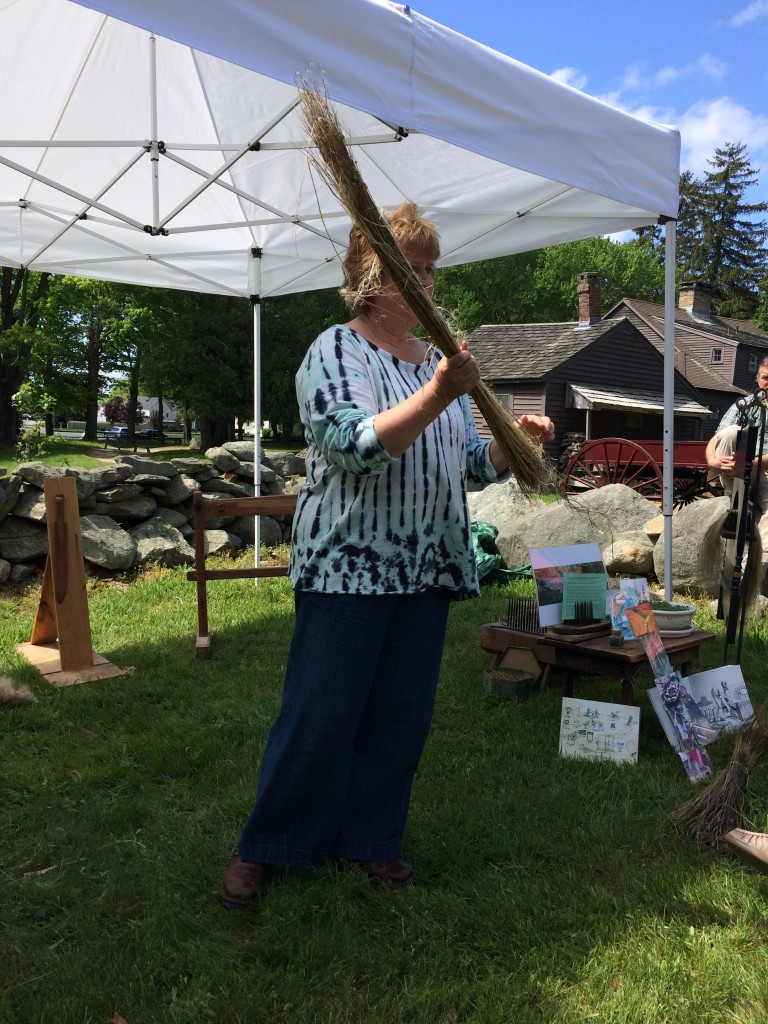 The first step in preparing flax for spinning is breaking the flax stalks, which removes the outer and inner harder ‘straw’ that protects the fibers. 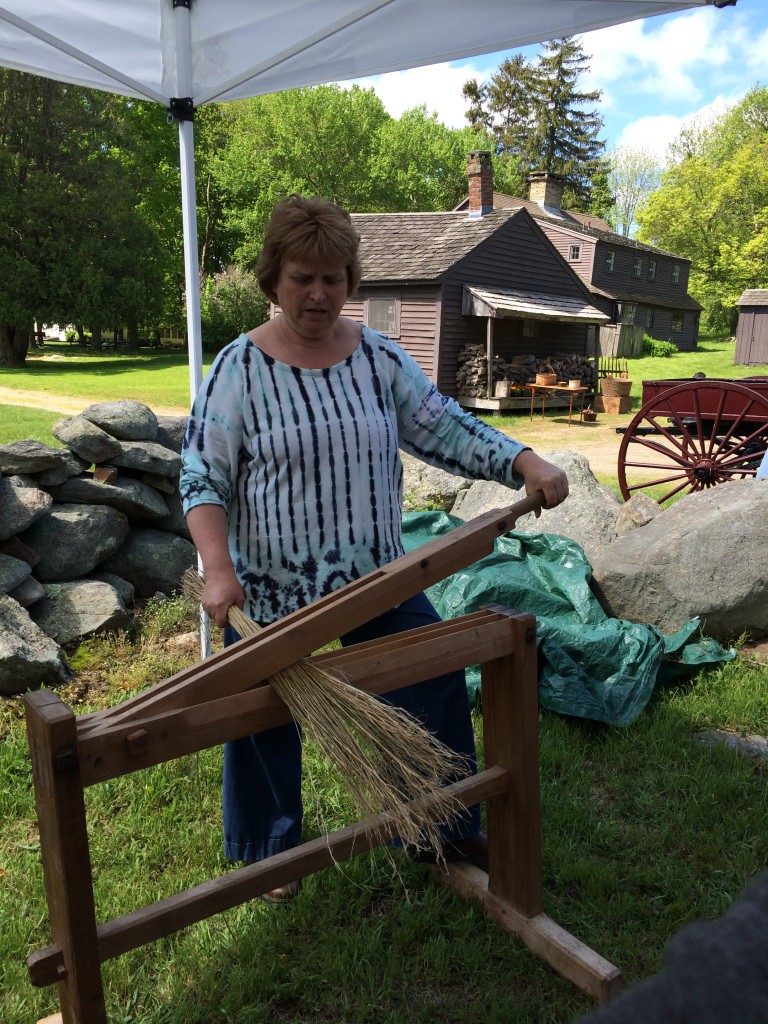 The next step is scutching which also removes more of the tough casings that protect the flax fibers within.  Gina is standing next to a scutching board with her wooden scutching knife.  The technique is to lay the bundle against the board and beat the bundle in a downward motion with the knife.  It is a motion of beating and scraping down the stalks.  She mentioned how often she sees these tools mislabeled in antique shops.  She said the scutching knife is often labeled a toy sword! 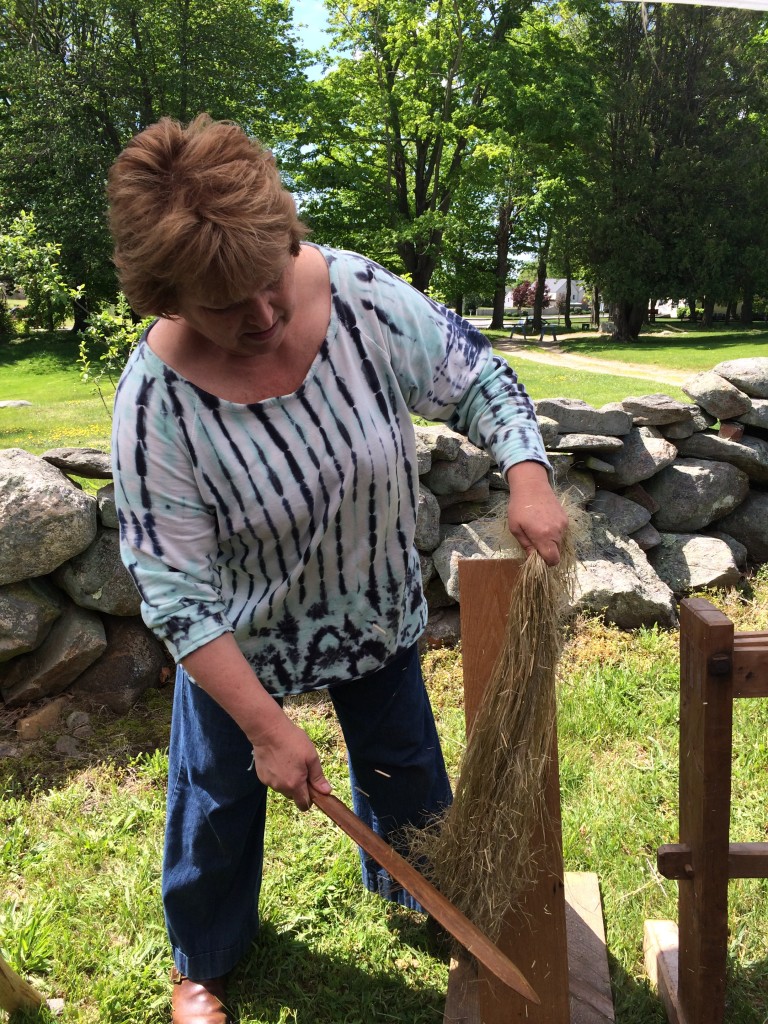 Then she moved on to her hackle stand, a saw horse with three hackles attached to it (with bench dogs, my first exposure to these marvelous tools.  Why has the modern world switched to C-clamps when bench dogs are so much faster to use and so much prettier too?).  The first time I saw hackles I understood our phrase “getting one’s hackles up!”   Sometimes an image is worth more than a thousand words!

This photo shows Gina’s three hackles (all up!), getting finer as she progresses through the hackling.  Aren’t her bench dogs great??  I talked to the blacksmith in one of the nearby barns about getting a set. 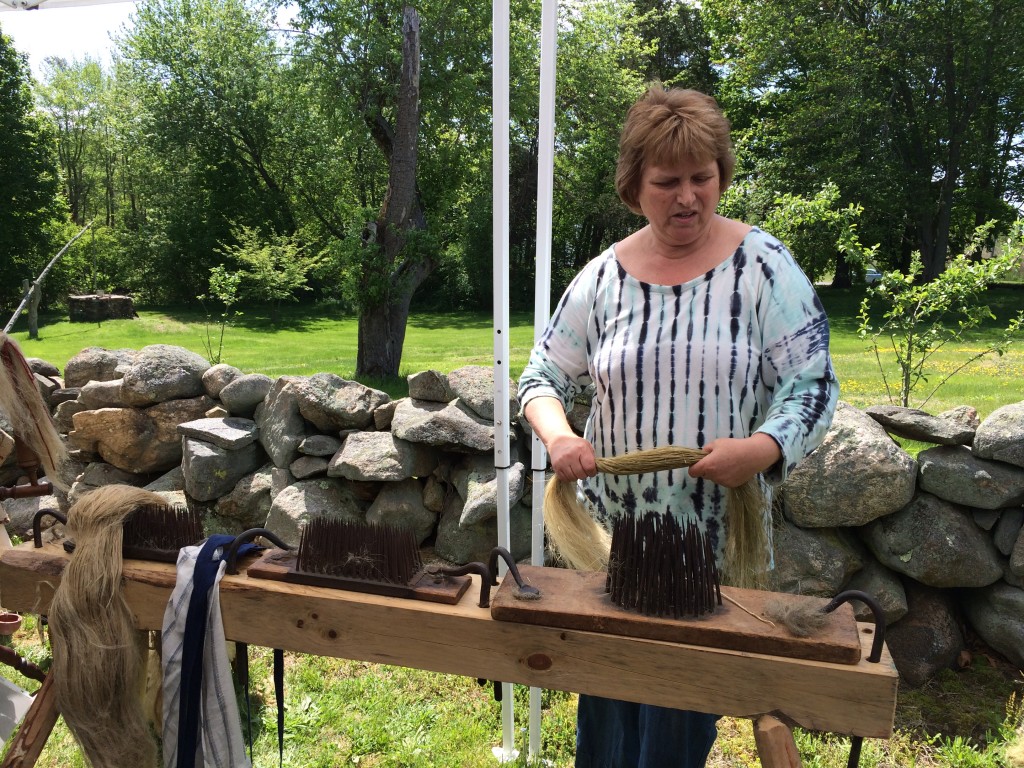 When Gina was done hackling, she had a beautiful linen strick to spin.  She could twist it into a bundle and continue processing other flax bundles, or she could put the the strick on her distraff and begin to spin. The great take away lesson for me during this demonstration came now, dressing the distaff.  I have never understood how to dress the ‘birdcage distaff’ that we see all the time.  It just seems to me that after preparing this perfectly combed strick of linen putting it around the birdcage just gets too many of the fibers out of alignment.  Then spinning only messes up the aligment further.  Well, clearly I don’t understand it because it is the traditional way of preparing  flax to spin.  Luckily there are other traditions, and Gina uses a straight distaff on which she ties her strick so that it stays in a straight bundle.

Here are the two distaffs:  birdcage on the left, straight on the right

Here you can see how she has tied her strick to her simple distaff and is preparing to spin by pulling out just a few fibers. 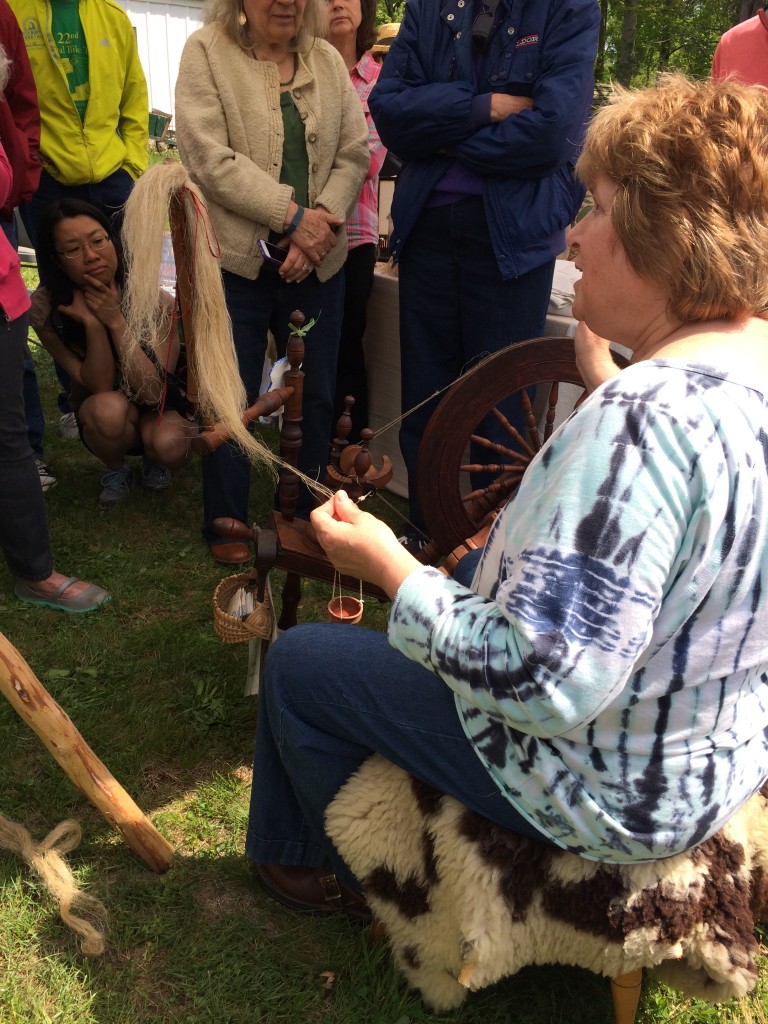 Gina describes her flax as good quality (and that is easy to see!), but not as fine as the linen grown in Belgium or northern France.  She says farmers there have mastered what is necessary for producing the finest flax fibers, which includes sighting the flax field in a very sheltered place, safe from wind.  Flax plants have very shallow roots and the plants can get knocked down by wind or driving rains.  Once they are down they cannot be staked up again.  In general, in northern Europe, summer weather is mild and rains are not violent in the way that our summer thunderstorms in New England can be!

Gina spins a yarn that would make a wonderful heavy weight smooth linen fabric.  You can see just how few fibers she draws in to her yarn. 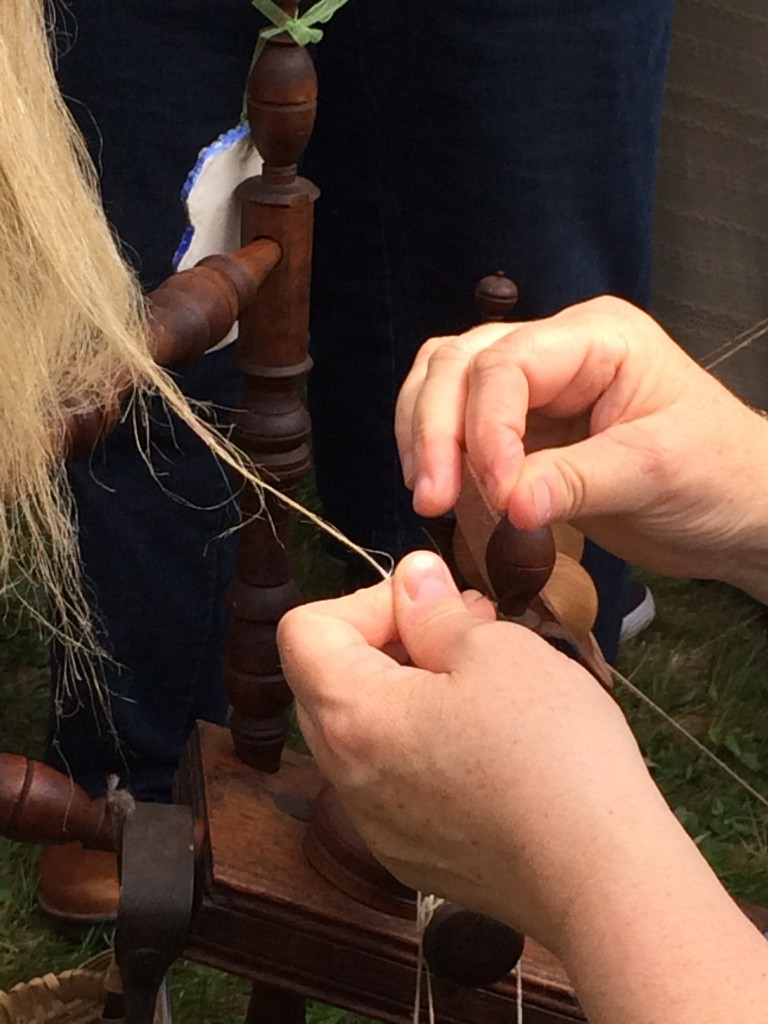 Along with her demonstration she had a lovely display of linen items.  It was such a treat to see her working, to see her display and to get to know her.  I hope our paths cross again!

Linen socks!  I’m not sure I believe these are handknit! 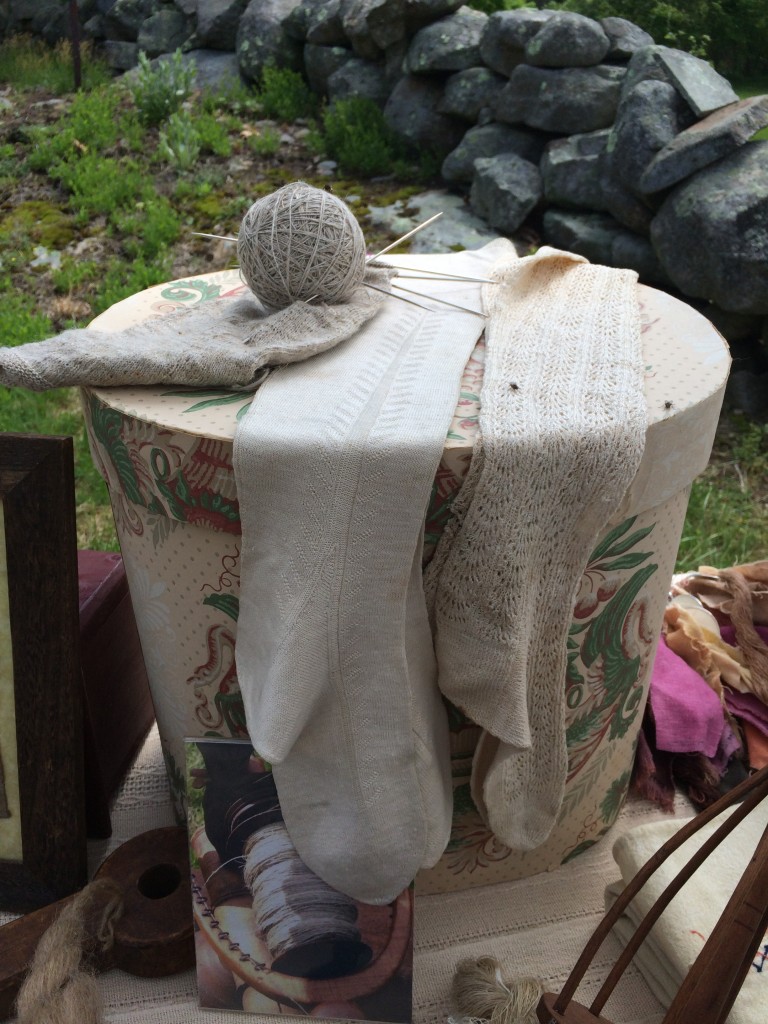 And a close up of each of these beauties!  First, feather and fan (okay, close up I can believe this was handknit): 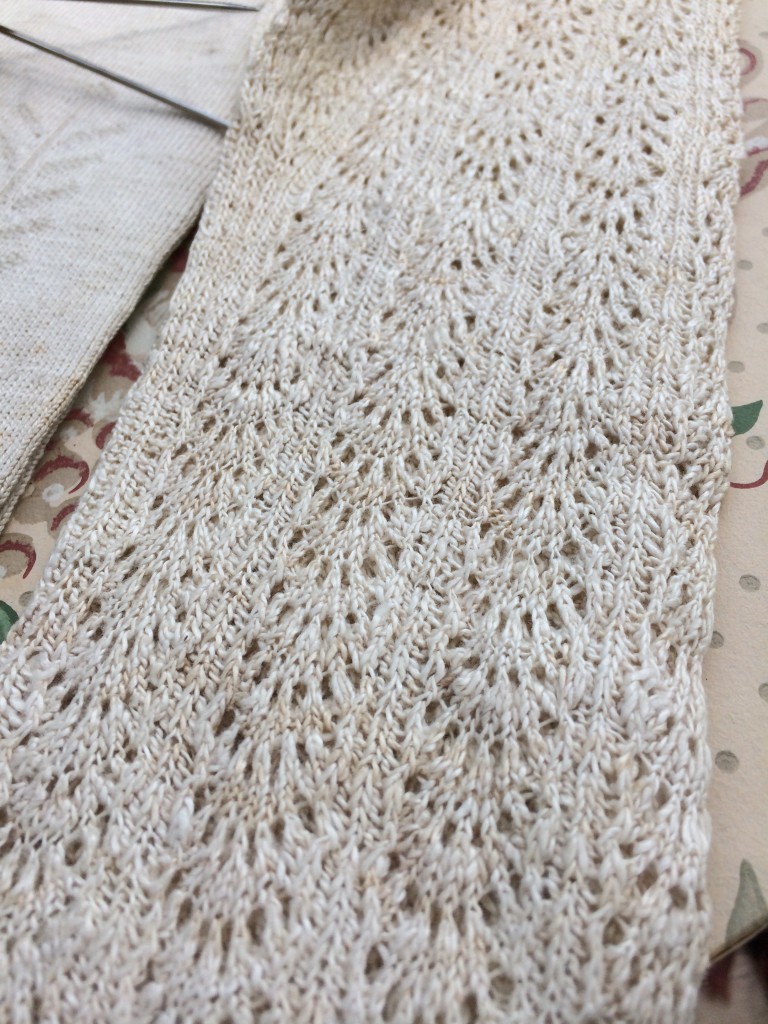 …but not this one! Boy, I would love to try these on! 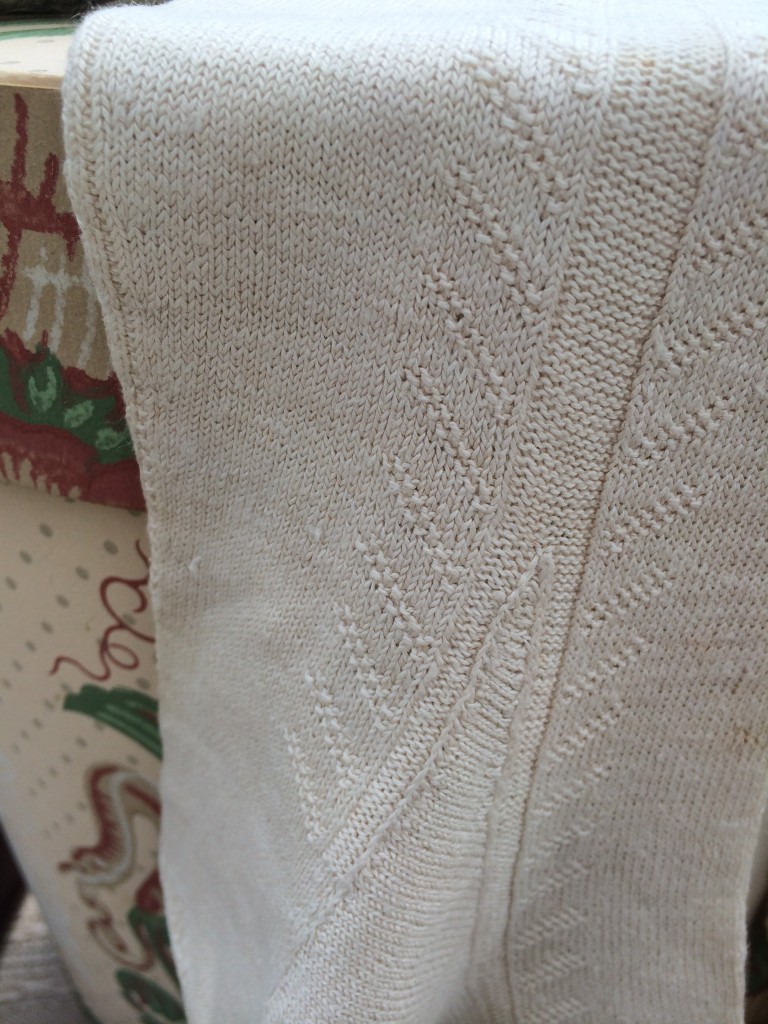 She had a plenty of linen fabrics to see and touch to show the difference in fineness and color.  In the stack of three fabrics at the top of this photo, you can see a set of very fine, bleached linen handkerchiefs, followed by quite a coarse fabric woven of  linen singles (perhaps tow linen), and last a heavy weight fabric of line linen which I believe is very similar to what Gina was spinning for us during her demonstration. 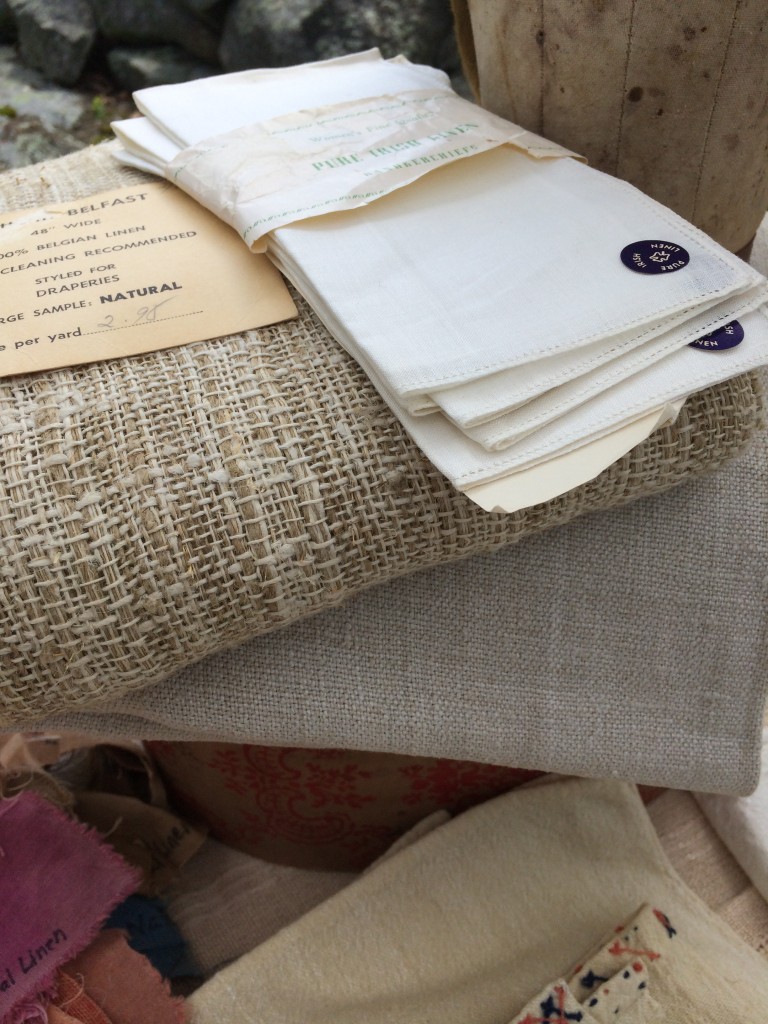 At the very bottom of this photo you can just see a bit of embroidery and the folded part of the fabric behind the embroidered edge.  This fabric was wonderfully soft to the touch;  it is a length of antique linsey woolsey.  Wow!

So, that was the highlight of my visit!  And of my Memorial Day weekend.  I just want to get back to my linen spinning project!  Gina has given me some great ideas on how to improve, and I’d like to get to it!

Meanwhile, other things were going on on the farm.  Wool preparation and spinning, horsedrawn wagon rides, sheep shearing.  Most of the out buildings on the propery were open.  One of them has been set up as a general store, which is not original to the farm, but makes an intriguing display of 18th century items that the owners have collected.

Some of my fellow guild members were on hand demonstrating and showing their wares.  It was great to catch up with them and watch them talk to onlookers.  There was a great turn out for this event.

The sheep shearing was almost as thrilling as the flax demonstration.   Certainly it was very thrilling for the sheep….they did their best to avoid it. The shearer was a woman, of very slight build, and rather young it seemed to me.  She handled herself with such confidence, the sheep never gave her a moment’s trouble once she corralled each one.  She sheared all the sheep, but I only documented the first one.  She never made a knick on the sheep, and the two year old ewe was perfectly calm.  Who wouldn’t love a face like this? 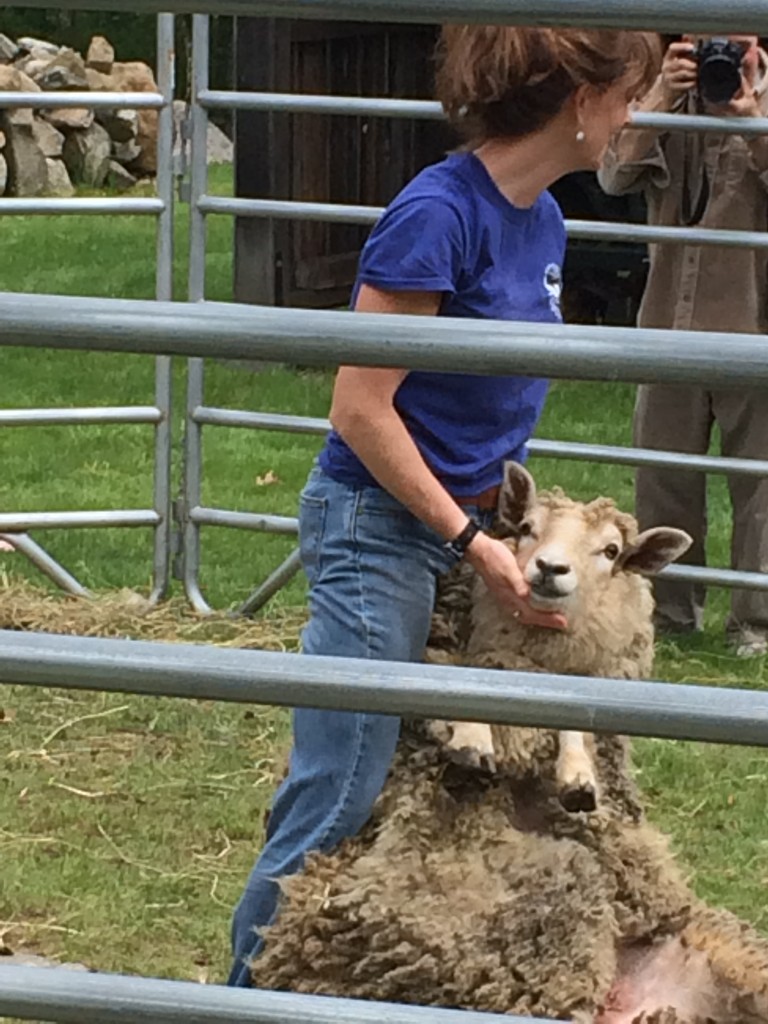 And so the shearing begins…. 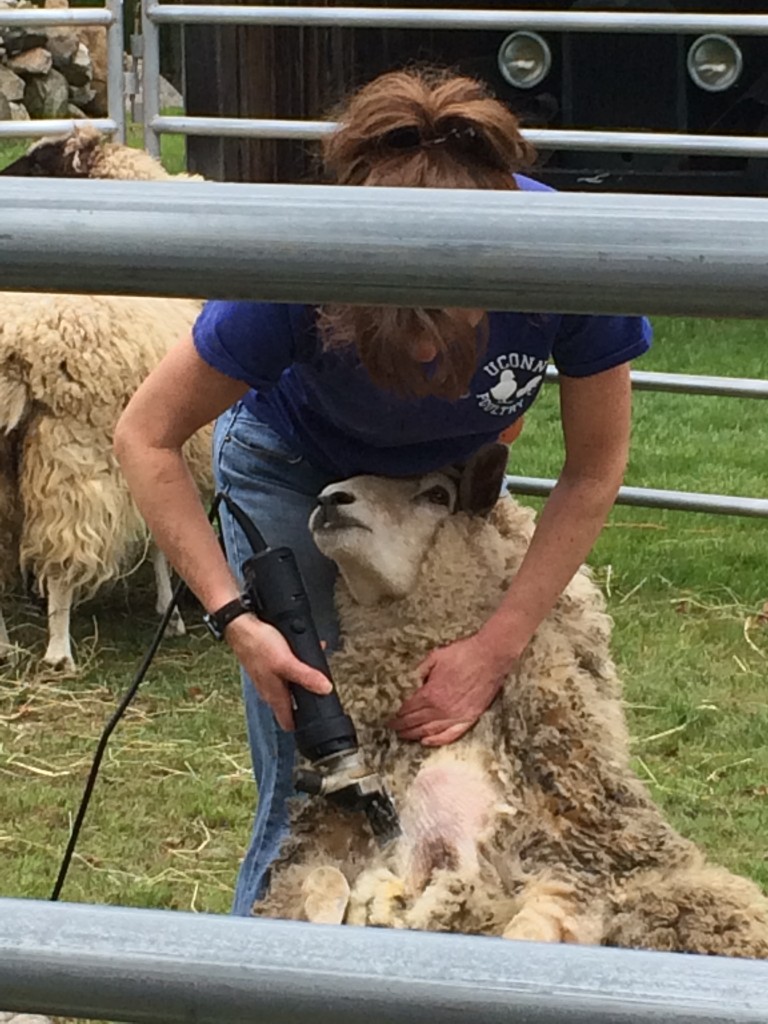 Moments into the shearing I realized I was watching a master, so I had to tape it!

Now it’s Sunday morning and I am full of ideas and inspiration from my day on the farm…. although I want to spin some flax, I am partway through making that colorful warp for yardage for the napkin and lunchbag fabric that is due at next month’s guild meeting.  I’d better stick  to that today!

It’s nice to have enthusiasm for so many fun textile projects!  See you later, hopefully with photos of my finished warp!

This entry was posted in inspiration, spinning, weaving. Bookmark the permalink.