The word journey has been foremost in my mind for months now…. my father in law’s major journey (his life) has just ended.  He led a beautiful life, and he was as much a father to me as he was to his three biological children.  He was a great man in all the best ways possible…. devoted to his wife, his children, and a consumate volunteer which means he was devoted to all the causes he he championed.

Lately my own journey seems fraut with anxiety, too many deadlines, too many places to be in such a short time.  I feel like I’ve just returned from our long journey down the Eastern seaboard of the US and across to the Bahamas, and now we are to leave again in just a couple of weeks.  Where has the time gone?

Well, mostly we’ve been spending some very special time with Bob’s father.  It hurts to know you are losing someone, but in the long run I feel it has been a gift to help Bob, Sr. through the last months and a gift that we could be with him as much as possible for our own needs…. I think this is far better than losing someone you love without any warning at all.

During this last summer/fall/winter of my father in law’s journey I’ve been thinking about the Moirae, whose names are Clotho (the spinner), Lachesis (the measurer), and Atropos (the one who holds the scissors and cuts the thread of life).

I love Sarah Swett’s rendition of these fates “The River Wyrd.”  She has done a great job portraying them having a laugh at our small lives, our loves, our passions. At this moment in the grieving process, I’m much too bogged down in the sadness of missing him, and wonderful memories, and nostalgia and schmaltz…. to treat this subject with humor.  And I am searching for a way to find voice for the respect and love I have for my father in law’s life.

So I’ve been rather focused on images of the thread of life.   My father in law, the original “Bob” in the Osborn family, had a wonderfully long life, although not nearly long enough for all of us who loved him.  He was connected to many people, a life long best friend with his brother who died just weeks ahead of him, and a life long friend of a surprising number of others.  How many people do any of us know who can get together regularly with friends they’ve known since before a marriage of 60 years?

Anyway…. my own recent journey has been in trying to depict images of a beautiful, long life.  I’m not there yet, but impatience led me to attempt a less than fully developed idea, with a technique I learned a couple of decades ago from Betty Vera and revisited this summer with Sarah Saulson.

The technique involves dressing a loom with a warp, then pulling out the warp onto a flat surface, under tension, and painting the warp with dyes thickened with printers’ paste, or  sodium alginate.  Here are some photos of my first attempt at this.

My warp is silk crepe which I wound onto two spools for easier handling. 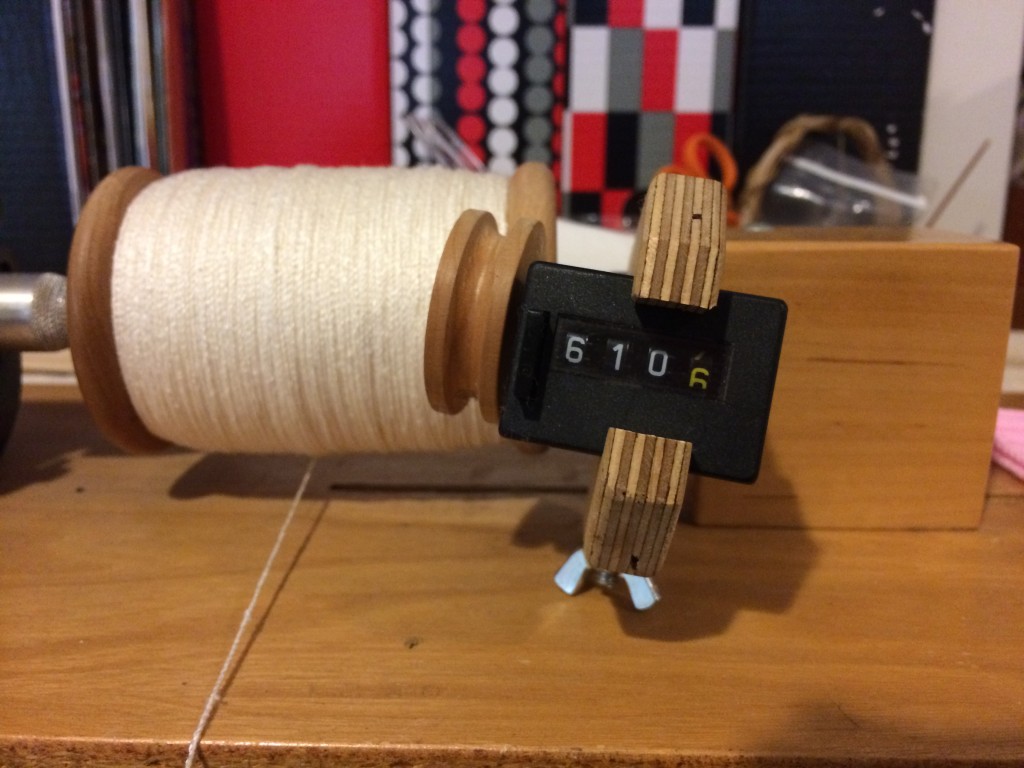 I made a stencil of my design on a manilla folder. 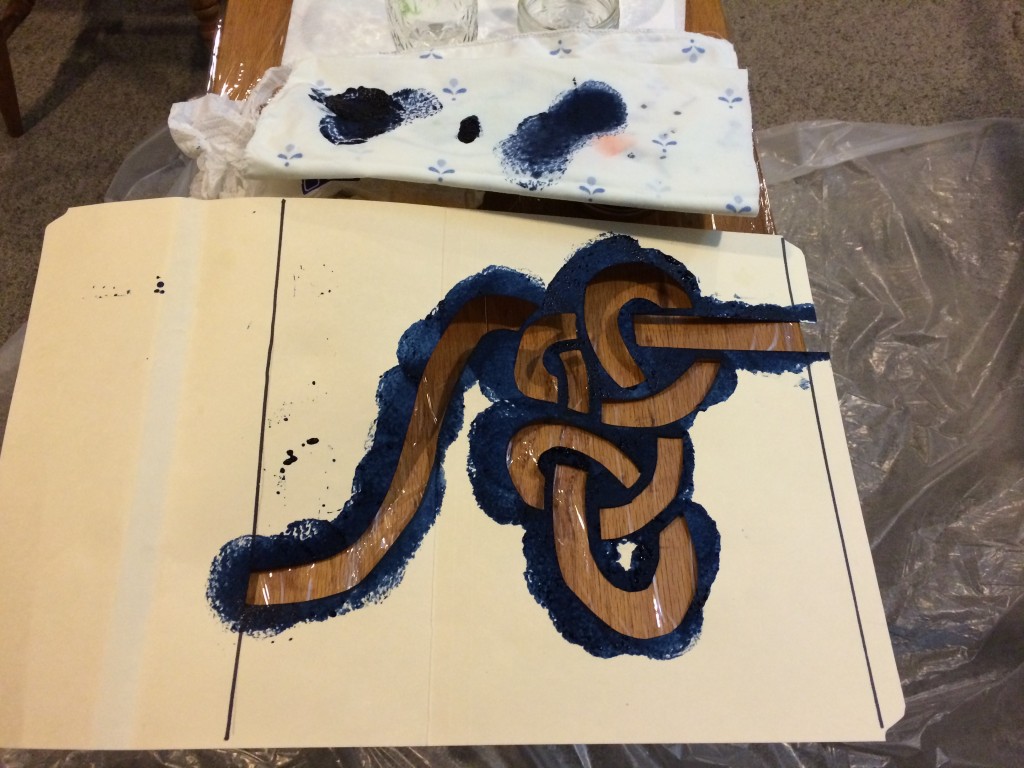 Here is the warp after painting.  The dye is ProChem blue #402 mixed for full saturation with a little “New Black” added.  You can see the stencil brush I used in the lower left.  It is a wonderful tool that I found at Long Ridge Farm’s booth at Rhinebeck one year.  It is made of very tightly packed natural bristles, but I don’t know anything else about it since the attached tag is in Japanese, and Nancy Zeller did not have the information on her when I bought it.

The dye required four hours to set with moisture at a temperature of 70 degrees F.  After that the plastic film is removed to allow the warp to dry before being wound back on to the loom. 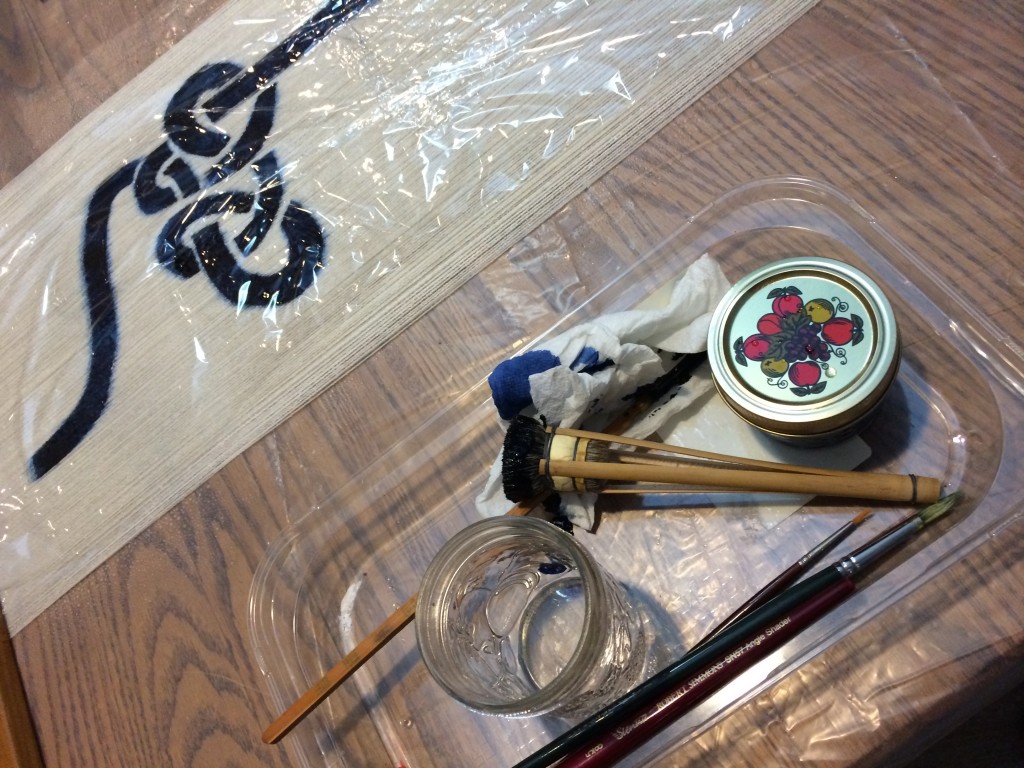 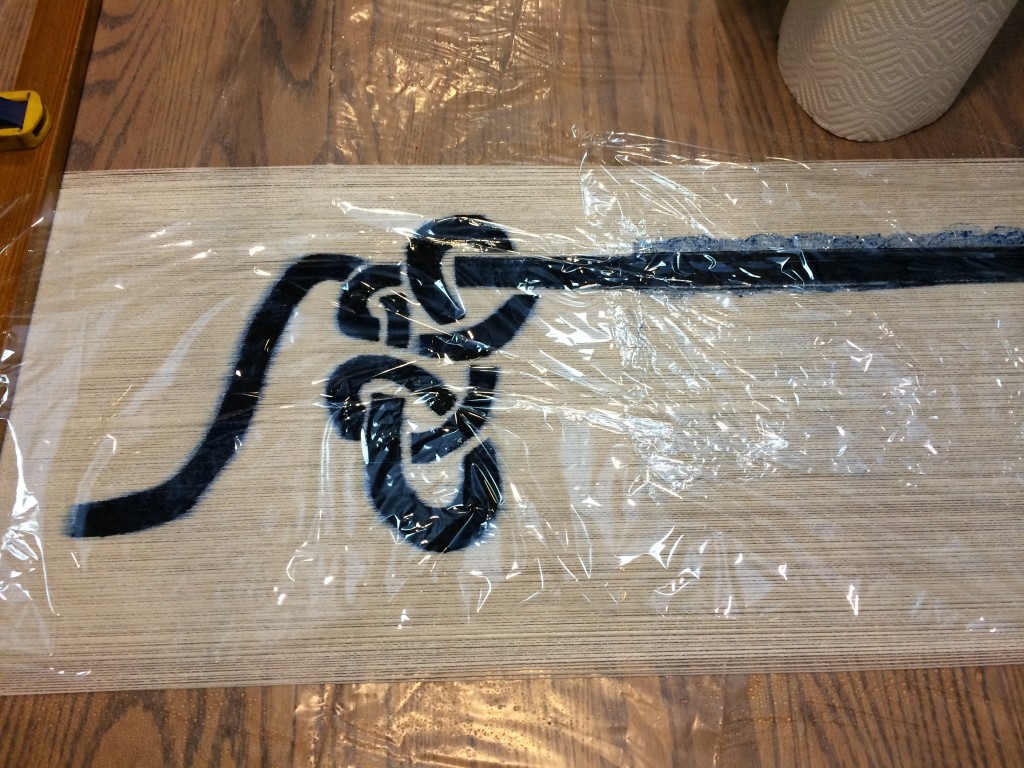 In my haste to work on this project (I had envisioned this piece hanging from the lectern during Bob, Sr’s. funeral…pipe dream!) I did not take any photographs of the weaving process.  My 8 shaft Baby Wolf was threaded with an undulating twill, and I used a natural colored, smoothly spun silk thread for the weft.  I think both warp and weft are in the range of 20/2 silk, but neither of these silks, in my stash for decades, were labeled.  I threaded the undulating twill at 30 ends per inch. The seredipitous surprise after weaving and wet finishing was the amazing sheen of the silk crepe!  It glows.

Here is the finished piece.  It shifted more than I expected when I wound it back on to the loom, which is when I discovered that some of the heddles were not oriented properly on the shafts.  A number of heddles were upside down, and I think this opposite orientation caused a bit more drag on the threads which resulted in significant shifting.  I tried repositioning these threads by adding a bar at the back of the loom with these threads pulled around it….but as you can see from my photo, it did not help.

This is not what I had envisioned for the finished piece, but I am not unhappy with it!  Yesterday I made a new warp (and used up all the rest of my silk crepe!) and dressed the loom so that I will probably be ready to paint again tomorrow. 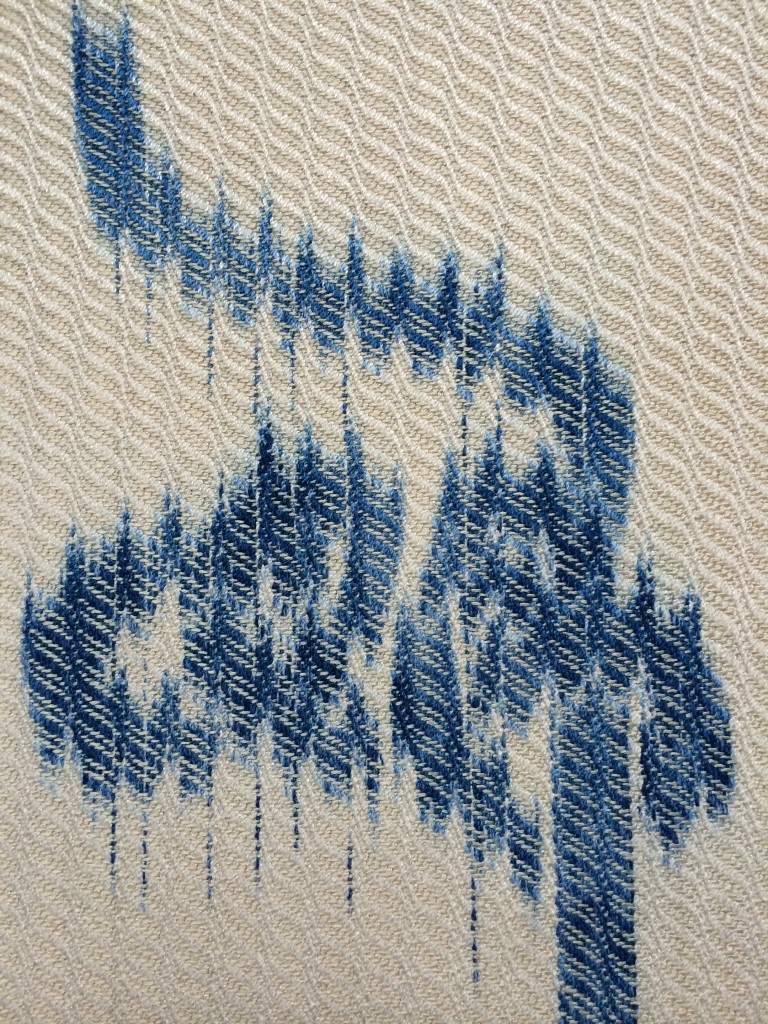 This entry was posted in dyeing, family, weaving. Bookmark the permalink.