The recipe for a perfect day:
Warm Sun
Gentle Breeze
Coffee
Knitting
A place to recline while enjoying all of the above….

It just doesn’t get any better!  Today feels like June in New England.  It is quite reminiscent of rare, lazy mornings on the front porch in either my old house in New Jersey, or my new Connecticut house.  I could become a little homesick, but I’ll just remind myself that it’s December and there is no sitting on porches there right now!

I haven’t mentioned the “Ann Jacket” in about a week, have I?  Well, it couldn’t be going any slower ….. it’s like I just learned how to knit yesterday!  It took me over a week to knit one sleeve, and it was some of the most frustrating knitting.

In the end it comes down to having good tools.  I’ve always known that.  But in this case I didn’t plan ahead to make sure I’d have the best tools on hand.  My options were to knit the sleeve flat, and this would have been my fastest option since I had the perfect needles for doing that….the very needles I used for the entire sweater.  But I didn’t want to sew at the end of project, especially this project which was so cleverly designed with no sewing.  I opted to pick up stitches around the armscye and knit circularly.

Now you know where I’m going with this…  I either have to use double points, two circulars, or one long circular as a magic loop.  I tried the double points first since I have them.  Ugh.  With the entire weight of the sweater hanging on those small double points (no matter how carefully I tried to keep the weight of the sweater balanced in my lap) at least one of those needles was always falling out.  Big time burner, constantly picking up the stitches from the needles that wouldn’t stay in the knitting!

Next big idea:  two circulars.  Maybe this is being a tad particular, but I find it quite frustrating to zip along on my best needle and then have to  s-l-o-w  d-o-w-n for the second half of the row on the less than best needle.  Ugh.  I gave that a go for quite a while before deciding that I was just getting too angry.  I can’t let knitting make me angry!

Third attempt: magic loop.  Well, this works best with a really long circular needle.  My favorite fast #3 circular is only 24″ long.  I had a lot of stitches on that needle, and there was just barely enough cable left to force that magic loop.  More frustration and a bit more angry knitting.  Not acceptable.

Compromise: I went back to two needles and finished the first sleeve this way.  More than a week for one sleeve!  Sheesh!  I knit an entire body panel in multiple colors and multiple directions faster than one simple sleeve.  Maybe I should have worked flat and sewn….

So yesterday I visited the Knit and Stitch in Cocoa (and it was as good as promised!) to buy myself a better second needle, hoping there wouldn’t be such a disparity in speed and ease between them.  Everyone swears by Addi Turbos as being the fastest needles, and I do have a small battalion of them in my stash.  But there’s another brand of needles that I bought decades ago at Patternworks, when they were in Poughkeepsie, and I love them more.  They are some kind of “plastic” covered metal, in a stone grey color, and they had a German name.  I love them.

So now I’m only slightly limping along between my fast needle and my new Addi Turbo.  I’m sure I’ll have a warm sweater jacket to wear home next week!  But I won’t be very far along at all on my ruffled cardigan.  I guess I will bring it along to knit on the plane! 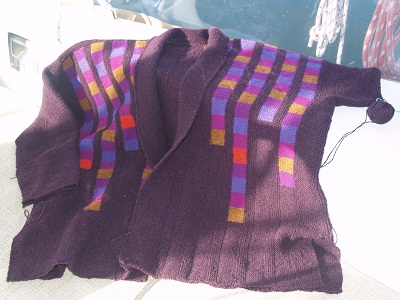 Knit and Stitch is a great store.  It was Monday afternoon, and there was a crowd of women sitting at the central table, working on different projects.  Two employees were sitting helping the knitters, one more was behind the counter helping me.  There was lots of lively conversation and friendly atmosphere.  The shelves were full to brimming with yarns, although it was hard to get to some of them due to all the knitters!  Not a bad thing!  And true to their website, there is coffee, tea, chocolate, and wine! It wasn’t long before the woman behind the counter offered for me to sit down and get to my knitting while she poured me coffee…or wine, and “please help yourself to some chocolate.”  I might go back there today and indulge!

I bought the pattern and background yarn for this fun project! It requires lots of small bits of contrasting yarns, and I figure I have plenty of that. The yarn I bought is Noro’s cotton/wool/silk/nylon called “Taiyo Sock Yarn.” Check out Knitting At Noon Designs. 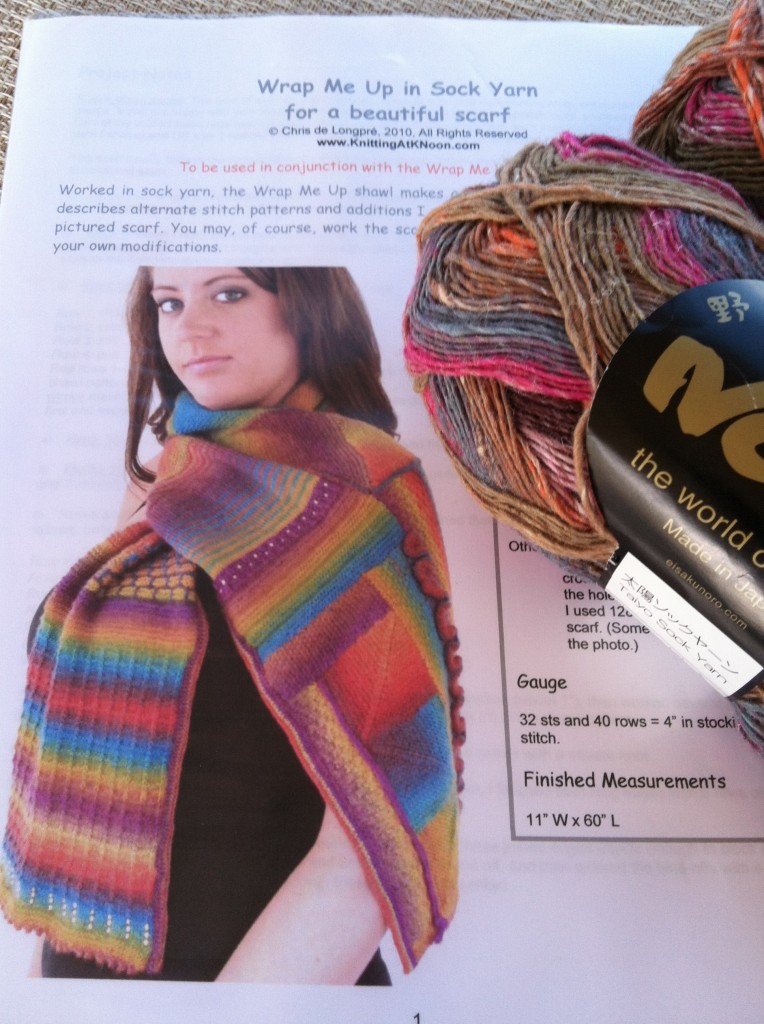 So I haven’t said a word about how quaint Cocoa is….the shops are lovely, and there are great choices for restaurants. Bob has done a great job with that!  I know I can be somewhat knitting possessed.  I’ve got a strange ache in my right upper arm, which I’ve never had before.  Must stop knitting angry and spend more time with the recipe for bliss!

This entry was posted in knitting. Bookmark the permalink.